Roger Burnett: If I had to, I’d put my money on McGuinness 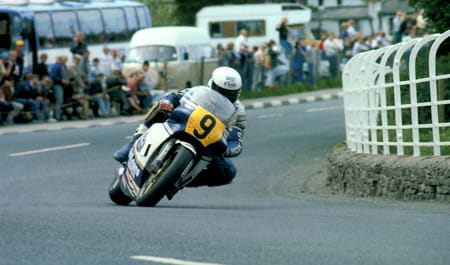 Roger Burnett is a motorcycle racing legend. Known for his success in the British and World 500cc Championships, World Endurance Championship, Le Mans, Spa and Bol d’Or, he counts victory at the Isle of Man TT as one of his biggest achievements.

We caught up with Roger to find out what it’s like to be a TT winner, which of today’s bikes he’d most like to ride on the island and where the best places to watch the races are…

Q. To win any professional motorcycle race takes some doing, but to win the TT is regarded by many as the ultimate race to win. What is it like doing a lap of the mountain course?

“To win requires careful thought – not just outright speed. All the same, you do obviously need to be competing with the fastest. I believe one of the reasons I won was due to my strategy when the bike was airborne.

“What I did when in the air, and what my team-mate and main rival Roger Marshall didn’t, was to neutralise the throttle in mid-air so when the rear wheel hits the ground, it isn’t spinning faster than it should be. If you keep the throttle on, the tarmac will have to slow the engine as the wheel hits the ground. This puts strain on the chain; consequently Roger [Marshall] had to spend more time than me in the pits!”

Q. If you were racing in this year’s TT, which bike would you choose to race on?

“I would probably choose to ride John McGuinness’ Honda because of its consistency this year. However if I couldn’t choose that one, I’d go for the Kawasaki.”

Q.  With the 2013 TT race week almost upon us, who do you think has the best chance of being successful come 7 June?

“Obviously because of his previous 19 TT wins, John Mcguinness will be the bookies' favourite. Personally, if I had to put money on it, I would go for him as well! However, there will always be the younger, up-and-coming talent there to challenge for the win and I think this year there is a real chance of that happening. I’d also rate Michael Dunlop and Bruce Anstey because of the good form they’ve shown this year.”

Q. Now that you’re a spectator, apart from the senior TT itself, what are you looking forward to most about the two weeks?

“I look forward the races themselves and the whole atmosphere that surrounds them most of all. I do enjoy the slower races because they are highly competitive and there is more of a level playing field; I particularly enjoy the Supersport races.”

Q. As you know, there are several different view points for fans to watch the action at the TT. Where would you say is the best place to be?

“As many people know, even as a fan there is an element of danger involved in spectating, which is probably one of the reasons why in the past the event has almost been stopped altogether. However, because you can get such a thrill even from spectating, the TT is a highlight, if not the highlight of the racing calendar. Personally I’d say one of the best places to be is Rhencullen, which is just north of Kirk Michael.”