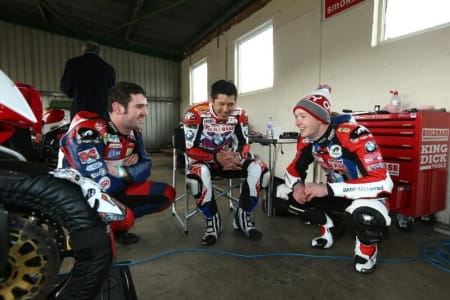 Ryuichi Kiyonari enjoyed his first ride on BMW’s S 1000 RR, according to team boss Stuart Hicken following a one day shakedown at Mallory Park on Wednesday.

Despite taking three podiums and securing a position in the showdown, Kiyonari had little more to celebrate in 2013 with the poor results clearly taking a toll on the man who used to be BSB’s most successful rider. Speaking in August last year, Kiyonari told Bike Social that he wasn’t interested in podiums or a showdown position, he just wanted to win again.

Kiyonari was present at Mallory Park alongside team mate James Westmoreland and BMW’s new roads signing, Michael Dunlop, for a shakedown test ahead of the official British Superbike tests getting underway next week. Kiyonari put in sixty laps at the Leicestershire circuit with sources suggesting he was impressively fast.

“Kiyo certainly enjoyed himself on Wednesday. He’s learning the bike at the moment. He’s only done sixty laps so we aren’t looking at times or anything we’re just getting him settle” said Hicken, speaking exclusively to Bike Social.

“The weather wasn’t the best; it’s not rained in two months so of course it would on the day of our first test! He was happy, he jumped on the BMW and we didn’t need to alter anything for him. He just went out and got on with it and we’re very pleased with his sixty laps.”

“What impressed me was that Kiyo rode the bike exactly as it was when we turned up with it, handle bar position, clutch, throttle, gear levers etc. so we were pleased about that! It can be a pain fiddling about with funny handle bar positions and things like that but no, he just got on the bike and got on with it.”

2013 was Buildbase BMW’s most successful season in British Superbike to date, with James Westmoreland bagging a place in the showdown after a stunning ride at Donington Park from the S 1000 R’s first pole position. However with the BMW team yet to take a podium in the class, there is still room for improvement.

“I think we have the capability of challenging for podiums and victories in British Superbikes this year, we’ve done it before the BMW days but you certainly can’t do it without the riders.” Hicken continued. “My rider line up this year is as good as it’s been since 2004 so we need to do it again.”

A number of British Superbike teams have been out in Spain over the past month to test in more favourable weather conditions, but Hicken was content with the Buildbase squad sticking on UK soil and saving money in the process.

“I’ve never bothered with Spain, we don’t race there” explained Hicken. “Young Lee went out to get some miles on his bike but really, I don’t see any reason why you’d want to go there and spend £15,000 and leave yourself short for the end of the season! I want my riders to be used to riding with cold hands and in wet conditions with little grip because come Brands, it isn’t going to be ninety degrees there!

We’re at Donington next week and then Snetterton the week after for the official tests and depending on how we get on there we may pop out again but if we do Donington and Snetterton and get good mileage there then we’ll be happy enough.”