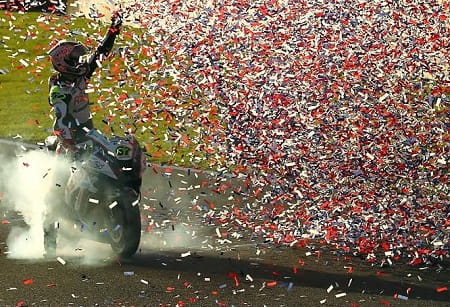 Shane Byrne has said that the circumstances in which he won a record fourth British Superbike title ‘weren't ideal’ after his championship rival Ryuichi Kiyonari withdrew from the weekend’s races after fracturing his collarbone on Saturday morning.

Byrne and Kiyonari were separated by just twelve points ahead of the final round of the 2014 championship at Brands Hatch and after two intense, close races at Silverstone fans were expecting quite the showdown.

However Kiyonari dramatically crashed out of a wet practice session on Saturday morning sustaining a broken collarbone and subsequently sitting out of the rest of the day’s sessions, including the first of three races. Byrne went on to crash out of said race, meaning Kiyonari could still have a shot at the title should he join the grid for Sunday’s second race but with conditions similar to those in which he crashed, the Japanese rider opted not to race. Finishing fourth, Byrne took the title with one race to spare.

“The circumstances in which I won this championship aren’t ideal” said Byrne. “I’d have loved for Kiyo to be out there with me and fighting with him over the three races. We had a tiny points advantage over him and it was just us who could win the championship and the fitting thing was that we’d both won three before so whoever did it would be the first to win four. 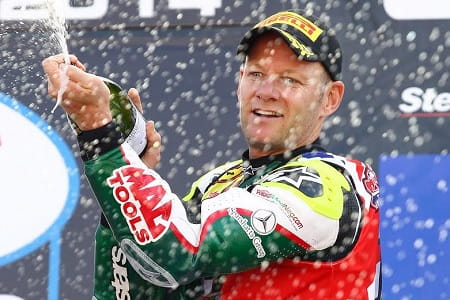 “I came here with a 12 point advantage and started the showdown with a 27 point advantage after having a huge lead before that. I said at Donington that 27 points is nothing, one mechanical, one crash, one anything and those points would be gone. After crashing in Assen and then again yesterday it made Sunday really difficult. I didn’t know until the last minute that Kiyo wasn’t going to ride and he’s exactly the same as me, a three time British Superbike Champion, so for he and I to fight for the fourth championship was really fitting. Don’t get me wrong it would have been great to fight with Tommy [Bridewell] or James [Ellison] or someone like that but it was just really fitting to battle with Kiyo. We came here twelve points apart and it’d have been great for us to have two or three great races and I’m sure he’d have made things more difficult! I wanted to go out and win two races and fortunately I got that job done, my only worry now is that he’ll come back even stronger next season!”

It was a tough weekend for Byrne, in the post-qualifying press conference he had clashed with fellow competitor Josh Brookes after the Australian accused him of having no bad luck. The Rapid Solicitors Kawasaki man had a simple reply after winning the championship, however:

“Some of my competitors sit there gobbing off about luck or whatever else but you aren’t going to win a championship sitting on the floor. You need to be on the podium; you need to be consistent and whilst I wasn’t winning when Kiyo was, I was always second or third.”