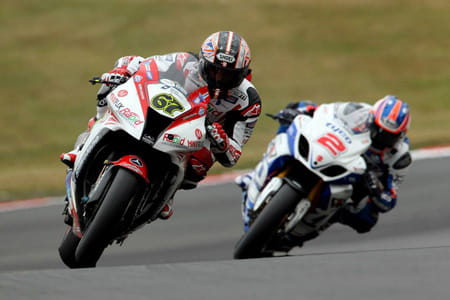 Despite the threatening of rain, race day at the sixth round of the British Superbike Championship was full of sunshine at Brands Hatch. Starting from pole, local boy Shane Byrne took the holeshot into the first corner however it wasn’t long until he was overtaken by the rapid Samsung Honda of Alex Lowes. Tyco Suzuki’s Josh Brookes was in close contention from the off, passing favourite, Byrne on the second lap and hitting the front by lap four.

Byrne – clearly not wanting to be beaten at his home track – challenged Lowes’ second place however the Lincolnshire man gave the three-time champion as good as he got as a serious battle ensued for second place.

As ever at Brands Hatch, Byrne got his way eventually and began to charge to the front where he began to line up his attack on Brookes. The thirty-six year old began to make a move into Hawthorns, although lost the front end of his Kawasaki ZX10R in quite a fashion, going down hard. This left Brookes and Lowes in contention for the win, as Kiyonari in third was some five seconds behind. Lowes struggled to match Brookes’ pace and the Australian went on to take his first victory of the season. James Westmoreland finished fourth from a career-best fifth for PJ Jacobsen.

In race two, Byrne again got a strong start this time from Ellison, who having set the fastest lap in race one, started on pole position. Byrne and Ellison began to pull away with Lowes close behind however everybody was forced to bunch up as the safety car came out due to an incident involving Lee Costello.

Byrne controlled the pack as they set off again; catching Ellison slightly off guard he managed to build a bit of a lead. The Cumbrian was never far behind Byrne though and it looked as if he had the potential to make a pass on the last lap although it never came, leaving Byrne to take his 49th British Superbike victory. Lowes crossed the line in third. Race one’s winner, Josh Brookes could only manage fourth in the second race ahead of Samsung Honda’s Kiyonari in fifth.