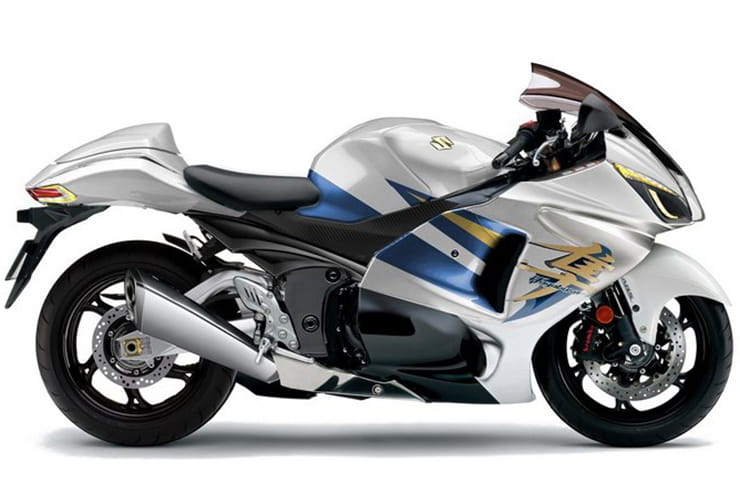 Suzuki has had a couple of quiet years. While the firm made headlines in late 2016 when it launched a barrage of new models including the GSX-R1000, GSX-250R, GSX-R125 and GSX-S125, it’s little new to shout about since then.

In 2017, Suzuki’s new model launches amounted to little more than the SV650X, itself merely a warmed-over SV650, and last year the sum total of Suzuki’s road bike news was the launch of the reborn Katana, which is really just a reskinned version of the GSX-S1000. And while it will go on sale this year, the Katana is officially a 2020 model, which means there’s actually nothing at all new for the ‘2019’ range.

Worse still, its European line-up for 2019 has been eviscerated with the loss of legendary machines including the Hayabusa, GSX-R750 and GSX-R600 – all victims of European type-approval legislation.

But while Suzuki didn’t have much to reveal at last year’s big bike shows, the firm has promised that the quiet period is coming to an end. Speaking at the new Katana’s October unveiling, Suzuki President Toshihiro Suzuki said: “Our role at Suzuki is to create products people need, bringing a source of fun and excitement into their lives. The all-new Katana is a great demonstration of Suzuki’s future. There is much more to come from Suzuki, as we maintain our customer-focussed perspective and bring innovative and exciting motorcycles to people around the world. By the year 2021, we plan to launch 10 new models, focussing particularly on large bikes, and strengthen our overall line-up and create new series from existing models.”

So, what could those new bikes be? Here’s the evidence so far… 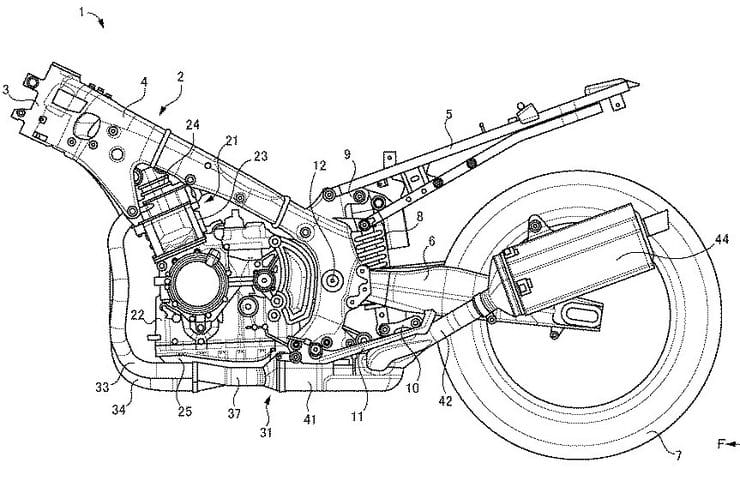 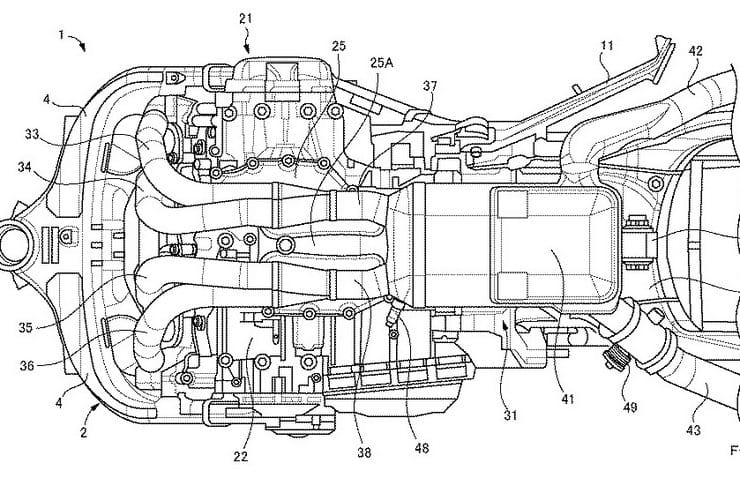 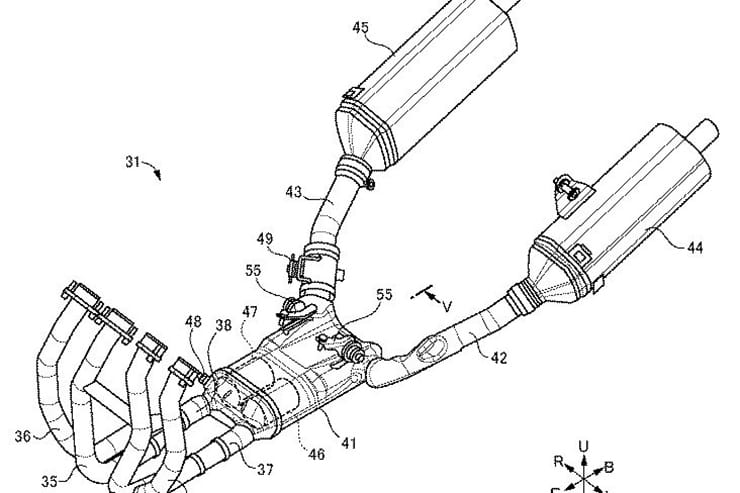 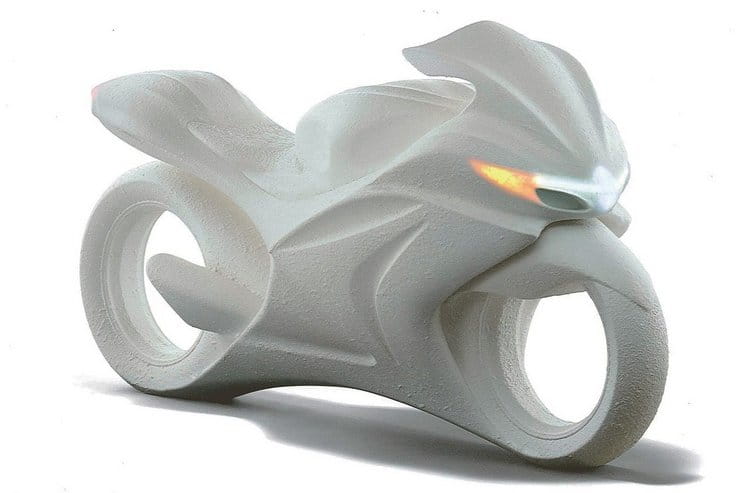 Of course, with some 10 months to go before Suzuki unveils its full 2020 model range, let alone the 2021 line-up, the firm isn’t spilling the beans on everything to expect – but one machine that’s sure to be part of the 10-new-model plan is the long-awaited Hayabusa replacement.

But what technology will it feature?

Our information is that the bike will get an updated, enlarged version of the existing engine, punched out to around 1440cc to make well over 200hp, and that it will be bolted to a completely new frame. And now Suzuki has filed a patent application that might just give us a glimpse of that new chassis.

The patent application, published in Japan towards the end of December 2018, is related to a fairly boring innovation involving the design of an exhaust pipe incorporating catalytic converters into a resonator box under the engine. What’s notable is that the exhaust system is a distinctly Busa-like one, connecting a large four-cylinder engine to a pair of large silencers – one each side of the bike – a classic Hayabusa hallmark.

Given that emissions are the GSX1300R’s biggest stumbling block when it comes to European sales, the new exhaust is a vital addition to the bike, and digging deeper the patent application reveals further clues that it’s showing us the next-generation Hayabusa.

A side-on image shows an unfamiliar aluminium beam frame, but underneath it hangs an engine that shares the same mounting bracket points and general outline as the existing Hayabusa motor. There are changes to the casting of the cylinder head, but that’s to be expected since our information is that the bike’s motor will be a heavily updated version of the existing design. A third drawing shows the underside of the engine, which again matches the layout of the existing Busa motor.

The frame shown in the patent application is much like that of a modern superbike than the existing Hayabusa’s somewhat bulky beam chassis. The rails are slimmer and more sculpted, mirroring the way the GSX-R1000’s chassis has evolved over the years. Behind it sits a new swingarm, with a shape that suggests it’s cast aluminium rather than the extruded and welded alloy of the existing Hayabusa’s equivalent part.

Although there’s no sign of any bodywork, the new chassis clearly includes side-mounted air intake ducts rather than a through-headstock design. Again, that fits what we’re expecting from the next-gen Hayabusa, which is likely to have styling that reflects the design of the Concept GSX styling study that was revealed at the 2015 Tokyo Motor Show.

Although unable to confirm the plans for the new bike, Paul de Lusignan, Suzuki GB general manager, said: “The Hayabusa was a game-changer when it was released 20 years ago, and a real statement of intent from Suzuki to challenge our rivals and beat them. It’s gone on to become a real icon and a symbol of power, speed, and acceleration, and you only have to look at drag strips to see it’s still hugely popular with riders chasing speed with reliability, something we’re very proud of.

“Our engineers are continuing to develop new and exciting models that will be introduced over the next few years. Personally, as someone who has covered thousands of miles on Hayabusas over the years, I am keeping my fingers crossed for a new one, too.” 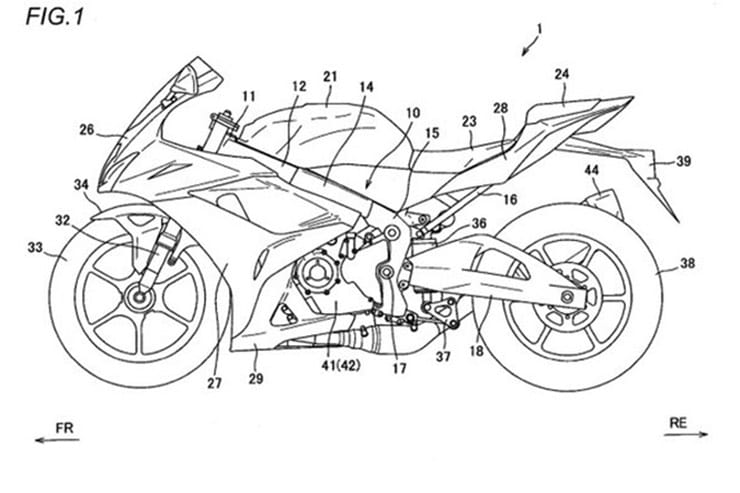 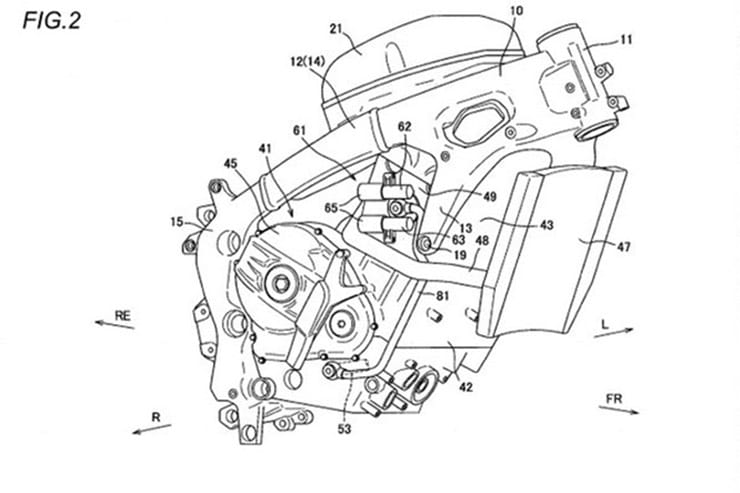 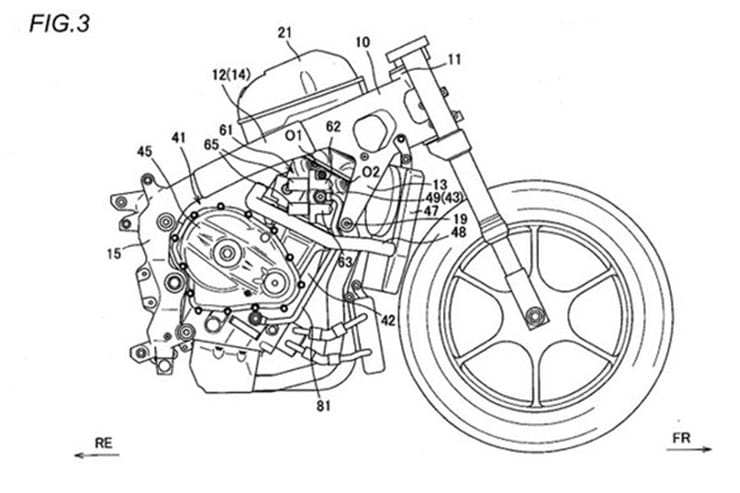 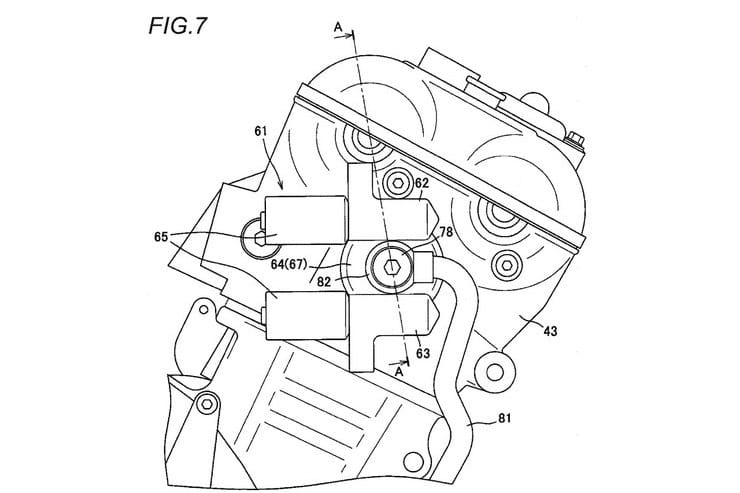 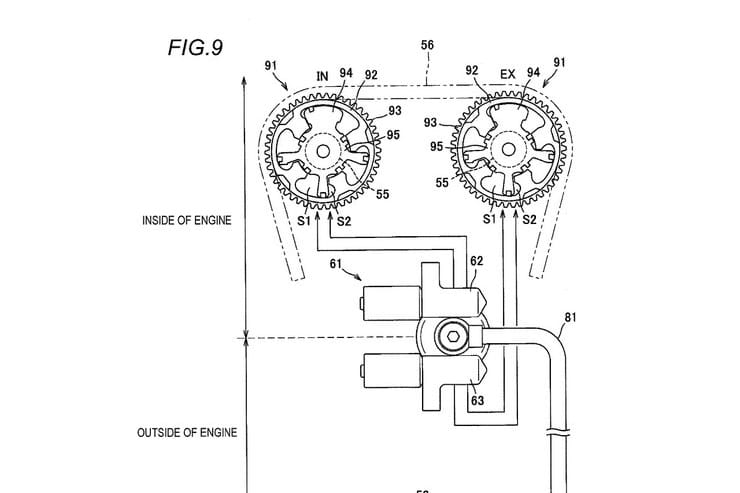 Given that the 2017-on GSX-R1000 was the last really exciting, all-new bike that Suzuki launched it might seem too soon for it to be getting an overhaul just yet – but another new patent application from the firm suggests there are updates waiting in the wings.

At the moment, the GSX-R1000’s VVT uses centrifugal force as the key to its operation. As the intake camshaft spins faster, metal balls inside a cam phasing device attached to the camshaft’s drive sprocket are force outwards. As the balls move towards the outer edge, the camshaft’s timing is advanced in relation to the sprocket. It’s a clever system that was developed for the GSX-RR MotoGP race bike because in MotoGP hydraulic or electronic VVT systems are banned.

But clever though it is, it lacks the controllability of a hydraulic cam-phasing system like the one Ducati uses on the Multistrada and Diavel DVT models.

Suzuki’s latest patent application shows an unmistakable outline of the GSX-R1000 and its engine, but with a hydraulic cam-phasing system just like the one used by Ducati and countless modern cars. Unlike the existing bike’s mechanical system which operates only on the intake side, the one in the new patent works on both the intake and exhaust camshafts to give more flexibility. And since it uses electronic solenoids to govern oil flow into the cam-phasing units, where it alters the camshafts positions in relation to their sprockets, the system can be controlled by the bike’s engine management rather than relying purely on physics like the existing GSX-R1000’s setup.

The result should be improvements in peak power, low- and mid-range torque, economy and emissions; a spectacular haul in the closely-fought superbike arena. And with Euro5 emissions limits set to be imposed in the lifespan of the GSX-R1000, the new design might even be required to keep it on sale.

Of course, BMW’s 2019 S1000RR has already taken the idea of VVT on a superbike a step further, adding variable valve lift and duration as well as timing, and Honda has also recently filed patent applications for a variable-valve Fireblade. It looks like variable valve timing is going to be one of the big areas of progress in future sports bikes as emissions rules get tougher. 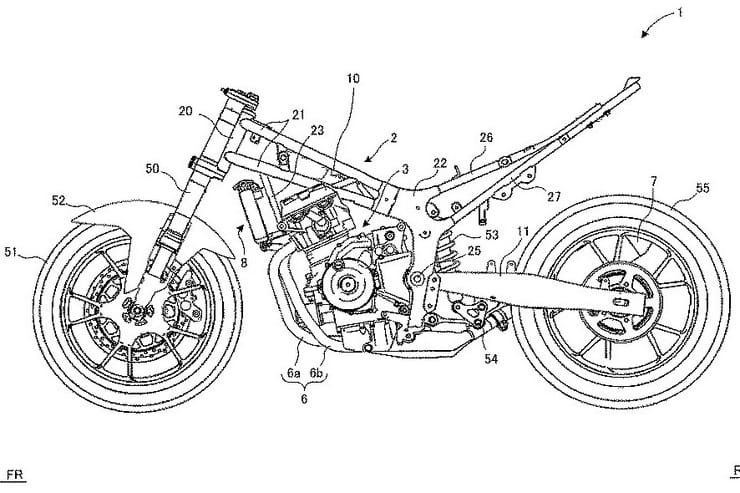 Early last year, Suzuki filed patent applications that gave us our first glimpse of the upcoming GSX-R300 mini sports bike – and while we’re still waiting for its official unveiling the firm has now applied for even more patents, including images that show the bike’s engine and chassis more clearly than before.

Powered by a new DOHC parallel twin, the GSX-R300 is going to be a much higher-spec machine than the bargain-basement GSX250R, which uses the ancient, low-powered twin from the old Inazuma naked bike.

The new bike’s motor will be a shorter-stroke, higher-revving and higher-powered design, mounted in a tubular steel, trellis-style frame and wrapped in fully enclosed bodywork. A naked GSX-S300 is also expected.

The new patent applications relate to the bike’s cooling system, which includes a ducted radiator fan to allow it to use a smaller radiator more efficiently. The fan and its duct covers the centre section of the rear of the radiator, where airflow would normally be interrupted by the engine’s cylinder head just behind it. The fan drags air through the radiator and pushes it downwards onto the exhaust headers. It’s not an earth-shattering technical innovation, but the patent application shows that development of the GSX-R300 is still well underway. 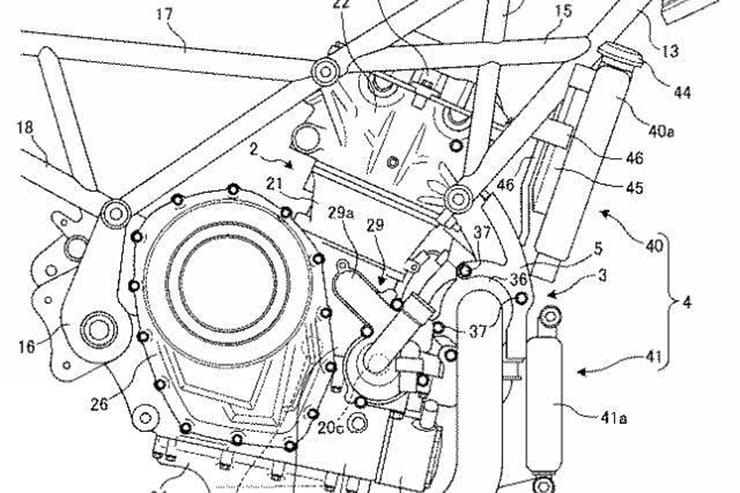 One new Suzuki that’s been the focus of dozens of patent applications over the last few years is the planned turbocharged parallel twin-cylinder machine that began life as the Recursion concept bike back in 2013.

And while that seems a long time ago, the flow of new patent applications about the model is continuing unabated, with yet more being published by the Japanese patent office in November last year.

There’s now an enormous repository of detail about the bike, which has evolved from the Recursion’s original design with a 588cc, SOHC turbo twin making 100hp, into a DOHC, 700cc design, probably capable of 150bhp or more.

The latest patent applications show details of the bike’s fuel injectors and inlet tracts, plus its ride-by-wire throttle butterflies and the layout of the pressurised airbox, fed by the single turbocharger tucked in front of the engine.

However, the schedule for the bike’s launch appears to remain a mystery, with our Suzuki insiders now suggesting that the turbo machine isn’t one of the 10 new models planned between now and 2021. It’s clearly still under development, as proved by the continuing flow of patents, but presumably the challenge of developing turbo technology to work on a modern motorcycle is a significant one, perhaps enough to push the bike back to 2022 or beyond – nearly a decade on from the original concept’s 2013 showing.