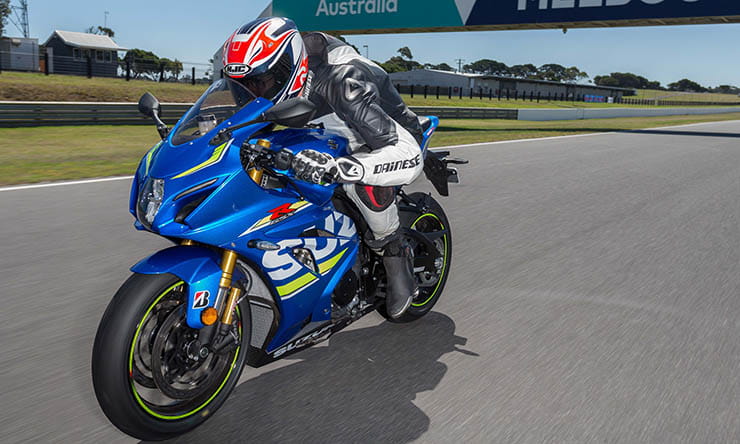 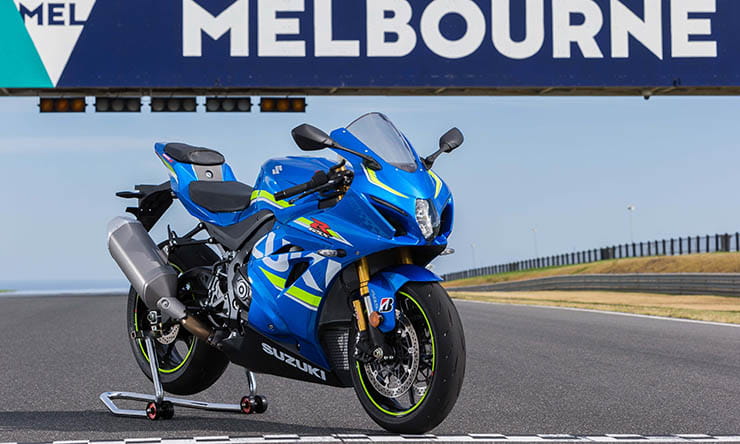 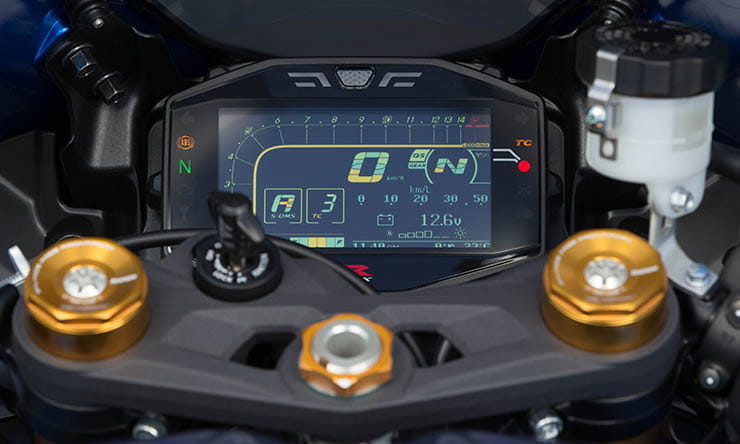 The venue and cast list confirmed just how important this latest GSX-R1000 is to Suzuki. A few weeks earlier, Honda had launched the new Fireblade at Portimao, one of Europe’s best circuits, with Freddie Spencer and John McGuinness in attendance. Suzuki’s reply: hire Phillip Island, another of the world’s great tracks, and invite Kevin Schwantz and John Reynolds to show us the way round.

I wouldn’t attempt to say which firm won that little scrap for glamour and star quality; you can make your own mind up about that. But as triple British superbike champ Reynolds pulls into the pit lane after leading the way for the first couple of afternoon laps of the Australian circuit, and I keep the GSX-R’s throttle pinned along the next short straight, it’s clear that this bike is a huge step forward for Suzuki’s flagship sports bike.

Just before the final turn I flick clutchlessly into fourth, then tip the bike into the long final left-hander, the GSX-R feeling superbly taut and precise as I apex at the marshal’s box on the inside of the bend, and wind back the throttle to send the bike shooting up the hill and down the start-finish Gardner straight. Moments later I’m in fifth, head behind the bubble, then clicking into top and heading for around 180mph at a rate that the old model couldn’t have matched.

That was certainly Suzuki’s aim, in developing what they claim is the “most powerful, hardest-accelerating, cleanest-running” GSX-R ever built, as well as the most compact, aerodynamic and best-handling. The new engine plays a huge part in that. It has shorter-stroke dimensions, higher compression ratio, new valve operating system (finger followers instead of bucket tappets), and does without a balancer shaft.

A new, ride-by-wire intake system (with shorter, wider and more compact throttle bodies, and stacked intake funnel arrangement) and revised ram-air system also help. So does the new exhaust system, most visible for its large single silencer but also featuring Suzuki Exhaust Tuning-Alpha: pipes with rev-dependent valves connecting the downpipes of cylinders one and four, and two and three. The result of all that is an increase in rev limit from 13,500rpm to 14,500rpm, and a 17bhp jump in peak output to 199bhp (202PS) at 13,200rpm. 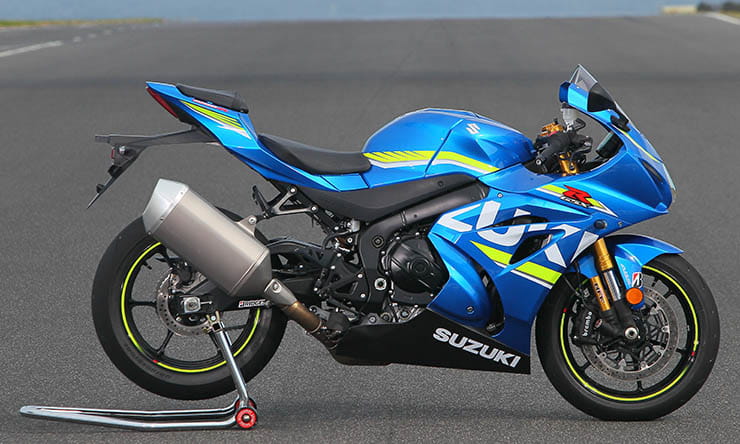 The chassis also owes plenty to Suzuki’s MotoGP effort, most obviously in the frame design, which has less extensive side sections and is 20mm narrower at its widest point, as well as ten per cent lighter than the outgoing model. A simpler aluminium rear subframe saves a kilo; the swing-arm is stiffened with bracing on both sides instead of just one. Rotating the engine back in the frame by six degrees allows its centre of mass to be moved forward by 20mm, combining with the 15mm longer wheelbase to put more weight over the front wheel.

Steering geometry is a touch steeper; suspension is still from Showa. The standard bike gets Big Piston Forks and revised, multi-adjustable shock, while the R-model wears BFF (Balance Free Front) forks with big, racing-style remote reservoirs, and a BRFC lite (Balance Free Rear Cushion lite) shock, which is lighter than the standard unit and has more sophisticated damping.

Brakes continue with Brembo monobloc calipers up front, now biting larger, 320mm diameter discs and equipped, in the R-bike’s case, with cornering ABS linked to the Inertial Measurement Unit. This also controls the traction control system, shared by both models, which is adjustable through ten positions, of which four are intended for track use, four for dry roads and two for rain.

The bikes at Phillip Island were all GSX-R1000Rs, complete with neatly cut-away top yoke and an LCD instrument panel, plus the MotoGP-inspired blue paint scheme that’s an option on both models. The unchanged riding position helped the bike feel like a GSX-R but the engine immediately seemed stronger, punching through the midrange and kicking harder up top, revving towards that higher 14,500rpm limit almost as fast as I could quick-shift through the typically slick gearbox. 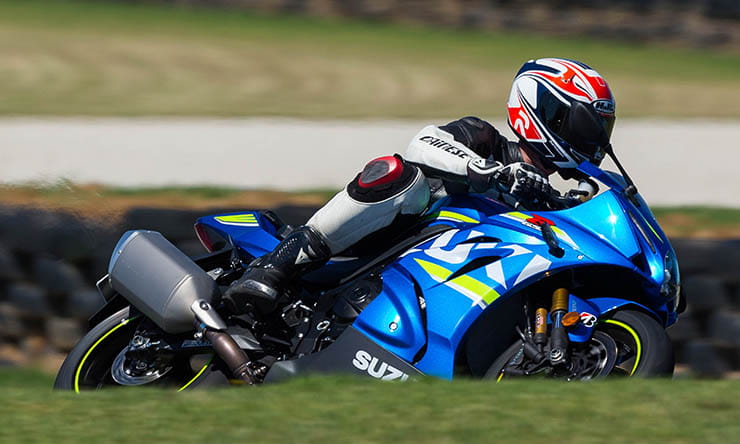 Fuelling was very sweet, too; so much so that I wasn’t tempted to use the two softer riding modes, both of which give a less immediate throttle response while keeping that 199-horse maximum. The traction control system worked well, too. I mostly kept it on level two, and was glad of it by the second session, when I’d pretty much relearned the track and the standard-fitment rear Bridgestone RS10 was starting to slide around in the 30-degree Aussie heat.

Dropping the pressure helped give a bit more grip for the next session, and I also added some shock preload to suit my larger than average body (both ends had already been firmed up slightly to Suzuki’s “track” settings), and added a touch of fork rebound to stabilise the front end as I released the brake. But these were minor tweaks on a bike that was already handling superbly, and which was better still after lunch with the extra grip provided by stickier R10 racing rubber.

At 203kg wet the GSX-R’s not quite as light as some rivals but it steered sharply, and stayed impressively stable even under hard acceleration or braking. Those anchors did their job, too; perhaps not having quite the initial bite of Brembo M50 Monoblocs, but stopping hard and delivering plenty of feel. The ABS also worked very well even on track – so much so that although Suzuki had offered to disable it (which can’t officially be done) for the afternoon sessions, I and most other riders left it on all day.

Being tall, I was also glad to find that the GSX-R’s unchanged riding position gave sufficient leg-room and I didn’t feel cramped or struggle to get my feet in the right place on the pegs, as sometimes happens with ultra-compact modern sports bikes. I also didn’t notice the vibration that one or two riders mentioned; perhaps you would on a motorway but the Suzuki felt smooth to me and I’d happily have carried on lapping until the tank ran dry.

It isn’t just stunningly fast and agile and impressively easy to ride, it has a raspy edge to its exhaust note and manages to balance its new-found refinement with an addictive chunk of old-school GSX-R character. It’s the most significant revamp yet of Suzuki’s mighty warlord; and one that pitches it right back into the battle.

The main conclusion was always likely after simply reading the GSX-R1000R’s spec sheet: it’s right up there scrapping in the increasingly large gang of 200bhp, IMU-enabled litre-capacity sports bikes. Whether it’s quickest of the lot might come down to circuit, rider preference or what tyres are fitted, but this GSX-R will surely be in contention in a way that its recent predecessors simply haven’t been.

My gut feeling is that its relatively roomy size would mean that I could ride it quicker for longer than most rivals on track, though smaller riders might find more compact alternatives even more manoeuvrable and just as fast. What’s for sure is that the GSX-R1000R’s price of £16,099 looks very keen for such a well-equipped bike, albeit one without some more expensive rivals’ semi-active suspension systems. And the base-model GSX-R1000, which arrives first in March (the R follows in May) is also competitively priced at £13,249.