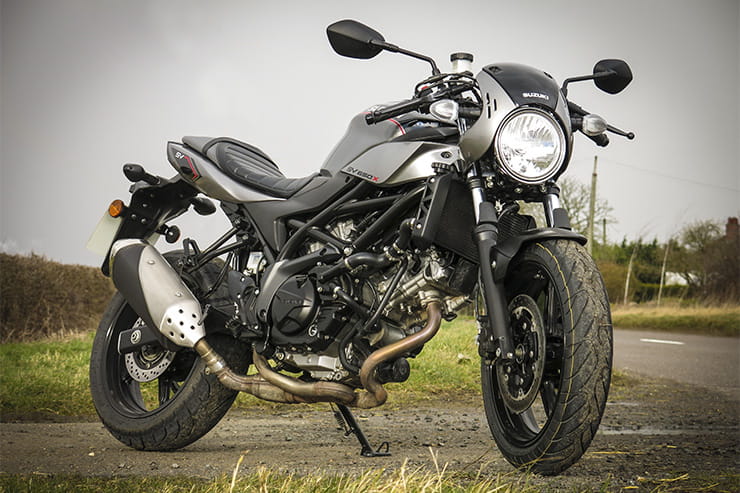 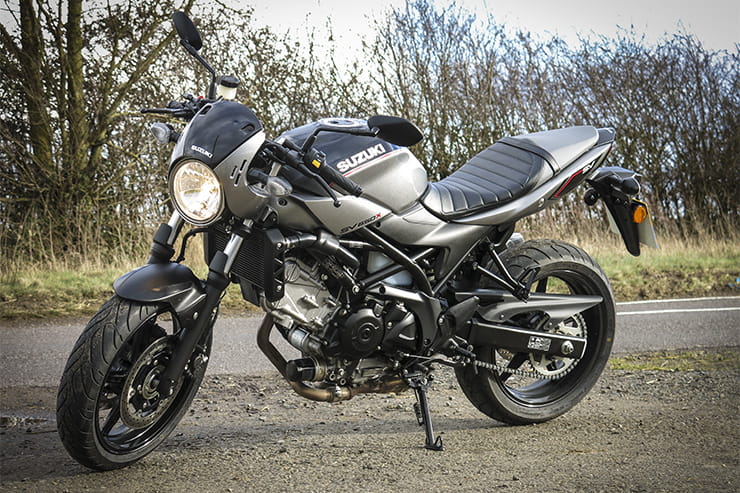 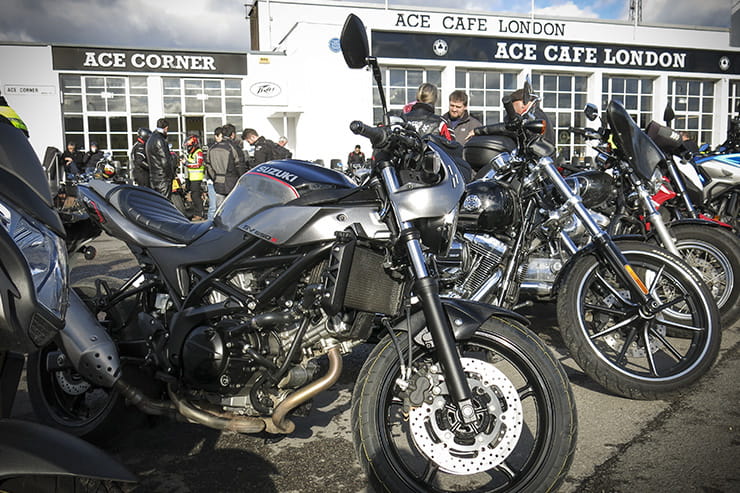 At just £5,999, the new Suzuki SV650X has a £300 premium over its naked sibling, the SV650. The extra money gets you lowered clip-on bars, a nose cowl, side panels and a redesigned seat. Even at this increased price it offers very good value when compared to one of its closest rivals – the £6,349 Yamaha MT-07.

With a V-twin engine putting out a claimed 75bhp (a fraction up on the MT-07’s 73.8bhp), there’s a degree of character to the little Suzuki that’s lacking in some other machines, and a well-ridden SV650 will easily put many higher-performance sportsbikes to shame on Britain’s roads.

£5,999 is a great price for a new bike in the current economic climate. The SV650X is of course based on the SV650 – which was itself born from the original SV of 1999, that went through a brief period as the Gladius. A modular approach to manufacturing is nothing new.

While pundits are quick to criticise Suzuki at times for using ‘old’ technology, I prefer to think of the company wisely avoiding ‘fixing’ something that ain’t broke. The GSX-S750 is a good example of a machine using engine technology from over 10 years ago, and being all the better for it.

The standard SV650 is just £5699, so besides the more tucked riding position offered by the café racer X model, you are paying for the styling, as the chassis and engine are the same. 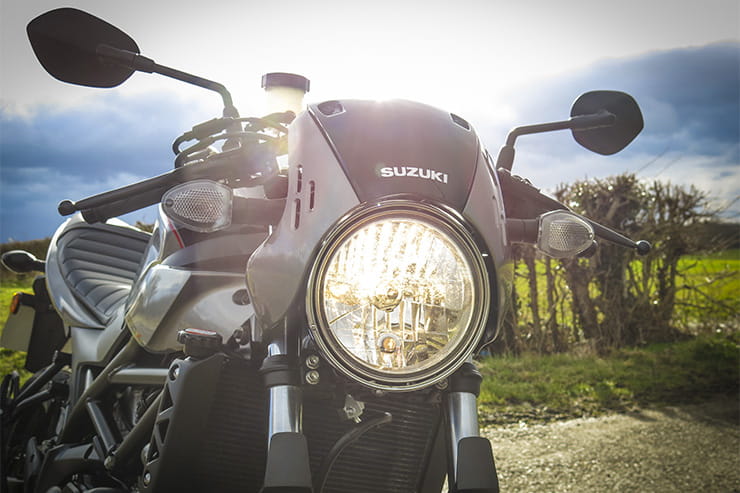 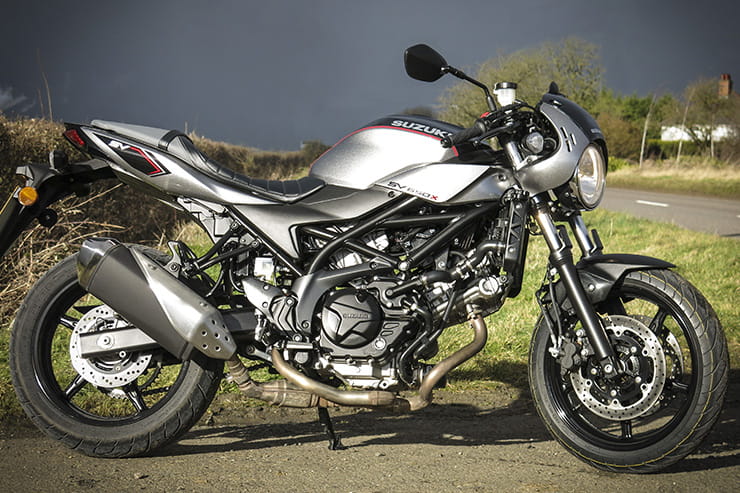 The 645cc 90° V-twin in the Suzuki is a liquid-cooled DOHC unit. It’s similar in many ways to the engine used in the first generation of SVs, though fuel injection and twin spark plugs in each cylinder has seen power increase from the first bike’s 64.2bhp @ 9,000rpm and 42.3lb-ft @ 7,200rpm.

Being a V-twin, it has a pleasing character – at idle there’s a distinctive thump-thump feel, and while the muted exhaust spoils what could be an exciting bark, there’s a noticeably deep tone when riding through built-up areas. Over my 180mile test ride, the Suzuki seemed to come alive more towards the end. It had only done 56miles when I took it out, and perhaps it was just the differing roads, but it certainly seemed to open up a little.

But I can’t help thinking that Suzuki could have worked on the overall sound a little more – Euro 4 dictates the overall volume of a bike, so some manufacturers focus on the induction sound, while others look at the exhaust. The water-sleeved motor is mechanically fairly quiet, so it would have been good to have had a little more attitude from the machine. Still, with the likes of PipeWerx making end-cans from £140, it’s not going to cost too much to give a bit more of a roar.

The gearbox is smooth and precise – clutchless up-shifts are easy, with only a little more resistance being apparent from fifth to sixth. And this is an engine that really benefits from being worked. 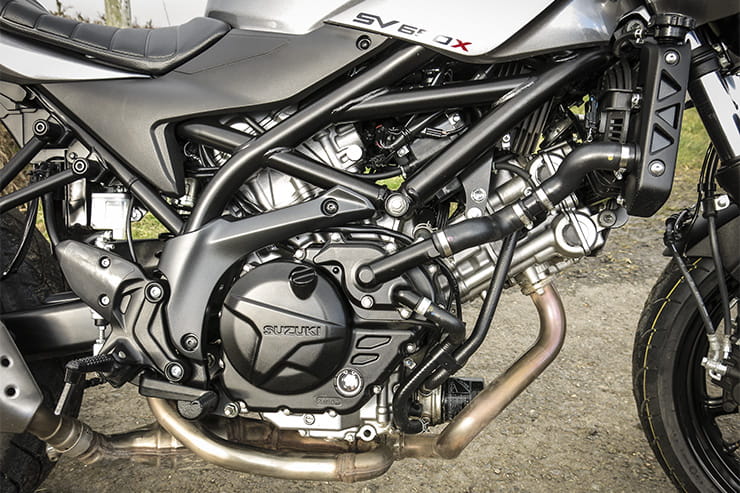 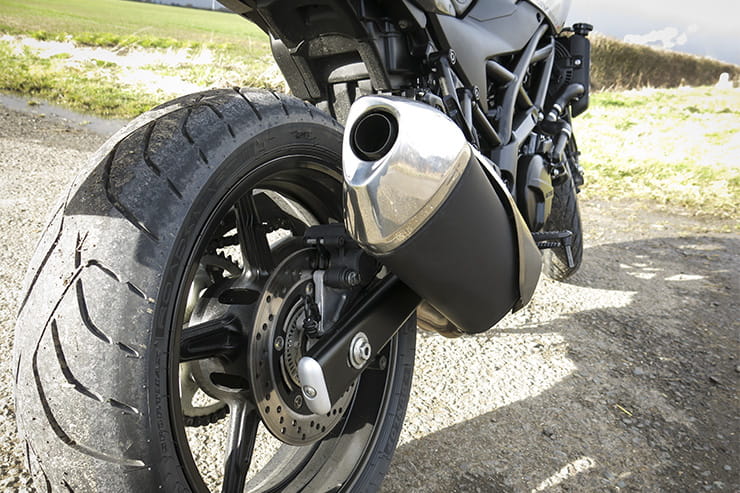 The engine’s a proven design, and loses nothing for its relative age

Hacking down a motorway, the engine is fine – there’s never a point where you feel it’s underpowered, but a big tourer it is not; there’s simply not the grunt to lazily drive past other vehicles without at least one or two taps of the gear lever. It’s more suited to town work, and while the motor loves to be revved, it’s got enough low down to pull confidently from the lights without any fear of stalling (something my GSX-S750’s four-cylinder motor sometimes struggles with).

On back roads is where this engine really excels – it genuinely feels like a completely different machine. While it’s not got super-bike performance by any stretch of the imagination, the SV engine is an absolute joy, truly coming to life as you pin the throttle open and work the ’box. Gone is the so-so feeling on the dual carriageways as you blast past cars and drive out of corners with the throttle held wide open.

Because it’s ‘only’ making 75bhp, there’s a real chance to feel like you’re working the bike, rather than it hinting at top-end performance as a super-bike does, but never being able to really stretch its legs on the road. Not to mention the fact that, when I got caught in an unexpected snow storm, I didn’t feel I was riding a bike that wanted to catapult me off in an instant of misjudged throttle movement. 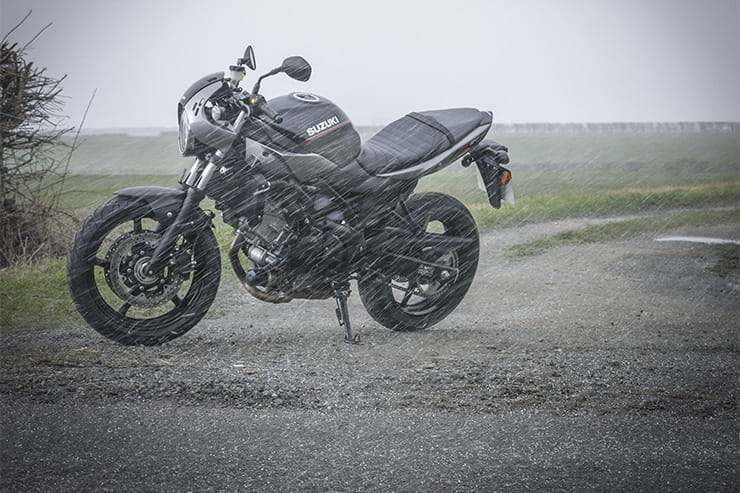 200bhp is no use in a hail and snow storm

Suzuki claims up to 72.43mpg – on my route, which took in motorways, more minor roads and twisting back lanes, I saw 47.0mpg. This was helped by having to rein some of the ride in for the snow storm, but you would need to ride pretty sedately to see much over 55mpg. And where’s the fun in that on a bike that’s so enjoyable to work hard? 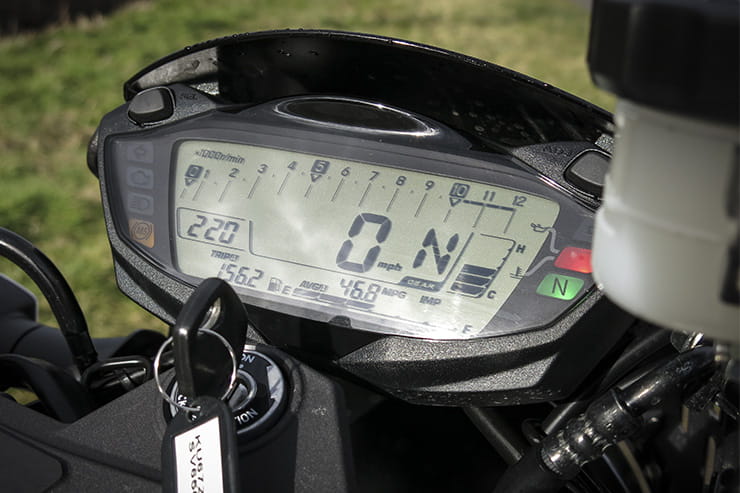 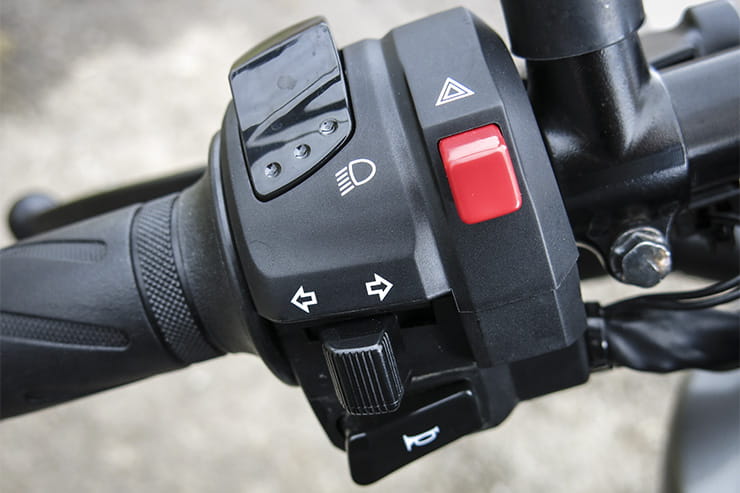 The forks and single rear shock are adjustable only for preload, but they’re fine for a machine like this. I weigh about 13 stone and found the SV650X to be compliant and never too harsh. Some pot holes would jar a little, though the riding position helps to damp any shocks through your legs. Carrying Dunlop RoadSmart III sport-touring tyres, the bike felt neutral and easy to use, with far more potential than the often damp roads I experienced would allow.

Ready to ride, Suzuki claims the SV650X is 198kg, which is 17kg more than the MT-07, but it never feels too much. Physically smaller machines like this are easy to move around, and while weight savings could no doubt be made, they likely couldn’t be done within this price.

The twin front discs are bitten by Tokico two-piston sliding calipers. They’re old-school and work fine, but don’t expect the immediacy and power of the latest radially-mounted monoblocs. ABS is fitted front and rear, as on all new bikes over 125cc. 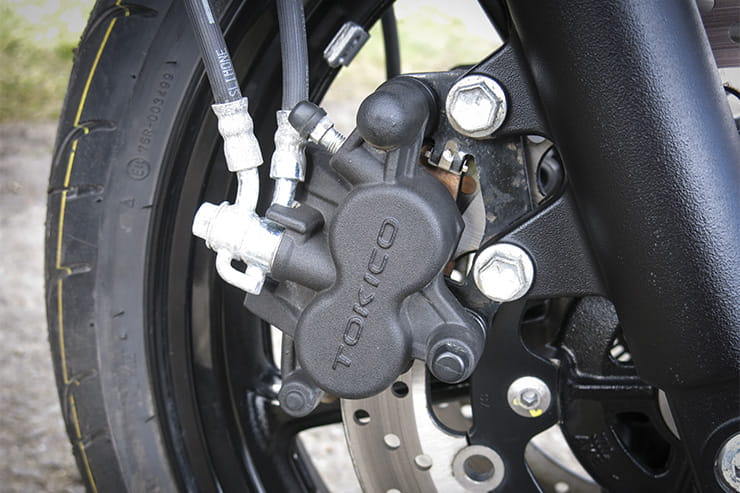 The X version’s ‘tuck and roll’ seat is said to have soft cushioning to help relieve rider fatigue. While the Rukka Navigatorr trousers I was wearing do have a padded bum that helps, it was my hips that started to ache first on the SV650X. The seat is 790mm off the ground, which is 5mm higher than the standard model, but combined with the much lower set bars, I did find it a slightly cramped riding position. It wasn’t a problem on any of the roads I took in, and certainly not on country lanes, where you tend to move around more, but if you’re just going to be using this for a daily commute, I’d recommend the version without the dropped clip-on bars.

The peg to seat height was the main reason I felt a little more scrunched up – at 5’10” I’m an average height, and while this is far from the hip-popping discomfort of a BMW S1000RR, much taller riders would be well advised to give one a test ride before deciding if it’s right for them. 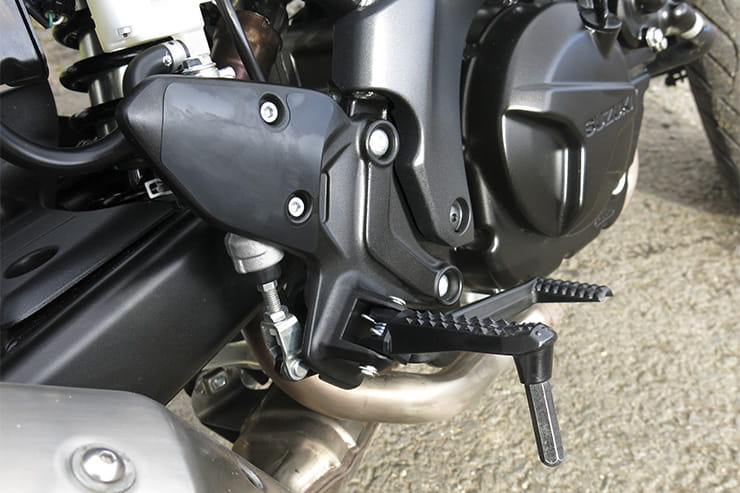 The LCD dash is the same as that on my long-term-test GSX-S750, showing the usual revs, speed, fuel level, clock and two trips, as well as gear position, range to empty, and current and average economy. They’re well laid out, but I found them slightly harder to read on this bike when heading towards a low sun.

Also fitted is the great one-touch start that fires the bike up with a quick tap of the button. It sounds irrelevant, but you miss it on machines that don’t have it.

The mirrors seem to be lifted from my GSX-S too, but here they seem to stick out even further. I’ve clipped a car with my bigger Suzuki’s mirrors before when filtering (fortunately it was a very understanding driver who kindly just asked me to pop his mirror back into its socket before waving and carrying on), but with the narrow form of the SV so suited to carving through London’s tight traffic, I was disappointed to be put off by the extra width. Fortunately, by rotating them through 90°, you can make a significant saving. But then they look daft. I’d have loved to have seen some round mirrors that didn’t extend out so far – I reckon they’d have been more in keeping with the styling of the bike too. 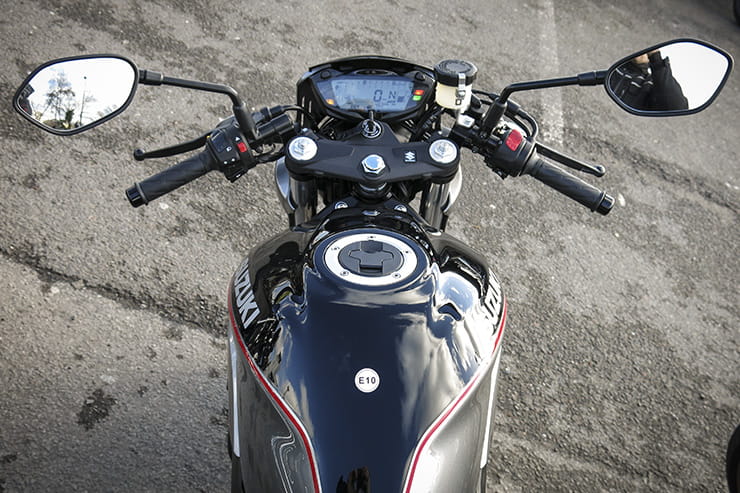 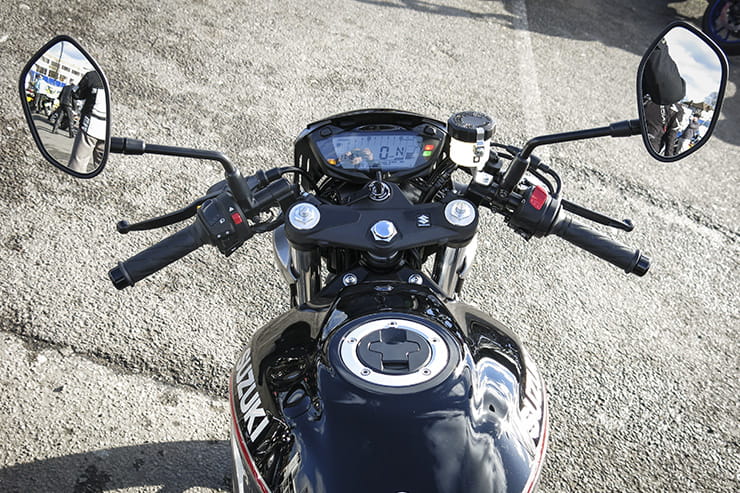 You’d be daft to expect too much from a new bike at this price, but the finish and build quality is fine. My only slight concern was over the brake caliper banjo fittings, which were showing some signs of pitting when I got the bike – it’d likely been used by a less caring journalist before I had it (and judging by the miles on it, left standing for most of the time they had it).

Sure, the Suzuki SV650X is a great beginner’s bike – it’s unintimidating, has a low seat, and is relatively affordable. But I’d also say it’s a brilliant machine for someone with experience. Someone wiser, who knows the limitations of riding British roads in the new millennium. Ride it well and you’ll leave a large proportion of other, far more powerful bikes behind thanks to the nimble chassis and enthusiastic engine.

The look might not be for everyone – personally I think it’s a great machine but I’d probably still go for the standard model as I prefer the riding position. But whichever style you go for, Suzuki’s SV always was, and still very much is, a hugely rewarding, great value bike. 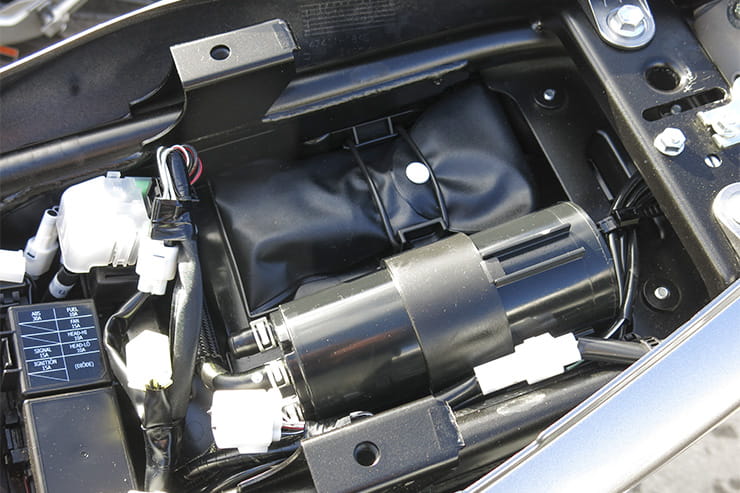 There’s a bit of space under the seat, but there’d be more if it weren’t for that carbon canister

Three things I loved about the Suzuki SV650X…

• Some signs of corrosion on brake fittings