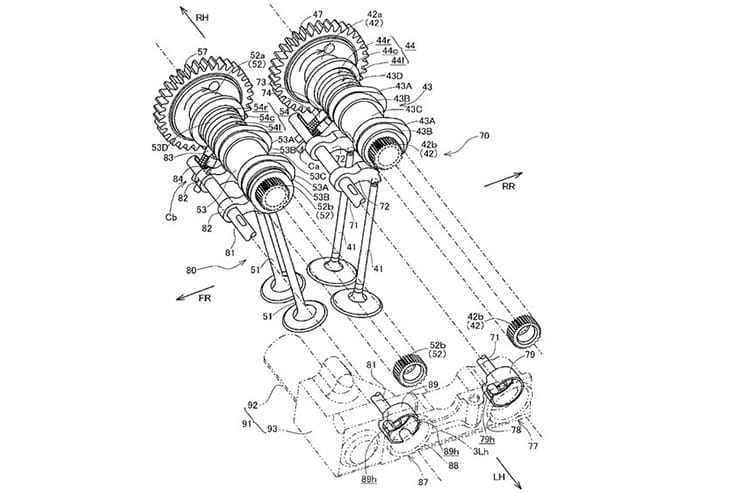 Variable valve timing is set to become the subject of a new development arms race as motorcycle firms combat the conflicting demands for more performance and lower emissions in their next-generation machines. It’s an area Honda knows better than most and the firm’s first patent applications of 2019 reveal that a Fireblade-style superbike is going to benefit from its expertise in the field.

Before we delve into the details, a little background:

First, why is variable valve timing getting more important? It’s because bikes, and sports bikes in particular, rely heavily on getting as much performance as possible within strict capacity limits. Remove the option of an increased capacity and the remaining route to power – short of adding a turbo or supercharger – is by increasing revs.

That throws up a problem, and it’s one of valve timing. At high revs, engines need lots of valve overlap – the moment at the end of the exhaust stroke when both the exhaust and intake valves are open at the same time. Without overlap, there isn’t time to properly vent the exhaust gasses and to refill the cylinder with a fresh intake charge.

At high revs lots of overlap works well, particularly when combined with plenty of valve lift (how wide the valves open) and valve duration (the length of time they remain open). But at low revs lots of overlap causes emissions problems, because when engine speed is reduced, that overlap gives enough time for unburnt fuel to get into the exhaust before the exhaust valves close.

Emissions limits are already a tough challenge for high-performance bikes, and when Euro5 limits come into force in a couple of years’ time, the problem will be worse still. As a result, we can expect to see ever more bikes opting for variable valve timing of some sort to reduce valve overlap at low engine speeds and increase it at high revs. 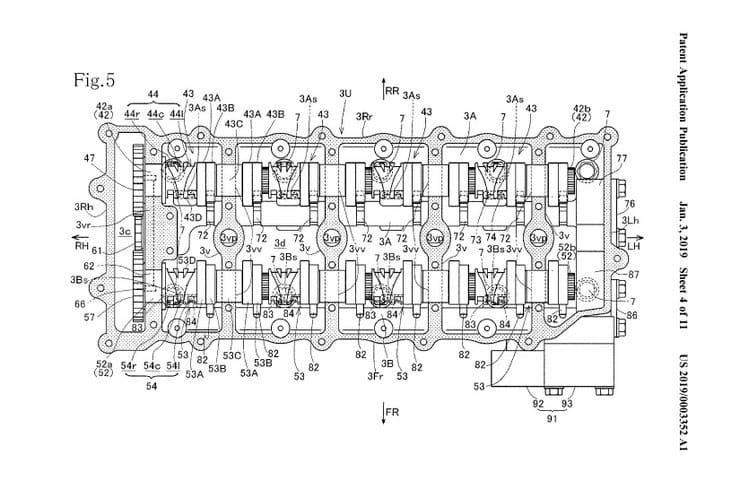 Variable valve timing is already a thing in bikes. Ducati uses it on both the intake and exhaust camshafts on its Diavel and Multistrada 1260 models, and for more than a decade Kawasaki’s GTR1400 had VVT on its intake camshaft. But those systems are simple ‘cam-phasing’ arrangements, which rotate the camshaft a few degrees in relation to the cam sprocket to alter the timing. Both Ducati and Kawasaki’s systems use oil pressure to achieve the movement, while Suzuki’s GSX-R1000 adopts a different tack, using a purely mechanical system relying on centrifugal force to alter its intake cam timing.

However, for 2019 BMW has moved the goalposts by introducing variable valve timing and lift with the ShiftCam system on the R1250 range and the new S1000RR superbike. ShiftCam currently works on the intake cam only, and works by literally moving the camshaft side to side, disengaging one set of cam lobes and bringing a second, more aggressive lobe into play at high revs.

Honda’s new design takes exactly the same approach, with two distinct cam lobe shapes – one for high revs, the other for low revs.

Like BMW’s ShiftCam, the new Honda design works by sliding the cam lobes themselves along the camshaft. And like BMW it achieves that movement by engaging a fixed pin into a spiral-shaped groove on the camshaft’s outer sleeve, forcing it to slide from one side to the other. 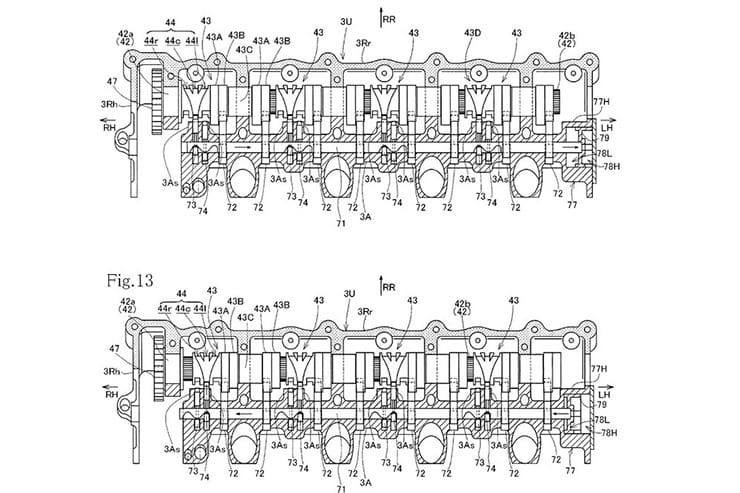 Where Honda’s design differs from BMW’s is in the details. Most notably, Honda proposes to use the cam switching system on the exhaust camshaft as well as the intake camshaft – allowing even more flexibility and further improving the performance and emissions benefits of the system.

Honda’s design also uses four separate outer sleeves on each camshaft – one per cylinder. That’s because on an inline four-cylinder engine, at least one cylinder’s intake or exhaust valves will be open at any moment, and the cam lobes can’t be switched until the valves are closed. BMW combats the problem by splitting the 2019 S1000RR’s ShiftCam into two sections, each dealing with a pair of cylinders. Honda takes it a step further.

Although the use of moving outer sleeves on a splined shaft is the same on both the Honda and BMW systems, as is the system of moving them by inserting retractable pins into shaped guidance channels on the sleeve sections, Honda operates those pins in a different way, using a rod that doubles as the finger-follower pivot to activate the pins. That rod slides from side to side when solenoids release oil pressure into a set of chambers at one end, and is shaped to insert or retract the correct pins depending on its position. In contrast, BMW uses solenoids acting directly on the pins. Honda’s system is more compact, despite having four times as many camshaft sleeves to move. 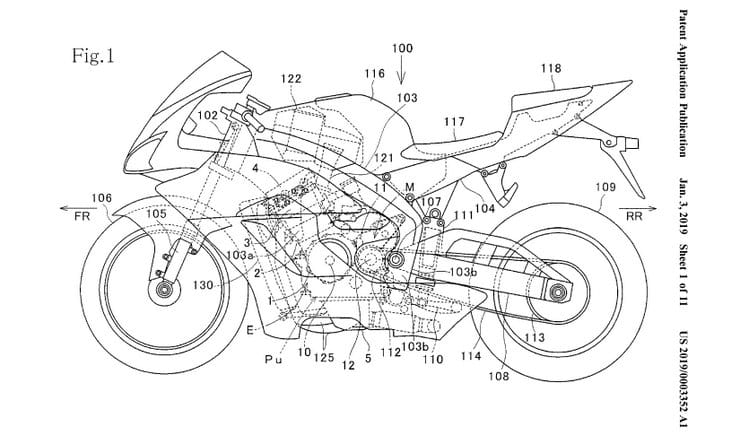 We can’t read too much into the image of the bike that Honda uses to illustrate its new design. Although it’s clearly superbike-shaped, with some typical Fireblade-ish elements (or CBR600RR ones, for that matter), the illustration isn’t likely to be an accurate representation of the bike’s shape.

The fact that the system is designed to help high-revving, high-performance engines to meet future emissions limits means that the Fireblade, or its replacement, is the obvious first recipient. While a CBR600RR replacement is a nice idea, Honda isn’t believed to be working on such a bike at the moment – sales of 600cc supersports machines are simply too low to justify it, and applying technology like this would push its price as high as that of a superbike.

Superbikes are another matter. Sales are still relatively strong and the market has recently shown that buyers are prepared to accept surprisingly high prices, particularly if manufacturers manage to keep depreciation to a minimum, thus making PCP deals more attractive.

There’s also the simple fact that Euro5 emissions rules will make it near-impossible for manufacturers to continue the quest for increased performance without adopting technology like this.

When will we see the next 2020 CBR1000RR Fireblade? It’s too early to be certain, but with Euro5 expected to be adopted throughout the EU in 2021, expect something carrying technology like this to appear before it comes into force.