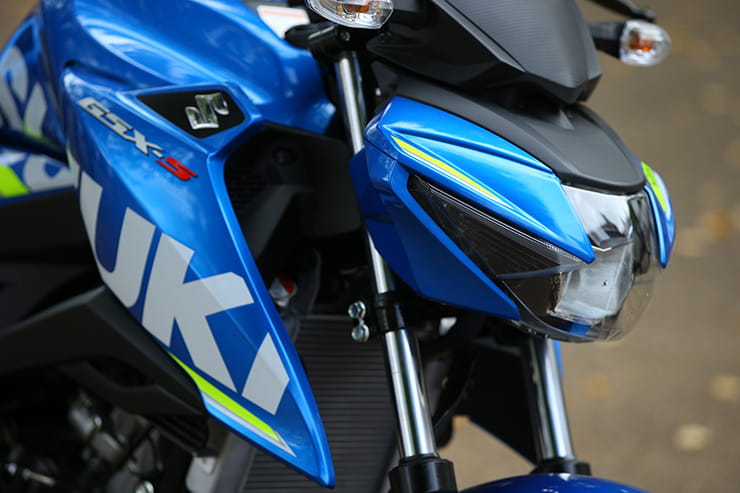 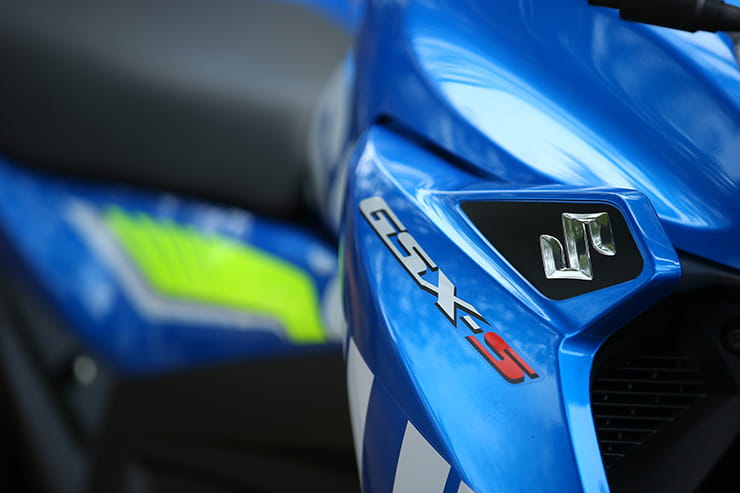 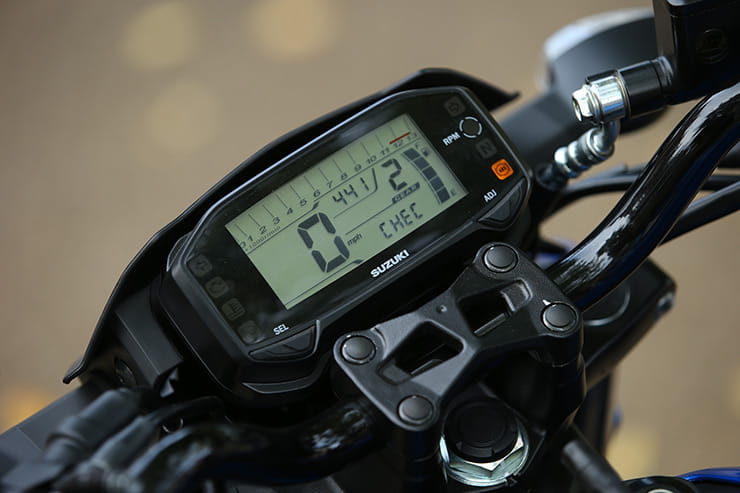 While the new GSX-R125 faces tough competition in its class, arguably the also new GSX-S125 is even more up against it in terms of rivals.

Despite us all having a soft spot for race reps in the UK, naked 125s are the big sellers in Europe and that means it is this area where manufacturers have been pulling out all the stops. But as well as being surprisingly high tech, naked 125s also need to be cheap and that is a tough cookie to crumble. So, how have Suzuki added value to their GSX-S125 while still keeping its price down? 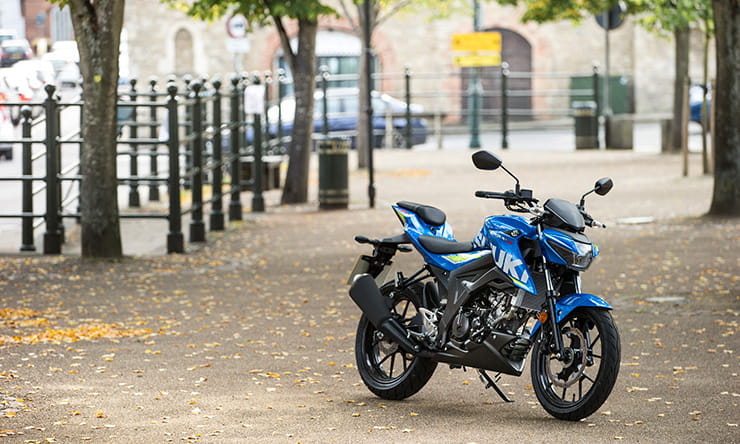 As you would expect the GSX-S125 is essentially a GSX-R125 minus its fairing, so that means the same engine, chassis and ABS system as the racer, which is not only cost-effective, but also good news as the GSX-R125 is an impressively handling machine. Adding, or more precisely removing, from this platform Suzuki have whipped off the fairing, stuck on a single front headlight unit with a small screen, bolted a belly pan on to keep the engine clean and added flat bars. So where is the extra value when the likes of the KTM 125 Duke has a digital dash with smart phone connectivity and the Aprilia Tuono 125 can also be linked to a phone?

Suzuki have given the GSX-S125 shutter-key lock technology, which is basically an ignition cover to help protect the bike from getting stolen. Yeah, I’m not sure kids will really care about this when they have the option of getting music and calls through to their dash instead either… 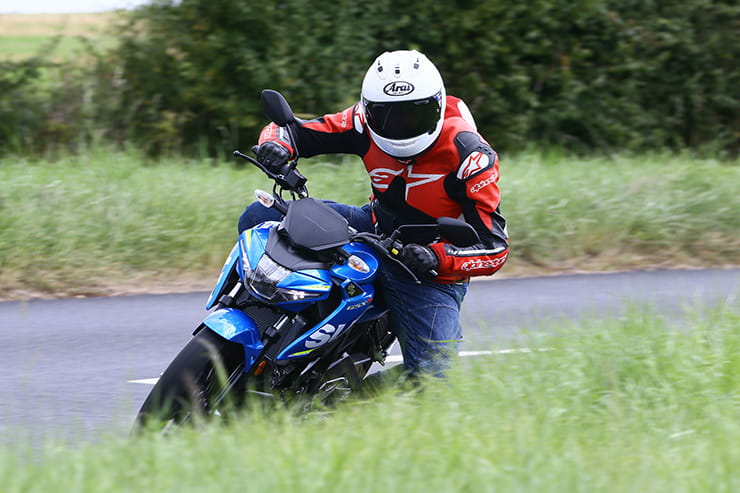 So, technology-wise it has to be said the GSX-S is a bit behind the curve, but how does it stack up on price? Costing £3699 or £3799 for the MotoGP rep, the Suzuki is cheaper than the £4099 KTM 125 Duke, £4299 Yamaha MT-125 (which is also quite low-spec in terms of technology) and £4599 Aprilia Tuono 125. Ok, you have the budget 125s such as the Honda CB125F for £2799, the Yamaha YS125 for £2799 and the various Far Eastern bikes for considerably less, but in term of placement, the GSX-S125 sits quite nicely in the midway ground between budget and premium. And, pleasingly, to ride it feels far more of a premium machine than budget one, which is good news for Suzuki. 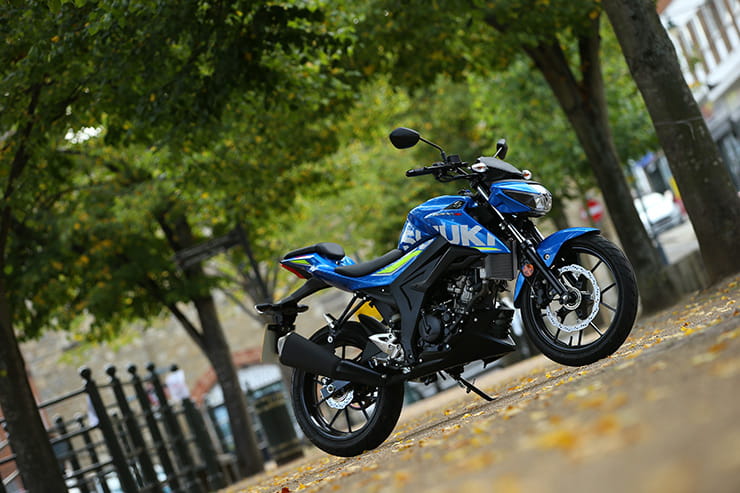 Having ridden and been pleasantly surprised by how good the GSX-R125 was the day before, it was less of a surprise that the GSX-S125 was equally as impressive. The flat bars raise your hands 100mm when compared to the mini-racer and that certainly makes it noticeably more comfortable while not adversely effecting its handling. It’s not quite as planted on the front as your weight distribution is more towards the rear, but it’s very marginal and nothing concerning. And to be honest, that’s the only difference between the two machines, but due to their styling and purpose in life they should appeal to different markets.

As an urban commuter the GSX-S125 is arguably a better option than the GSX-R125. The more upright seating position and wider bars make it really nimble at low speed and simple to U-turn or nip through gaps and although you do sacrifice a bit of wind protection, I only managed to get the naked bike up to 75mph (I reckon 80mph is possible with a downhill incline) so realistically it’s no hardship. 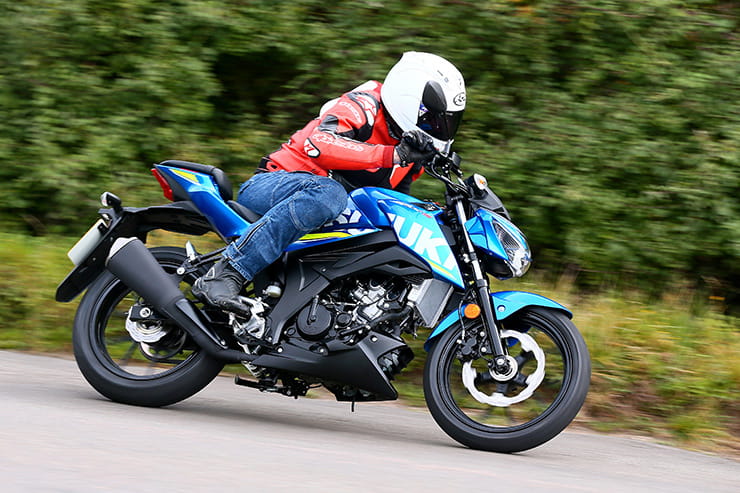 So out of the naked and sportsbike Suzuki 125s which will be the more popular bike? Suzuki are estimating that the UK’s market will buy around 1/3 more GSX-R125s than the naked GSX-S125, but I wouldn’t be surprised if this turned out to be the other way around. Naked commuters appeal to a wide range of riders where 125cc sportsbikes are generally only bought by younger riders. Speaking to KTM dealers they tell me that the 125 Duke sells to as many middle-aged riders as yoof and I could see the GSX-S125 pulling off the same trick. With cheap insurance, a claimed 122mpg and decent build quality it’s an equally  good bet for commuters as well as new riders. But is it better than its rivals? The 125 Duke’s funky styling and connectivity will win it the fashion-conscious youth vote, but I’d say the Suzuki wins it in terms of performance and handling when compared to the Yamaha MT-125, which I feel will be its main rival. Again, as with the GSX-R125, good job Suzuki. 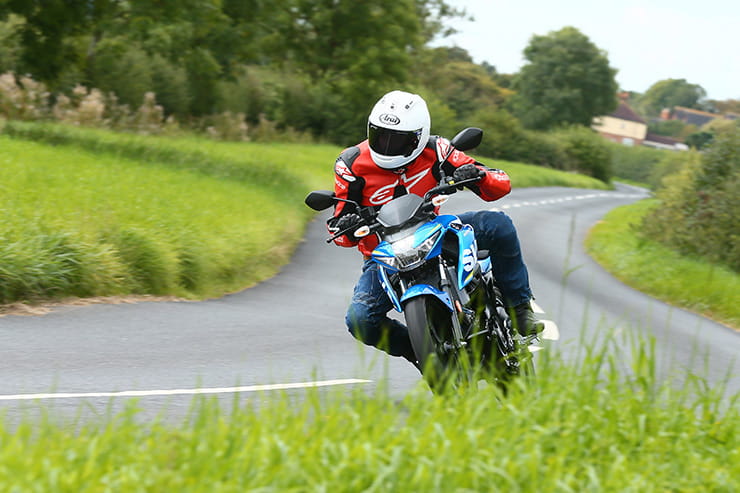 The GSX-S has a similar array of accessories to the GSX-R and that means a pillion seat cover, decals, wheel rim tape, heel plate protectors and a tank pad and bag. All should be one sale when the bike arrives in the UK in October.