New 2021 Suzuki Hayabusa: The Busa is back 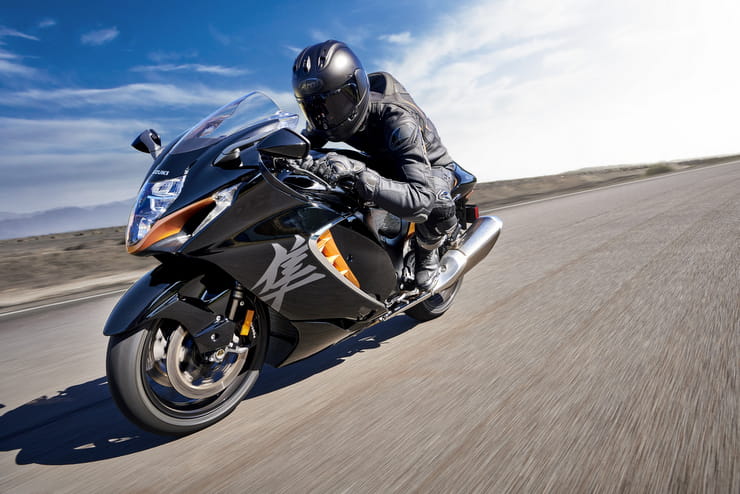 Back in December 2018 we mourned the news that Suzuki was calling a halt to Hayabusa sales after a two-decade reign as the definitive king of speed. Now it’s rising from the grave looking younger than ever.

Suzuki didn’t want to kill the Busa in 2018, but in Europe its hand was forced by emissions rules. The last generation of the bike was only certified to Euro3 standards, and since Euro4 was brought in in 2016 it had been living on borrowed time, accounting for Suzuki’s quota of ‘end-of-series’ models permitted to remain on sale for up to two years after the introduction of the rules. With no Euro4 model forthcoming when that time was up, the bike had to be withdrawn from sale.

Now, though, the Busa has been completely reworked, retaining the spirit and much of the hardware of the old model but with a brand-new look and an engine that, having skipped Euro4 entirely, now meets Euro5 rules. 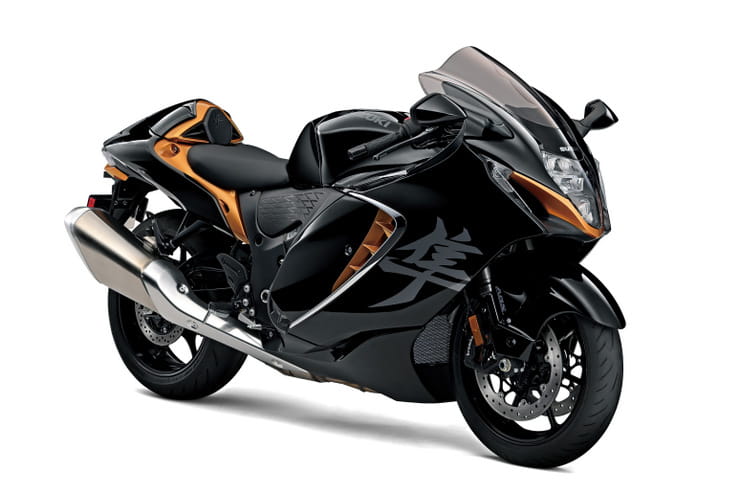 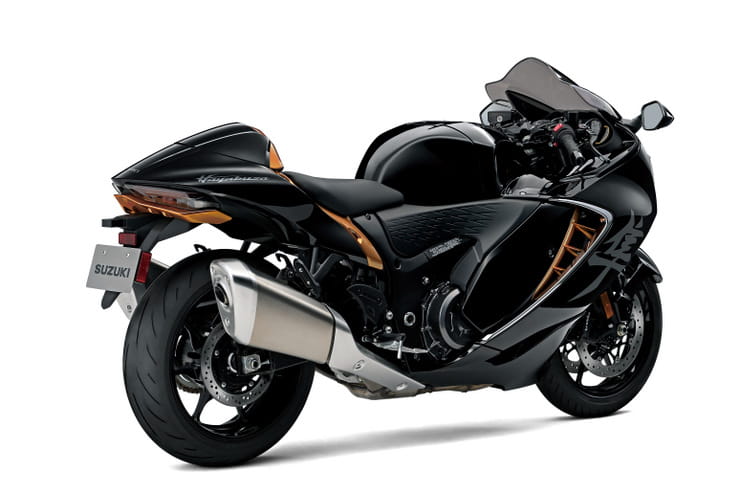 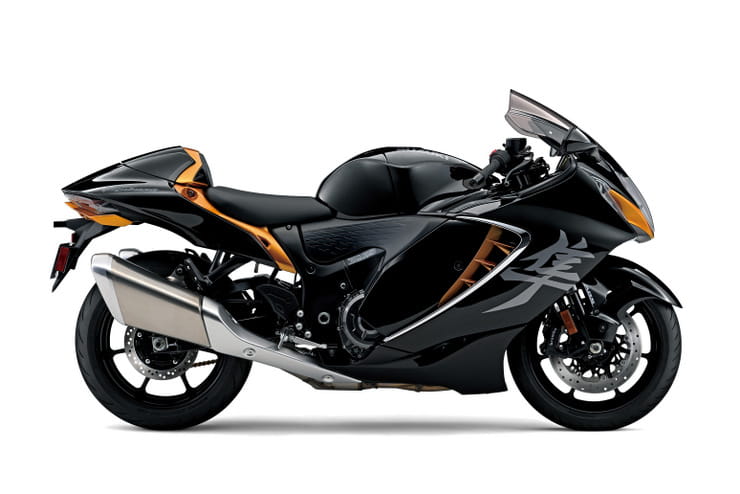 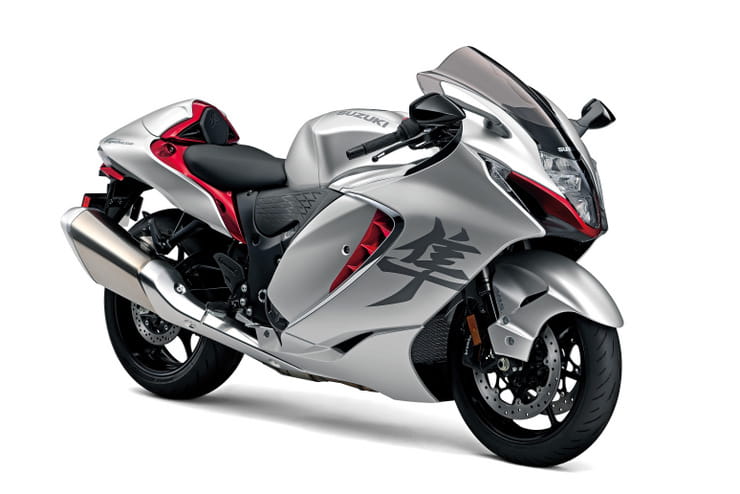 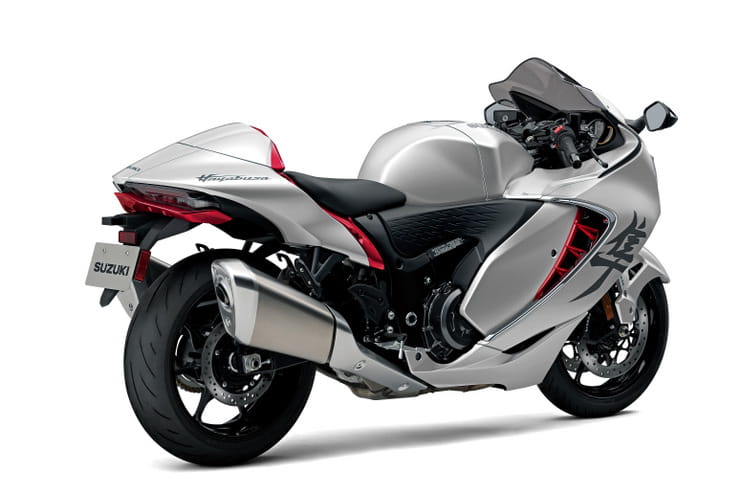 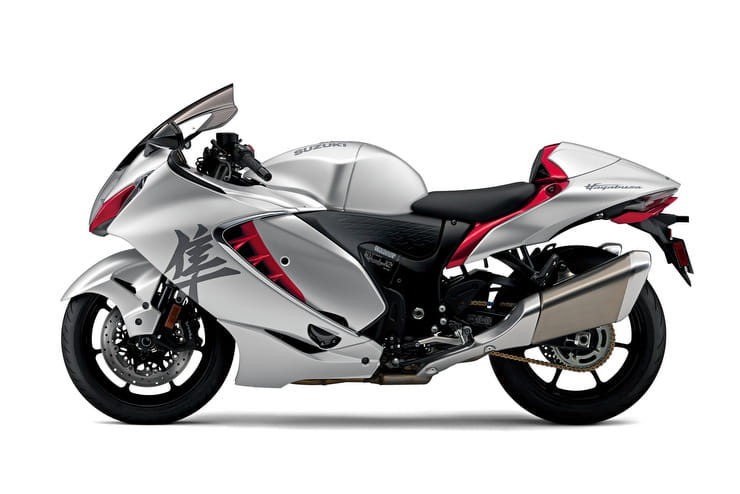 The good news for Busa fans might be tempered by the 2021 model’s spec sheet. Ignoring minor updates, there have been two distinct previous generations of the bike – the original 1999 model with 173hp on tap and the 2008 revamp that raised capacity from 1299cc to 1340cc and upped power to 195hp. If you were hoping that a baker’s dozen years of development since then would lead to a similarly impressive power hike, we’ve got bad news – the 2021 model, strangled by emissions requirements, peaks at 188hp (190PS, 140kW) and 9700rpm.

Having considered various options including a six-cylinder engine, a larger-capacity four and even a turbo version of the bike, Suzuki instead opted to keep the same 1340cc four-cylinder engine with design roots in the original 1999 model, and to use the same 81mm bore and 65mm stroke that was introduced in 2008. Forced to comply with Euro5 rules, a drop in power was almost inevitable. Torque, which previously peaked at 113.6lbft at 7200rpm, now tops out at 110.6lbft at 7000rpm.

But put that bottom lip away because Suzuki says the revamped motor’s improved power delivery and response means it feels every bit as fast as the old version apart from at the very top end. Top speed of the new model, like every Busa apart from the very first examples, is electronically limited to 186mph. 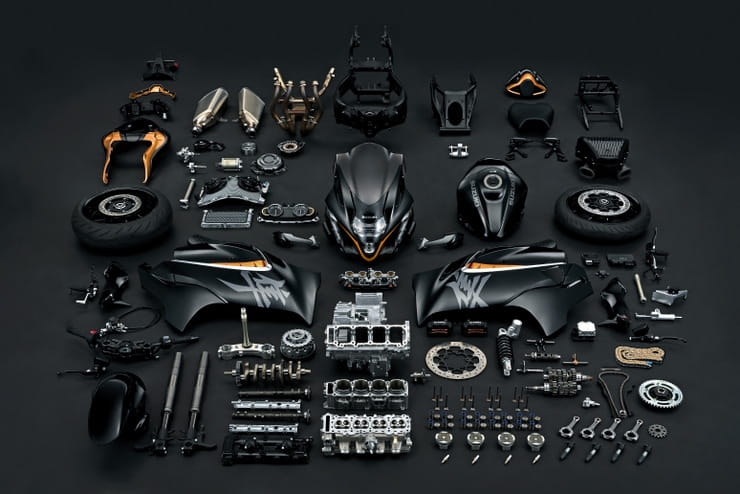 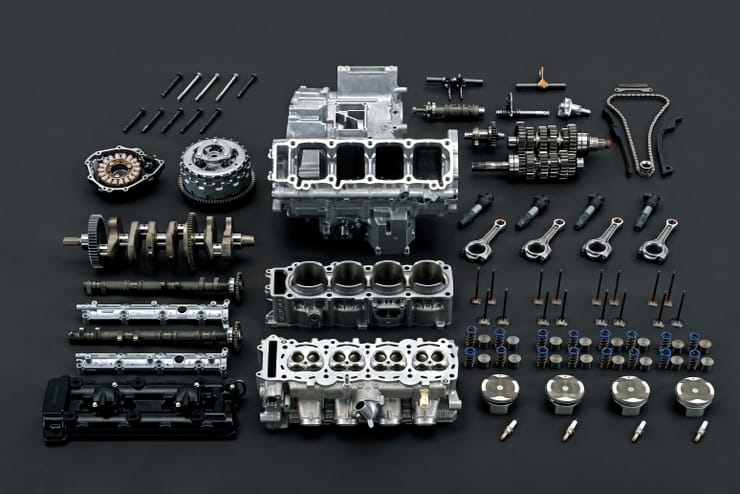 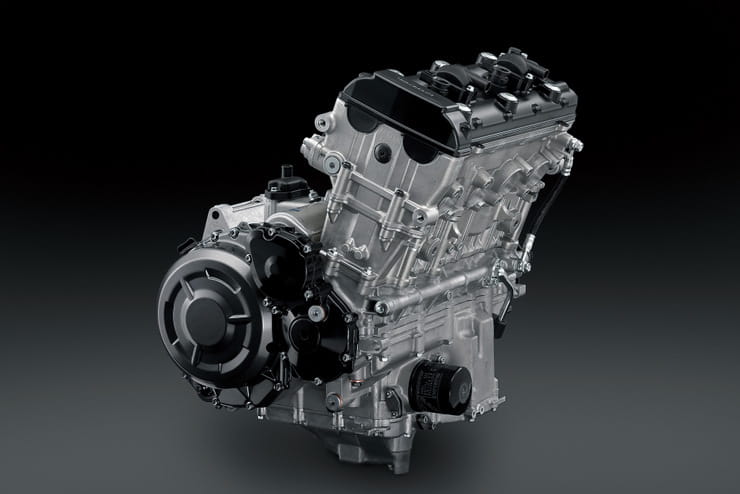 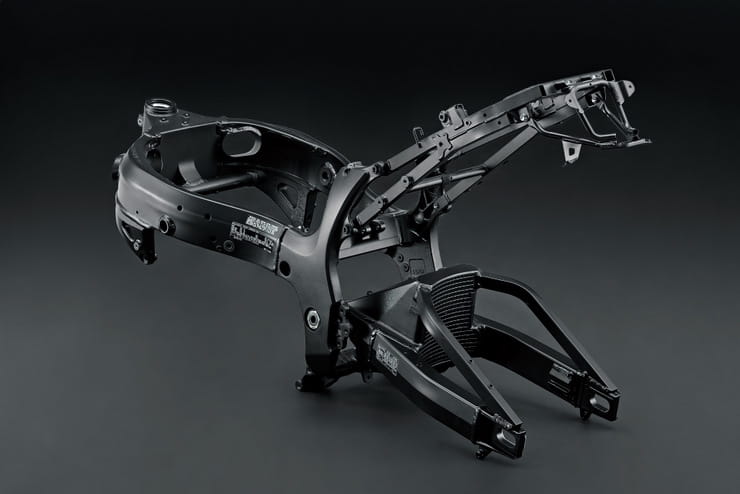 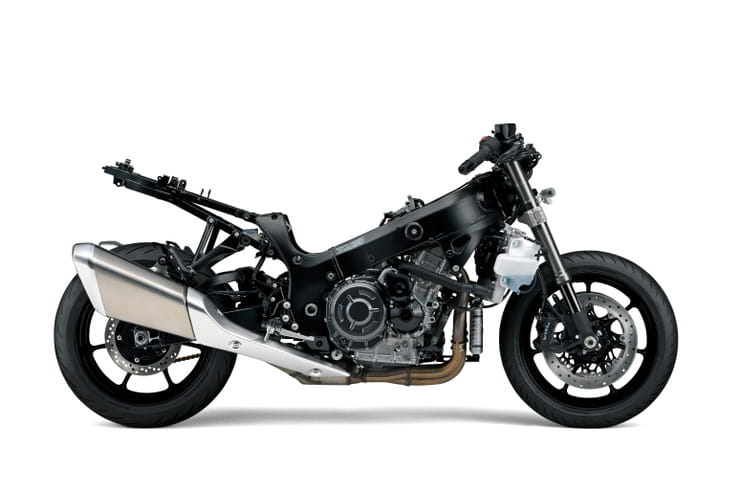 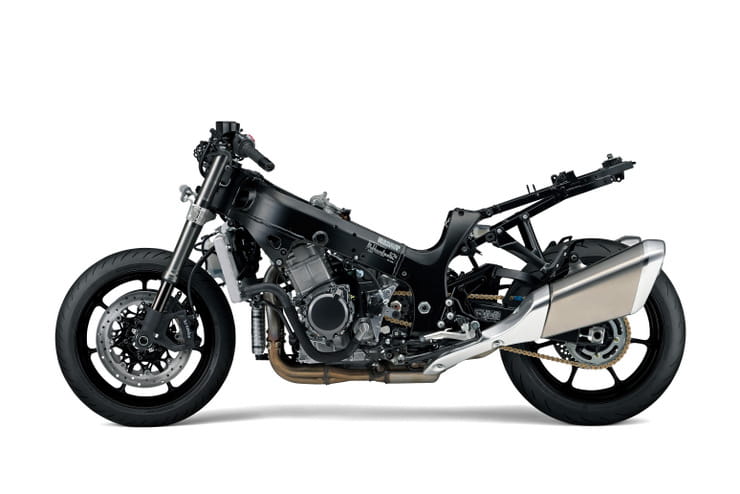 It’s not just the engine that will be familiar to the existing Busa fans, as the 2021 bike’s chassis is also a carryover from before and virtually unaltered in its basic design since the original model in 1999. Is that a bad thing? Arguably not, as the Hayabusa always tended to be the best-handling of its peer group and now, updated with 2021-spec suspension and running gear, there’s no reason that the essential rightness of the twin spar frame has changed.

So, if the basic engine and chassis are carried over, what is new? The answer is: plenty.

Starting with that 1340cc four, the camshafts are reprofiled, the valve springs are new and there’s more exhaust valve lift. New pistons, rods, piston pins and a redesigned crankshaft sit below them, there’s a new assist-and-slipper clutch and tweaks to the transmission – in part to accommodate a new up-and-down quickshifter. In many areas the improvements focus on longevity and reliability, with better oil flow for the crank and stronger bearings in the gearbox. Reading between the lines, if you wanted to tune the 2021 Hayabusa, it’s likely to take the punishment better than ever before (and bear in mind that there are plenty of examples of turbocharged Busas with twice the stock power.)

The changes mean that despite lower peaks for power and torque, Suzuki claims the new bike is quicker than ever before. The 2021 model is claimed to reach 62mph from standstill in 3.2 seconds, 0.2 seconds faster than the 2nd gen bike and 0.1 second quicker than the original model. The 0-200 metre time is also down to 6.8 seconds (6.9s for the 2nd gen, 7.1s for the 1st gen bike). On the downside, it drinks a bit more heavily than before, managing 42.1mpg where the 2nd gen achieved 49.7mpg. But then again, if that’s a concern you’re probably more likely to buy a Honda Cub than a Suzuki Hayabusa.

A new exhaust system is fitted, of course, to accommodate Euro5 regulations and cut weight – the new bike’s fully-fuelled mass is down from 268kg from the last model to 264kg for the 2021 version. 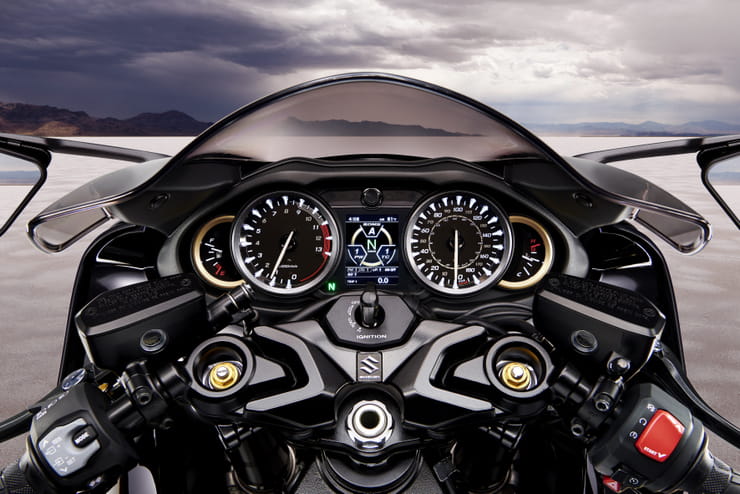 On the electronics side, the 2021 Busa gets new secondary injectors that bounce fuel off a plate in the intake funnel to improve its atomisation, aiding the claimed increases in low to mid-range performance, and it’s all tied to a ride-by-wire throttle system with wider throttle bodies than before.

Suzuki was in the vanguard of the move to multiple riding modes, introducing SDMS (Suzuki Drive Mode Selector) to the Busa back in 2008, but the new model’s version of the system is much more in line with modern expectations. Called SDMS-α it gives three pre-set options, each altering power mode, traction control, wheelie control, engine brake control and quickshifter settings, plus three user-definable settings.

As you’d expect in 2021, the system displays its mode on a TFT display, but Suzuki hasn’t been tempted to go for the all-out, oversized screens used on many other modern bikes. Instead, the firm is sticking to the two big analogue gauge dash layout of older Busas, but with a colour TFT screen between them to display all the extra info.

The 2021 Hayabusa’s electronics package also includes all the kit you’d expect from a range-topping bike, like a six-axis IMU and cornering ABS, all with layers of options and settings. There’s also cruise control and a combined braking system, rear wheel lift control, hill-hold control, a one-touch starter button and a low-RPM assist system that helps prevent stalls. 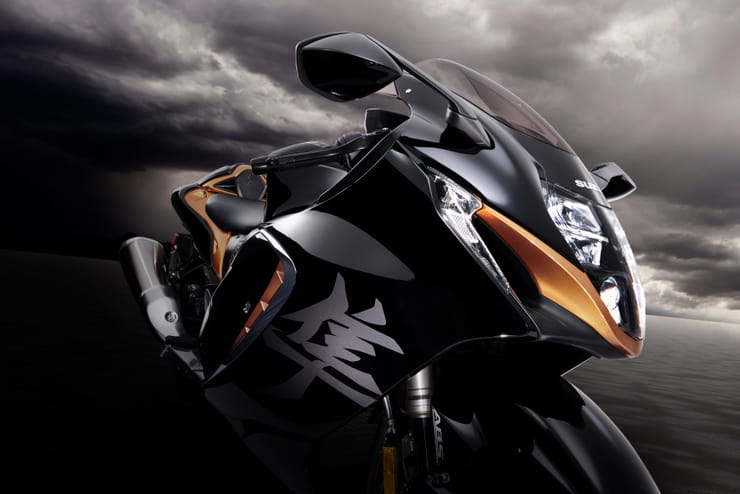 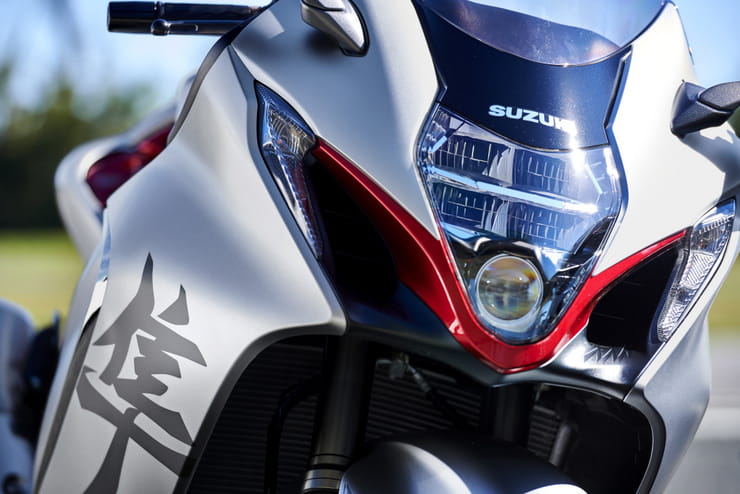 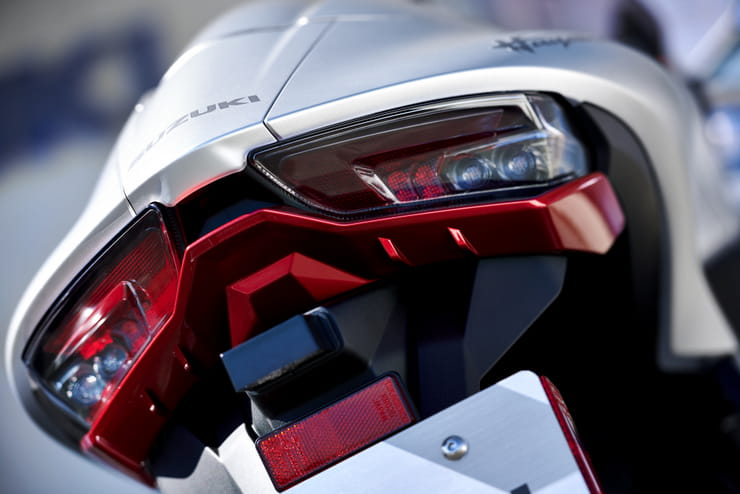 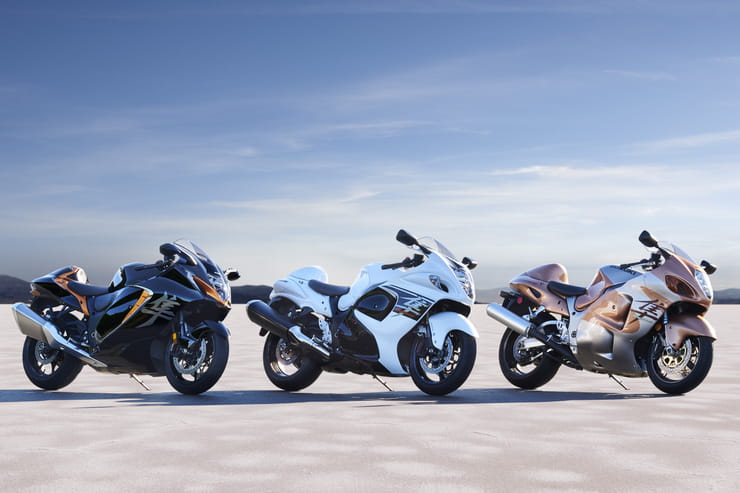 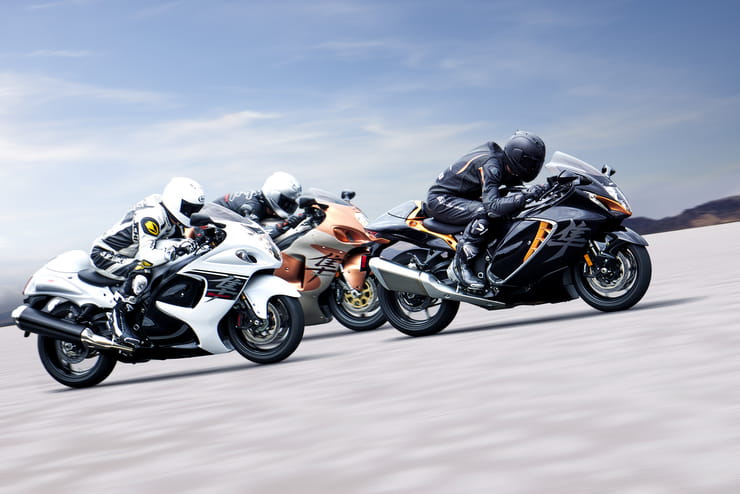 While the chassis is the same as before, it features a revised seat subframe that cuts 700g from its weight and uses updated versions of the previous model’s 43mm KYB forks and shock. Brembo provides its Stylema calipers for the front brakes, gripping 320mm discs – 10mm larger than before and with a new cross-drilled pattern to improve cooling.

The whole package is wrapped in new styling that carries plenty of traditional Hayabusa cues but manages to look sleeker and less bulbous than previous iterations. As with earlier generations, the wind tunnel was used extensively to ensure that despite styling-led changes to make the bike look better, it still cuts through the air just as efficiently as before. A taller screen and bars moved closer to the rider improve comfort, and as you’d expect in the third decade of the 21st century, all the lighting is LED. Unusually, the front indicators – mounted in the traditional Hayabusa spot on the outer flanks of the ram air intakes – now incorporate the position lights, so the same units can light in either orange or white depending on their purpose. A wide rear light unit with the indicators built-in completes the package.

How much is the 2021 Suzuki Hayabusa?

The bike’s due to arrive in dealers around the middle of March but we’ve had the price confirmed as £16,499. That will put it into direct competition with arguably its nearest rival on the market today, Kawasaki’s supercharged, 200hp H2 SX, which starts at £15,899 (although the higher-spec SE version is significantly pricier at £19,099).

Of course, Suzuki will be only too happy to empty your wallet further and is laying out an array of options for the 2021 ‘Busa including a higher screen, pillion seat cowl, tank bags, heated grips, billet levers and a pair of Akrapovič slip-ons. Colour-wise, the 2021 options are kept simple – either black with bronze-coloured highlights or matt silver with candy red details, both featuring sweeping chrome flashes around the fairing side vents. 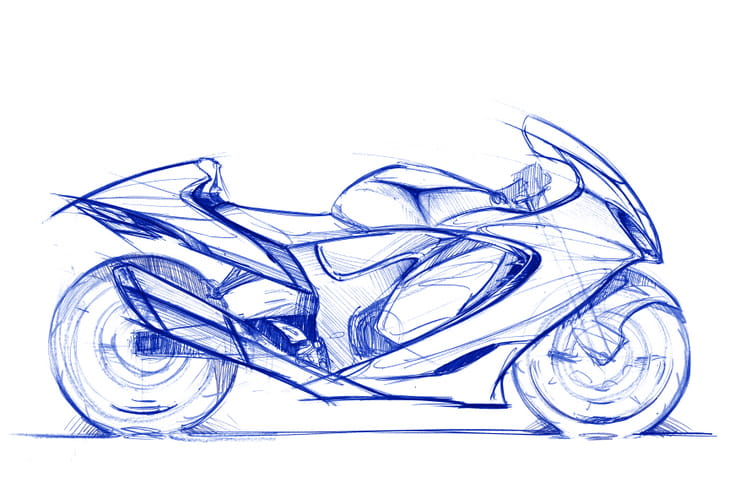 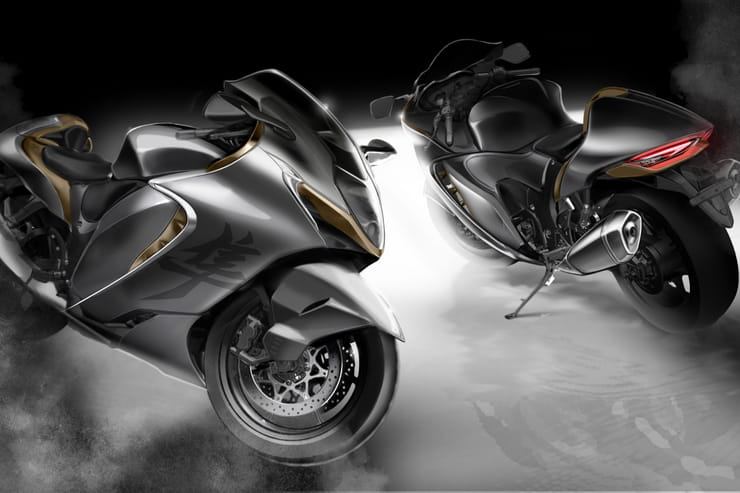 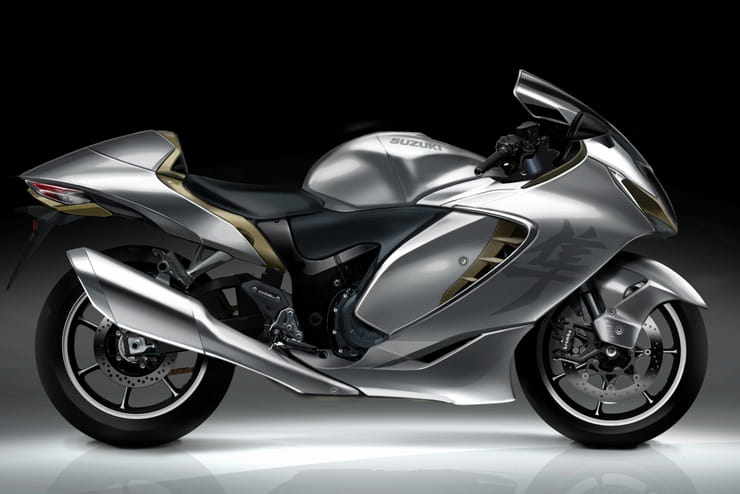 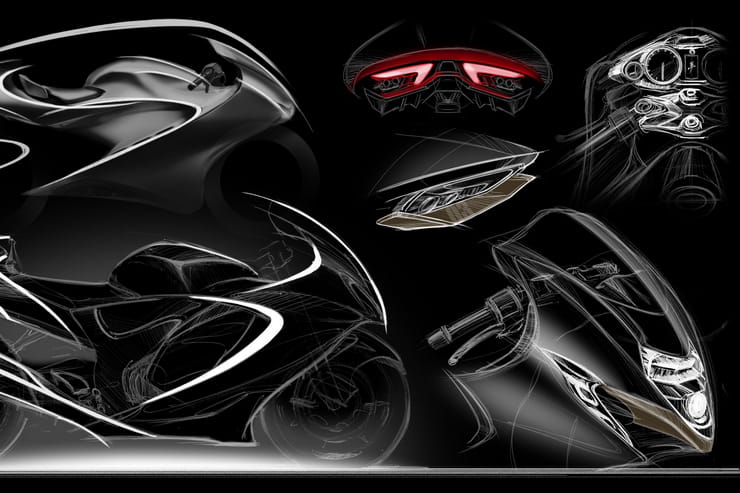