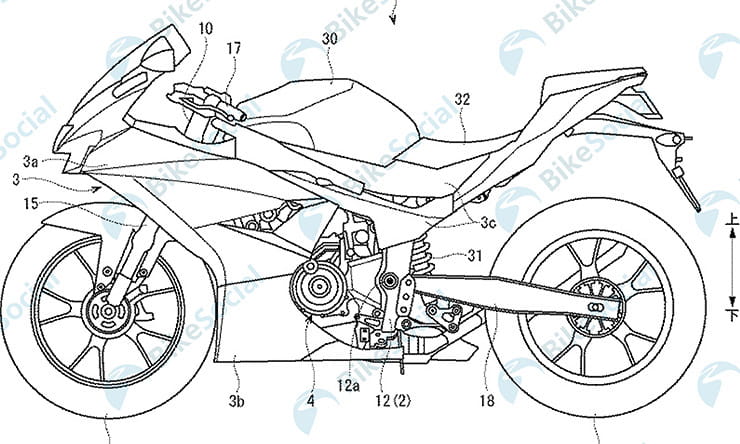 Suzuki has long been rumoured to have a sporty GSX-R300 in the pipeline for 2019 and now there’s evidence to suggest those whispers are true: the firm has filed patent applications for a completely new parallel twin sports bike.

There’s no question that the 300cc sports bike class is on the rise. While 600cc supersports machines have fallen from favour, the introduction of the 250cc Moto2 race category and the WorldSSP300 category is injecting new interest in the idea of smaller machines.

At the moment, most manufacturers have something to offer in the category.

While Suzuki already has the GSX250R in its line-up, that machine is far softer than most of its rivals. It’s little more than a GW250 Inazuma dressed up in a posh frock, while Suzuki’s competitors are increasingly fielding purpose-designed baby sports bikes. 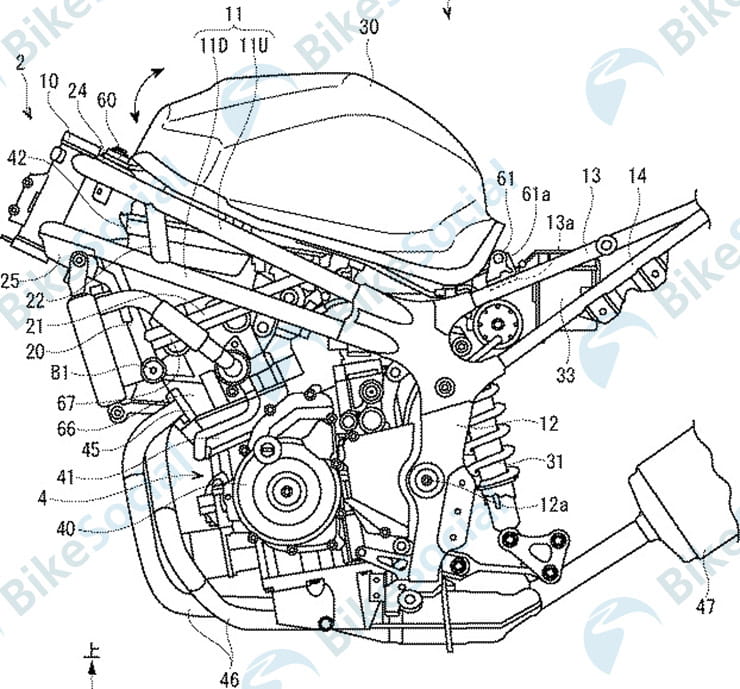 The existing GSX250R’s ageing 248cc twin is an old-fashioned two-valve, under-square design; the 55.2mm stroke is bigger than the 53.5mm bore. In comparison, Honda’s CBR250RR – which is not yet sold in Europe – uses four valves and a 62mm bore and 41.4mm stroke to achieve its 249.7cc capacity.

The resulting power difference is huge. While the GSX250R struggles to 24.7hp at 8000rpm, the CBR250RR’s twin manages 38.1hp at 12,500rpm. That’s 54% more power, which should be little surprise as the short-stroke Honda engine revs 56% higher than the Suzuki’s long-stroke design.

In terms of machines that are available here, the Yamaha YZF-R3 is the clearest competitor. It uses an even bigger 68mm bore and 44.1m stroke, stretching it to 321cc and reaching 41.4hp as a result. The GSX250R is much cheaper, of course, but operates in a different performance class. However, the fact that Suzuki doesn’t call its existing 250 ‘GSX-R’ is important; it leaves a gap for a higher-performance machine in the line-up. And that high-performance model is what you are probably looking at in these patent images. 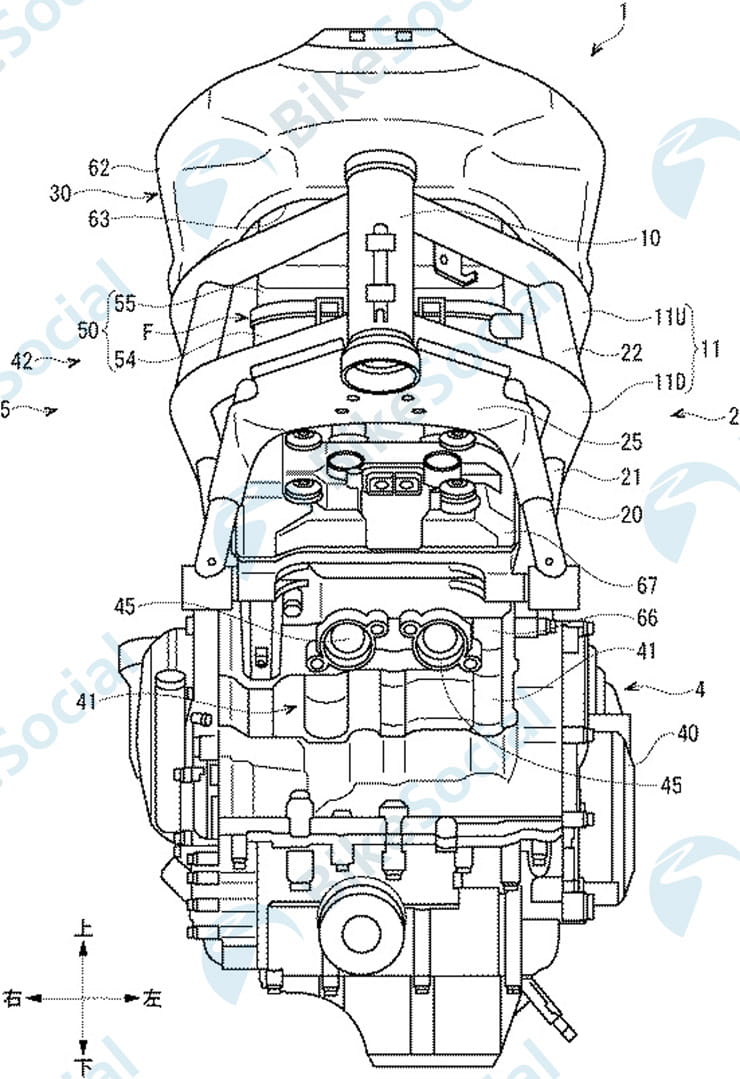 What we can see is a completely new parallel twin, DOHC engine mounted in a much sportier machine than the GSX250R.

Chances are that the engine shares some internal dimensions with the class-leading single-cylinder motor used in the new GSX-R125 (which is offered in some markets as the slightly larger-capacity GSX-R150).

The GSX-R125’s bore and stroke – 62mm x 41.2mm – are near-identical to the cylinder measurements of the Honda CBR250RR. By doubling it into a parallel twin, Suzuki should instantly have a competitive motor. And given that there’s already a GSX-R150 version sold in markets where there’s no 125cc learner limit, using a 48.8mm stroke to give 147.3cc, a 295cc ‘GSX-R300’ twin makes a lot of sense. In 300cc twin-cylinder form the engine should be good for around 40hp, putting it in a completely different league to the existing GSX250R.

The patents show the engine mounted it a trellis-style tubular steel frame, similar to that used by Honda on the CBR250RR. Although there’s little visible detail of the suspension or brakes, the outline suggests upside down forks, and the mounting brackets suggest a single radial-mount front brake disc.

At the back there’s a conventional swingarm – probably aluminium, given the shape shown in the patent images – and a rising-rate monoshock. 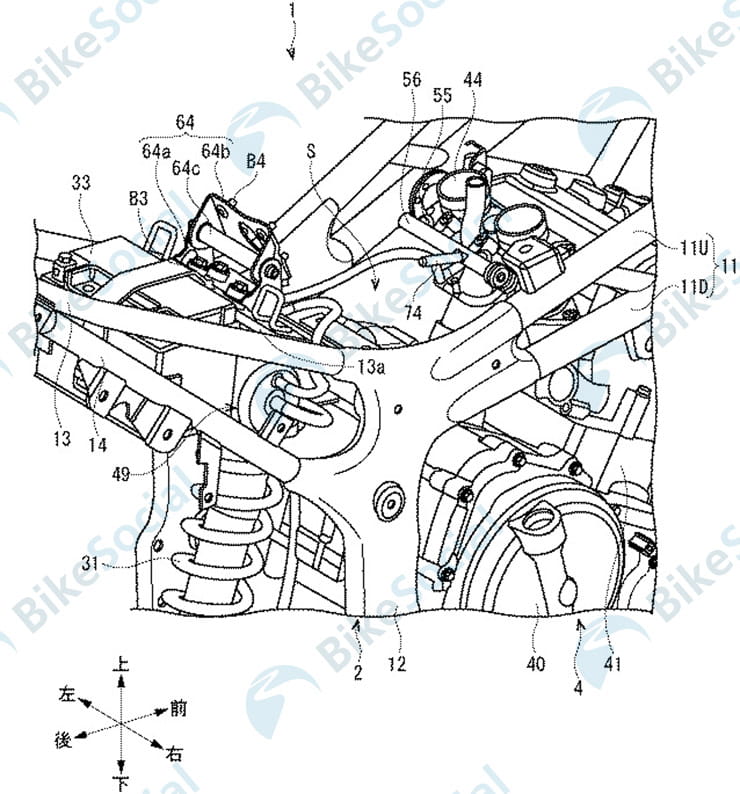 The patent applications themselves give a hint at the bike’s potential, referring to it as a ‘high power’ ‘sport type’ bike. One patent picks out details of the air cleaner, showing how it can incorporate tall, downdraught intake trumpets and still fit under the fuel tank. The second shows how that tank is hinged at the back, allowing it to be tipped up to access the airbox without needing to disconnect the fuel hoses.

It’s dull, detailed stuff, but exactly the sort of thing we’d expect to see on real-world patents intended for a production bike.

What’s unusual is that the drawings seem to show the entire bike rather than disguising it under nondescript, purely illustrative bodywork. So we can clearly see what the styling of the new bike is like.

The shapes fit neatly with Suzuki’s existing design themes, and unsurprisingly the bike looks every inch the bigger brother to the GSX-R125. The headlight is similar to the GSX-R125’s, with a distinct V-shaped centre lamp flanked by two lateral extensions. The seat unit is also similar to that of the GSX-R125, while the side fairing panels and tank appear to be a bit more faceted and angular. The ten-spoke wheels are again typical Suzuki sports bike fare.

From what we hear, the GSX-R300 is set to be revealed in late 2018 as a 2019 model. It’s a bumper year for Suzuki, with a revamped Hayabusa also on the way as well as the turbocharged twin-cylinder bike that’s being spun off from the Recursion concept.

We also hear that there will be a naked GSX-S300, although it’s yet to be seen whether that machine will be a stripped-down version of the GSX-R300 you see here or a Suzuki-branded version of the Haojue HJ300 that’s also set to appear later this year.