For most of us when we start out in motorcycling, one capacity category of bikes is the most important of all – 125s.

Although legally you can start on two wheels at 16 (as long as you hold a provisional licence, have a CBT certificate and display L plates), the restriction at that age to AM category machines, bikes or scooters of under 50cc that are capable of no more than 45kph (28mph), can hold limited appeal.

Instead, many hold on to 17 when they become eligible for an A1 machine, which is when, for many, motorcycling really starts to become interesting.

The A1 category, in effect, allows riders their first taste of ‘proper’ motorcycles. A1 bikes can be up to 125cc and 11kw/15bhp (as long as the power/weight ratio is no more than 0.1kw/kg), are often capable of around 70mph and as such, although targeted at novices, can also include the whole gamut of ‘big bike’ motorcycling features such as six-speed transmissions, proper brakes and suspension not to mention the ‘big bike’ looks that go with it.

And, by being such a popular category, there’s a constant stream of newcomers each year all designed to tempt us onto two wheels.

So, what’s out there? What are the new 125s you should be aware of? And which are the best ones across the different types of A1 bike, whether after a sportster, naked, trail bike, supermoto or even retro? Here’s our pick of the best new and existing 125s to help you decide… 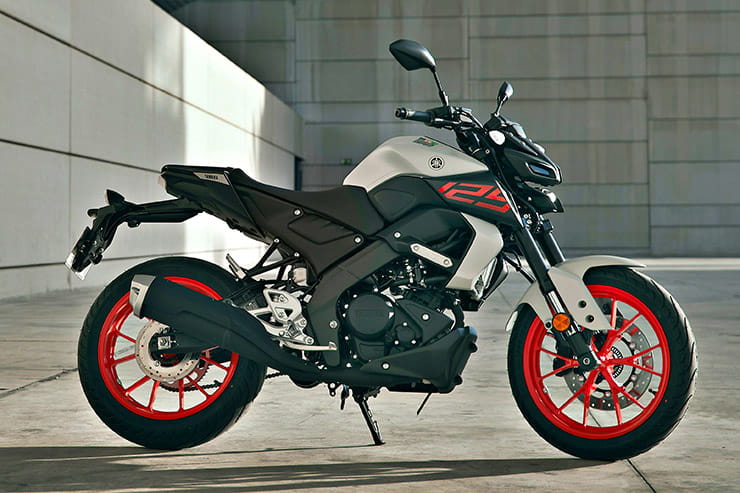 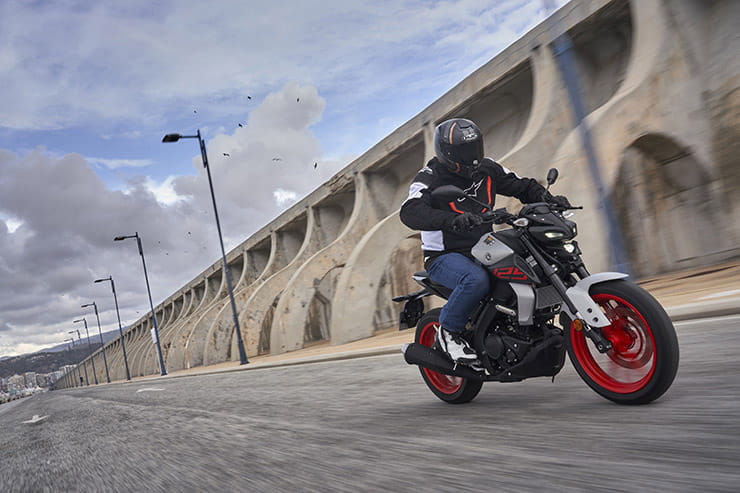 The biggest news from 2020 in the 125 category was the arrival of Yamaha’s significantly updated MT-125 – the naked, roadster version of its hugely successful YZF-R125 which itself got a major overhaul last year. Though less celebrated, the MT has been a big success, too, since its original launch in 2014 with over 36,000 sold Europe-wide and being the second best-selling 125 across Europe in 2018. Naturally it shares much of the YZF’s updates, namely new variable valve-timing which makes the liquid-cooled single even more flexible and novice-friendly, new steel Deltabox frame with slower steering geometry than the YZF for added stability, improved suspension set-up, new Michelin Pilot Street tyres, stylish new ‘reversed’ LCD dash and, most obviously of all, new styling that’s more in line with its MT-07 and MT-09 brothers that combines with a more upright, supermoto-style riding position that gives great control and maneuverability. The result is one of the classiest, nicest-riding 125s out there, the only downer is the fairly steep price. Read our full review here. 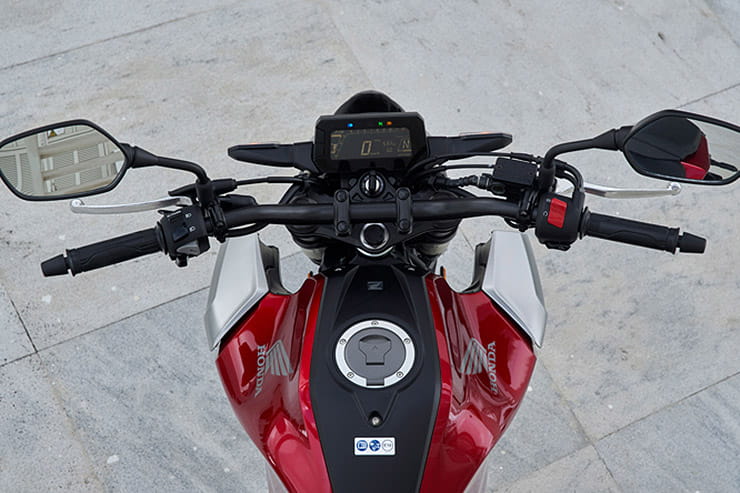 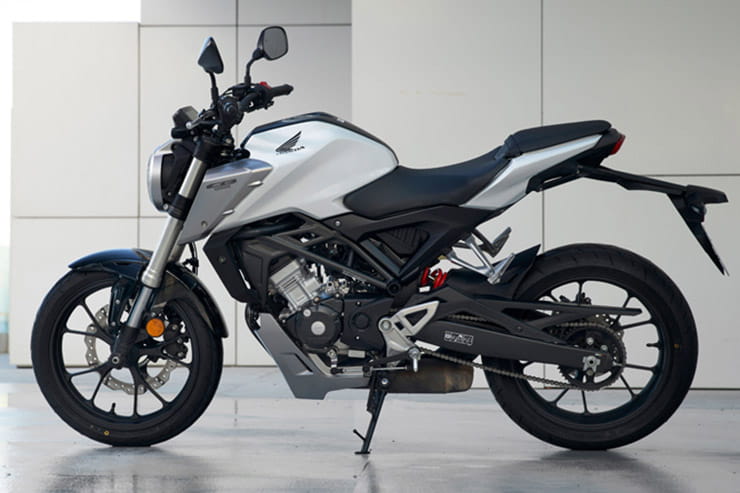 Although new last rather than this year, we can’t let the MT-125 go by without mentioning Honda’s CB125R, a great street ‘naked’ 125 in its own right that’s also almost £500 cheaper than the Yamaha. Introduced in 2019 and intended as the junior, ‘entry-level’ member of Honda’s ‘Neo Café’ roadster family which also includes the CB650R and CB1000R, it’s Big H’s overdue first stab at a funky, fun 125 roadster and, with its trendy styling including a round LED headlight, decent spec including inverted front forks, radially-mounted front brake caliper and MT-125-alike reversed LCD oblong dash, it ticks all the boxes even at a standstill. On the move, however, it’s better still: although not quite as powerful as the Yamaha, its liquid-cooled single is arguably even more flexible and user-friendly while the handling is blissfully light and neutral. Its ace card, though, is the price. Although it’s increased now slightly from the sub-£4K launch price, it is still significantly less than much of the competition, which, for a Honda, is largely unheard of. See our full review here. 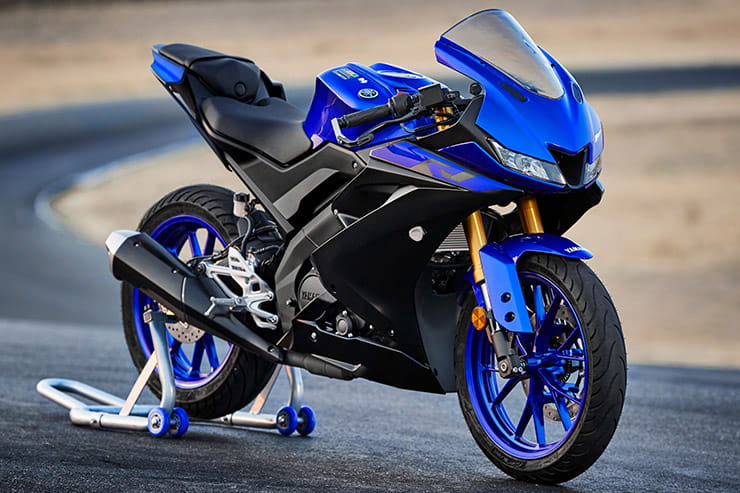 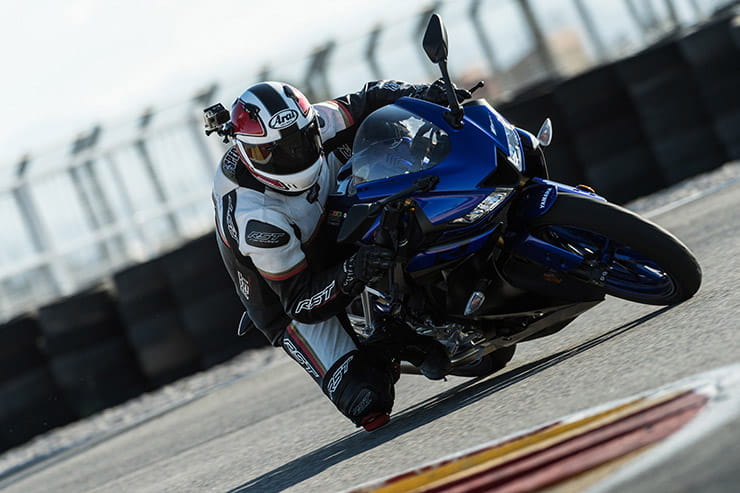 Ever since its original launch in 2008, Yamaha’s ‘junior R1’ has been the benchmark sports 125 thanks to its combination of grown up proportions, brilliant, yet novice-friendly dynamics and styling any Valentino Rossi fan would die for – even if it has also been one of the priciest offerings in the class. The third generation makeover last year raised the bar even further with many of the changes that have now been passed over to the new MT-125 roadster, namely: new, more flexible variable valve-timing engine; revised chassis to give more confidence-inspiring handling; uprated equipment including a flash new LCD dash and, perhaps most importantly of all for most buyers, new R1-alike styling that makes it the poster bike for any sports mad 17-year-old. Still not cheap, but if you want a sports 125 and can afford it, this is the one. Read our full review here. 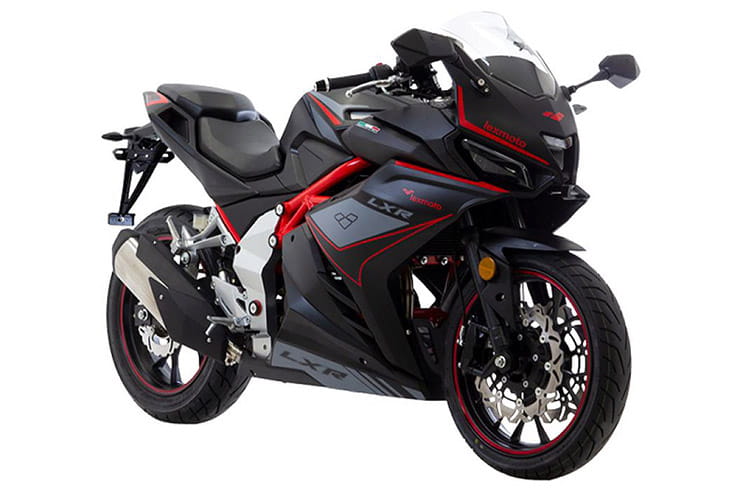 The British/Chinese firm’s successor to its hugely popular XTR125 came out in 2018 and has a helluva lot going for it, enough in fact to make it a UK best seller in the class. ‘Proper’ sports styling, roomy proportions (due to it sharing its chassis with a 300cc version), OK handling and performance from its 11bhp, liquid-cooled, SOHC, fuel-injected single and adequate spec tick most of the boxes but its biggest ace card by far is its £2200 price – under half that of the YZF-R125. No, it can’t quite match the Yamaha for performance, spec (the clocks and cycle parts in particular suffer by comparison) while reliability and residual values aren’t as reassuring, either. But at this price, complete with a warranty and the sheer sheen of ‘newness’, especially when money is tight for most prospective buyers and, considering its use, the performance differences matter little, it’s very hard to argue against. Read our full review here. 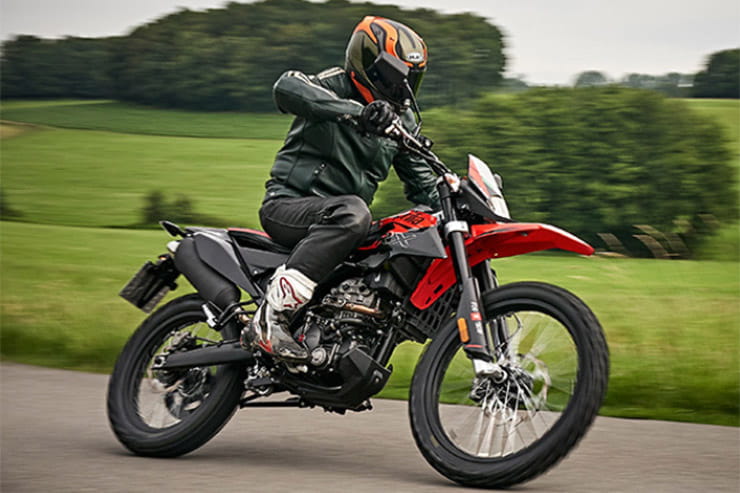 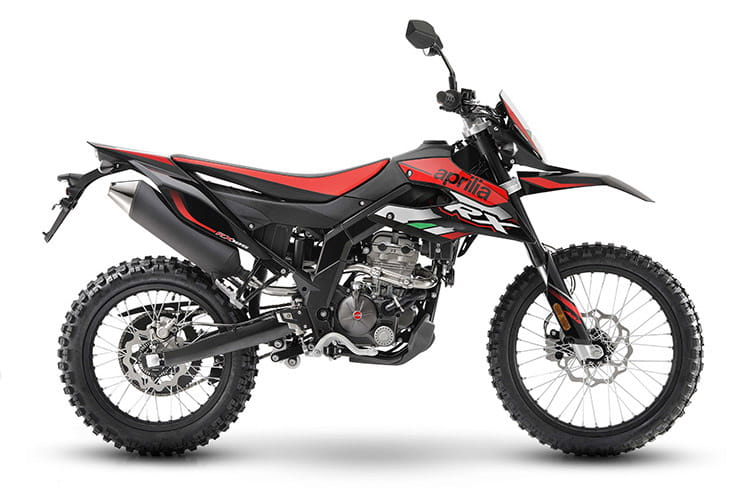 Italian exotica experts Aprilia have a proud heritage of sporty small-capacity bikes and its RS 125 sportster remains one of the most desirable of its type. But it has a similar tradition for tiddler trailies and supermotos, often sharing many of the mechanicals of their sports siblings and the RX/SX125s, introduced in 2018, are the latest examples. The RX is the trail version complete with larger, 21in front wheel, dual purpose tyres and longer travel suspension but otherwise the two share the same liquid-cooled, four-valve, four-stroke single, beefy twin spar frame, decent cycle parts including inverted forks and swish Italian styling. They’re great to ride, too, being upright, light and novice-friendly, yet also nimble, sharp and reasonably lively. But best of all, they’re also pretty impressive value, too, at around £3500 when their sportster RS brother is a full £1000 more. Read our full review here. 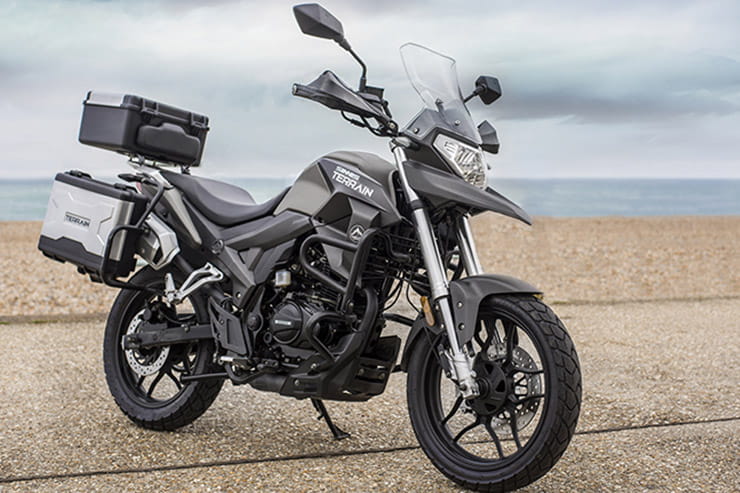 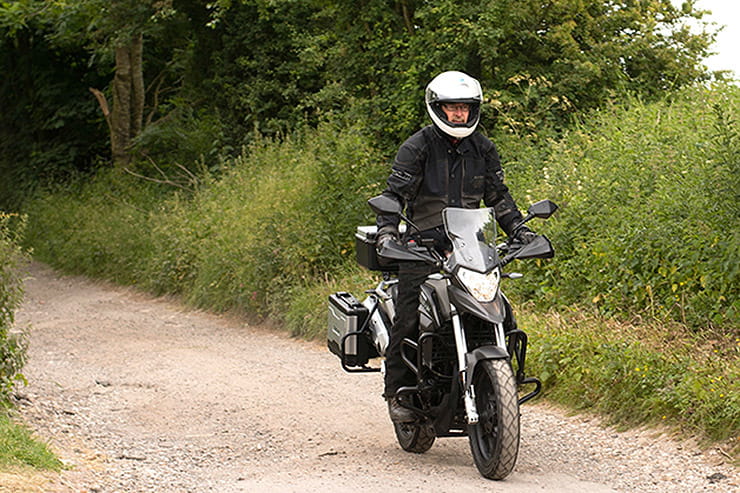 Sinnis are another successful brand of Chinese-built but British distributed small capacity bikes, ranging from budget-priced, run-of-the-mill roadsters to stylish but still affordable sportsters – in fact they’ve a full range of eight different 125s in their range – but the Terrain is surely the most striking and different. Intended as a full-sized adventure machine but with only a 125cc power plant it’s unique, as far as we know, in being a true adventure bike accessible to learner riders. And, with full-size proportions, decent spec including small screen, inverted forks, LCD dash and standard panniers, it behaves like one, too. Admittedly, with just 11bhp from its air-cooled single-cylinder motor, no real off-road ability and slightly budget build quality, its lacking a little when it comes to performance and durability but it’s still a great introduction to the breed, is a serious option for larger learner riders and, at the price, is undeniably a lot of bike for the money. Read our full review here. 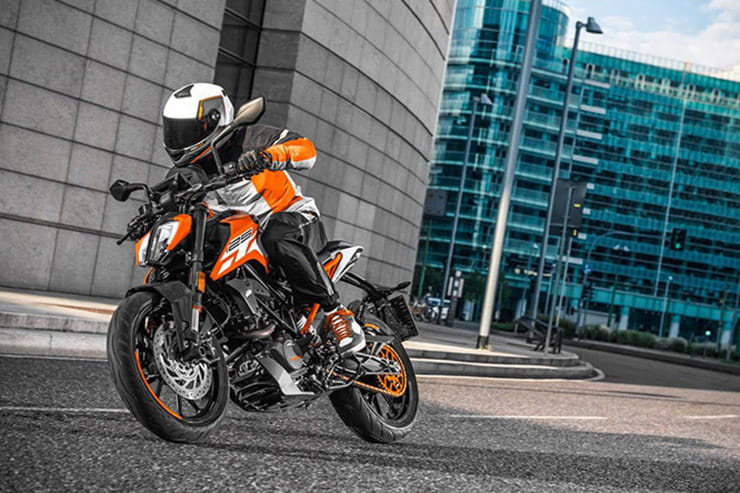 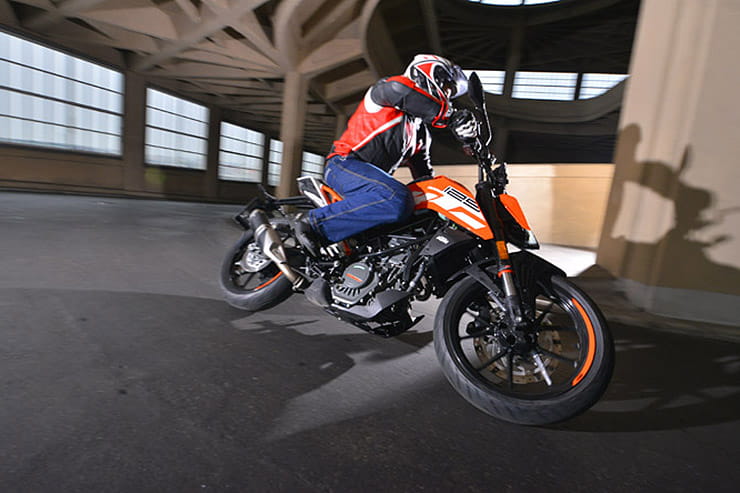 Although last updated in 2017, KTM’s junior, entry-level Duke remains, arguably, the definitive example of the 125cc funky naked roadster breed. Bold, brash and garish in its bright orange livery it’s exciting and cool at standstill and lively and fun on the move. With a lightweight, compact tubular steel chassis, a punchy, 15bhp liquid-cooled single and quality suspension, brakes and even ancillaries such as the slick LCD dash and flash LED headlamp it’s as minimal and nimble as KTM’s off-road heritage would have you expect, yet also has enough quality and class to want for nothing. At 17, no bike is cooler around town yet the little Duke is also novice-friendly and durable enough to be a great learner bike, too. The only downsides are diminutive dimensions that count against it for larger riders or longer rides and a price that’s as high as any. But if you’re happy with all that you’ll be the envy of the ‘hood’. Read our full review here. 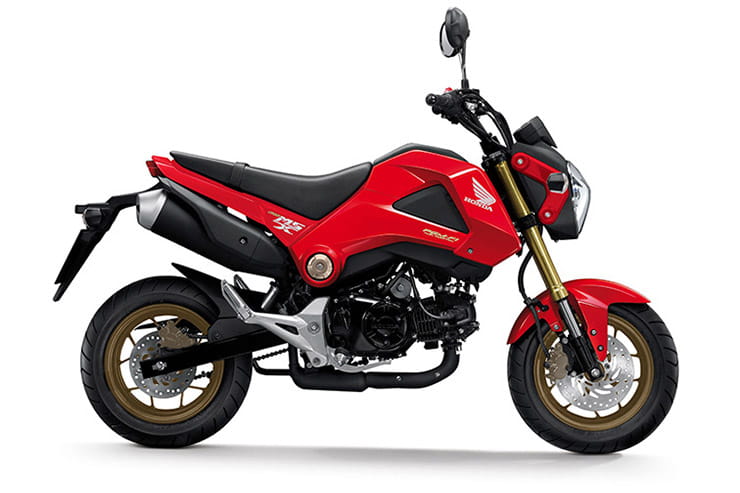 If you thought KTM’s Duke was on the small side… Sometimes, however, ‘cute’ is irresistible – and they don’t come any ‘cuter’ than Honda’s MSX125, or ‘Grom’ as it’s also called among its cult following. Inspired by Honda’s original ‘monkey’ bikes of the late 1960s and early ‘70s, the MSX was an all-new take on the breed when it was introduced back in 2013 and has proved so successful it even spawned a retro-styled spin-off, the Monkey 125 in 2018, costing £3749. MSX stands for ‘Mini Street Extreme’ and the MSX is just that: a three-quarter-scale fun bike with 12in wheels, low 765mm seat height, even lower 101kg dry weight – but virtually full-size performance. The air-cooled, four-speed single produces 10bhp, there are inverted forks, a disc brake and monoshock rear and it’s good enough, if you dare, for 67mph. Naturally, it’s a doddle to ride, too. Sure, it’s not recommended for long trips, but it’s certainly a great fun urban 125.

Read our series of features about Life with an MSX125 here. 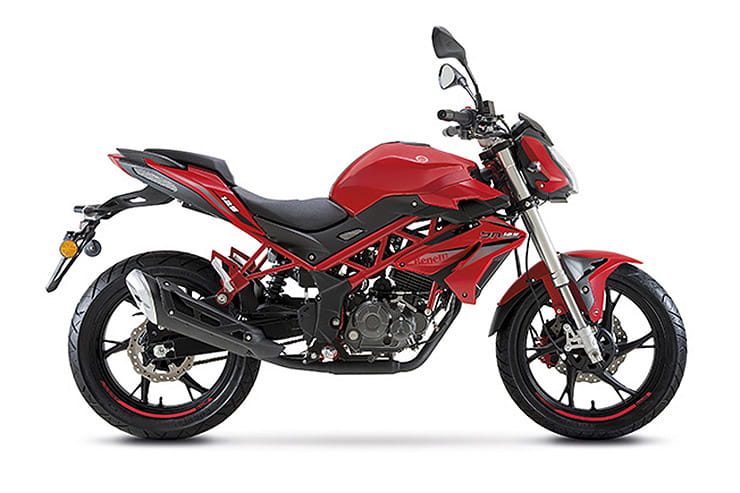 After a slow reincarnation after being taken over by Chinese giant Qianjiang in 2005, Italian brand Benelli is now producing a rapidly-growing range of Italian-designed but Chinese built machines, ranging from affordable 125 singles to stylish 500 and now even 750cc twins whose combination of Italian flair and Chinese affordability is making them increasingly desirable. One of the latest is the BN 125, a straightforward but stylish street single with more than a few shades of Ducati Monster yet also with an almost irresistible price tag of just over £2K. In truth, its spec is nothing to get too existed about: a tubular steel trellis frame holds a fairly average air-cooled single producing just 11bhp, but on the plus side it looks great, is easy to ride has a great name on the tank and can be had for a relative pittance. What’s not to like? 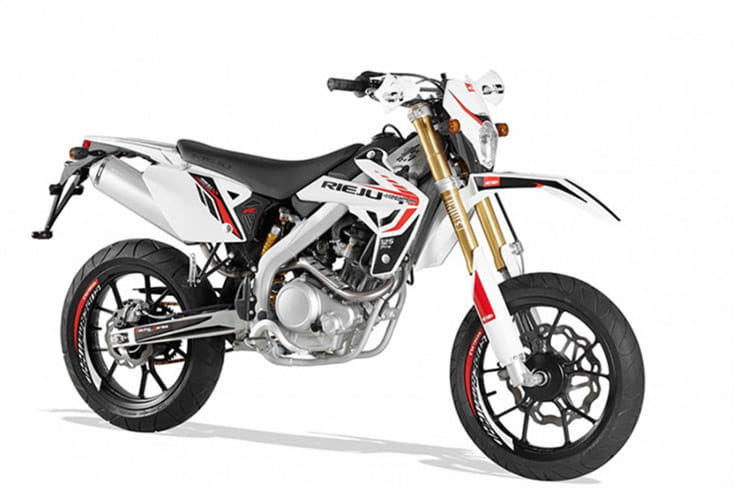 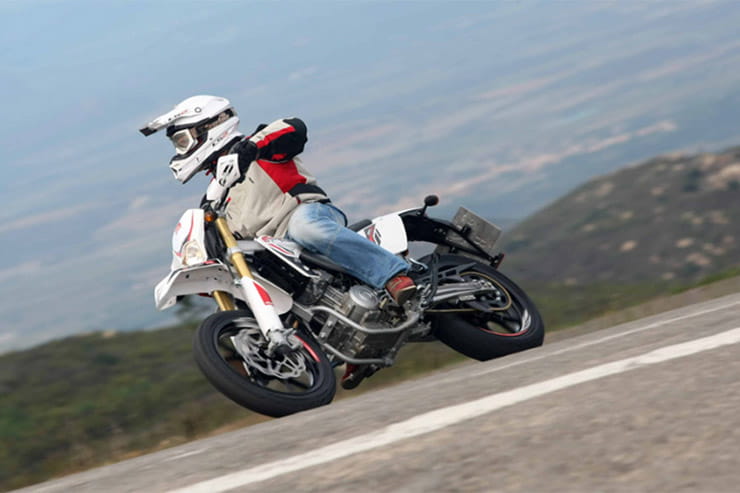 There once was a time when ‘supermoto’ 125s, trail-derived quarter-litre machines fitted with more sporty street wheels, tyres and brakes, resulting in ultra-nimble traffic carvers that were a hoot to ride, were everywhere. Yamaha had its XT and WR versions, Suzuki its DR125SM plus there were others from Japan, Italy and more – but not any longer. Today, apart from Aprilia’s worthy SX125 (see above) and a couple of Chinese offerings, only Spanish lightweight firm Rieju has any 125 supermotos that are worth their salt. The MRT 125 Trophy is its latest. Now with liquid-cooled, four-stroke power, it’s been around since 2013 and remains a strong contender for being one of the flashiest, most fun to ride and best equipped 125s around – particularly if you’ve got any sort of hooliganistic tendencies. It has 15bhp, inverted forks, racy styling, ultra-nimble handling and, short of a KTM Duke or Yamaha YZF-R125, is about as drool-worthy as a 125 gets – as it should considering its £4300 price tag.