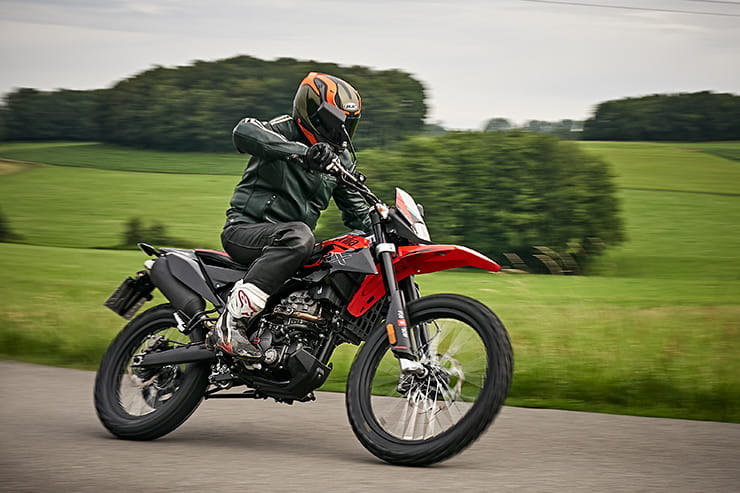 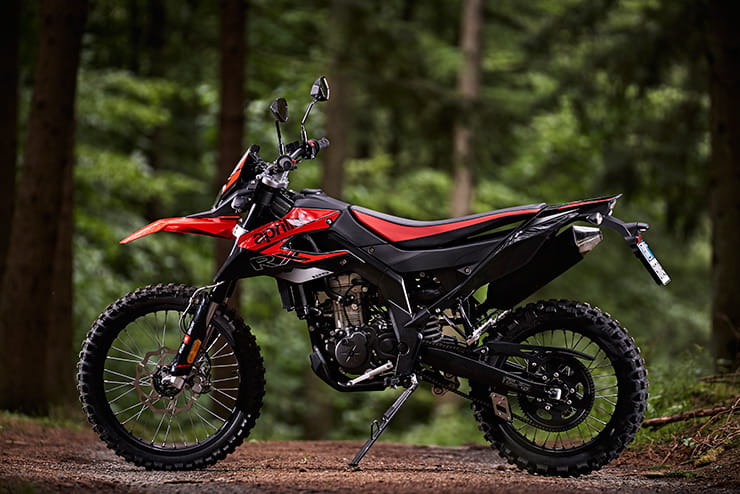 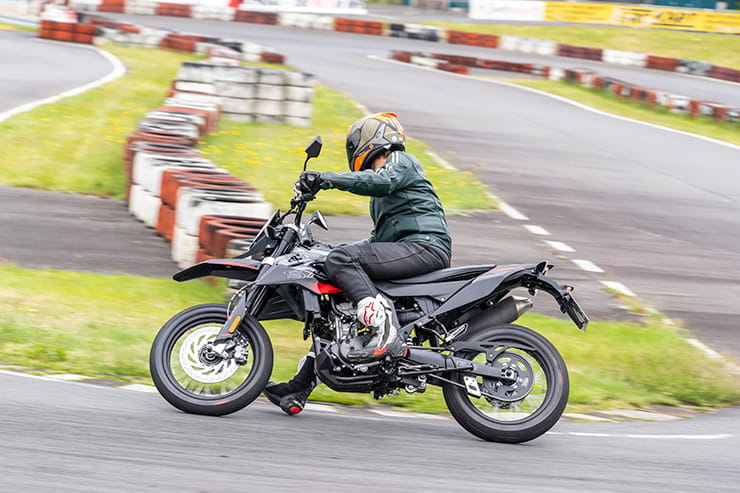 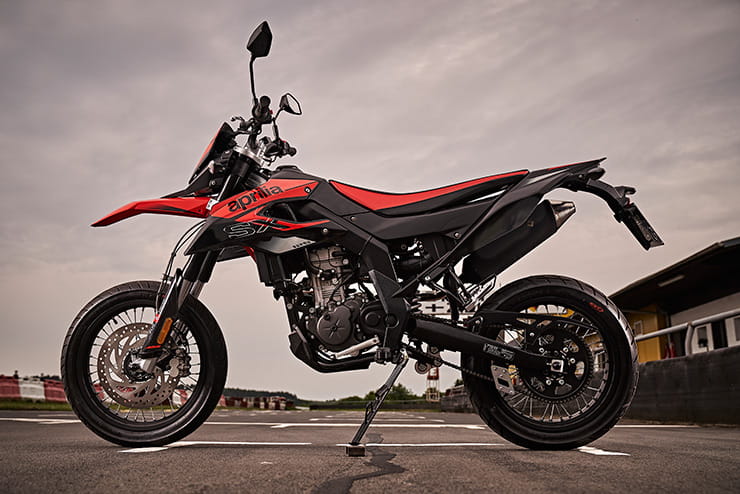 “Remember how it felt to be 17, riding a 125 for the first time?” asks Massimo Pastrello, Aprilia’s marketing bod, at the dual launches of their new supermoto SX125 and enduro RX125 at a kart track in Germany. Perhaps he’s worried BikeSocial’s cynical, world-weary, middle-aged bike hack will judge Aprilia’s new 125s harshly. As well we might; swanning about on high performance flagships makes it easy to forget how exciting, life-changing and mind-expanding 15bhp is when you’ve just graduated from pedal power.

However, Massimo needn’t fret – here at BikeSocial, expressing our inner teenager comes naturally because we’ve never actually grown up <twists baseball cap sideways on head and books another body-piercing>. So let’s roll back the years, fire up the new Aprilia SX125 and RX125, and find out what they’ve got to offer. 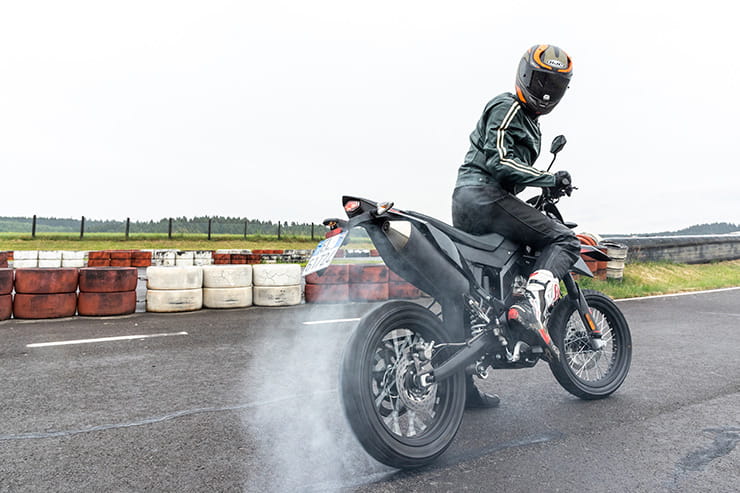 Being all serious for a moment, the SX125 and RX125 bring Aprilia’s range of A1 licence, teenage-friendly machines to a total of four bikes, alongside the sportsbike-styled RS and naked Tuono 125. In the fight against a flood of cut-price far Eastern 125s, let alone machines from more traditional manufacturers, the trick is to make your bikes more sophisticated and high-spec than everyone else’s, but also make them cheaper. The SX125 and RX125, fairly obviously, share the same engine, steel frame, swingarm, fuelling system, Bosch ABS system, ergonomics, lights, seat and styling. They differ only in wheel sizes and tyres (the SX has 17in spoked rims and CST road tyres; the off-road RX has 21in front, an 18in rear, and CST knobblies), in final drive gearing (to compensate for that change of wheel size), and in brake discs: the SX has a 300mm disc, the RX a 260mm wavy item. 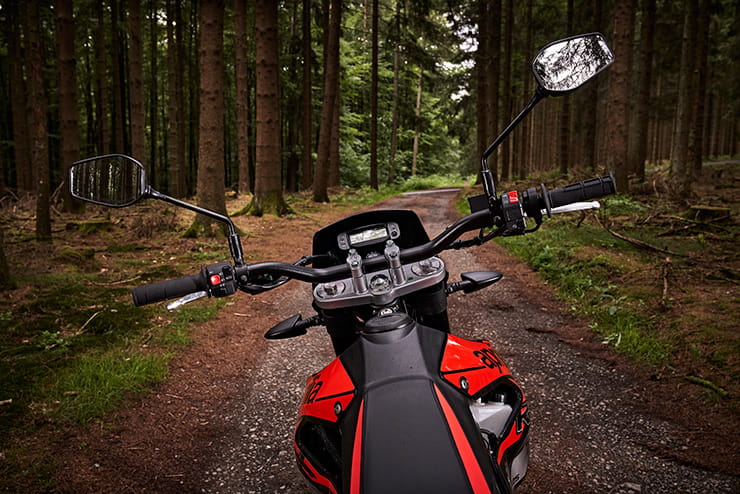 So how do Aprilia make the RX and SX so cheap? 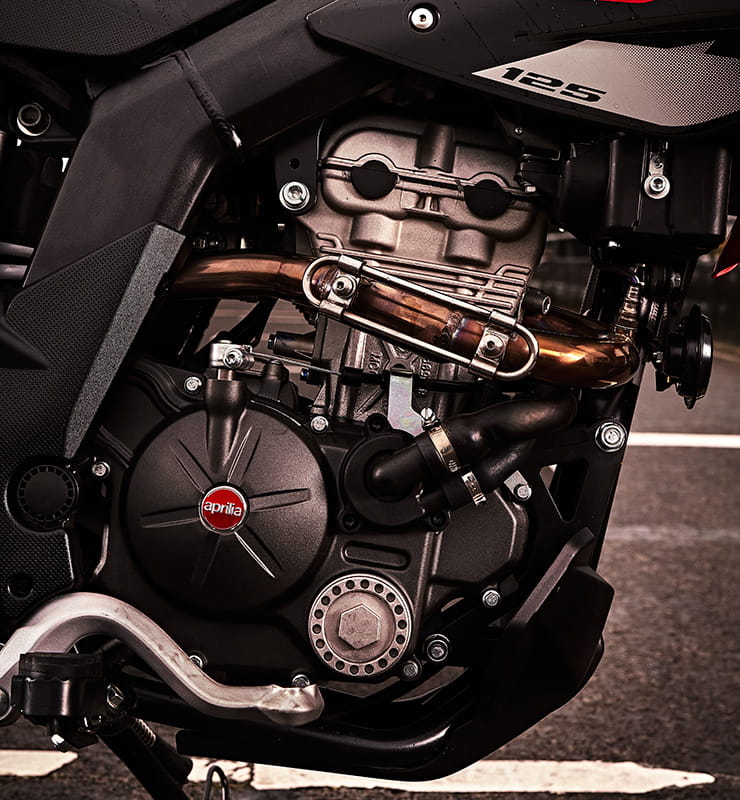 Well, the SX125 and RX125 don’t skimp on power: both are limited to an A1 licence-friendly 15bhp and peak torque of 8.3 lb.ft – which, thanks to Euro4 compliance, is down slightly on Aprilia’s torque figure for the Tuono and RS125.

So part of the SX and RX cost-cutting comes from using the same 124.2cc, four-stroke, four-valve, double overhead cam, single cylinder motor as the RS125 and Tuono 125 – the engine covers are slightly different, but the casting and internals are identical. In fact, the motor has been around for a years – built by Zongshen in China, it’s the same unit that once powered Derbi’s GPR125. Aprilia and Derbi are, of course, both owned by Piaggio, hence the penny-pinching crossover.

And, given what it’s got to work with, it’s not a bad power unit. In the absence of an adults-only quantity of horsepower, the next most important engine characteristic is being able to have the arse revved off it – and with no tacho to distract you, both the SX and RX will happily spend most of their lives swapping between fourth and fifth (inclines and headwinds limit the usefulness of sixth gear), bouncing off the rev limiter downhill. Aprilia say engine power peaks at 10,700rpm, which is crazy high even for a weeny 58mm diameter piston zipping up and down by 47mm every few milliseconds.

But the balance-shaft motor is refreshingly vibe-free – 50 miles or so pretty much flat stick on the RX felt fine, with no finger numbness – and both bikes will gun along at 70mph, eventually. Of the two bikes, the RX is nippier off the line; the SX sports a massive 62-tooth rear sprocket but the down-geared RX beats it with 69 teeth. That’s almost more than all the Bee Gees put together. The difference in gearing is meant to compensate for the RX’s larger rear wheel diameter, but in reality the off-road bike has the edge on acceleration – and that matters a lot on a 125. 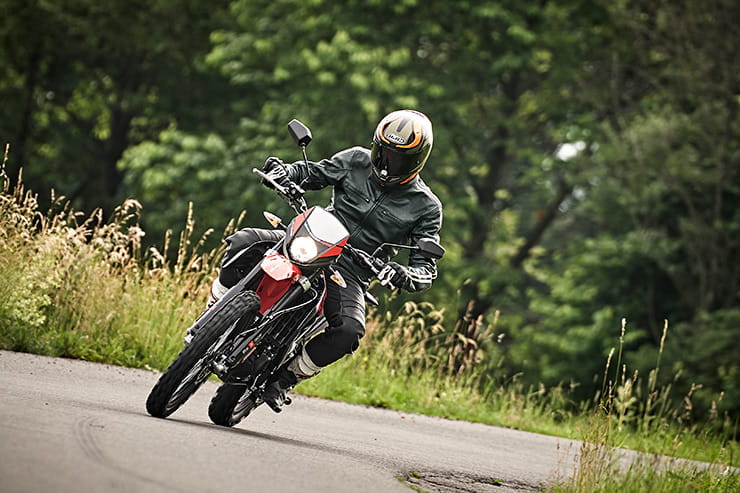 With no opportunity to test fuel consumption, Aprilia claim 35km/litre – which according to Google is 98.9mpg. That’s on the frugal side of unbelievable, and would mean the RX and SX’s 7.5 litre fuel tank would have a range of 160 miles. Not. A. Chance. Not with the fuel-injected throttle pinned wide open almost all the time, anyway. 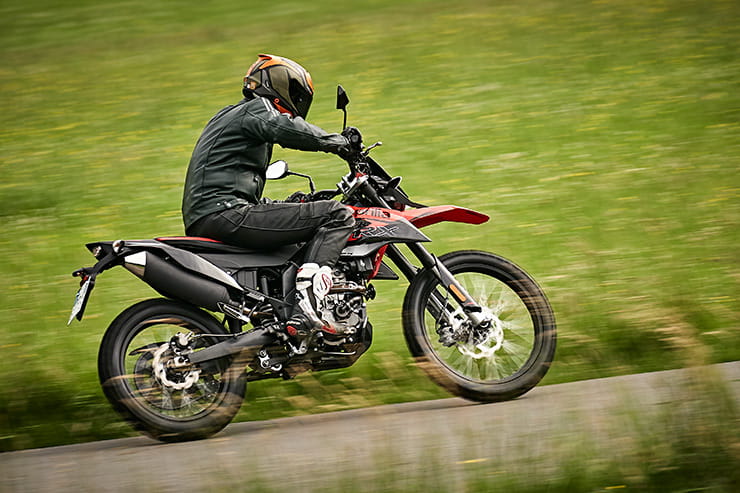 The one area in which it’s easiest to spot a budget bike is its suspension – with so little weight to lug about (Aprilia claim 120kg dry and around 135kg dripping wet – at least, until you add the rider, ahem), any crudity in forks or shock is immediately shown up.

And there is some: the unadjustable, but substantial, 41mm usd forks on both bikes are soft, collapsing like a house of cards under braking, but constantly feeding back low frequency thumping in motion, as if one of the wheels is oval. The preload-only, rising rate rear shock has a lot less give in it (which will make the SX’s 870mm seat and the RX’s 905mm perch problematic for less lanky riders). But, overall, the handling dynamic of both machines is predictable, secure and slightly beyond expectations. Neither is distractingly primitive or unsteady; instead the RX and SX have a big-bike solidity and reassurance that adds enormously to their appeal.

This is especially welcome given their Chinese CST tyres – Cheng Shin Tyres, which were called Cheng Slimes back in the 90s. The knobblies on the RX are skittish and the tread creep is, at first, off-putting – the vague, 21in front is like steering on marbles; you can feel its rubber blocks squirm as you countersteer the bars, and you can actually hear them deforming as you accelerate. In the dry, the rear has a surprising amount of grip but you’d be well advised not to go stuffing it in on the brakes.

But you can on the SX125 – also on CSTs, but this time they’re 17in road tyres and don’t suffer from the same ease of deflection and twitchiness of the RX. At the kart track, the SX is great fun barging about, backing into corners (okay, skidding a bit) and taking sweeping lines to avoid over-stressing its suspension. 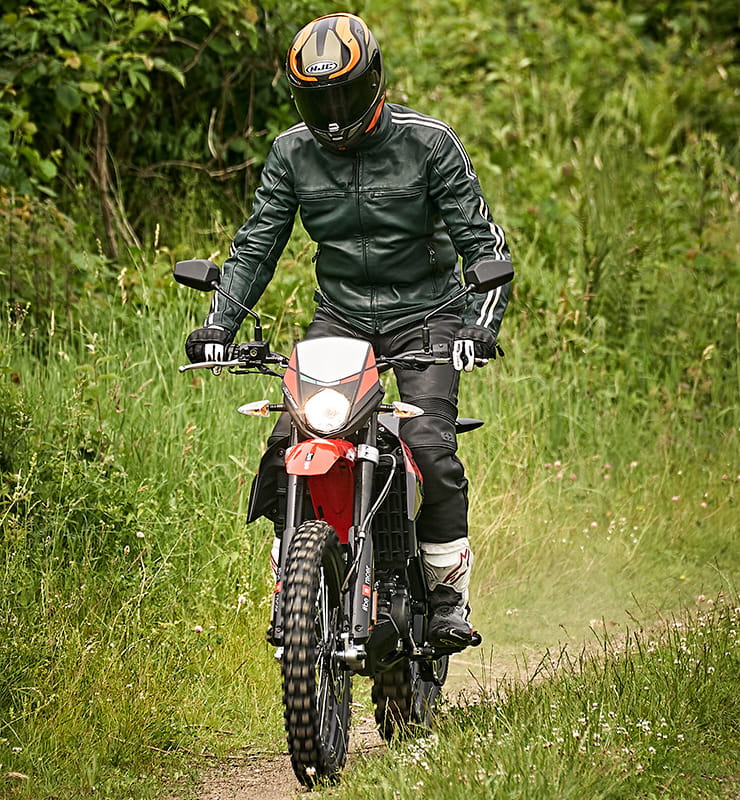 Same two-pot sliding calipers, braided hoses (quality touch) and Bosch ABS system on both machines, but the off-road RX gets a smaller 260mm wavy disc (probably because there’s less grip available at the front from that knobbly) while the SX has a 300mm disc. There’s plenty of biting power at the lever to overwhelm the tyres.

The Bosch ABS on both bikes, like the RS125 and Tuono 125, features what Aprilia call anti roll-over technology – they say the system detects front and rear wheel speed differential, and if the front is significantly slower than the rear under braking, the ABS cuts out momentarily to keep the back wheel on the ground. I might be wrong, but I thought the point of ABS is to release the brakes when it detects the wheels locking-up anyway? I can’t think of a bike with ABS that will stoppie the rider over the bars.

Neither SX nor RX rear brake has ABS; that’s a bonus for the off-road RX125 (where you might want to lock up the rear) – but you have to question its omission on the road; a novice rider could easily stamp on the rear brake instead of the front in panic, and lock it up. 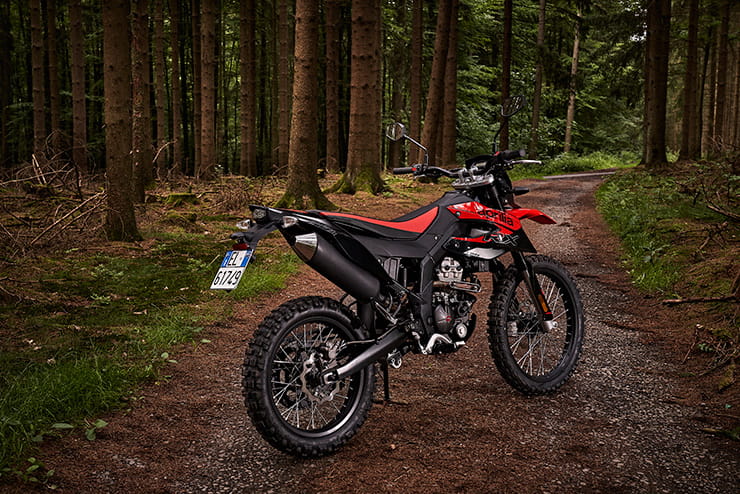 With thin, hard, off-road seats and a 125 single thwapping away beneath you, the SX and RX aren’t blessed with long-distance luxury – and after half an hour you’ll be shifting about from cheek to cheek. But that aside, they’re pretty comfy – there’s no wind blast to speak of, the engine is smooth, the riding position is spacious and natural, and the ride quality doesn’t intrude. Touring would be a stretch, but for short hops there are no issues. Apart from burning a hole in the right calf of my leather trousers when I stretched my leg out and unknowingly rested it on the exhaust header for a few seconds. 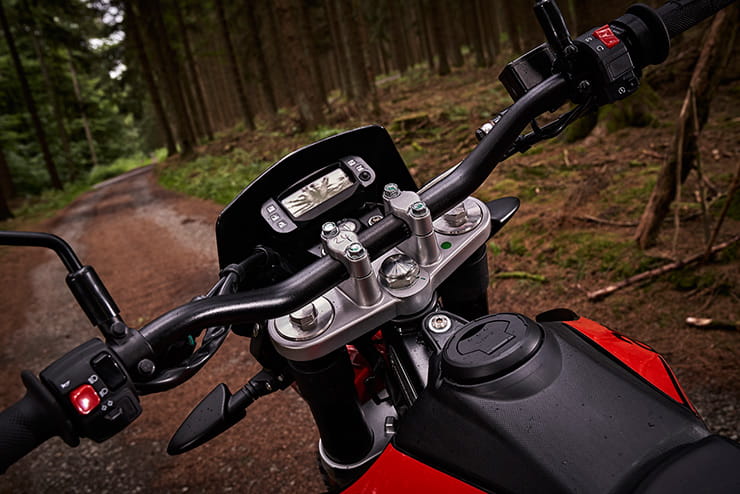 Good and bad – the dash is a miniscule, hard-to-read LCD lozenge which looks like it cost 50p but carries a lot of info: speed, engine temp, service, clock, odometer (Aprilia charmingly call it a ‘travel diary’), two trips, battery voltage, max speed, plus the usual bunch of idiot lights. Mirrors are good; self-retracting sidestand is infuriatingly needless – even on level ground, it’s easier to get off the bike and then put the sidestand down. I predict many SX and RX125s will end up falling over.

Of the pair, the RX125 makes more sense because with its off-road capacity it’s more versatile than the SX – who doesn’t want to bomb about off-road, probably illegally, once in a while? The lack of grip from the 21in front can be cured with better off-road rubber – whereas putting stickier tyres on the SX will probably just expose the suspension’s shortcomings still further. So of the two, the RX gets my vote.

But it’s hard not to come away from either the SX or RX without feeling distinctly impressed by both. Maybe it’s a case of low expectations, but they turn out to be way more fun than the po-faced RS125 and Tuono 125. Those two – and many other premium 125s – feel like they’re trying to be big, grown-up machines but chuffed along by small, underpowered engines. The RX and SX have a light, lithe, simple honesty to them; and their ambitions (and handling) are perfectly in-line with the output of the engine. My teenage years are long gone, but I’m sold. 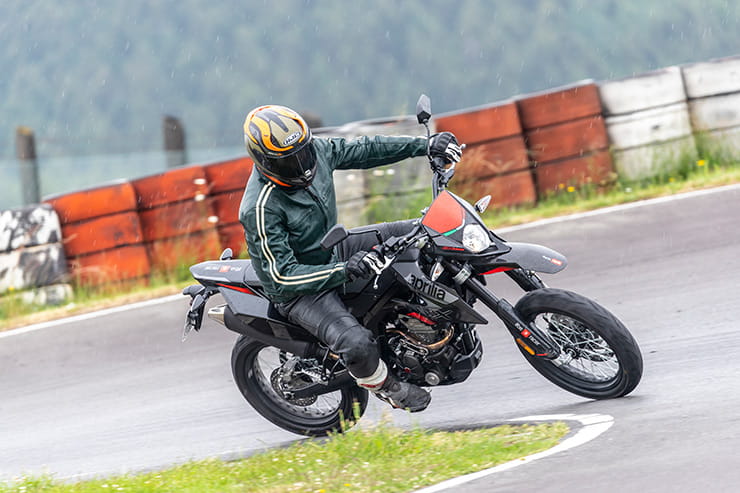 Three things I love about the RX and SX125…

Three things that I don’t… 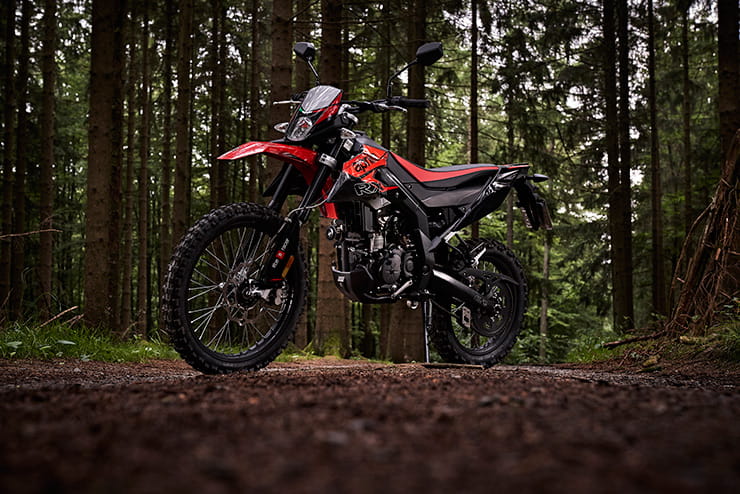