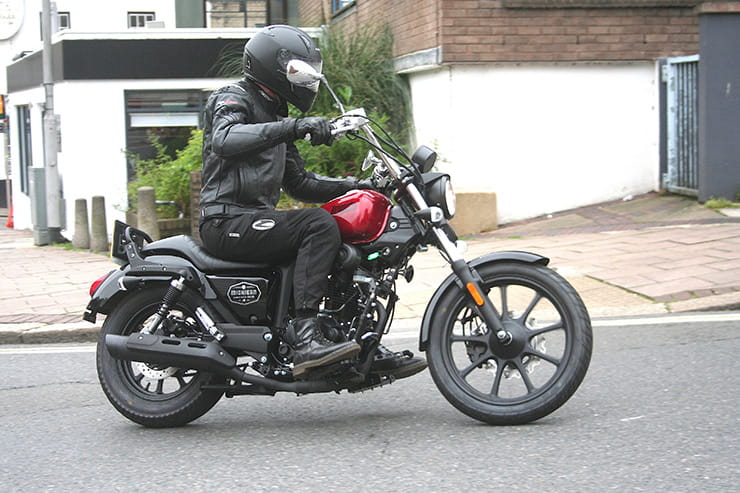 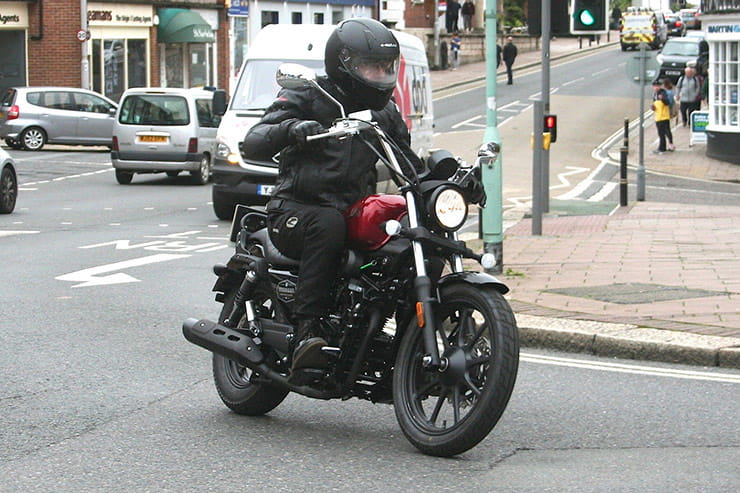 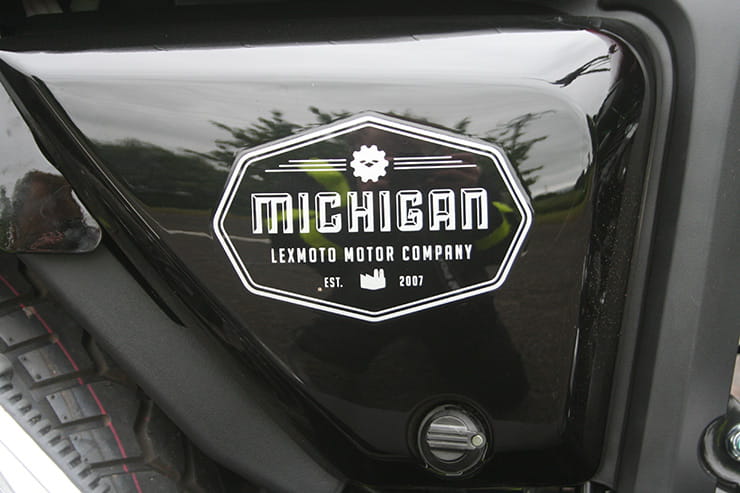 Do you like Harley Sportsters? If so, you're not alone because H-D's 'baby' V-twin is a bit of an icon and has been around for over 60 years. But it's not cheap – current prices start at £8,145. If your budget doesn't stretch that far, then help is at hand. The Lexmoto Michigan apes the Sportster's styling as closely as it can this side of a corporate lawsuit, and it has one huge advantage over the original.

The Michigan comes in at £1,649.99, so you almost buy five of them for the cost of the most basic 883cc H-D. This is a cheap bike, and Lexmoto's philosophy has always been to keep prices as low as they'll go – you'll need to pay for the VED and registration fee, otherwise that's the on-the-road price.

There's a catch, which you've probably already noticed. The Michigan is a 125, sharing its power train with some more prosaic commuter bikes in the Lexmoto line up. But that's not necessarily a bad thing, and with 10.5bhp on tap, power is about average for a budget 125. The good news is that the Michigan is very easy to ride in town, tractable at low speeds, quiet (the styling job doesn't extend to Harley's potato-potato exhaust note) and smooth. If anything slows progress, it's that the wide and high bars inhibit filtering when the going gets tight – the Michigan is over 100mm wider than some Lexmoto 125s. Use the revs and it's also quick enough to get safely away from red lights, winding up to an indicated 65-70mph, holding 60-65mph on the flat – true speeds will be lower, but the Michigan is quick enough not to be bothered by trucks, while the balance shaft motor keeps vibration in the background. 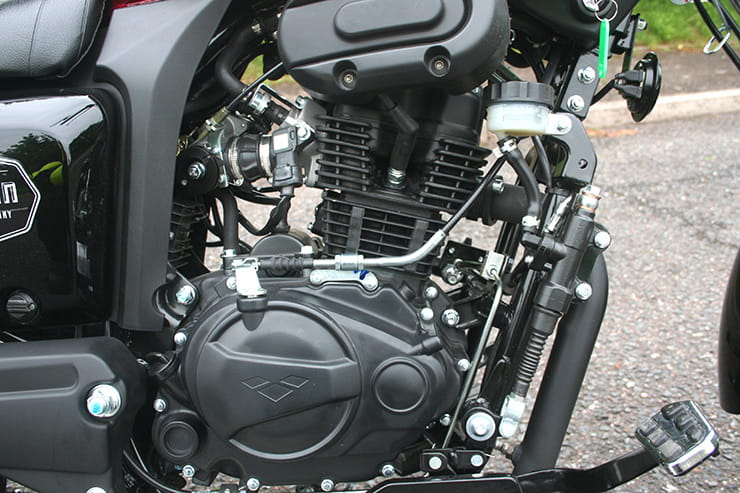 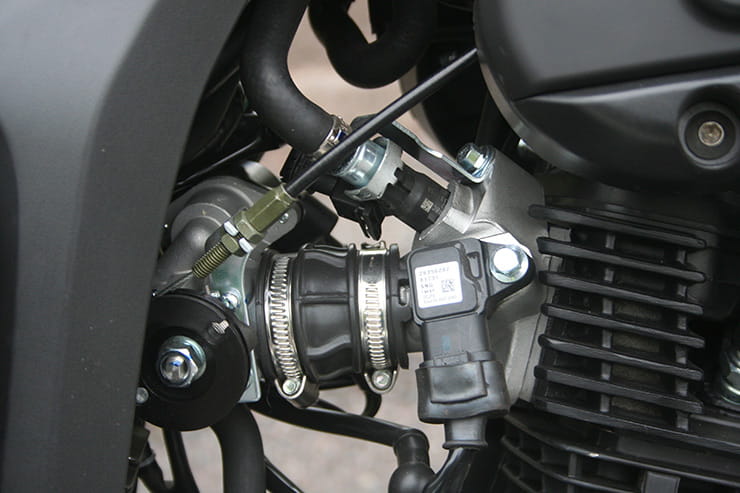 At this price, you don't get a high tech four-valve liquid-cooled 125cc motor. But the Michigan's two-valve air-cooled single does the job, with the added sophistication of a balance shaft, plus fuel injection, which all new 125s have now. Likewise, the gearbox has five speeds rather than six, but that's something we can live with. What the Michigan doesn't have is the stainless-steel exhaust of its ZSFX stablemate, which costs only £50 more.

Lexmoto claims an official economy figure of 143mpg, but no one's likely to achieve that in the real world, unless their commute consists entirely of a steady 25mph in top gear. But geared 125s are famously fuel-efficient, and the Michigan should prove no exception – we'd expect 90-100mpg. At 13.5 litres the tank isn't huge, but plenty big enough for commuting. And the Michigan will be cheap to service – a set of brake pads costs just £8.80.

There's a reason why the custom style is popular with 125 riders – a low seat is part of the deal, and the Michigan's is just 785mm off the ground, which can boost confidence (and not just for those with short legs). Soft front forks and old-school twin shocks don't bode well for good handling, but the Michigan is pretty secure. The wide 15-inch rear and narrow 18-inch front Cordial grip well, while the wide bars make tipping into a corner very easy. And being a 125, the Michigan is a lightweight at 143kg, so easy to steer, manoeuvre through traffic or push into the garage. 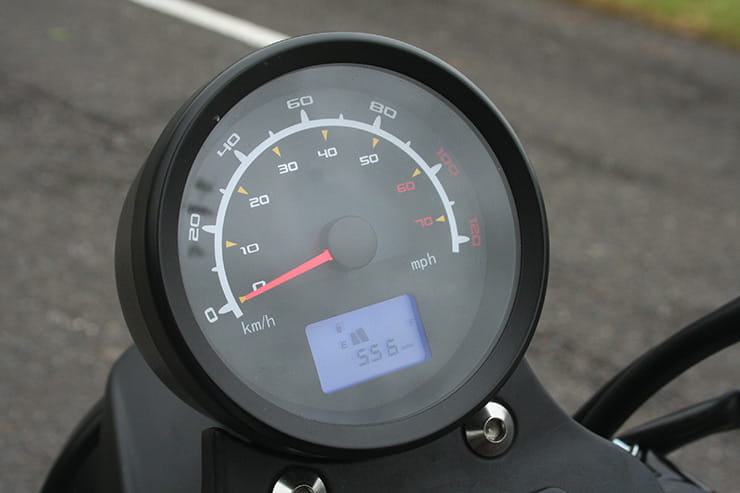 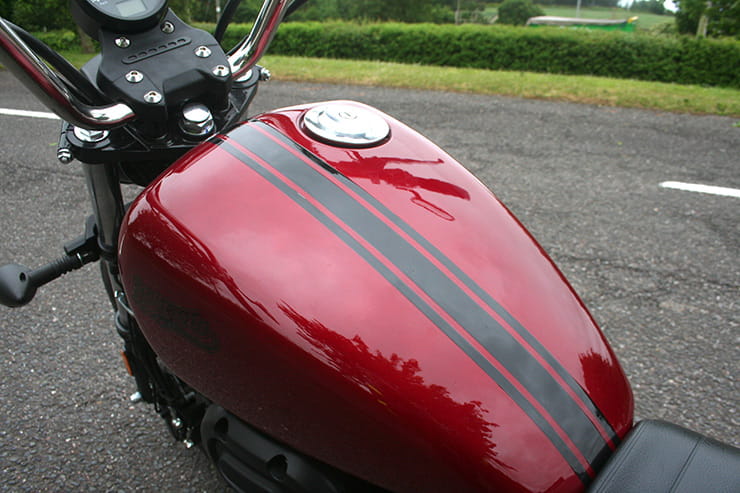 All A1 class bikes and scooters (125s, in other words) must offer either linked or ABS brakes to meet Euro 4 regulations. To keep costs down, all the Lexmotos go the linked route, and on the Michigan, they work well – using the pedal brings in front and rear together, well balanced, while the bar lever operates the front brake only. My only criticism of linked brakes is that you can't use the rear brake only, which is better for balance at very low speeds.

Better than you might think. The riding position is 'in the wind' but you're never really riding fast enough for this to be a problem, and the low seat is pretty comfy, at least for the rider. As for luggage, a pair of slim panniers are optional, and Lexmoto's Business Manager actually rode the test bike to London and back, living to tell the tale. He's quite a big lad as well. 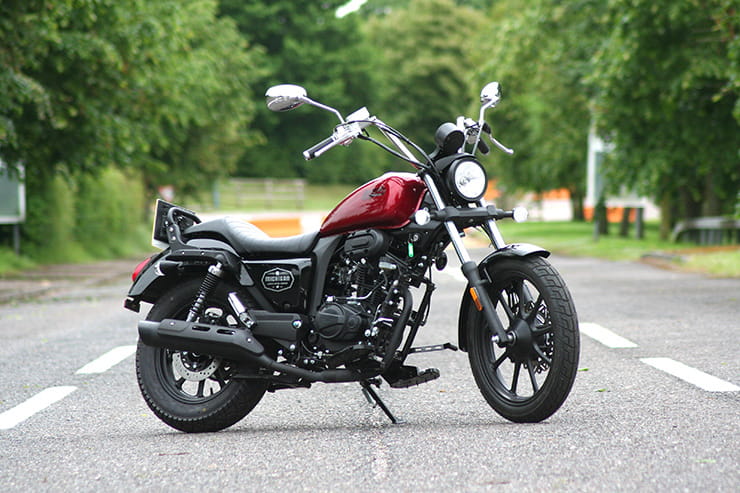 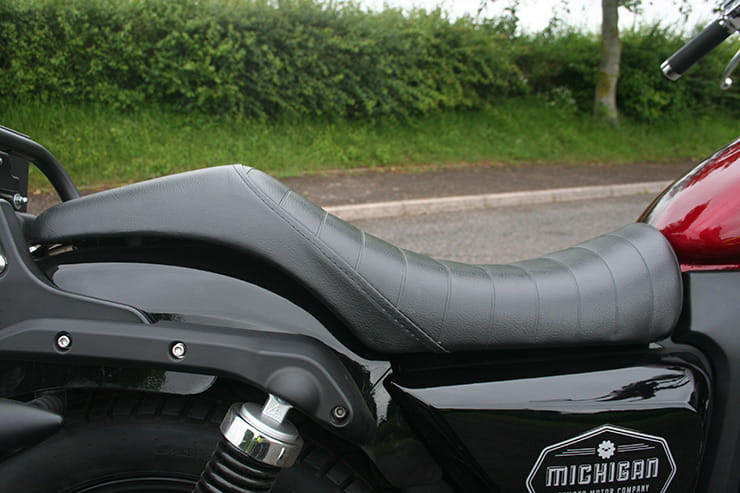 Not much. Instrumentation is limited to a speedo, fuel gauge and trip meter – anything more would spoil the Sportster illusion. Those panniers cost extra, but only £79.08, and they're essential unless you rely on a rucksack.

You'll either love the Michigan for its style, or dismiss it as a brazen fake. I'm inclined to admire its bare-faced cheek, and the fact that so many little details from the Sportster have been included. Plus with the panniers it would make a decent commuter. Route A66, here we come...

Three things I loved about the Lexmoto Michigan...

Looking for motorcycle insurance? Get a quote for this motorbike with Bennetts bike insurance
Recommended articles