When you’re starting out in motorcycling and are looking to buy a bike, quite often one factor is more important than any other – affordability.

After all, for most, the start of your road motorcycling ‘journey’ at 17 or so by definition coincides with when you’ve the least earning power and thus, unless you’re very lucky, money available.

And while the surge in PCP deals usually makes new bikes more accessible to those on a restricted budget, they don’t work for all. Plus, it’s also natural for inexperienced newcomers to want a new machine, with the reassurance of manufacturer warranties and dealer back-up that brings.

So, with all that taken into consideration, what are the cheapest new learner bikes – in this instance we’re concentrating on the most popular learner category, 125s.

It’s worth saying from the outset here that some of the names and bikes we’ve come up with will be unfamiliar. If cheapness is all, as with any product, we’re not talking about the most familiar, proven brands. So, you won’t find any Suzukis or Kawasakis – their current cheapest 125s are both over £4000. Likewise, there’s no BMWs, Ducatis or Triumphs. Although Honda and Yamaha, to their credit, come close with their CB125F (£2829) and YS125 (£2899) respectively.

But there’s no getting away from the fact if you want cheap, we’re talking about lesser known, mostly Chinese manufacturers and don’t be put off, the range of bikes they offer, even in this most budget bracket, is more varied, stylish and appealing than ever. Don’t believe us? Here’s our pick of 10 of the current best… 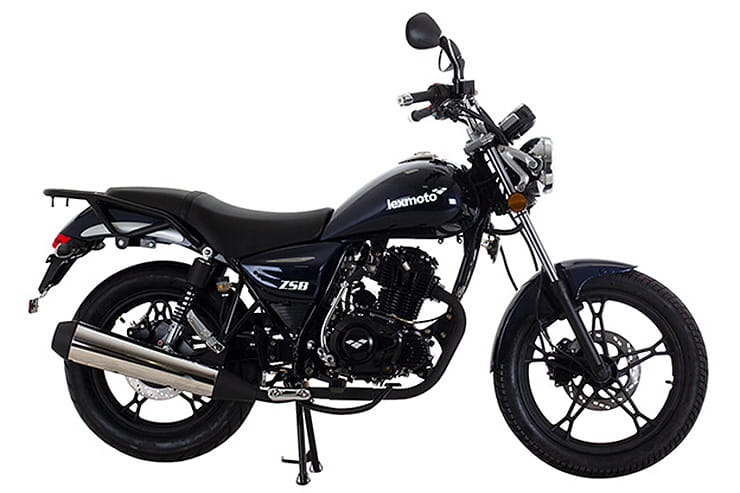 The ZSB was the UK’s cheapest 125 when Bikesocial reviewed it a few years ago (although it was even cheaper then) – and it still is today. That in itself makes it worth a look. As you’d expect it’s a no-frills, straightforward machine: Chinese-made it’s brought into the UK and rebranded by UK discount bikes specialists Lexmoto, who’ve built up a deserved reputation as a market leader in recent years. As such, the custom-styled ZSB is about as basic as they come with an air-cooled single-cylinder motor producing a modest 11.4bhp making it good for about 65mph; a tubular steel single loop frame; rudimentary twin shock suspension plus single dial instrumentation incorporating an LCD panel for speedo, fuel gauge and indicator. That said it does what it sets out to do more than adequately, comes with a luggage rack and cast alloy wheels and is a doddle to ride. For the money, it’s almost impossible to criticize. 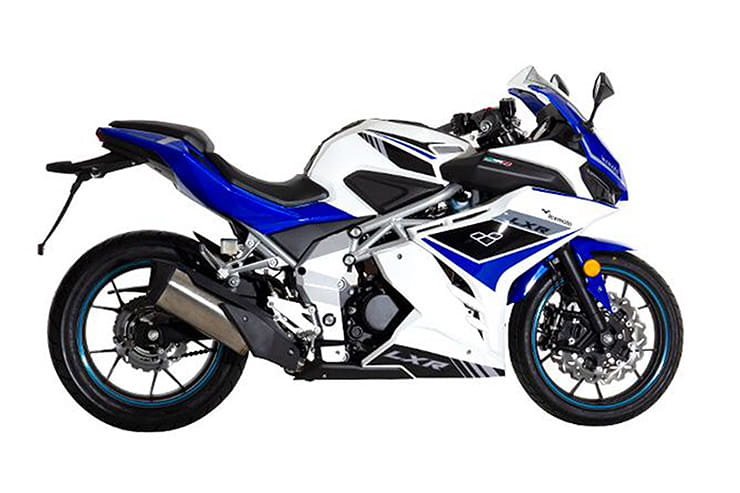 From one Lexmoto extreme to another… If the Chinese budget bike specialist’s ZSB is its cheapest 125 offering, then the slick new LXR sportster is its priciest – although at just over £2K it’s still something of a bargain. So no, the LXR isn’t included here as it’s one of the very cheapest 125s, more to bookend and demonstrate the whole range of Lexmoto 125s, which there simply isn’t room to include all of here. In fact, as we write, there are a full 10 other Lexmoto 125s, ranging from £1399 roadsters to £1999 supermotos, with customs, sports nakeds and everything else in-between, currently between these two. If you can stretch to it, though, the flagship LXR is definitely worth a look, being the newest and most stylish sportster in our selection, boasting snazzy, Fireblade-esque styling, an MV-alike tubular steel trellis frame with cast alloy side sections, twin front discs, monoshock rear and liquid-cooled motor. In fact, all of that, for this money, is something of a steal. 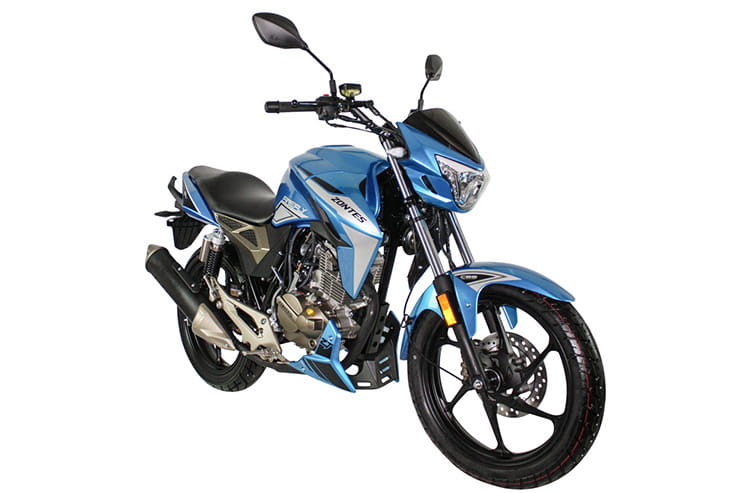 Zontes are another Chinese brand who’ve come on in leaps and bounds in recent years now producing not just five different affordable 125s, starting with the Firefly, but also for 2019 including a range of stylish, A2-compliant, single-cylinder 310cc machines – and all at very tempting prices. Brought into the UK by distributors Clements Moto, who also import Motorini and Baotian machines, the roadster Firefly is its cheapest model, although going by the spec you’d be hard pushed to tell. The Euro4 compliant, fuel-injected single is carried in a tubular steel twin shock frame but, compared to the Lexmoto ZSB, looks far more modern thanks to slick, angular styling including a headlamp cowl and LED lights, cast alloy wheels and decent instruments which comprise an analogue tacho with a separate LCD panel for speedo, odometer, gear indicator etc. Like Lexmotos 125 machines it also now comes with a two year parts and labour warranty for added peace of mind. 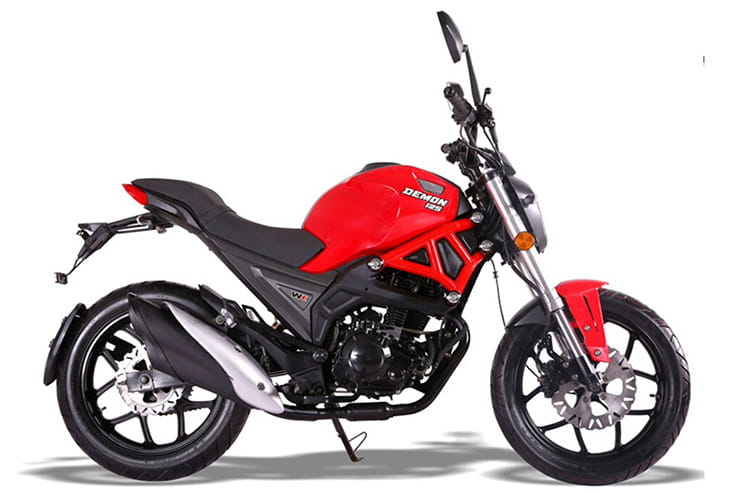 WK are another prominent UK company who’ve grown substantially in recent years based on a business model similar to that of Lexmoto whereby Chinese-built bikes are imported into the UK and then sold under the WK brand via WK dealers. Starting out with smaller, simpler machines, WK’s range now includes 50s and 125s, the cheapest of the latter being the WK Scrambler from £1799 with the newest and most stylish being this Ducati Monster-esque Demon priced at just under £2000. Stylish it is, too. The lattice style frame is a virtual spit of the Italian, as is its curvy red tank, inverted forks and snub headlamp. Instead of a liquid-cooled V-twin, though, there’s an air-cooled single cylinder motor. But hey, when it looks this good, for this money, who cares? Oh, and while we’re on the subject of 125cc lookalikes, WK also do the £1899 Colt, which is a more affordable twin to Honda’s trendy Grom mini-bike, as well. 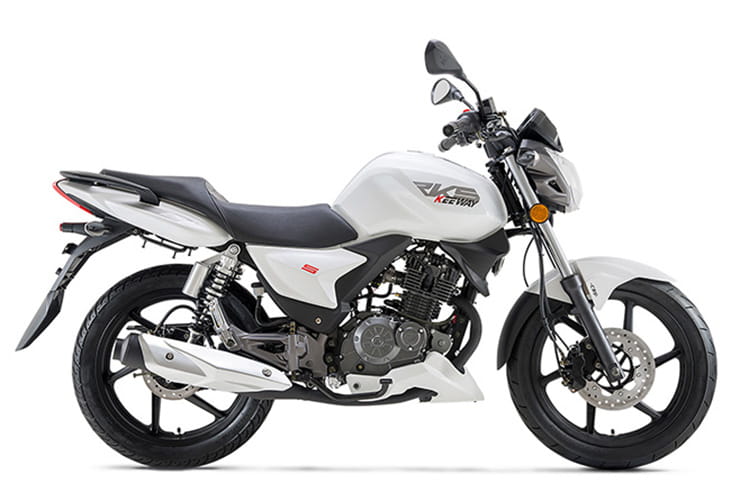 Keeway are another of the large Chinese motorcycle brands, in fact they’re one of the brands of the huge Qiangjiang Group, China’s largest motorcycle manufacturer, which now also owns Benelli, and are brought into the UK by MotoGB, the UK’s largest independent motorcycle distributor, both factors which bring some reassurance. They specialize in 125s, too. The RKS 125 roadster is its cheapest offering, starting at £1899 plus OTR charges, with this slightly higher spec Sport version £100 more. But they also offer the Superlight custom (£2099), TX125 trailie (£2199) which also comes in supermoto trim, K-light bobber (£2299); RKF 125 sport naked (£2499) and top of the range RKR125 sportster (£2499). All are based around similar four-stroke singles, are stylish and decently built, come with two year warranties and are available on HP with a £99 deposit from as little as £39 pm. 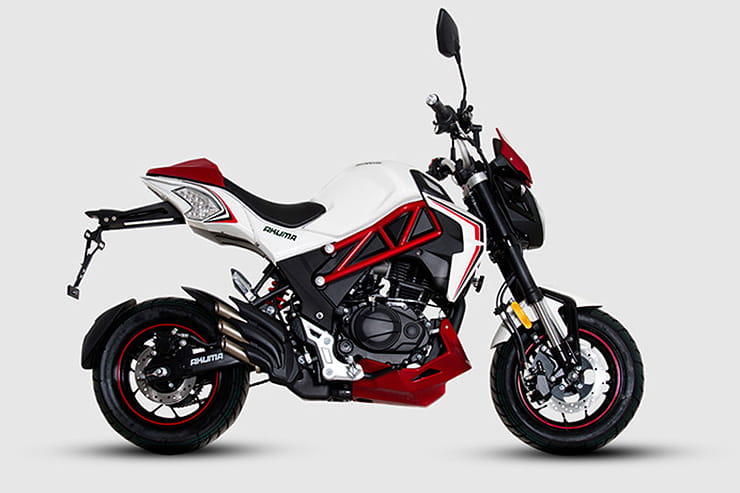 Similar to Lexmoto, Sinnis is a UK budget motorcycle brand founded in Brighton in 2006, which brings into the UK motorcycles made by one of the large Chinese manufacturers, in this case Jinan Qingqi to their own design but with Sinnis branding. The first of these, based around an old Suzuki-design engine, was the Sinnis Apache 125. The company has grown significantly since, its bikes have evolved i9mpressively, Sinnis now have 135 dealers in the UK and claim to be the No. 1 for small capacity bikes and scooters in the UK. It currently has a range of eight different 125cc bikes, the cheapest being the Akuma, a Honda Grom-style minibike with trellis frame, LED lights and more but they also offer the Bomber café racer (£2145), Hoodlum bobber (£2199), RSX125 roadster (£2199, Apache supermoto (£2399) and Blade X trail bike (also £2399). 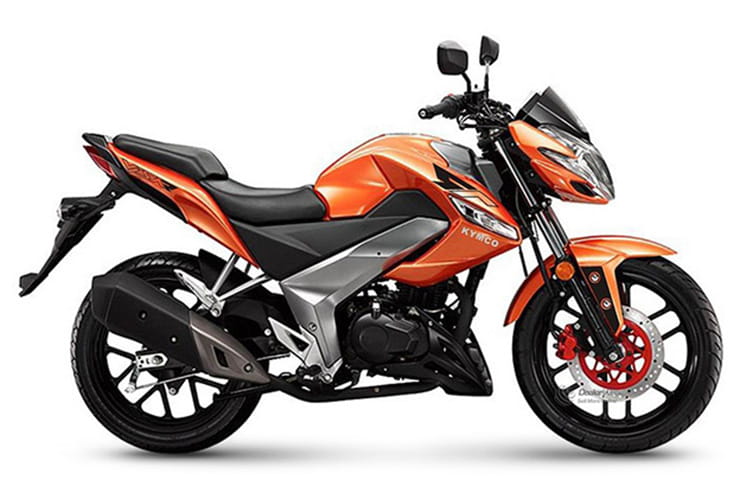 Just to prove that not all of the cheapest 125 motorcycles available are Chinese, the most affordable offering from increasingly respected Taiwanese firm Kymco also makes our Top 10. Founded in 1963, Kymco (or Kwang Yang Motor Co) produces over 570,000 scooters, motorcycles and ATVs a year, with scooters from 50cc to 550cc, and even produced Kawasaki’s 125 and 300cc scooters under agreement. The VSR is a sharply-styled roadster powered by an air-cooled, four-stroke single and has a few neat touches such as faired-in indicators. Kymco are also offering it on a PCP deal, which requires a £416 deposit followed by monthly payments of just £39. 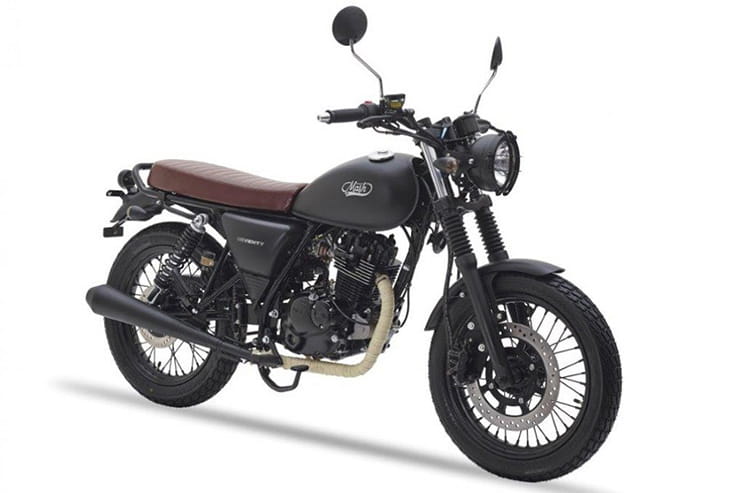 MASH motorcycles are one of the new breed of fashionable, affordable lightweight motorcycle brands that use Chinese mechanicals combined with European hipster style to deliver stylish, affordable retro runabouts in the classic British style. Launched in France but brought into the UK, their models are mostly air-cooled singles, originally 125,s but now have a plethora of models from 50 to 650cc. Of its five roadster 125s, the latest – and most affordable – is the Seventy, which follows a familiar format of air-cooled single cylinder motor, simple tubular steel twin shock chassis, single front disc brake and basic clocks. More than most, however, MASH excel at classic, retro styling touches, so the Seventy also has the fashionable brown seat, fork gaiters, semi-knobbly tyres and even a wrapped exhaust. Bikes don’t get any more fashionable for the money. 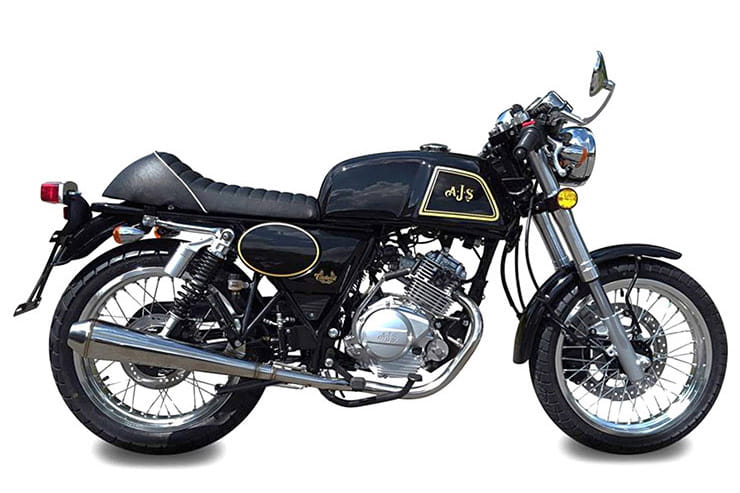 Just when you were perhaps starting to think that all of the cheap retro bikes available come with modern names you’ve never heard of, how about this – the AJS Cadwell 125 with not just one, but two great British motorcycling names. If you don’t already know AJS are one of the great, historic British biking brands, right up there with Triumph and BSA and most famous for their world beating racers of the 1930s and ‘40s. Although it collapsed with most of the rest of the British industry in the 1960s it was restarted on a much smaller scale in the 1970s as an off-road specialist, then, in the late 1990s, began importing and re-badging small, affordable Chinese machines, like others included here have since. More recently some of these have begun to take on classic British styling, in what AJS calls its Heritage range. The roadster Cadwell 125, café racer Cadwell Clubman (pictured), Tempest Roadster and Tempest Scrambler 125 are the result. Mechanicals and performance are much like many of the other bikes here, being an air-cooled 125cc single in a simple tubular steel twin shock frame with modern additions. But the style – and name on the tank – lift it to another level! 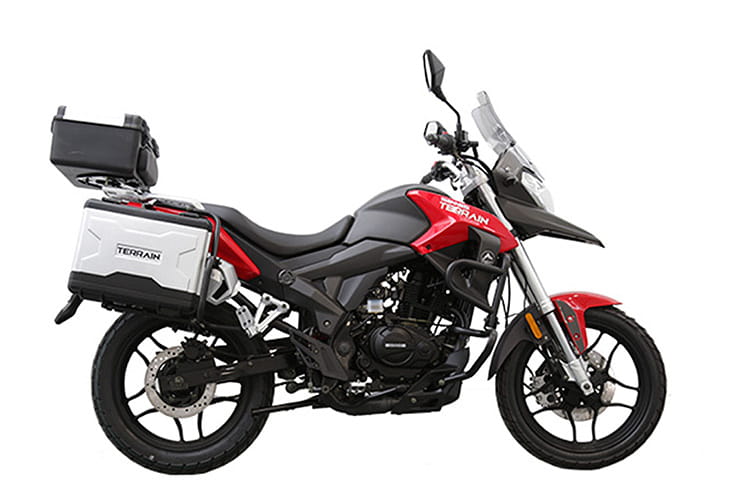 Last but by no means least, and certainly not the cheapest 125 available, is the new Sinnis Terrain – included here as it’s by far the most sophisticated and lavishly-equipped ‘cheap’ 125 currently available. Effectively a 125cc adventure bike, the Terrain may still be powered by a simple, air-cooled single cylinder motor producing just 11bhp but with adventure styling including substantial fairing, luggage kit (with increased luggage capacity available as an option), USB charging point and stylish clocks, it genuinely has true adventure bike appeal – and all for under £2500! Who said adventure bikes were expensive?