One of the most distinctive trends or fashions in recent years has been the rise of the ‘bobber’ – but what is it exactly? Essentially it’s a type of cruiser or custom – but a very specific one. The term actually dates back to the US in the late 1920s where the practice of chopping down bikes, often Harleys, to their bare bones to reduce weight and simplify them became fashionable. So mudguards or fenders got ‘bob-tailed’ or given a ‘bob-job’ (later becoming ‘Bobbing’), fancy paint was eschewed for plain or matt black, just a small, single seat was used and so on. Most of these bikes also had small wheels with fat balloon tyres, which were the norm at the time.

Post WW2 the fashion arose again when ex-servicemen in particular wanted to put their own stamp on the masses of ex-military Harleys available. Then, if you wind forward to the mid-Noughties, with pioneering factory versions such as Harley’s Street Bob and followed since, on the rise of the custom scene, with examples from Triumph, Moto Guzzi and more and it’s clear there’s suddenly more available than ever to choose from.

The appeal? Bang on-trend cruiser style that’s easy to ride, affordability (they’re usually cheaper than the equivalent factory cruiser simply because there’s less to them) and a blank canvas ripe for customizing appeals to many. Which you should go for, though, is less easy – so here’s out guide to 10 of the current best, in useful ascending price order… 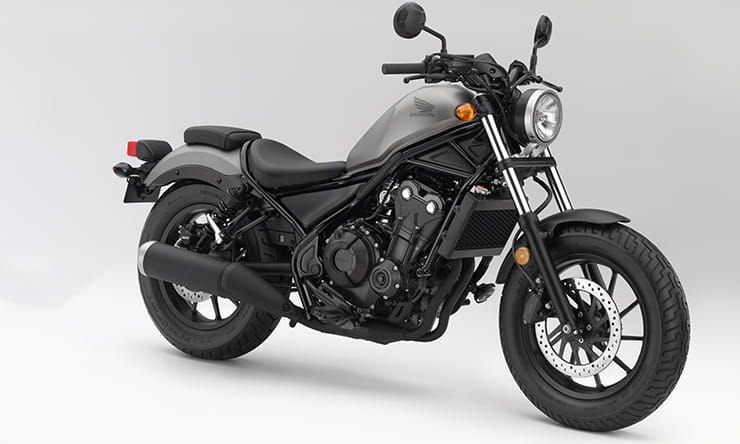 Is it a cruiser or is it a bobber? In truth, it’s a bit of both but as Honda themselves call their new A2-licence complying twin a ‘bobber’, plus the fact that it’s o good, meant we had to include it here. It’s the latest (fourth) addition to Honda’s purpose-designed, 471cc, A2-licence compliant parallel twins (joining the CB500F roadster, CBR500R sportster and CB500X adventure-styled bike). Like those it’s based on the same, Thai-built, smoothly versatile parallel twin but this time reworked slightly for extra torque and in a new frame with an even lower (690mm) seat height, which explains why it was the last to join the party. It’s an absolute doddle to ride, surprisingly good fun and ripe for customizing – which is probably just as well as, being a Honda and with the least convincing ‘Bobber’ styling of this group, it probably needs it. 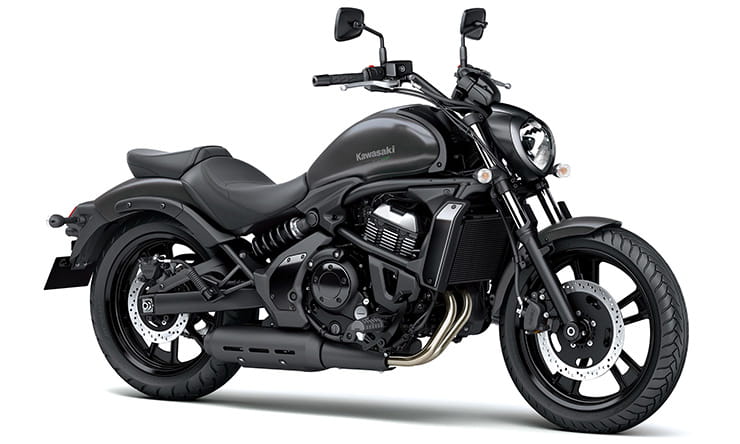 Again, arguably more cruiser than bobber, but Kawasaki now offer so many variants of its mid-range Vulcan with this one being decidedly ‘blacked out’ and minimalist, it’s worth including here. Kawasaki’s offering is derived from ER6n parallel twin running gear but, like the Honda, a detuned engine and new, low slung, twin shock frame to give an ultra-low seat height (705mm). Peak power is 61bhp, so it’s not A2 compliant (although a restricted version is available), it, too, is as easy as to ride and overall it’s unintimidating, effective transport. On the downside, the badge and ‘jellymould’ styling hasn’t the same cachet as, say, a Harley or Triumph and there’s only limited customising options. But if you want an accessible, affordable, introduction to the breed, it’s a great option. 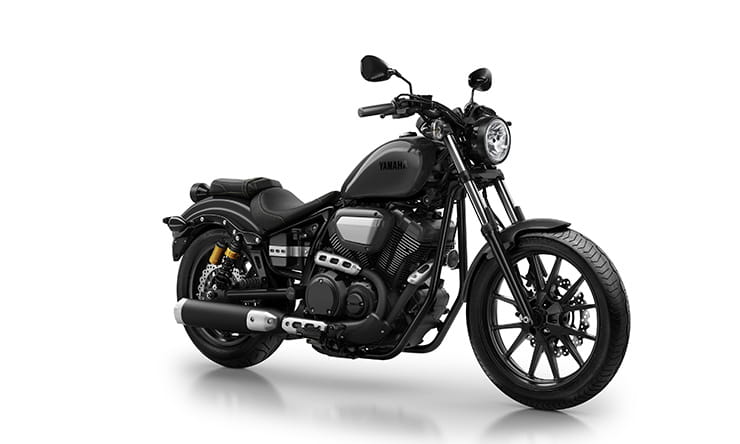 Now we’re starting to get more serious. Yamaha’s all-new, air-cooled, SOHC, V-twin XV950 was introduced in 2013 as a purpose-built, American-styled true bobber rival to the Harley Sportster. On paper it ticks all the boxes – 51bhp V-twin, ‘peanut’ 12-litre fuel tank, bobber styling etc plus easy manners and tons of character – which is more than can be said for most of the Japanese attempts. More substantial, serious (and pricey) than the Honda or Kawasaki it’s also become the basis for a number of spin-offs including the XV950R Racer and oddball SCR950 custom/trailie hybrid. If you want a credible bobber experience with Japanese mechanicals and aren’t too bothered by the name on the tank, it’s a good choice. 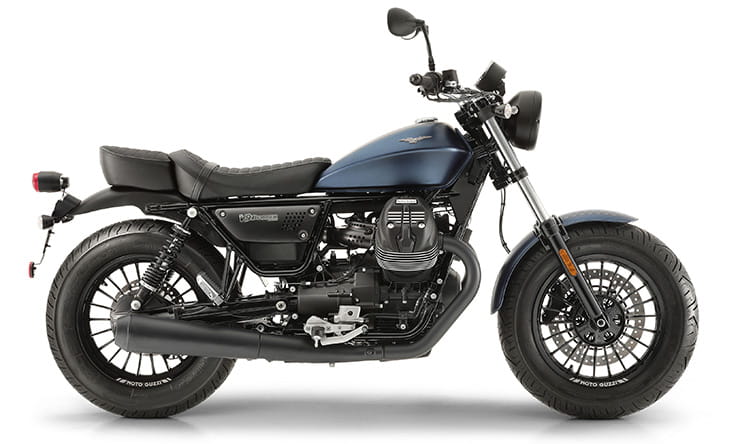 Italian legends Moto Guzzi have traditionally taken US-style cruisers more seriously than most ever since a V7 variant became the adopted by the California Highway Patrol in the early ‘70s, so in turn spawning the first California. Its new V9 family, introduced in 2016 as the Roamer/Bobber and intended as a new Cruiser and Bobber (obviously) replacing the old 750 Nevada but developed from that bike’s ‘small block’ 750cc transverse V-twin powertrain, was, therefore, eagerly anticipated. Unfortunately they haven’t quite proved the success – yet – hoped for. Although the larger 850cc twin is effective and charismatic and the handling OK, the spec is fairly basic and the styling doesn’t convince. Of the two, the bobber – minimalist style, blacked out and fat balloon tyres all present and correct – is probably the best option and is an OK bike, improved slightly in 2017 with a revised seat and riding position, but you’d have to be a big Guzzi fan to hand over your money… 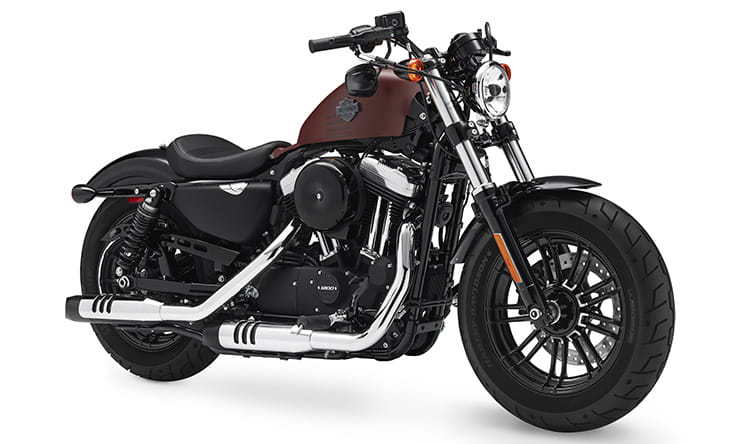 US giant H-D dominate this end of the market so much that, in truth, any number of its models could claim a place in this Top 10. But sticking rigidly to the Bobber definition, of its Sportster variants, it’s the fat-tyred, minimalist 48 that meets the brief best. So named for it small ‘peanut’ tank that was introduced in 1948, and based on the satisfyingly bigger 1203cc version of Harley’s smaller V-twin, the 48, simply, is the definitive bike of this breed, performs more than adequately (if a little crudely, although that is some of the charm), and brings with it the most kudos – and isn’t that a large part of the appeal? With ‘just’ 60 bhp, lots of weight and a fairly basic spec, we can’t argue that’s it’s the best of this bobber breed – Triumph’s new Bobber, for example, far outperforms it – but for authenticity, custom potential, residual values and plain garage appeal, nothing else comes close (although we could also make a case for Harley’s 882 Iron, with bigger front wheel but a smaller price tag…) 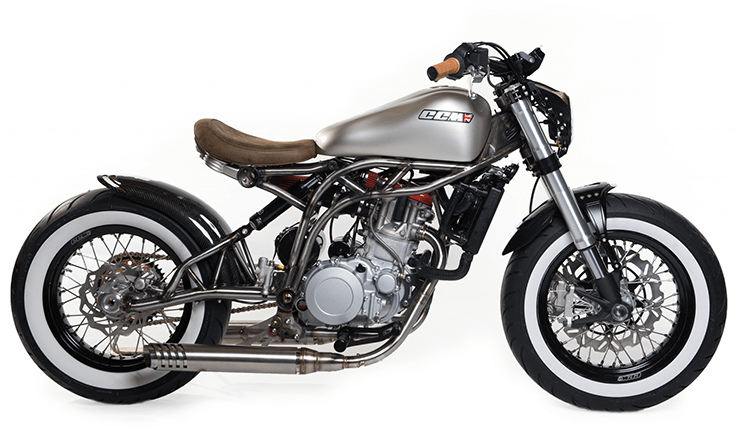 Here’s a bobber that came out of leftfield. British cottage manufacturer CCM was born in the ‘60s as an off-road specialist after Alan Clews (of Clews Competition Motorcycles) bought up parts and stock from BSA’s off-road racing department which was being closed down. It’s fair to say CCM been on a fairly roller-coaster ride ever since, mostly with off-roaders, but latterly with more road-going singles. Based around a larger, 600cc version of the 450cc single which powered the now defunct BMW G450X enduro, it has a simple, hand-made frame, lots of sweet detailing (brown leather grips for example) and has somehow managed to hit the current retro/café racer trend bang-on. A number of variants are now offered, including Scrambler, Tracker, Racer and now this Bobber version and all are punchy, light, stylish and good fun. Wouldn’t want to ride one down the M4, though… 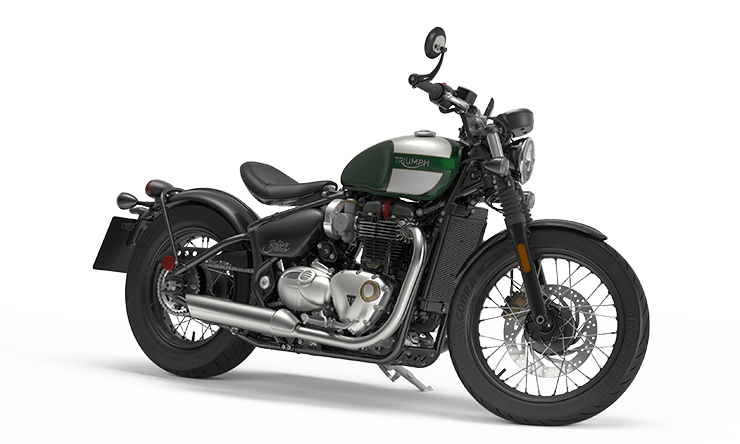 Arguably one of the most impressive Triumph’s of all of recent years and almost certainly the most adept, dynamically, and yet authentically styled bobbers of all. It was introduced in 2016 born out of the Hinckley marque’s all-new 900cc/1200cc Bonneville retro roadster family and uses the larger engine detuned for more torque in its own, hidden shock (for the hardtail look), low slung chassis. Being a Triumph it handles and stops far better than its looks suggest; that 76bhp engine is a peach and the whole look and detailing, exquisite. Add on top of that two riding modes, LED lights, a neat, single clock, adjustable riding position and more and it’s probably no wonder its been one of Triumph’s biggest sales success stories of recent years. A great bike. 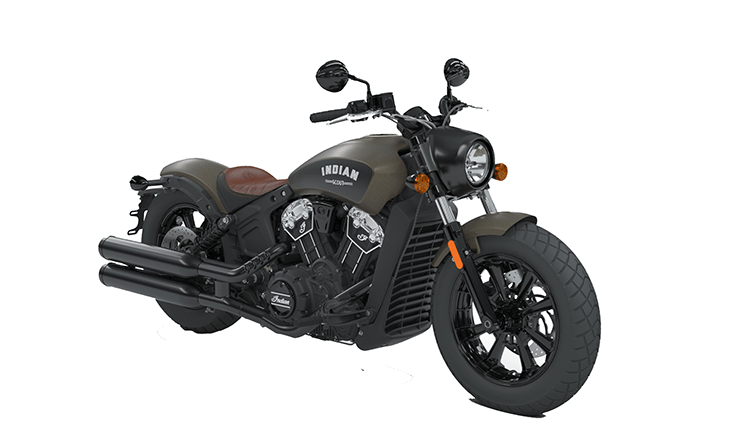 Upstart US Harley rivals Indian, which was relaunched as a brand by the huge Polaris concern in 2014, first with its ‘big-bore’ Chief and Chieftain models, has been one of world motorcycling’s biggest successes of recent years. But although its big bikes impress, it’s its smaller, 1200cc, Sportster-rivalling Scout family, launched soon after which have impressed even more. With a punchy, 100bhp V-twin, decent chassis and style all their own the Scout is midway between a Sportster and a Ducati Monster and the latest Bobber variant, introduced last year, gives it another string to its bow. With lowered suspension, revised ergonomics and a more blacked out it’s a fairly subtle interpretation but is still a capable, credible performer and one that stands out from the crowd. 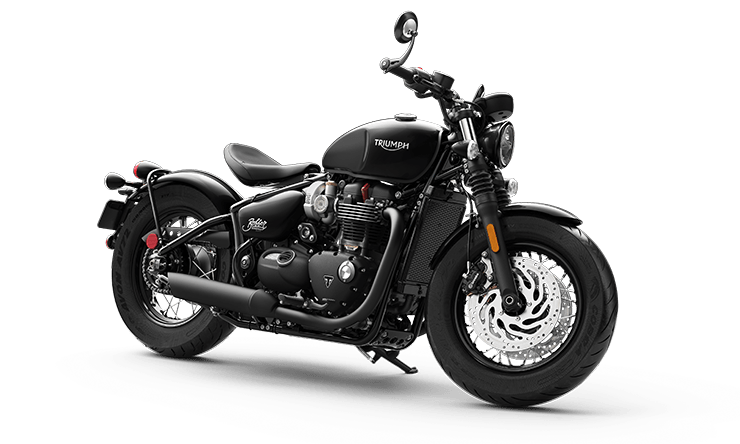 Just when we thought Triumph had the whole Bobber thing nailed with its Bonneville Bobber, a year after that bike’s launch, the Hinckley firm brought out the Bobber Black which is arguably even better still and so more than deserving of its own place here. With a smaller, 16-inch front wheel with fat Avon tyre, uprated brakes (twin Brembo discs) and forks and a more ‘blacked out’ look, the black not only looks even more like a traditional bobber – it goes better, too. Like before there’s plenty of neat touches, a spec that includes LED lights and the engine is unchanged and just as good as ever. If you like the look and can stomach the steeper price, the Black is probably currently the best all-round bobber of all. 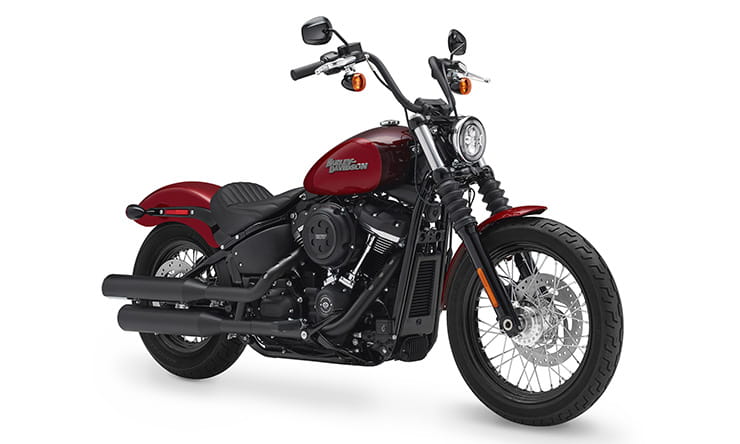 The original production bobber and still, for many, the best. H-D introduced its first Street Bob, then based on the old, twin shock Dyna chassis, way back in 2006, way before ‘Bobbers’ became a mainstream fashion motorcycle. Update repeatedly since, most recently and significantly into new (hidden shock) Softail form along with the new ‘Milwaukee Eight’ big twin motors and a host of detail changes, it’s no better than it ever was. And that, essentially, is pure, uncluttered, blacked-out and ‘bobbed’ Harley big twin. As such it’s an entry-level big Harley, a blank canvas for customizing (as bobbers always were), simple and straightforward. It even rides decently and evocatively (thanks to the new chassis/engine) as well. Oh, and those ‘mini ape hanger bars are nowhere near as extreme as they look…

For many it's the definitive, purest, ‘only’ factory bobber around – even if the Triumph actually rides better…