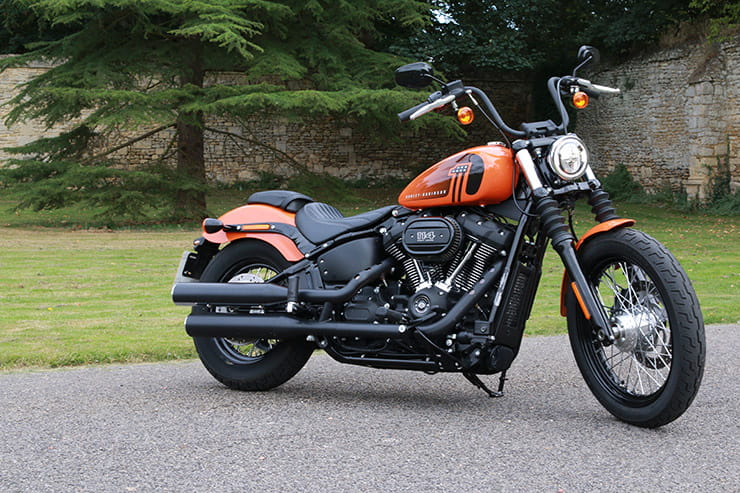 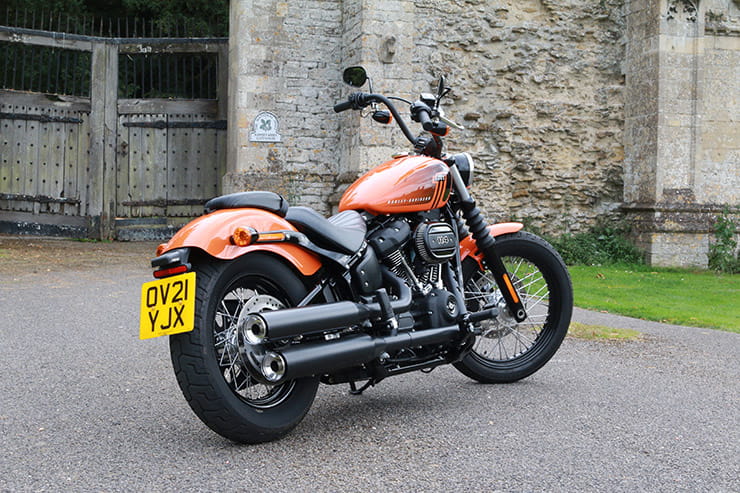 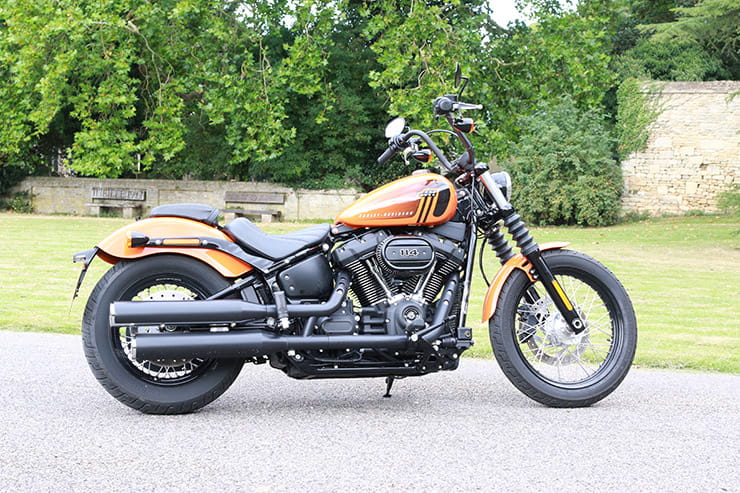 I first rode the Harley-Davidson Street Bob in early 2020 B.C (Before Covid) and, fitted with the 107 Milwaukee eight motor and dressed in heritage maroon paintwork, it was the ideal bike for relaxed cruises along the boulevard.

During lockdown though, while the majority of us were stuck in front of the TV piling on the pounds, the Street Bob was going to the gym – a lot.

Gone is the 'puny' 107 engine, replaced by the full-fat 114. Gone are the shy and retiring heritage colour schemes, replaced by bright, bold colours and garish modern graphics. But can this tiger change its stripes, or is it just the same bike underneath? We spent a couple of weeks with the 2021 Street Bob to find out. 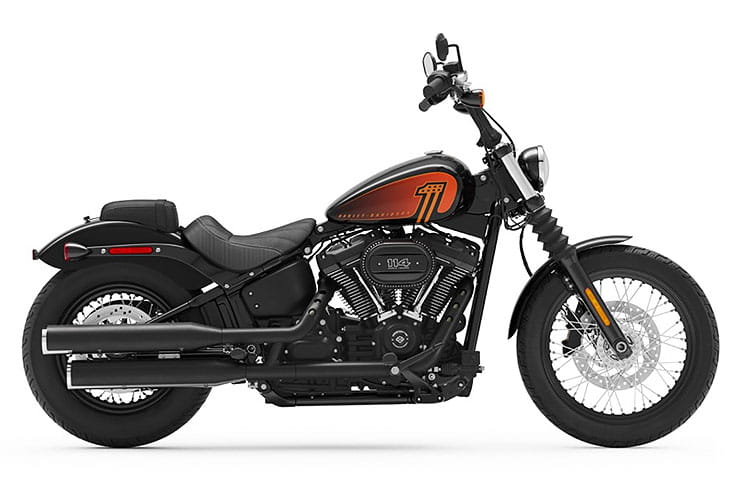 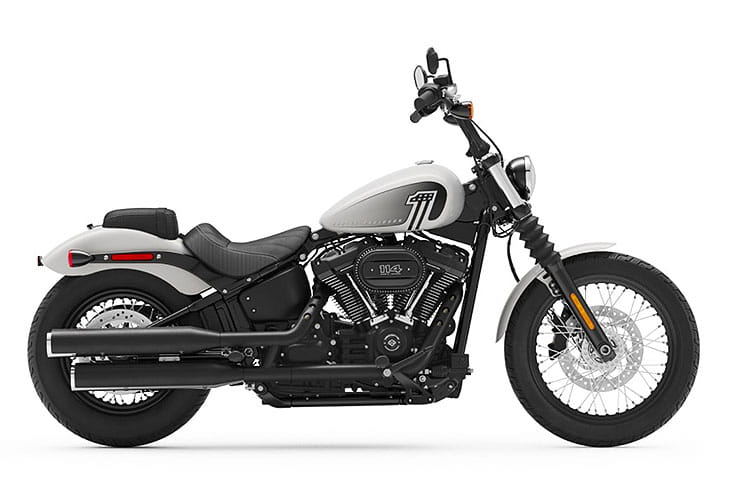 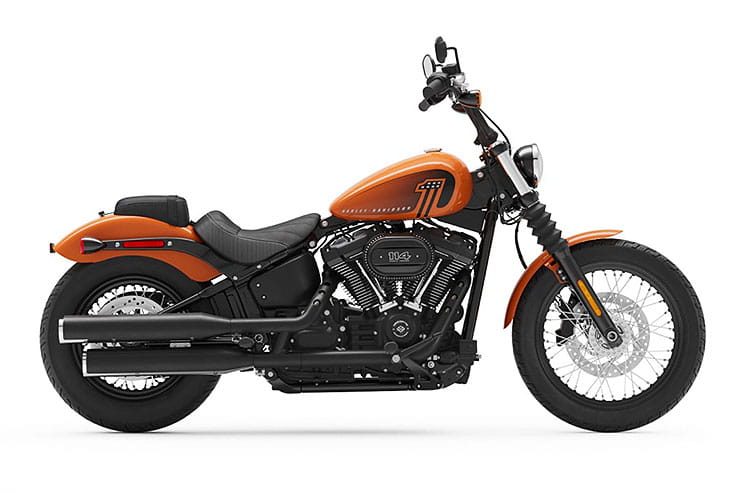 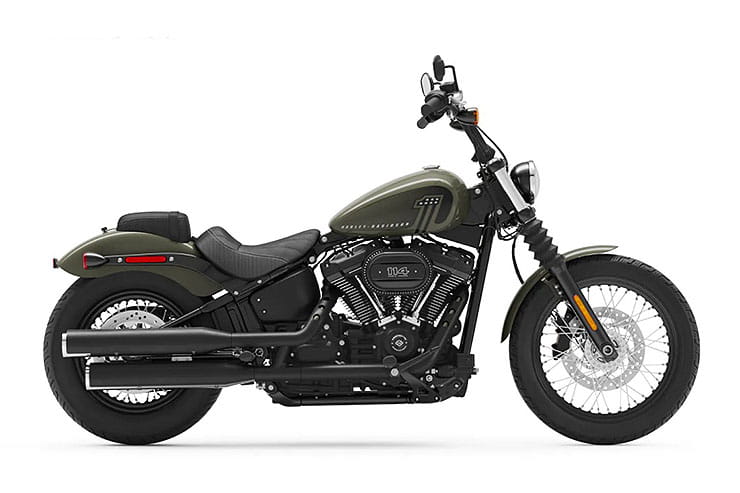 For that price, you'll be limited to the Vivid Black colour scheme. If you fancy something a bit more upbeat, it'll be another £350 for one of the other three schemes – Stone Washed White Pearl, Deadwood Green, or as per our test bike, Baja Orange.

If that seems a hard pill to swallow, then there are plenty of financing schemes available from HD with a typical example needing £2,000 up front as a deposit, 36 monthly payments of £172 and a final optional payment of £8,750. With used prices as strong as they are (we've seen two-year-old, low mileage bikes for around £1200 off RRP), you should be able to recoup a large slice of your outlay if you chose to sell your bike on at the end of the term.

Those hours spent in the gym are certainly paying off with the 114 feeling much more athletic and eager. Not only does the bike feel faster, but it changes your attitude as the rider. Where the Street Bob 107 was a bit more relaxed and made you cruise rather than blast, the 114 eggs you on, showing off with its seemingly limitless torque. Quiet B-road bimbles soon turn into peg-scraping back road blasts, hunting down slower moving traffic to feel the thrill of the overtake, and launching from corner to corner. It's entertaining and addictive in equal measure and something quite unexpected from such a big bike.

While its clear that the stronger, buffer Street Bob has the guns to fill its new suits, it would have been nice if some of that time in the gym could have been spent on cardio as the 114 quotes the same peak power as the 107 at 85.8bhp (64kW) at the same 5,020rpm. It's unreasonable to expect a super-high revving engine of such capacity, but its an interesting side note that the 114 engine when fitted in the Fat Bob makes and extra 7bhp at the same revs, so clearly HD are holding back on the Street Bob for some reason. 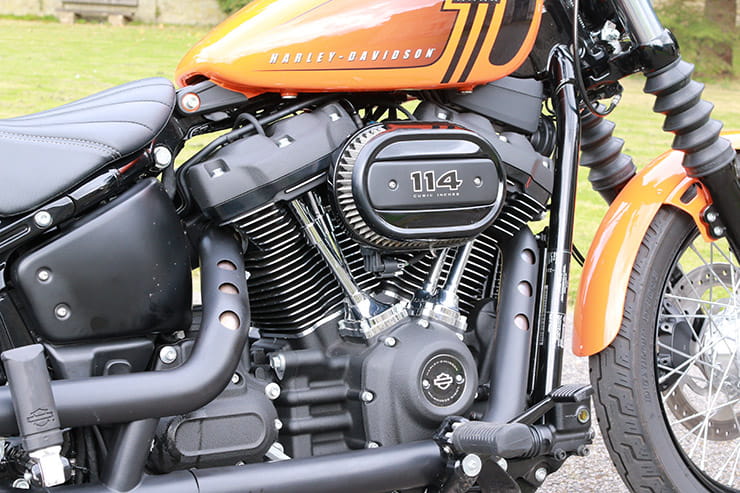 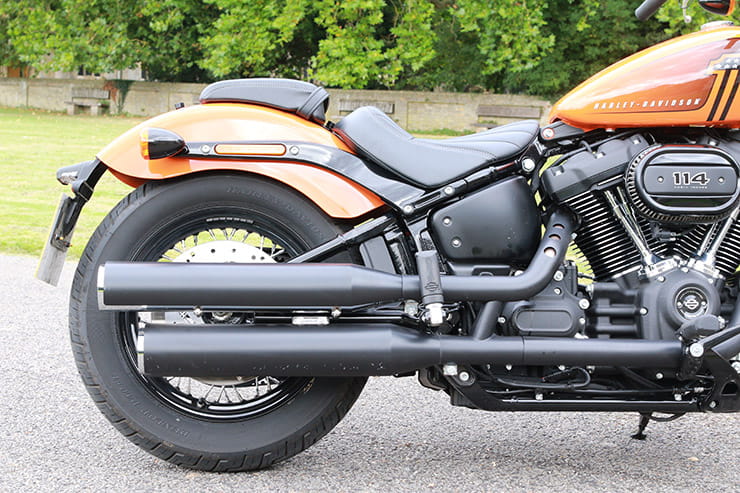 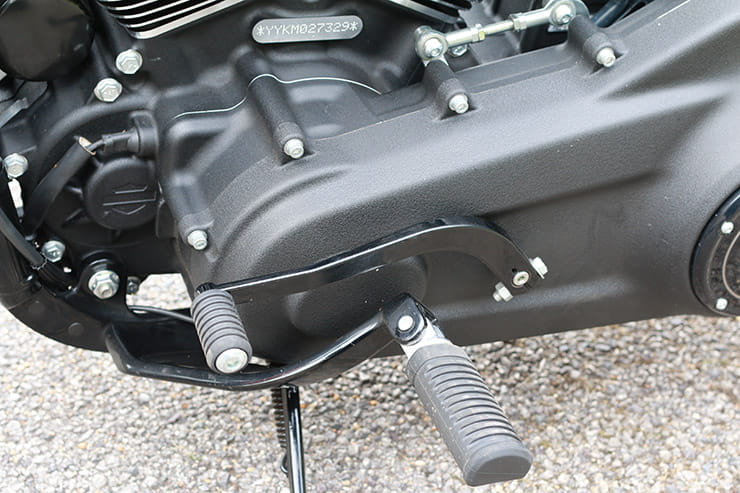 Once the preserve of the really big bikes such as the Fat Boy, the 114 Milwaukee-Eight engine feels right at home in the smaller bikes of the Softail range, despite the slightly lower max power output than in fat-boy-guise, giving them the pep and fizz that has been lacking in models such as the Street Bob.

My only gripe with the bigger engined Street Bob in comparison to the 107 ridden last year, is the heavy clutch. On a 105-ish mile test route that I take all test bikes on, this was especially evident making city riding a bit more of a challenge than it really should have been. Thankfully, the massive torque of the engine meant that I could leave the Street Bob in second or even third gear and use the sheer grunt of the 114 to keep me moving, even in walking pace traffic.

Away from the stop-start traffic on Cambridge city centre though, the combination of engine and gruff-but-not-offensive exhausts make for a winning combination. While many owners will, no doubt, fit their Hog with super-loud, slash cut open pipes, for me the polite yet purposeful growl of the standard pipes can’t be bettered. 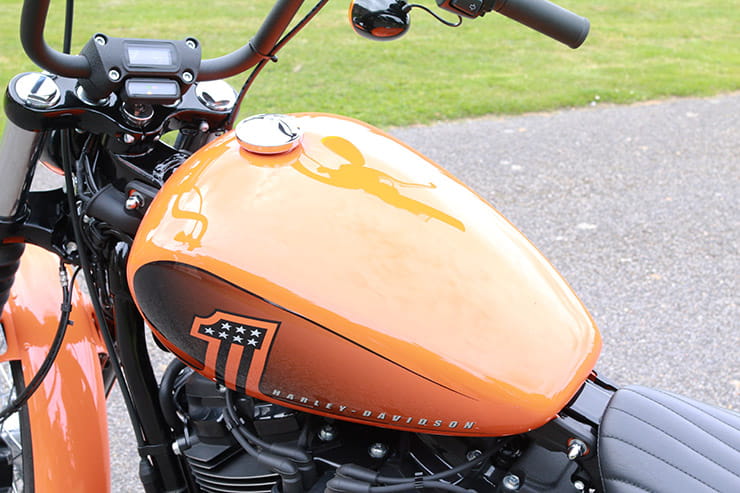 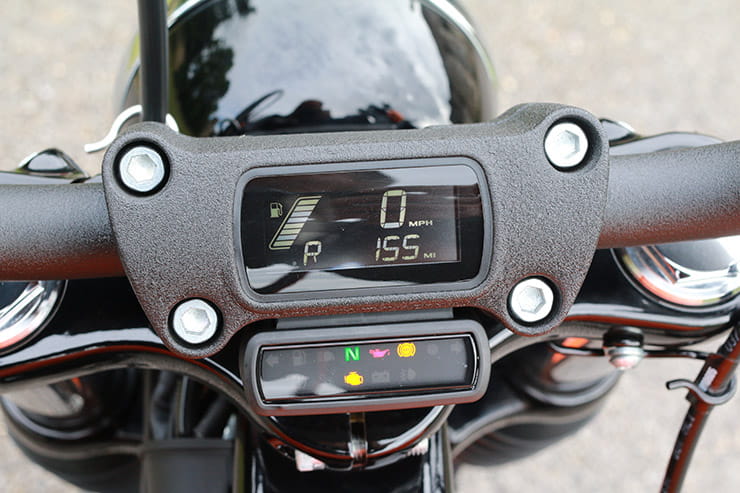 Fuel economy on a bike that weights in at nearly 300 kilos, with a 1800cc engine is never going to be class leading, especially when the engine both encourages and rewards lunatic behaviour, and that’s certainly the case with the Street Bob 114.

Harley-Davidson quote a figure of 43mpg under EU 134/2014 testing methods (read more here if you are suffering from insomnia), while in real world testing, I'd hit reserve on the 13.2 litre tank in 122 miles, despite the onboard computer giving me an estimated range of over 150 miles. Once brimmed with just over 12 litres, that gave a real-world mpg of a little over 46mpg. Better than the official figure, but still meaning that long trips will be broken up with frequent stops at the filling station. While your wallet won't thank you, your backside might – see comfort, below.

'All things are relative' they say, and that’s certainly true when I describe the handling of the Harley-Davidson Street Bob 114 as good. Of course, its never going to trouble your mates on their head-down-arse-up sports bikes, but even in 107 form, the Street Bob has always been a sweet handling bike. Yes, you can scrape the pegs with ease if you choose to, but with slight tweaks to your riding style, you can also make surprisingly good progress while still enjoying yourself on the twisties and B-roads.

The weight of the bike is something you can never get away from and man handling the bike round the garage, or onto the driveway, it feels everyone of its 297Kg, but once on the move, the combination of low centre of gravity and low saddle height mean that even shorter riders like me (5' 6") can flat foot with ease, and fears around the weight soon dissipate.

That weight does show itself again on particularly bumpy roads though (i.e. most B-roads in Cambridgeshire) and the Street Bob struggles to keep everything under control, especially as the speeds increase. 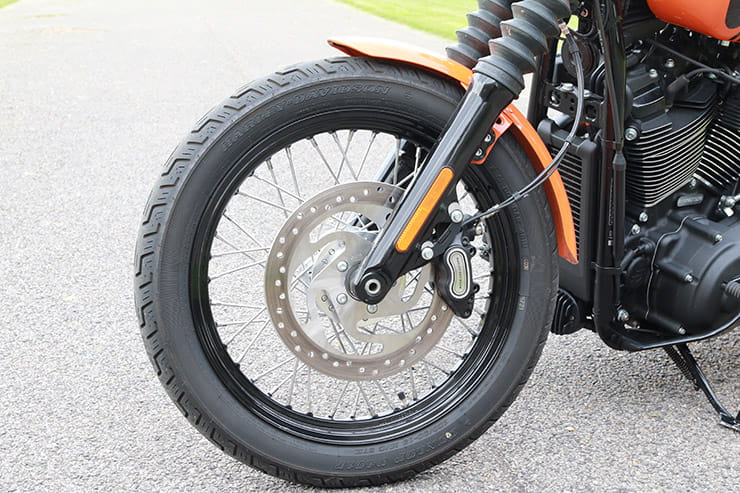 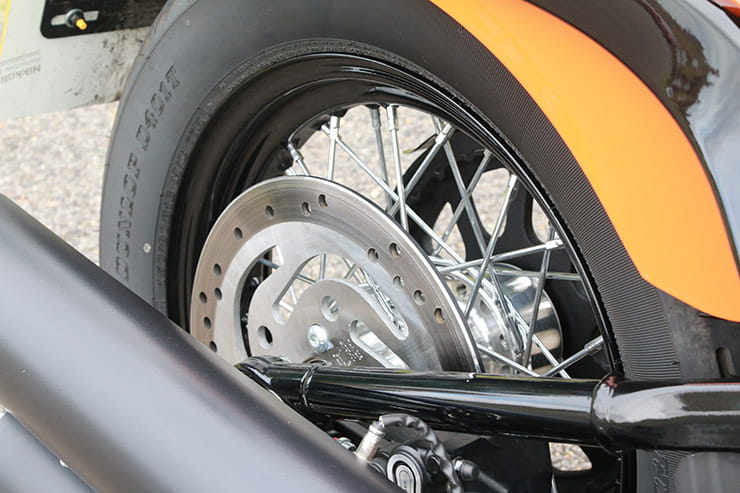 It never ceases to amaze me that the majority of the Softail range run a single disc at the front, and the 114 Street Bob is no exception.

On first glance, the 300mm disc and four-pot caliper combination looks woefully inadequate to stop a near 300-kilo bike at full chat, but you soon realise that HD have done their homework and the combination of engine braking and front brake and all that needed to haul the bike down from motorway speeds with ease. It’s a good job too, as the rear brake seems to have been added for aesthetic symmetry rather to the help with the slowing process. It works to smooth out your ride when riding at low speeds but is soon overcome when used in anger or at any decent speeds, squawking and pulsing as the ABS actuates to try and prevent rear end locks.

Having said all that, at no point did the Street Bob feel out of control - as with the handling you soon amend your riding style to compensate, rolling off a bit earlier than normal and enjoying the overrun from the twin shotgun exhausts. 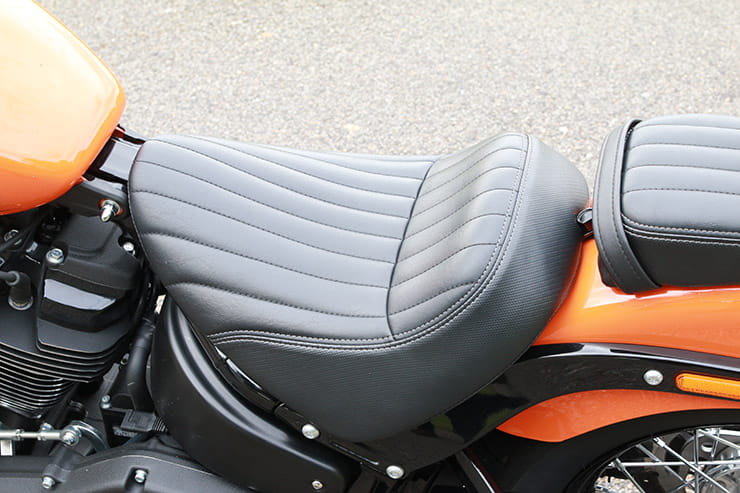 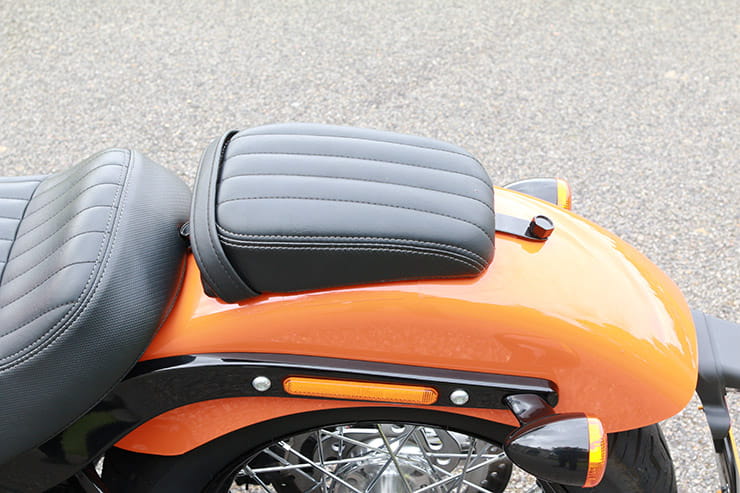 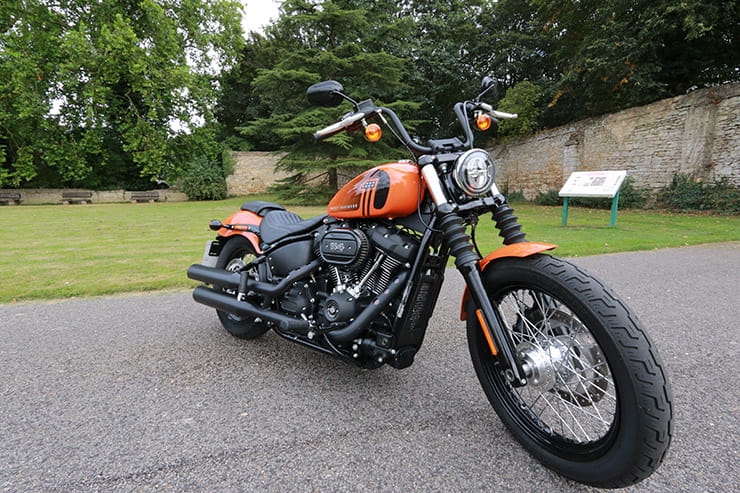 Knowing that Harley-Davidson have a whole seperate range of bikes under a 'Touring' banner, my expectations of the Street Bob being a long-distance hauler were already set quite low, but the bike did a pretty good job of taking me as far as the 120ish mile fuel tank range would allow. By this point though, after a good 3 hours in the saddle, my backside could take no more. The combination of mid position foot controls and upright near-ape-hanger bars means that all your weight is transferred downwards to your tailbone. The seat does a great job of minimising the discomfort at first, but soon the lack of fidget space means that you will be making excuses to pull over and stretch your legs. It's a little unfair to criticize the Street Bob for its lack of touring ability though as its clearly not intended to haul you and your luggage across continents. It’s a stripped back bobber – giving you just the essentials, and what it lacks in creature comforts is makes up for in spades with its attitude, eagerness, and ease of ride. 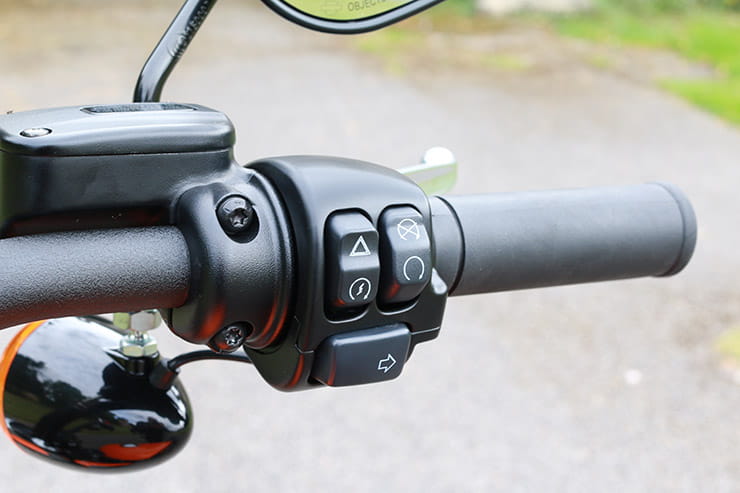 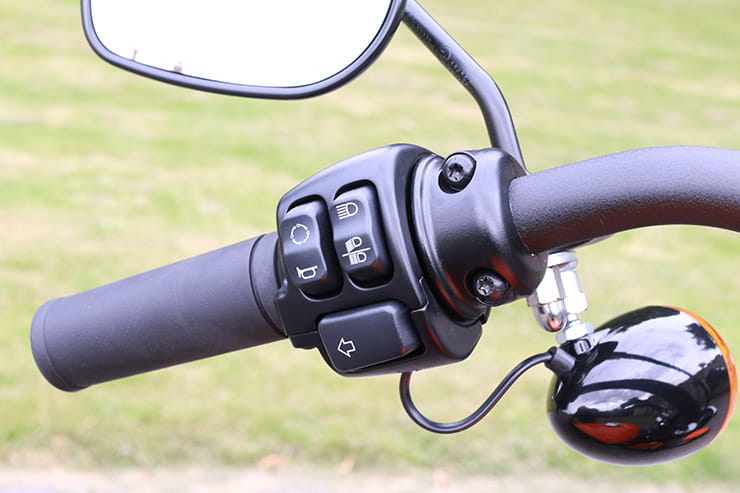 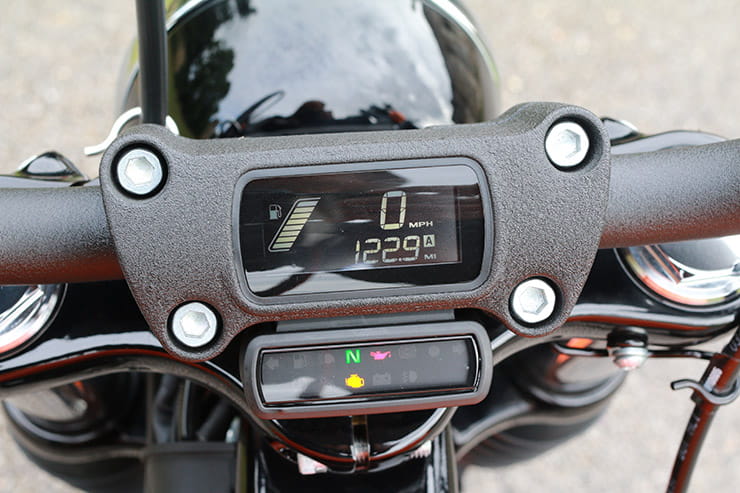 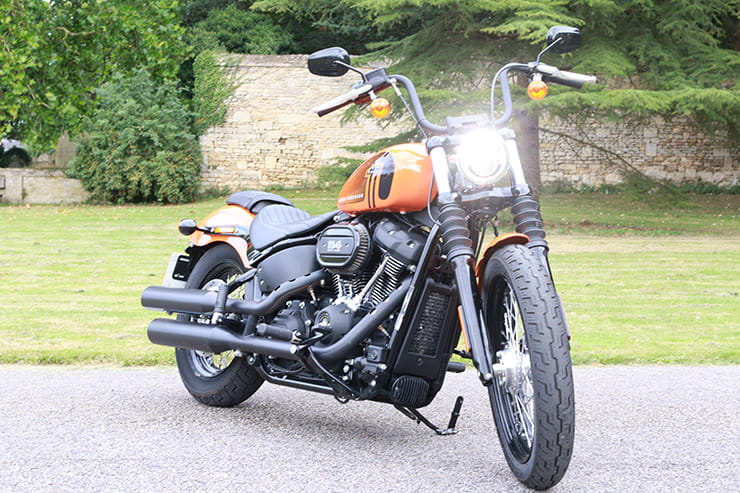 The stripped back nature of the Street Bob continues on the dash with Harley's now customary 2.14" (54mm) LCD display showing speed, rpm, gear selection, fuel level, range and trip, along with a smattering of lights, all controlled by a button on the left bar. It's far from high-tech when viewed alongside the ever-growing trend of massive TFT screens, but very in keeping with the style of the bike, and easy to read in a range of light conditions.

Indicators are self-cancelling and work well the majority of times. Changing lanes on dual-carriage ways, or smooth curves onto or off of roundabouts tend to confuse the system but otherwise they work well. The bike is also fitted with Harley-Davidsons excellent LED headlight (the 'Daymaker' (to be said in a deep dramatic voice)) and while LEDs are far more common now than maybe five years ago, it does add a modern touch to the bike while keeping a traditional round headlight style. Keyless ignition is also standard on the Street Bob and its a feature that I welcome on any bike. Having spent too many wasted time donning gloves only to find the key is still deep in my pocket, its certainly something that makes sense to me.

When it comes to accessories, as you can image, the sky is the limit with a whole range of HD authorised parts (which will not affect your warranty) alongside parts from the likes of Screamin' Eagle, Vance & Hines, S&S, Supertrapp, Bassani and many, many more. 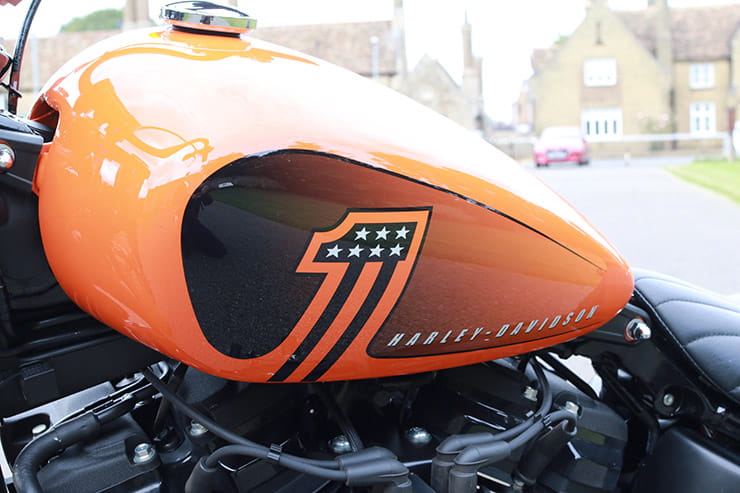 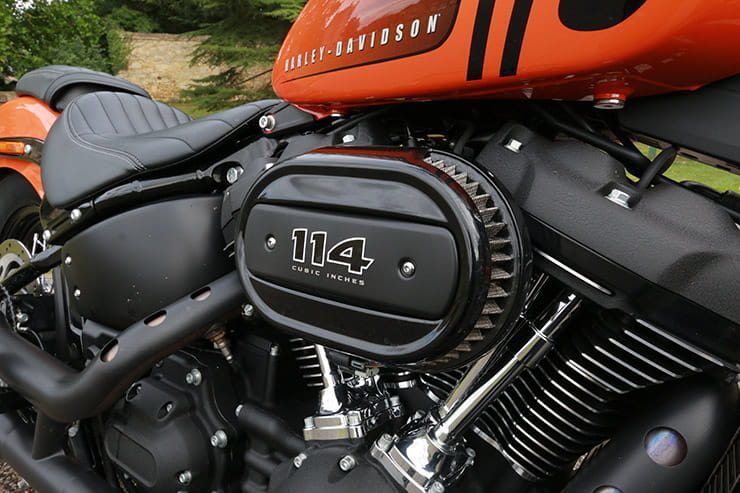 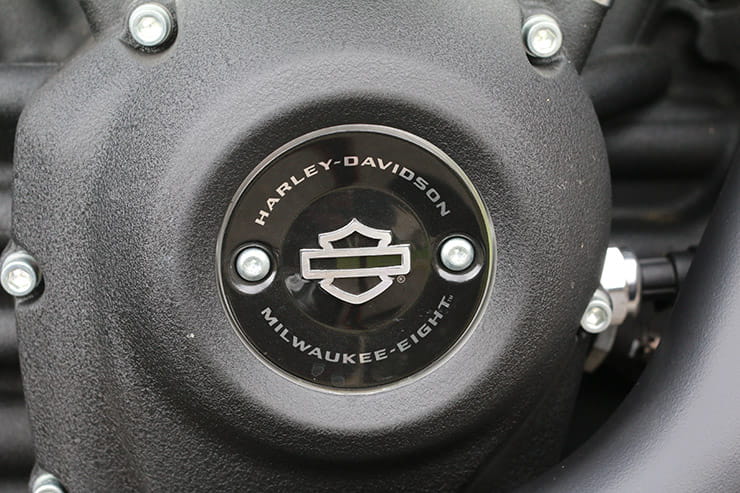 Those hours in the gym have paid big dividends for the Street Bob 114 transforming the power delivery and the riding experience of the bike. Coupled with the brighter colour schemes, the new model feels better than the outgoing 107 is so many ways, such is the psychological effect of the bigger engine. It's still a lot of hard-earned to shell out on a stripped down bike, but to me, the smile it put on my face when riding it made it worth it. Only you can decide if it’s the bike for you, but I would thoroughly recommend you book a test ride as soon as you can and feel the power for yourself. 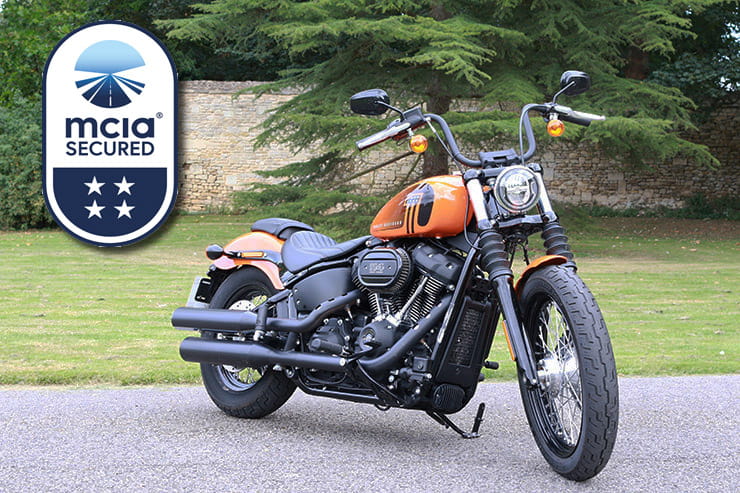