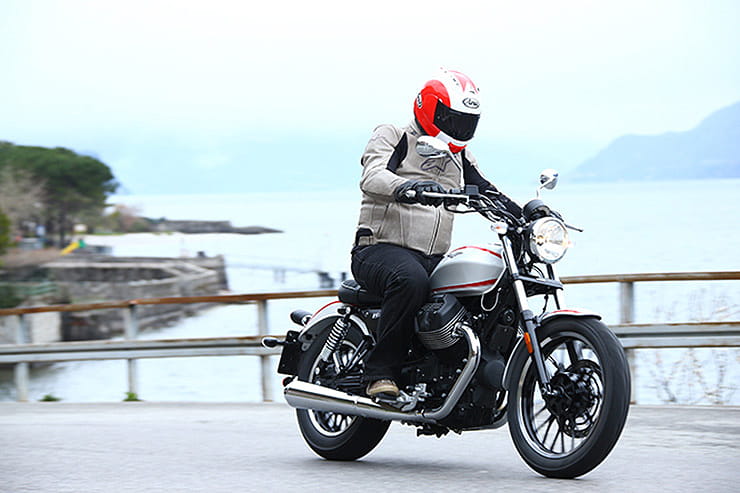 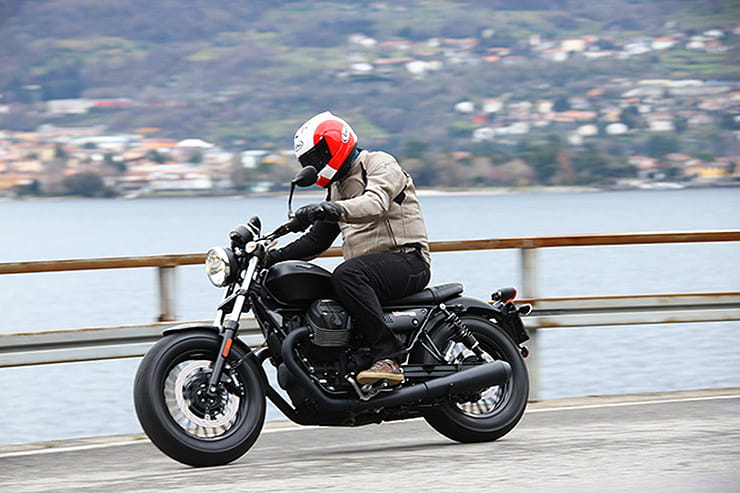 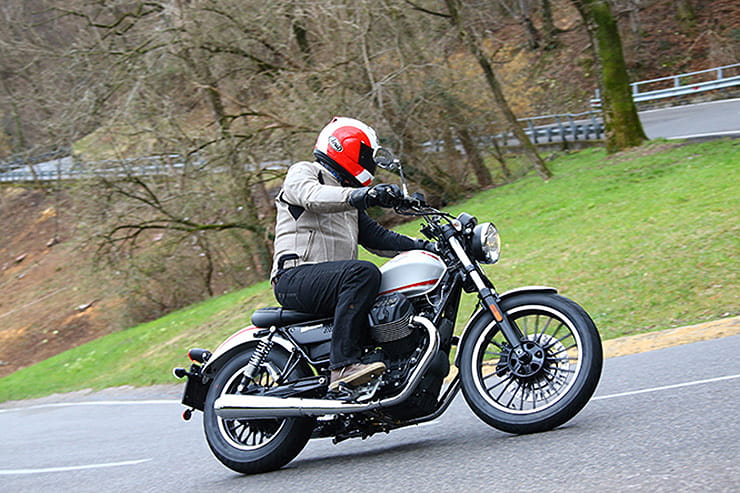 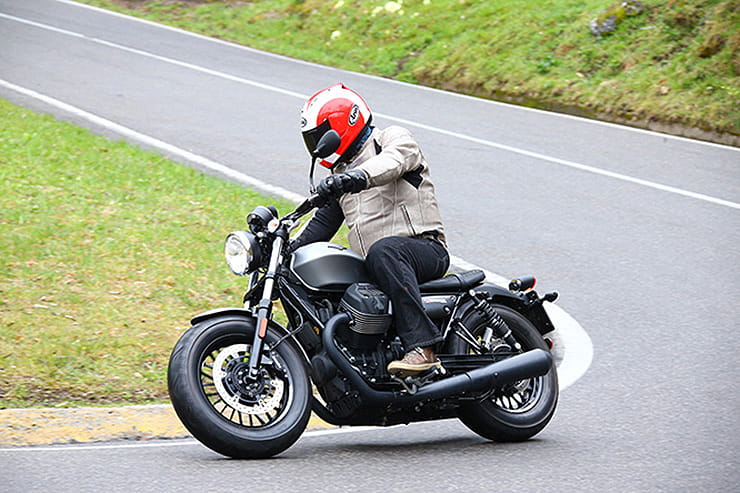 Given the enduring success of Moto Guzzi’s V7 744cc retro roadsters, a bigger V9 version (or even two) was a long time coming.

The new-for-2016 V9s (and there’s two of them) were the result – albeit with a slight caveat. While the V7s are classic roadsters or even cafe racers, complete with an upright gait and 17-inch wheels front and rear, the two V9s, the Bobber and Roamer, are taking a slightly more laid back approach with a distinctly more cruiser flavour.

So, while the more traditional V9 Roamer (the white or red bike in the pictures) is described by Guzzi as a ‘universal cruiser’ slathered with chrome and laid-back attitude, its stablemate, the V9 Bobber, as the name suggests, is designed to be a more hard-core, hot rod, US-style ‘Bobber’, or ‘compact muscle bike’, as Guzzi prefer to call it, cloaked in matt black and pared-down cool and with a fat balloon front tyre.

Both are easy to ride, have plenty of character and more than enough performance for their target audience. But they’re not the ‘bigger V7’ some hoped for, their performance and handling are adequate rather than inspiring and nor are they without fault: the rear suspension is choppy verging on harsh; low down delivery is a little lurchy and both, like most Guzzis, still feel like something from a different age.

When launched the Roamer was £7899 with the Bobber £100 more. Today only the Bobber survives new and is £1000 more again or about the same as a Harley 883 Iron, which is its closest natural competitor. There’s not much between the two, to be honest, but considering the allure of the H-D badge you’d have to be a devoted Guzz-ista to go for the Italian. Used prices are much more tempting, however. The V9s haven’t really caught on, deflating used values so, although rare, a decent, low mileage Roamer can be had for £5500 with a Bobber barely more, with most comparable Harley’s at least a grand more. 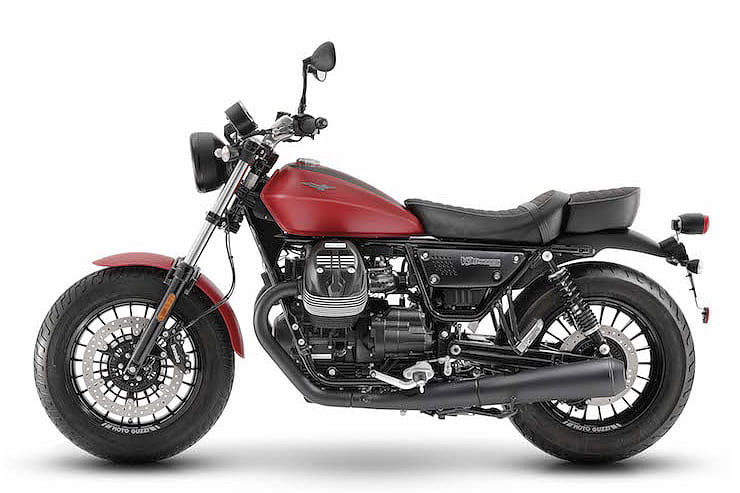 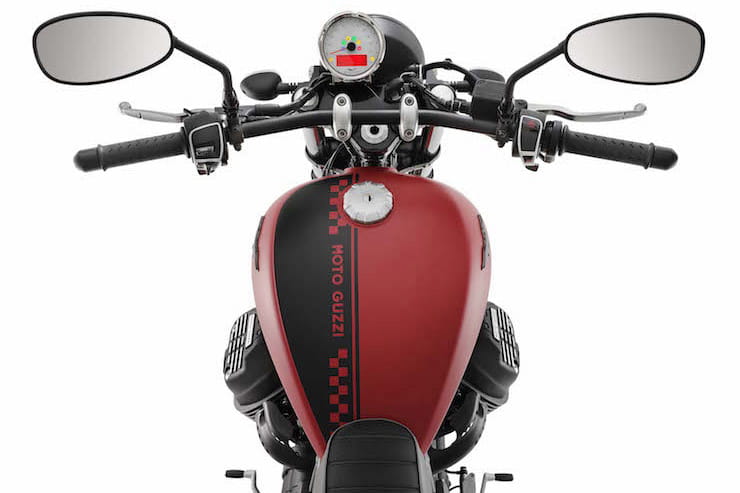 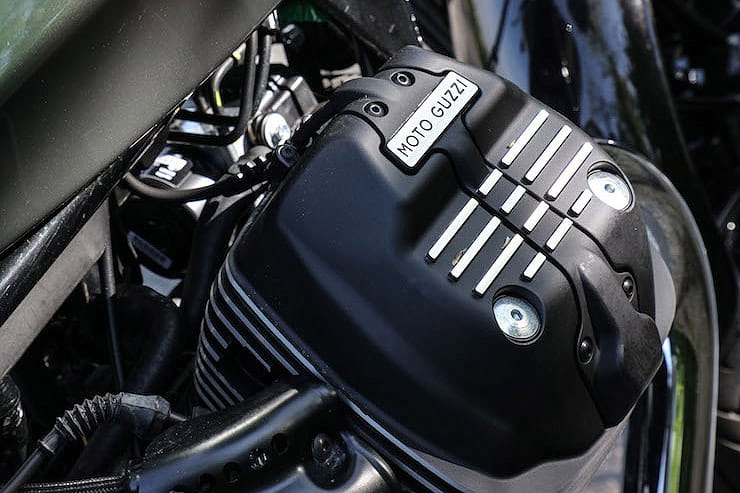 The ‘small block’ Guzzi transverse V-twin has been heavily reworked and enlarged over that of the V7. The result is a peak power of 55bhp @ 6250rpm, which is 7bhp up on the V7 and, perhaps more impressively, peak torque of 46lb.ft at just 3000rpm (compared to the V7’s 40.3lb.ft @ 5000rpm), which is not just more grunty, but significantly lower in the range – just as it should be for a cruiser. Overall, performance is adequate rather than inspiring. The extra low-down oomph means, simply, it can pull a higher gear than you’d expect which in turn makes everything smoother, easier and more cruiser ‘rumbly’.

The Guzzi V-twin was virtually completely re-designed with two objectives: first, Euro4 compatibility in terms of noise and emissions and, second maximization, not of power, but of torque, with the specific aim being for 95% of the new unit’s grunt being available below 3000rpm.

To achieve that, the V7-derived motor has had its biggest makeover in recent memory. At the bottom end, the crankcases have been extensively modified with new oil ways to improve cooling and reduce power losses while there’s a new wet sump and generator cover, too.

The top end, meanwhile is all-new. Although still an air-cooled, twin pushrod, two-valver, displacement is increased to 853cc (from the V7’s 744cc) via both larger bore and stroke (to 84 x 77mm from the V7’s 80 x 74mm). While Guzzi has also added what it calls an ‘auxiliary air system’ (which basically feeds cooling air through two new channels) plus fitted a new, three-way catalytic converter in the stainless two-into-two exhaust to help achieve Euro4. Induction, meanwhile, is by a single throttle body (chosen for slimness between the knees, crucial on a Guzzi) Magnetti Marelli fuel injection system.

Nor do the revisions end there: the transmission gets a larger diameter (160-170mm) single plate clutch to help cope with the added torque while the six-speed gearbox gets an extensive makeover with a new primary drive which alters the overall ratio plus taller first and sixth and cogs, the latter now intended as a kind of cruising ‘overdrive’. Even the cylinder fins are revised to be more rounded while the shaft-drive housing is new, too, to accommodate the wider 150 rear tyre. Reliability is generally excellent, although examples of bikes with high mileage are rare. 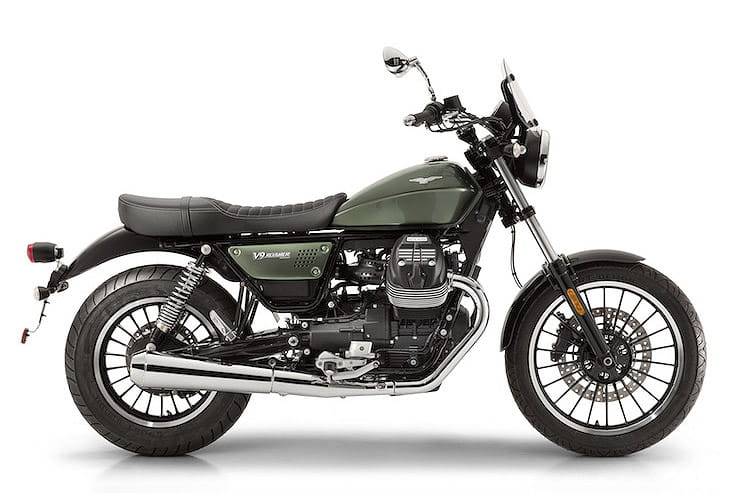 Although enlarged to 853cc, the V9’s powerplant is generally understressed, low revving, even in V7 form  was decently frugal and as a result should easily return 55mpg+. It’s cruiser nature means it’s unlikely you’ll want to ride it hard but if you should (and maybe this applies most to Bobber owners), 50mpg is still typical.

The V9’s chassis and running gear gets more changes than you might expect, too. Although the V7’s tubular steel, twin loop frame is essentially the same, that bike’s 17-inch roadster wheels have been swapped for new 19/16in (for the cruiser Roamer) and 16/16in (for the Bobber) combos. The smaller rear wheel combines with shorter (preload adjustable) Kayaba shocks to give a lower rear end. While at the front both bikes share non-adjustable, 40mm conventional forks.

The Roamer is an easy, unintimidating, novice-friendly machine very much in the V7 mould and yet one with a touch more cruiser posture and a tad more low-down punch. Its 19in front wheel makes the steering seem a little lighter and less planted and assured, but not markedly so. It’s an old school, fairly basic (but also sweetly detailed and temptingly affordable) roadster/cruiser hybrid, and not much more than that.

The Bobber, meanwhile, has far more ‘bad-assed’, hard-core attitude. Its more forward-canted riding position is sportier, more aggressive and the revised geometry means you feel a stronger, more assured connection to the front wheel, enough to have you throwing it more eagerly into turns. 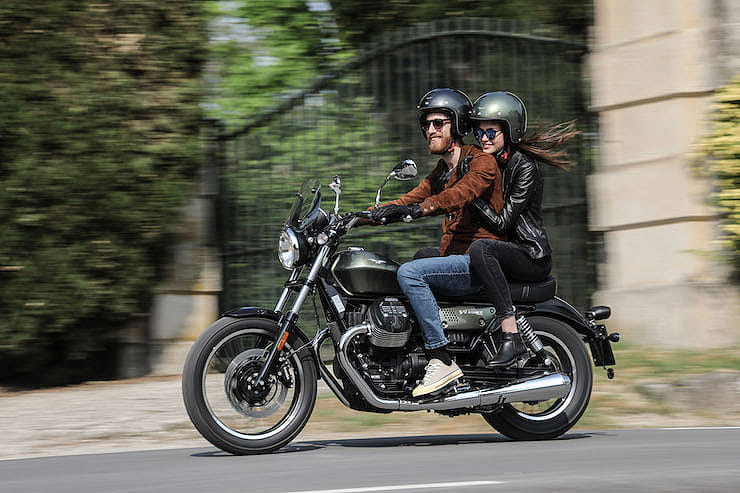 Both V9s, being non-performance-orientated cruisers, use a single front disc brake set-up, specifically a 320mm Brembo item gripped by the same firm’s four-piston caliper, with a smaller single disc and single piston caliper at the rear, aided by a dual channel ABS system from Continental which acts separately on the front and rear wheels. They’re effective and sufficient without particularly impressing.

The Roamer is the better bet here. More laid back, with a more relaxed riding position and thicker seat, meaning it’s fine over reasonable distance. With no fairing or screen, however, it’s no real touring bike. The Bobber, meanwhile, with Its thinner seat, exaggerates the V9’s already slightly harsh rear ride, compounding its emphasis on style rather than comfort. 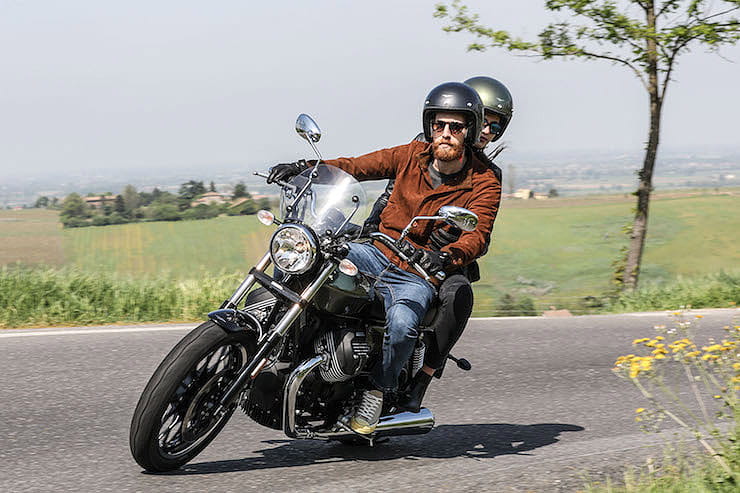 Neither the Roamer nor Bobber are world-beating. Instead, they’re good old fashioned, old school motorbikes, warts and all, complete with slightly daft names. The Roamer is the pleasant, be-chromed, traditional roadster/cruiser hybrid, and a worthy successor to Moto Guzzi’s late 750 Nevada. The Bobber is the fat-tyred, attitude-laden fashion junky that’s a true rival to Harley. Neither are the ‘bigger V7’ hoped for but they’re characterful, solid and decent value as a used buy – if you can find one.