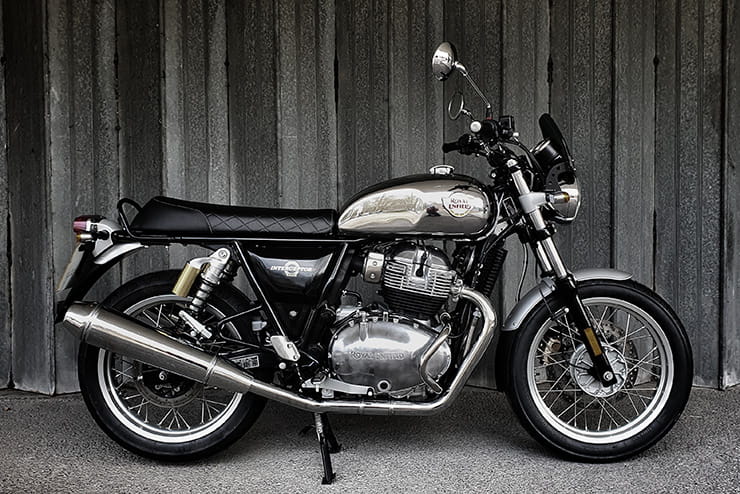 The Royal Enfield Interceptor 650 carries the first parallel twin motor with the iconic badge in more than 50 years, and starting at just £5,699, it promises to be one of the best value bikes on the market.

But is it reliable? It’s a question asked by many, and by running this bike over thousands of miles (right through winter and into 2021), I intend to find out.

For a little background, I’ve been riding since 1996, have owned 20 bikes so far, and have ridden 100s more having worked on MCN, Bike, Ride, MotorCycle Monthly and Motorcycle Sport and Leisure before joining Bennetts BikeSocial. I currently own a BMW S1000XR, a 1999 Kawasaki ZX-6R and a customised Honda MSX125 (Grom). Over the coming months I’ll be sharing my riding experiences of this motorcycle during commuting, weekend blasts, touring and trips out with a pillion. I’ll also be looking at the service schedules and talking to owners to really find out if this bike is worth the money…

This is a bike I can’t help but stare at. And I don’t mean in a ‘what were they thinking’ <cough>KawasakiZH2<cough> way; the Interceptor has such classically simple lines that I just have to have one more look as I walk away from it.

This is coming from a late-40s owner of wide range of machines; whether it appeals to you of course won’t be something I can influence. I hoped – by now – to be telling you what it was like after 1,000 miles but shortly after receiving the bike the country went into lockdown, so all I managed was a ride home and a blast out in the countryside the day before I had to hang up my keys.

The 648cc parallel-twin motor might ‘only’ make 47bhp (it’s A2 licence-friendly), and it does that relatively high in the revs at 7,250rpm. It also ‘only’ makes 38.4lb-ft of torque at 5,250rpm, but 80% of that torque is available at 2,500rpm. You don’t need to work this bike hard to potter through towns and villages, you don’t have to thrash it to enjoy a blast in the countryside, and yet it doesn’t feel stressed when it’s sitting at 80mph on the motorway.

I tend to be a rather uneconomical rider, but I saw 50.3mpg during my rides. There’s no economy gauge, so I checked the mileage from brim to brim of the tank. Interestingly, the LCD fuel gauge seems pretty pessimistic; at 85 miles there were two to three bars showing out of seven. By 93 miles the last bar was flashing, yet I only got nine litres of fuel in – if that tank does hold 13.7 litres (and you can use it all), I should have had just over a gallon left; enough for a good 50 miles. I’ll test it by running it dry later… 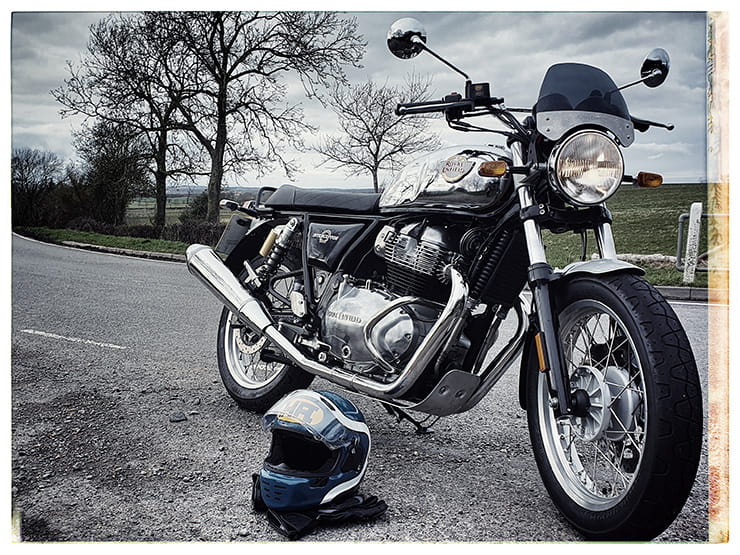 One 100 mile ride isn’t enough to give a thorough assessment of the Royal Enfield Interceptor 650, but it did get me very excited about a return to normality…

First impressions were that this thing is heavy. It might only be 213kg (and that’s accurate, judging by this video of it being weighed from a tractor), but it leans a long way on its side-stand and feels rather top-heavy.

Jumping on this after my ZX-6R I wasn’t thrilled at first, but it was only a matter of a few miles before I was wallowing in the relaxing ride, spotting beautiful parts of the countryside (yes, even in the Fens) that I’d never noticed, and pulling over for photos and another look at the polished metal and chrome that makes me think what it must have been like for my Dad riding his red Flying Flea back in the early 1950s.

Now, not being able to ride the bike, I figured I’d take it apart to have a closer look at the build-quality, and to get a better idea of how reliable I think it’s going to be. Certainly from owner feedback I’ve had so far, there are no major problems or issues with the Interceptor 650, besides a few mentions of head bearings and speedo cables being replaced under warranty. And this bike has consistently been among the top ten sellers in the UK for the past year or so; it’s popular.

Do YOU own a Royal Enfield Interceptor? If you're a Bennetts Rewards member, click this link to send me your details and I'll aim to feature you and your bike in an upcoming review. When lockdown is over, I'm also hoping to arrange a great ride out for many of us to get together. Tea and bacon butties will be on me. I'll keep the link open until 12th July 2020, but please do get in touch as soon as you can! https://rewards.bennetts.co.uk/rewards/tell-us-about-your-royal-enfield-interceptor

This Interceptor had already covered 2,541.7 miles when I took it on, likely as a demo bike at MotoGB in Chorley. You can watch the video below to see what I found, but here’s a summary:

Under the skin of the Royal Enfield Interceptor 650

Having been an ex-demo, this bike came with a few extras already fitted:

I’m going to be fitting a set of Hagon shocks, which cost £206.50 including delivery and being set up to suit the rider’s requirements. I’ll put some miles on the bike before I fit those.

I also intend to fit some luggage – I don’t want anything too modern, but the SW Motech Legend range looks like it could work a treat… 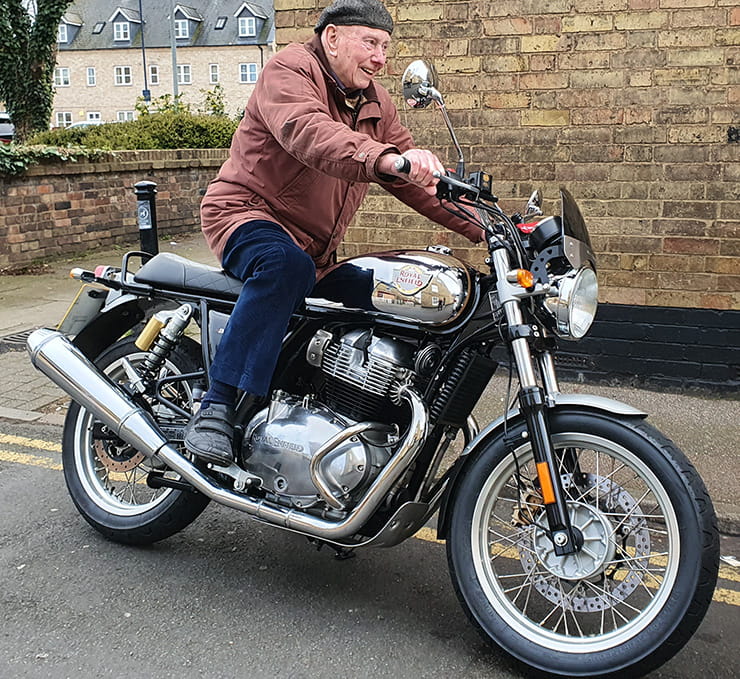 A brief history of Royal Enfield

Royal Enfields are of course made in India, but they have been for a very long time…

The company was formed in November 1891 when Bob Walker Smith and Albert Eadie bought George Townsend and Co of Hunt End in Redditch, a well-established needle manufacturer that had just begun building bicycles.

Within just two years, the pair had won a contract to supply precision parts to the Royal Small Arms Factory in Enfield, Middlesex, and changed the company name to ‘The Enfield Manufacturing Company Ltd’. The following year, all the company’s bicycles took on the name ‘Royal Enfield’, with the trademark ‘Made Like A Gun.’

Powered four-wheelers (called quadricycles) followed, but it was in 1901 that the first Royal Enfield motorcycle was built, making 1½hp and driven by a rawhide belt. 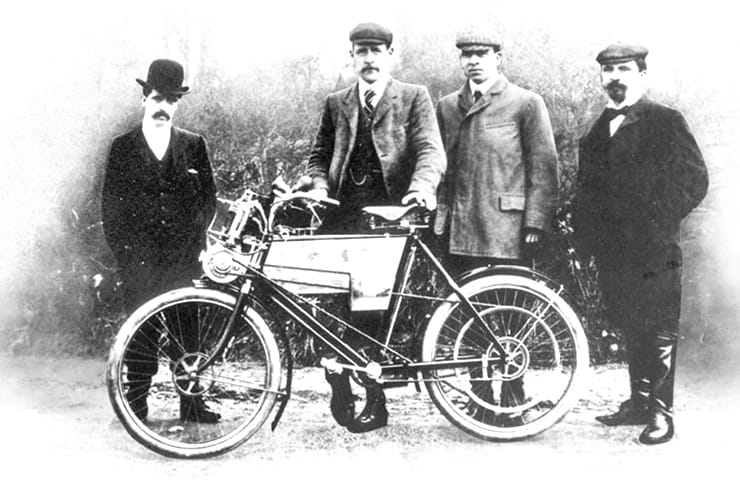 By 1909 Royal Enfield had a Swiss 297cc motor powering its motorcycles, jumping to a 770cc 6hp V-twin two-stroke in 1914 (imagine a 770cc stroker now!). During World War I, the company was supplying these bikes to the British, Belgian, French, US and Imperial Russian forces.

Dozens of models were released over the next couple of decades, but it was in 1932 that the ‘Bullet’ was unveiled at the Olympia Motorcycle Show in London. 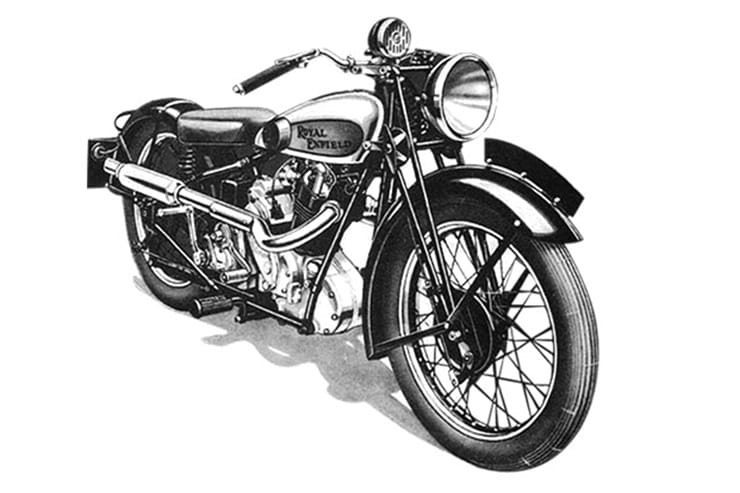 Various changes and new releases occurred over the coming years, with Royal Enfield producing large quantities of military motorcycles, bicycles, generators and anti-aircraft gun predictors (a mechanical ‘computer’ that assisted aiming of anti-aircraft guns) during World War II between 1939 and 1945. The Flying Flea was the most well know – a 126cc two-stroke that was dropped behind enemy lines in custom-built parachute cradles. 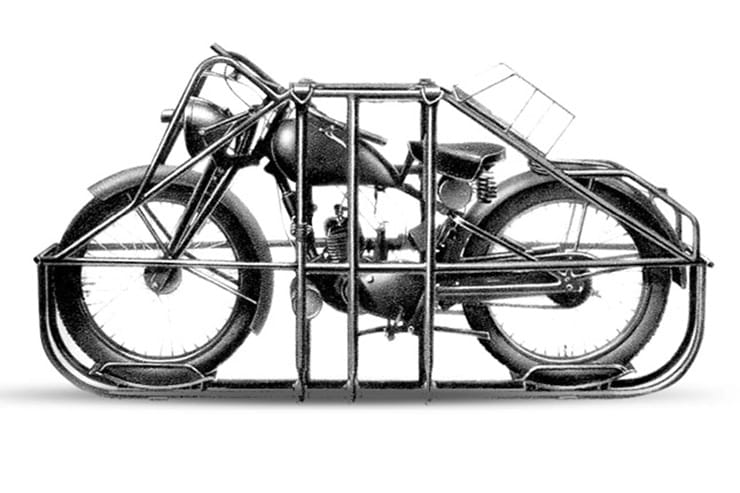 The Royal Enfield WD/RE, or ‘Flying Flea’, was designed to carry messages quickly where radio communications were not established

After the war, new Bullets were developed and in 1949 Royal Enfield joined other British bike brands being imported into India by Madras Motors.

Just three years later, the Indian Army placed an order for 500 350cc Royal Enfield Bullets thanks to their rugged build and ease of maintenance.

In 1955, the Redditch company partnered with Madras Motors to form ‘Enfield India’ and started building a new factory in Tiruvottiyur, near Madras. By the end of 1956, 163 Royal Enfield Bullets had already been assembled there, having been shipped from the UK in kit form.

The first Royal Enfield Interceptor was a reaction to the Japanese bikes flooding the UK market, and was built with a 736cc parallel twin motor until the UK side of the company closed in June 1970, leaving India to continue production.

By 1977, Enfield India was exporting 350cc Bullets back to the UK and Europe, releasing a 24bhp 500cc model in 1989. The Enfield Diesel was released in 1993, and in 1994 the Eicher Group bought Enfield India, renaming the company Royal Enfield Motors Limited.

Since then, sales of Royal Enfields have rocketed, with new factories being built and 2013 seeing the re-release of the Continental GT with a Harris Performance frame and 535cc single-cylinder motor.

In 2015 the company bought Harris Performance and established an American HQ, before setting up the Royal Enfield Technology Centre near Leicester with over 100 engineers, designers and testers developing new models in this high-tech building with direct digital links to the Indian factories.

Royal Enfield isn’t name that was snapped up by a foreign investor – the bikes have seen real evolution through the decades, and after more than 65 years being built in India, the company is constantly enhancing its products. 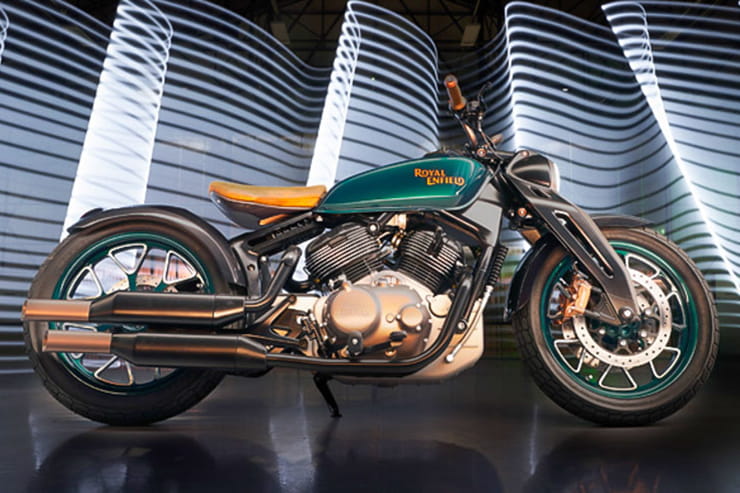