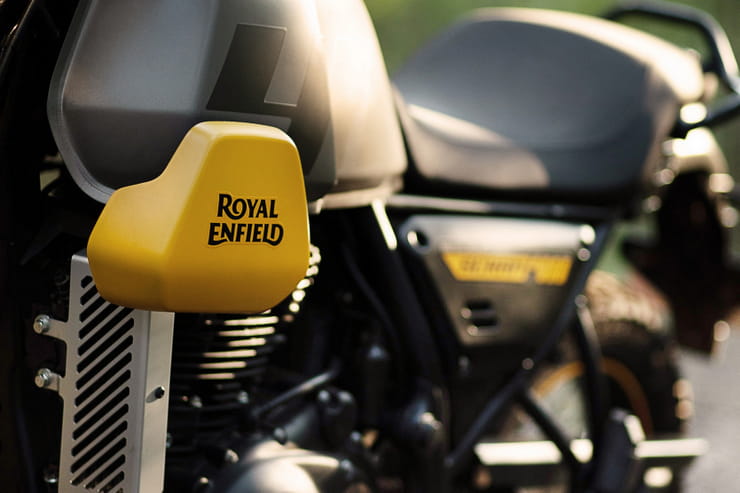 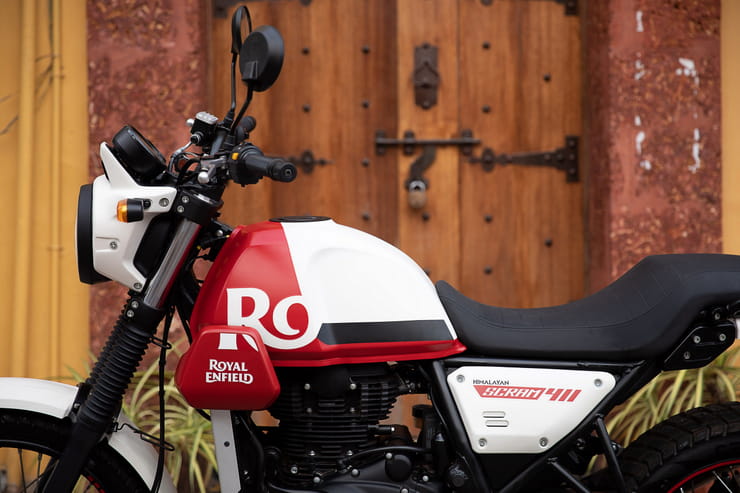 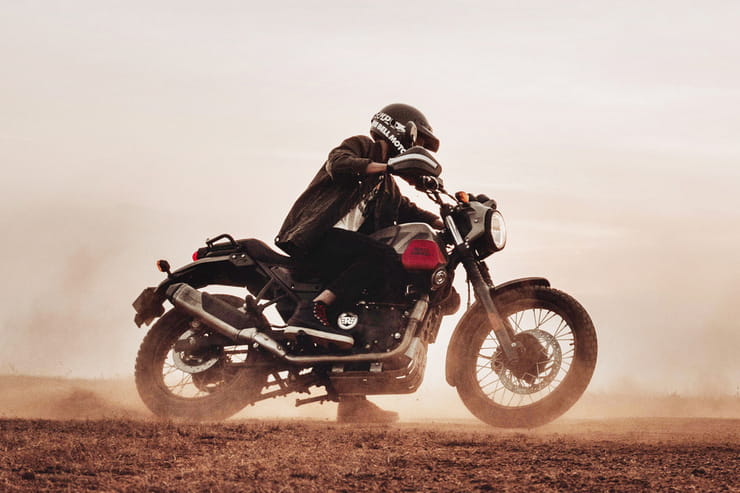 Any attempt at a veil of secrecy over Royal Enfield’s new Scram 411 disappeared months ago as rumours and spy pictures flooded the internet but now it’s been officially unveiled and promises to be an intriguing all-purpose machine for riders more concerned with rugged utility than performance.

Heavily based on the existing Himalayan, borrowing the same frame, engine, suspension and even the fuel tank, the Scram has a more road-oriented style and design focus thanks to a smaller front wheel and shorter wheelbase, which along with reduced weight should make it a wieldier proposition than the Himalayan without sacrificing too much of that machine’s off-road ability.

As you’d expect from a Royal Enfield, it’s still a bare bones model, refreshingly free of electronic complications, rider settings and digital nannies, and although it’s still a few months from the market the price is sure to be competitive. 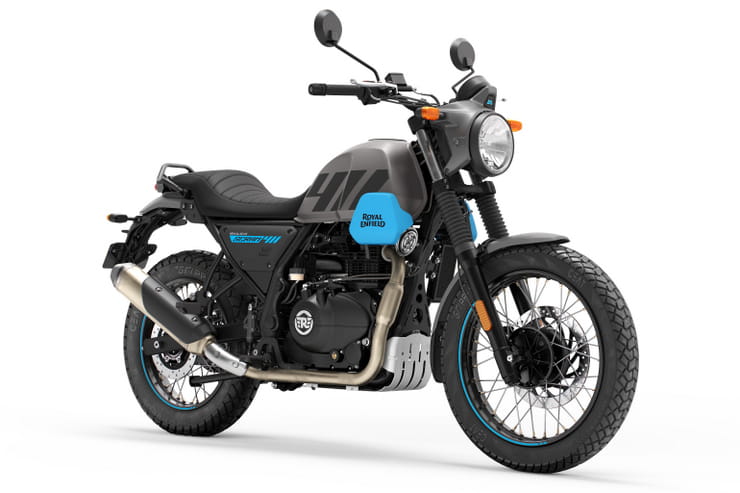 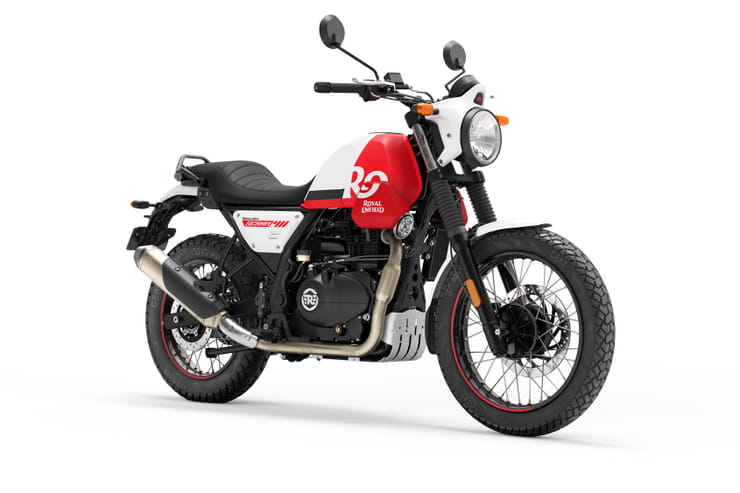 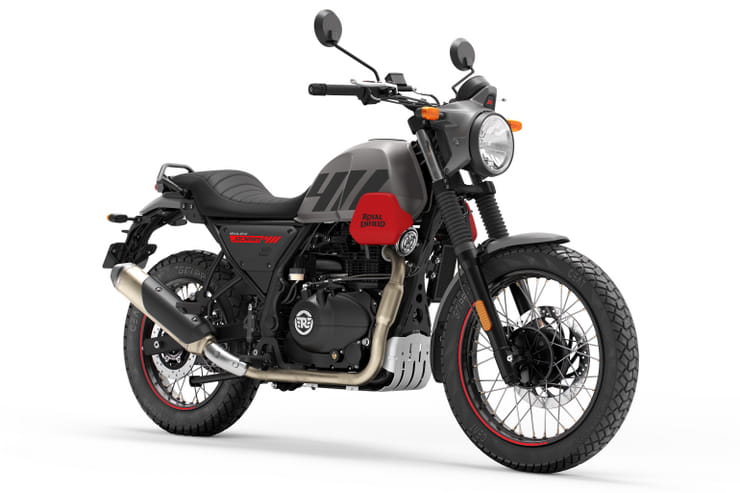 How much is the 2022 Royal Enfield Scram 411? Bikes start at £4,599 for the Graphite Blue, Red and Yellow combinations and rise to £4,699 for the White Flame and Silver Spirit colourways.

The bikes are due in dealers in May.

Performance isn’t the Scram 411’s target and that means you get 24hp to play with, peaking at 6500rpm. That comes on the back of 23.6 lb-ft of torque reached at 4250rpm. In a world of 200hp superbikes those numbers feel very small, but they’ll be enough to get the Scram past the national speed limit on motorways, even if three-figure speeds might be out of reach. 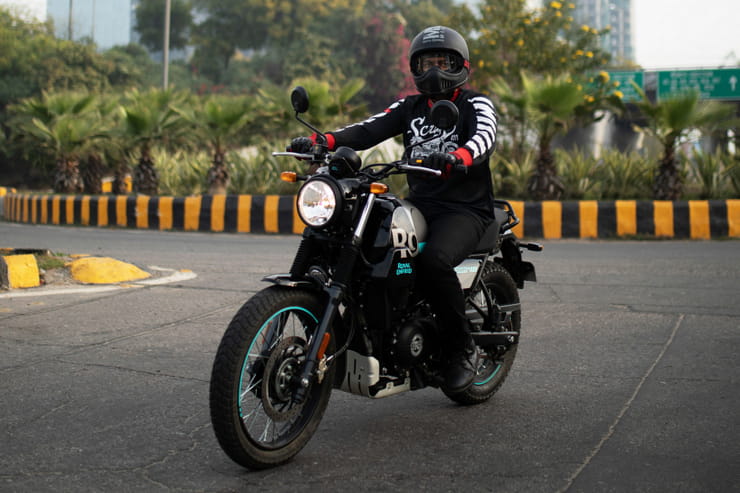 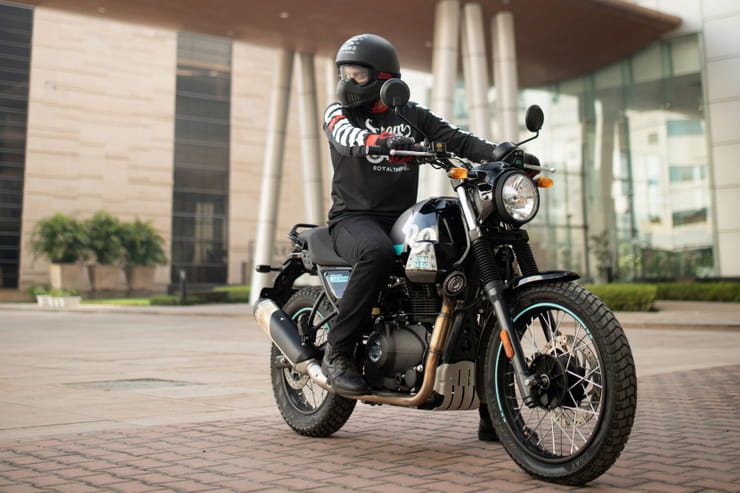 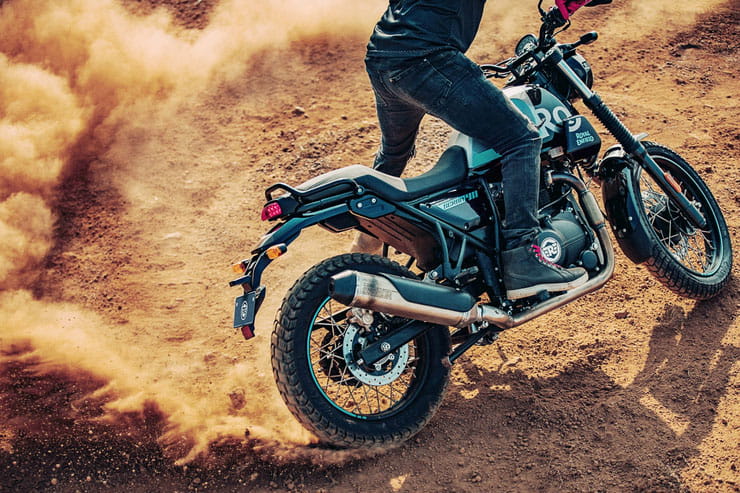 The Scram’s 411cc engine is straight from the Himalayan. That means it’s a single overhead cam, two-valve, air-cooled, single cylinder design, with an under-square 78mm bore and 86mm stroke that targets a wide spread of torque rather than squeezing out every last drop of power. It’s a basic design, but at least there’s an electric starter.

It’s bolted to a gearbox that make do with five ratios rather than the more common six, but if you’re prepared to embrace the simplicity as a virtue rather than a drawback that’s not necessarily a bad thing.

The exhaust is also directly from the Himalayan, which was updated last year to meet Euro 5 emissions limits. 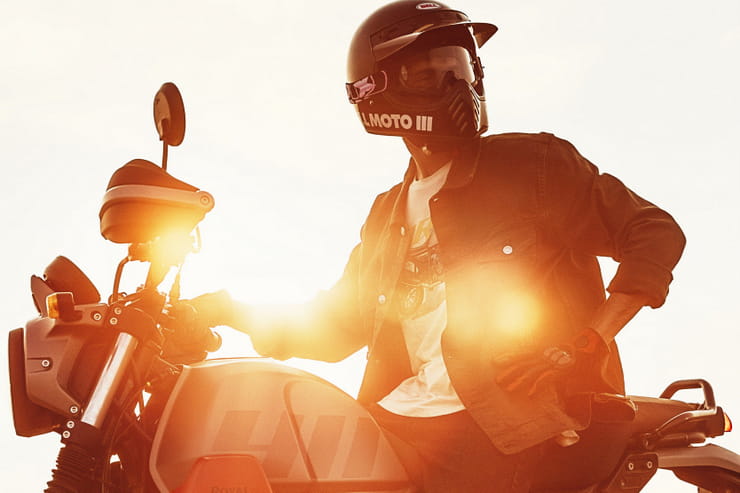 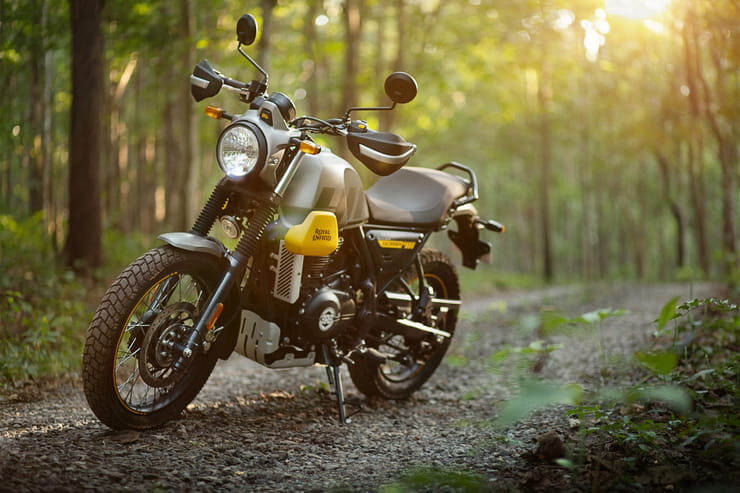 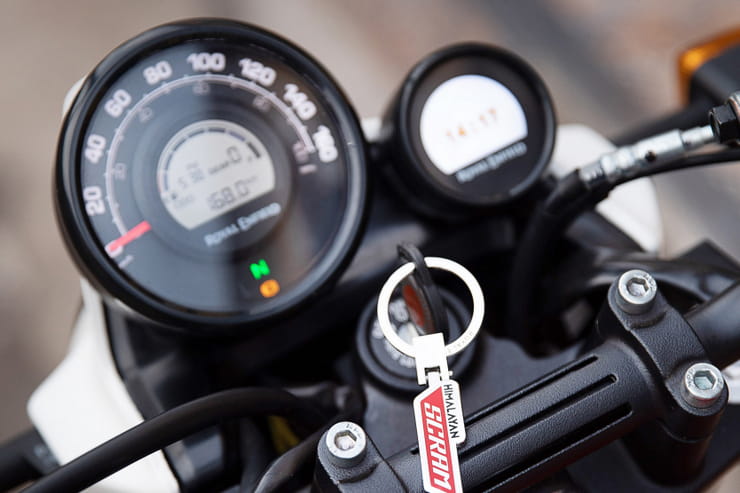 Don’t go looking for high specification parts in the suspension – the Scram’s 41mm, right-way-up forks are like those of the Himalayan, albeit with slightly less travel at 190mm instead of 200mm. That’s still far more than the average bike can offer, though, and should imbue the Scram with some genuine off-road ability. At the back there’s a non-adjustable monoshock with 180mm of wheel travel, just like the Himalayan.

The big change to the chassis (designed by Harris Performance, by the way), is the switch from a 21-inch front wheel to a 19-inch rim. Along with the shorter fork that drops the Scram’s front end, sharpening the steering compared to the Himalayan, while simultaneously chopping 10mm from the wheelbase, which comes down from 1465mm to 1455mm.

A more impressive cut comes in the weight, which is slashed from the Himalayan’s 199kg to 185kg. Those numbers aren’t necessarily comparable, though – the Himalayan’s 199kg is measured 'in running order’ (suggesting a tank of fuel) while the Scram’s is without petrol. Filling the 15-litre tank will add around 11kg in petrol, pushing the Scram to 196kg in fully fuelled form. 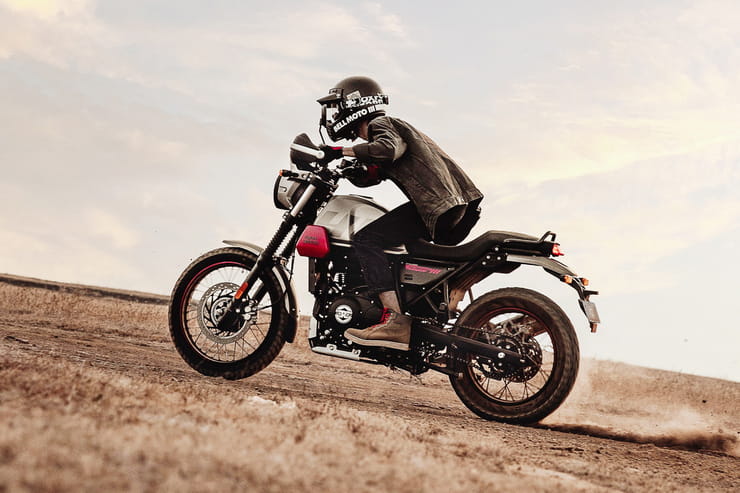 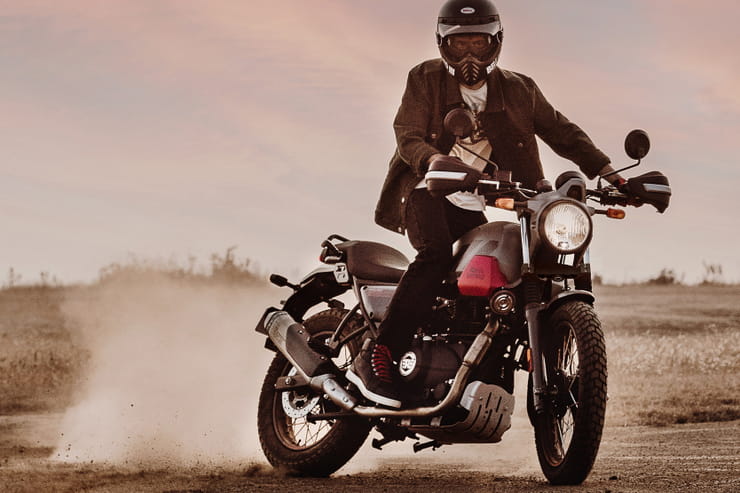 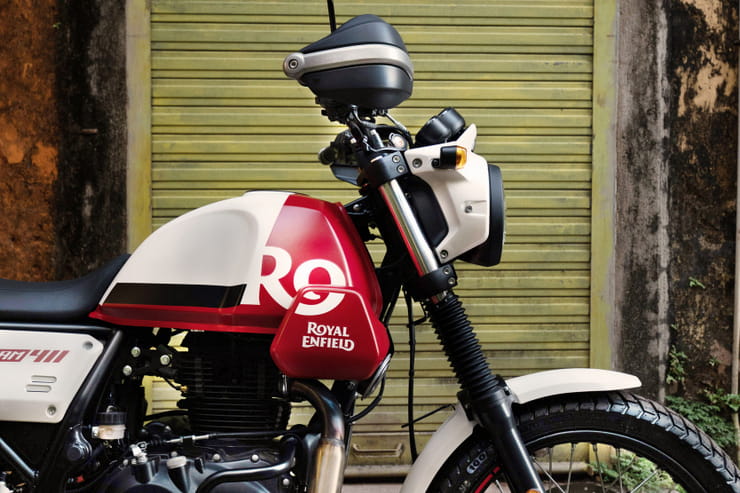 With a 795mm seat height the Scram sits 5mm lower than the Himalayan, making it a fraction more accessible to those with shorter legs, and the bars are lowered to make for a less parachute-like riding position that may turn out to be more comfortable on longer runs.

With fuel economy of around 89mpg, the 15-litre fuel tank should theoretically give a range of around 290 miles between fills.

The brakes, like the rest of the bike, are basic and borrowed straight from the Himalayan, with a 300mm front disc and 2-piston caliper aided by a single-pot rear caliper and 240mm disc. There’s dual-channel ABS, of course, to meet legal requirements, but that’s the extent of the assistance. 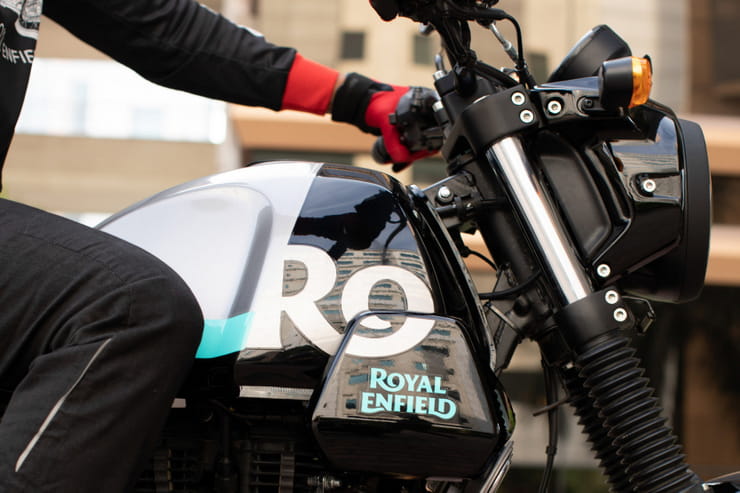 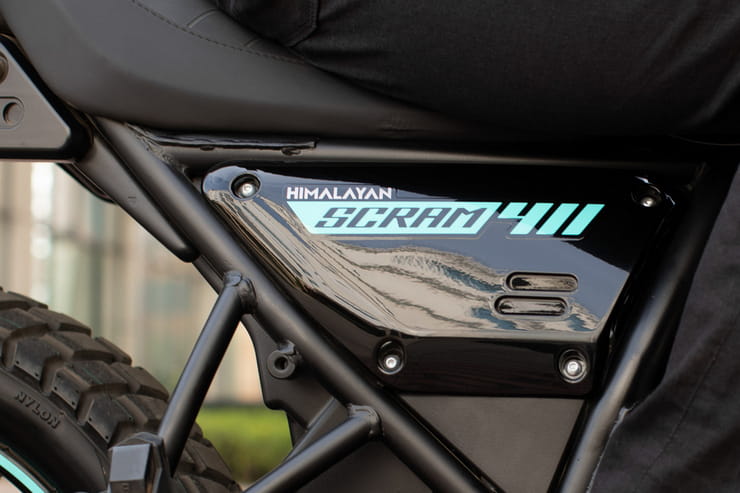 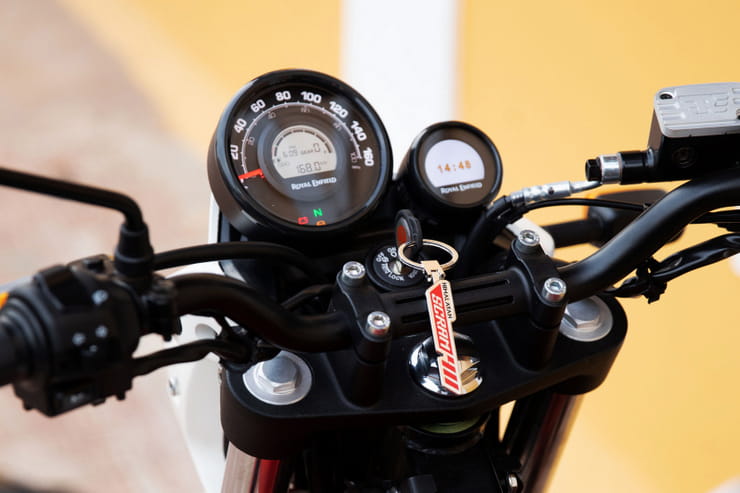 Apart from the aforementioned ABS, rider aids are at an absolute minimum here so there’s a refreshing shortage of acronyms and initialisms. On board you’re greeted by a simple analogue speedo wrapped around a small digital central screen that offers a trip meter, clock, fuel gauge and service reminder, while to the right there’s the same Tripper turn-by-turn navigation system that features on other RE models.

Finding a direct competitor for the Scram 411 is hard work – there aren’t many scrambler-style machines out there in the 400cc class.

In many ways, the Scram is more likely to be an alternative to the Himalayan than to other new bikes, appealing to customers who like the idea of the Himalayan’s simplicity but can’t get on with its utilitarian looks. Other than that, rivals are spread from lightweight, cheap 250cc scramblers to pricier 500cc-class machines, but the real competition for the Scram might well come from the second-hand market – a 2015 Ducati Scrambler with less than 10,000 miles on the clock could be had for around the same cost as a new Scram 411, and there was even the Sixty2 model for riders who really want a 400cc machine. 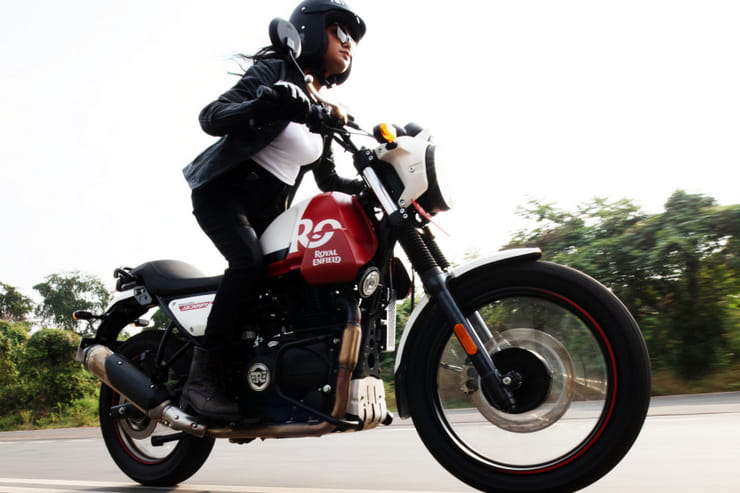 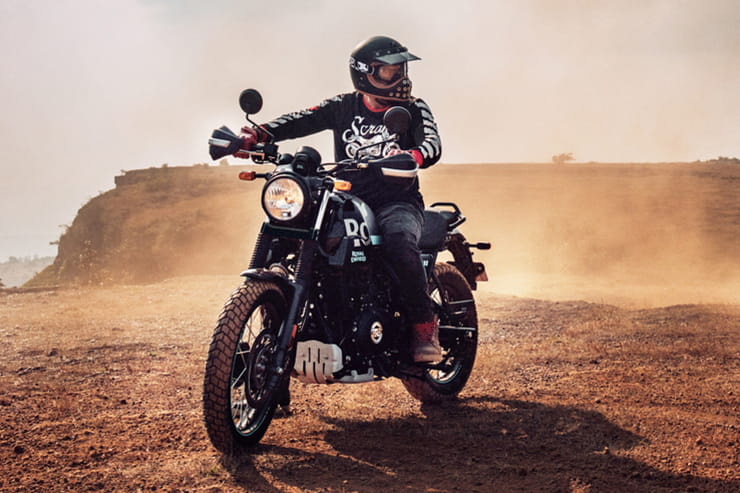