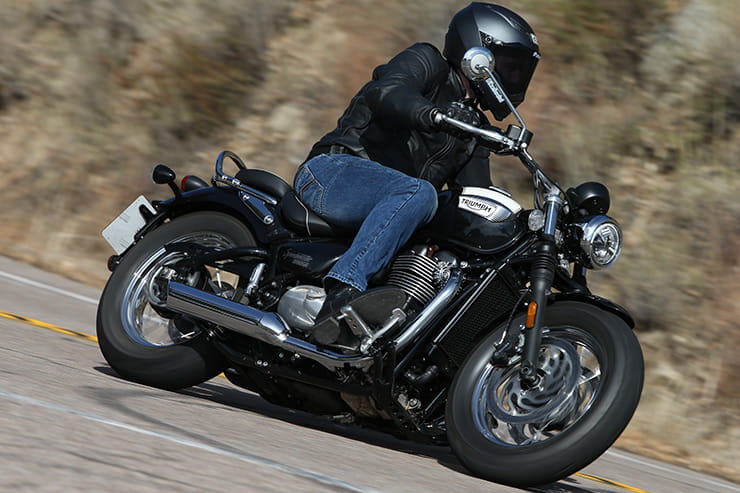 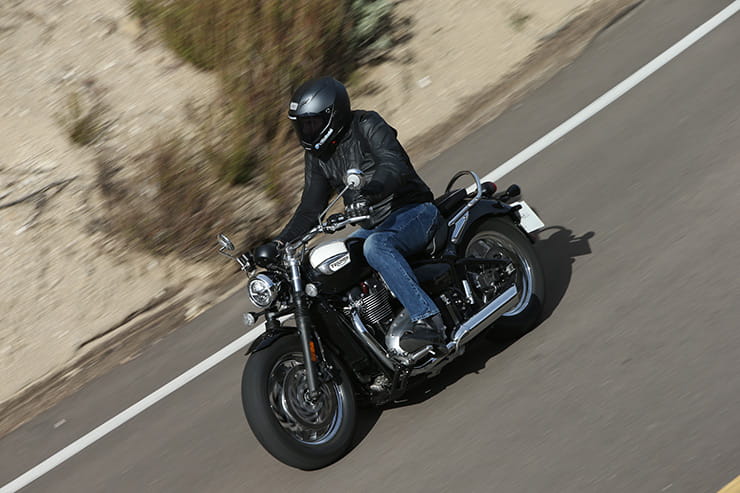 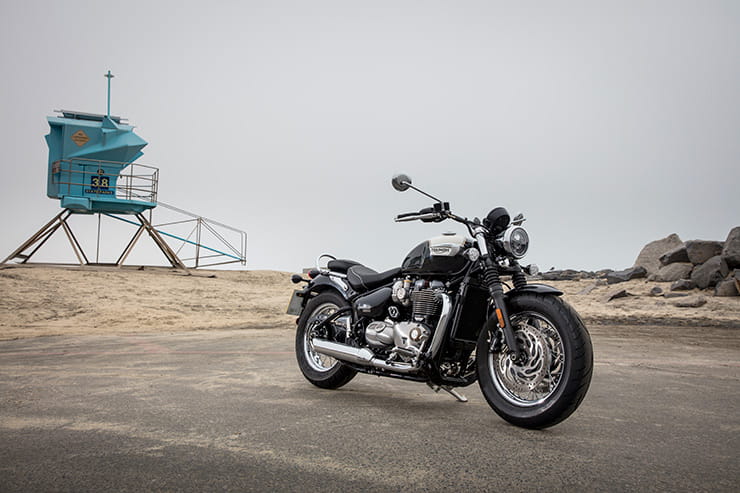 WHAT’S IT ALL ABOUT?

First launched back in 2002 the Speedmaster was designed as a ‘factory cruiser’ that complimented the Bonneville America. Its 790cc parallel twin was replaced by an 865cc just three years later and, except for an update of fuel injection, the Speedmaster remained stagnant. Until now.

So where better to hold a riding launch for a super cool looking, classy cruiser such as this than the west coast of America, just outside San Diego. Using 155 miles of coastal carriageways with a splash of highway and plenty of 2nd, 3rd and 4th gear sweeping, mountain roads further inland all with an air of both decadence and grace, floating around effortlessly – except for the occasional scraping of metal as the hero blobs wore themselves down without much rider effort.

Harnessing Triumph’s recent resurgence with the popularity of models such as the T120 and Bobber – the firms’ best-seller in 2017 – the Speedmaster uses many components from its siblings’ successes, including the heartbeat; the same 1200cc ‘High Torque’, 8-valve, liquid-cooled, parallel twin engine. The only difference is the twin air box. The T120 has a single air box while the Bobber and Speedmaster's twin set-up allows more low down torque courtesy of the way the engine breathes. Those two therefore have identical power and torque curves.

With its 270-degree crank angle and resulting firing interval plus Bobber-style tuning for higher torque and low down power, the new Triumph offers a peak power figure of 76bhp @ 6100rpm and 106Nm @ 4000rpm, that’s 25% more power and 42% more peak torque than the 2015 version. 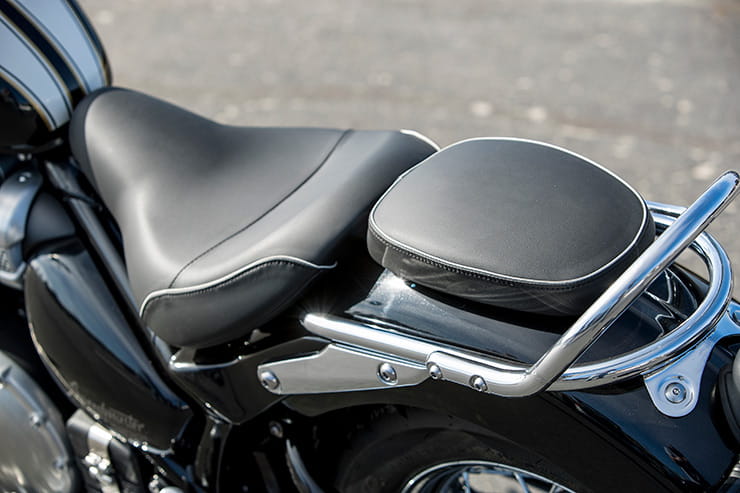 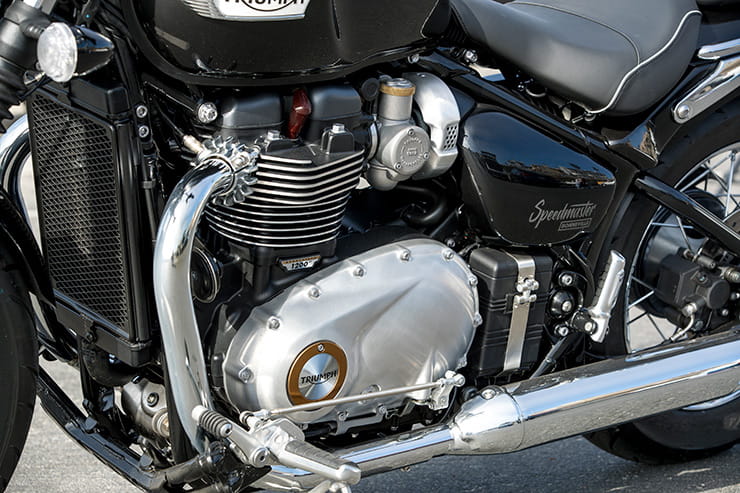 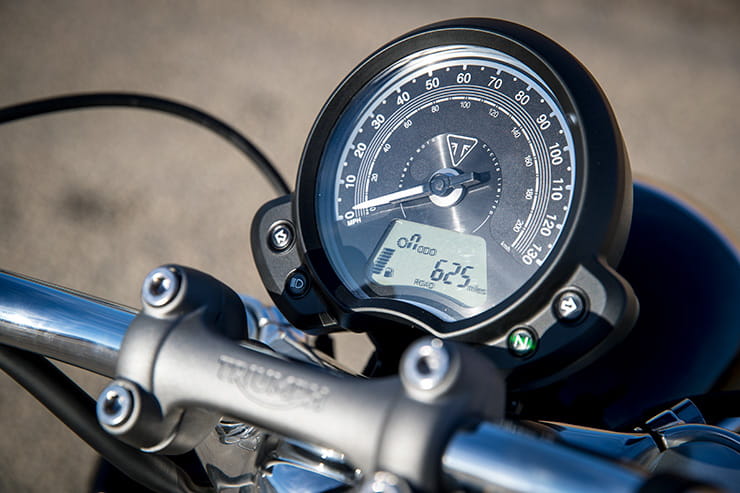 Cruising along at 70mph in top gear and the bike is quietly ticking along at 3000rpm. Lazily plodding through the miles with minimal fuss or even gizmos to divert attention away from the relaxing ride. But drop a handful of gears and through some sweeping bends of various degrees into the mix and the Speedmaster gets all interesting. The big Avon Cora tyres on the 16” 32-spoke wheels do a decent job of keeping bike connected to road while the silky suspension enhancements are a fine upgrade and cope admirably with what California had to throw in its way gliding over the imperfections of Highway 101 in particular.

STYLE AND SUBSTANCE THEN?

The Hinckley-based firm fancied a more classic laid-back British style synonymous with the Bonnevilles of the 50s and 60s, even from that famous 650cc Triumph TR6R motorcycle as ridden by Steve McQueen in The Great Escape. So the laid-back box is easy to tick with a low seat (at just 705mm), feet forward foot pegs and the beach-style wrapped handlebars, which before riding I thought looked uncomfortable. Thankfully, I was wrong.

The new Speedmaster is also equipped with a smattering (but not too much) of modern electronics and rider aids. They include ABS on the two big 310mm discs on the front wheel and their 2 twin piston floating Brembo calipers – ideal to control the massive 245kg weight (dry). ABS is also equipped to the rear single 255mm disc with a single piston Nissin floating caliper. Traction control can be turned off in the main menu but only when stationary while the deliciously responsive ride-by-wire throttle and its twin throttle bodies sing to the tune of either riding mode: Road or Rain – both deliver full power but rain mode softens the throttle response. There’s also a torque assist clutch, 5” LED headlight with daytime running light and single button cruise control which is located on the left bar requiring a single press from 3rd gear and above and available for speeds between 30-100mph. On or off but no means to adjust the speed once on, peculiarly. 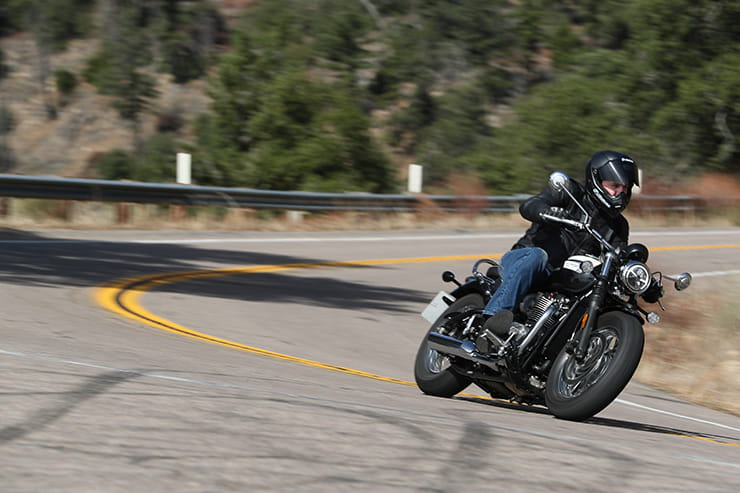 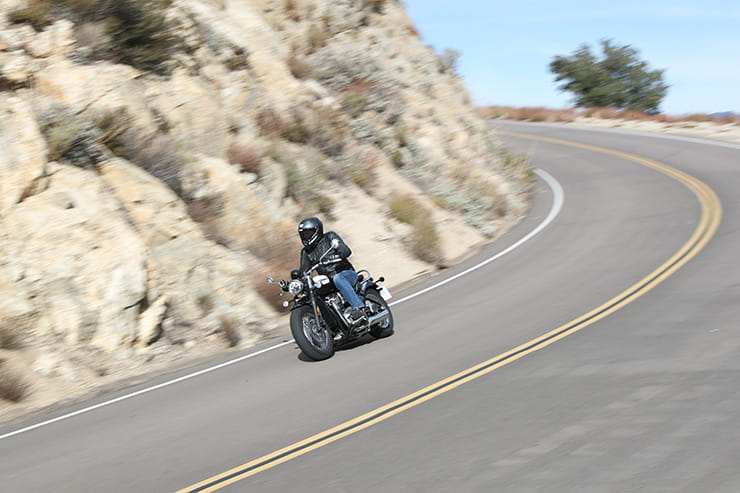 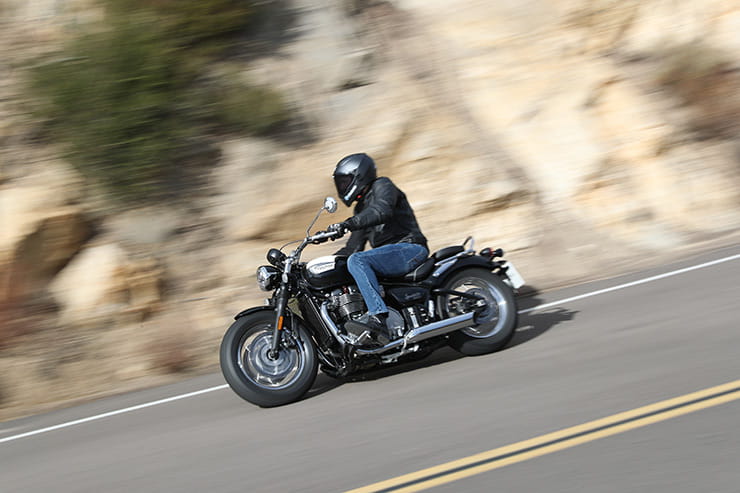 One of the smartest looking parts of the Bonneville range is also featured on the Speedmaster, and Triumph call it the ‘clean line header pipe run’ – a twin skin exhaust that appears to run straight through from the headers to the silencers. Yet actually has a hidden routing into and out of the cat box which is really tidy and neatens the appearance of a bike without any fairing as in this example

Sure, there are plenty of similarities. I even spent a bit of time looking at the accessory range to see if I could make a Bobber out of the Speedmaster and its optional extras. But the riding position and overall more classic styling stand the newest Triumph alone as a motorcycle for the more discerning rider. In turn making the Bobber duo look a little more street hardy.

The main differences between the two is the 12-litre fuel tank of the Speedmaster versus the 9.1-litre version of the Bobber. The pillion seat and accompanying grab rail plus those curved handlebars, feet forward peg position, slightly more sophisticated cartridge style front 41mm KYB front forks offering 90mm travel and the dual rate spring and pre-load adjuster in the rear (and hidden) KYB monoshock with 73.3mm travel, instead of a single rate spring in the Bobber to cope with the extra pillion weight.

The Speedmaster focuses on its touring and pillion ability and has a little more ‘grown-up’ appearance than the Bobber. Touring-wise though, I could barely manage more than 30 miles without needing to readjust my seating position care of the rather uncomfortable saddle…or maybe it’s my own body. Fellow journalists didn’t quibble as much as I did. So, for me there’d be no touring despite the larger fuel tank offering a claimed 172.6 mile range at 65.4mpg. That said, after 100 miles on my steed the fuel light came on, the digital part of the single clock reassured me there was 32 miles left in the tank. Yet, 10 miles further down the road and the range had dropped by just 1 mile. Go figure. Manufacturers claimed mpg is rarely achieved on a press launch but I damn close with an indicated 63.2mpg. 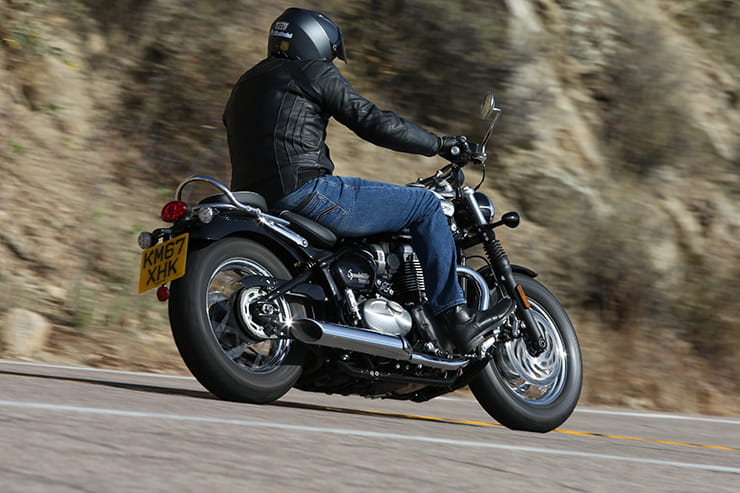 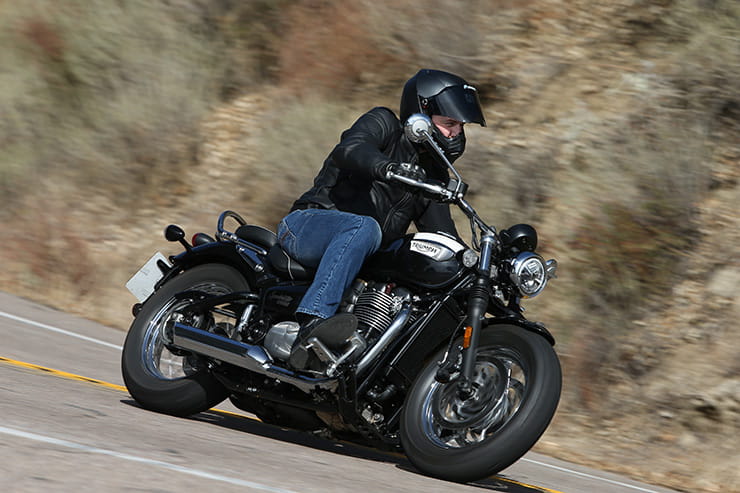 The same silky smooth 1200cc motor as has complimented other Triumph’s recently certainly looks the part nestled in the Speedmaster’s frame keeping that 245kg centre of gravity low enough to alleviate any noticeable heftiness when manoeuvring the bike around. And even on those deep Avon’s the sleek Triumph turns well with no discernible lunging through either brakes or suspension. There’s not a lot of speed to master with 77bhp hauling 245kg plus fuel, oil and rider along but Triumph rely on the engine’s torque and the bike’s panache to fulfil its focus and appeal to the appropriate customer.

Tall gears, big torque and low revs mean less gear changing and on a feet-forward cruiser that normally means a big, heavy gear peddle and resulting clunky change. Not on the Triumph though, a brief roll off the throttle and you can go clutchless for your upchange, or a slight dab of the clutch lever for added mechanical sympathy.

Feeling relaxed in the saddle with the heels of boots resting on the pegs, arms outstretched and wrists cocked outwards gripping the wrap around bars, jeans flapping around as I stretched the Speedmaster’s legs down a particularly wide section of Highway 101 running parallel with the ocean. Accompanied by the distinctive, rumbling exhaust note courtesy of the twin airbox with twin filter design and hidden cat box for optimal volume. And as the sun began to lower toward the Pacific horizon, it’s rays glistening over the gleaming paint work I could have easily expected a film crew in a helicopter to be flying above recording the opening sequence to a big-budget movie. Cool points: maximum.

I usually rely on 150+bhp for my kicks but this Triumph has a certain quality and despite the coccyx-based discomfort I started thinking about owning one. How and where would I use it in the UK? Summer Sunday rides mainly. Anything coastal. Short trips to local cafes, yeah it’s a posing machine. 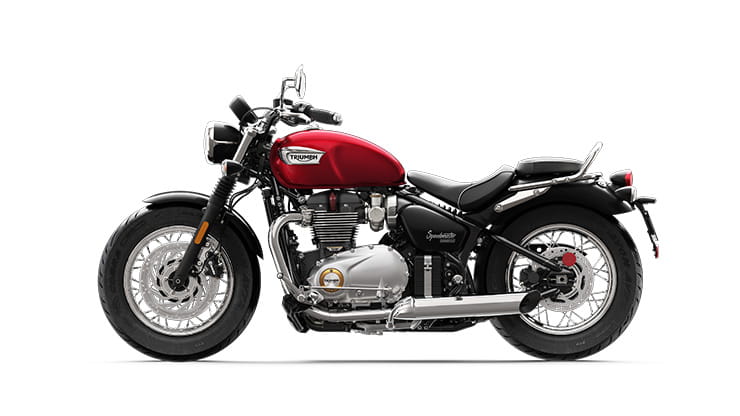 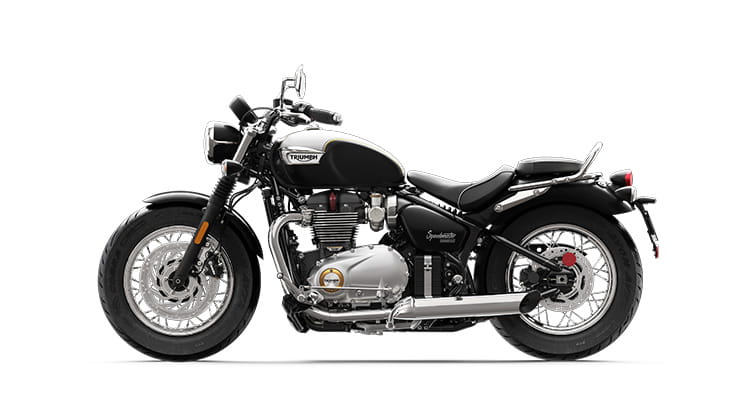 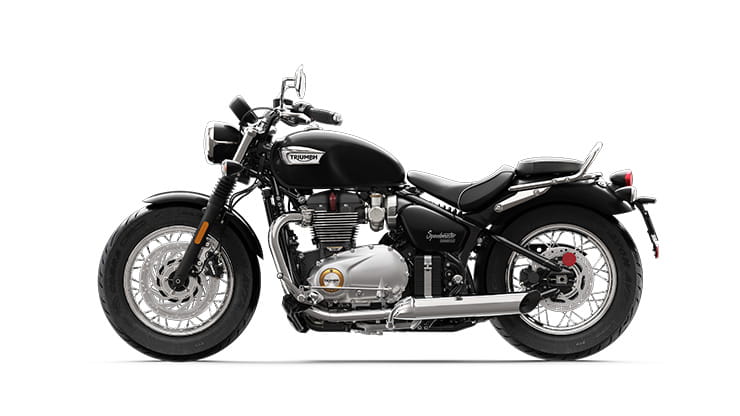 Available in the UK from early March 2018 and the Speedmaster’s first major service interval is a handy 10,000 miles away from new. 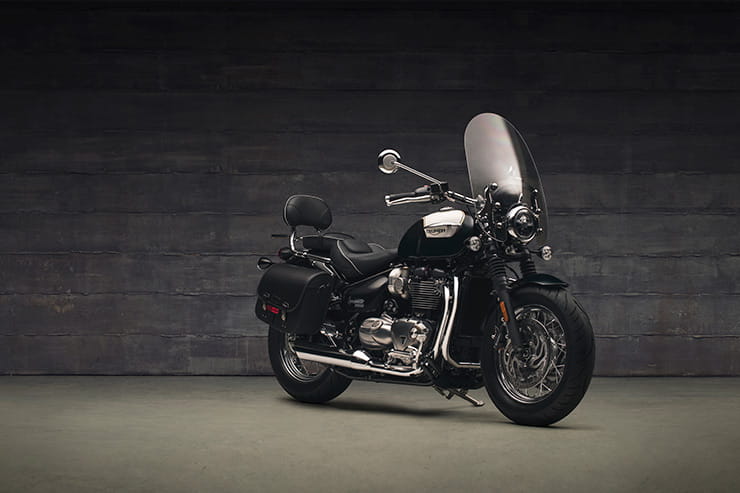 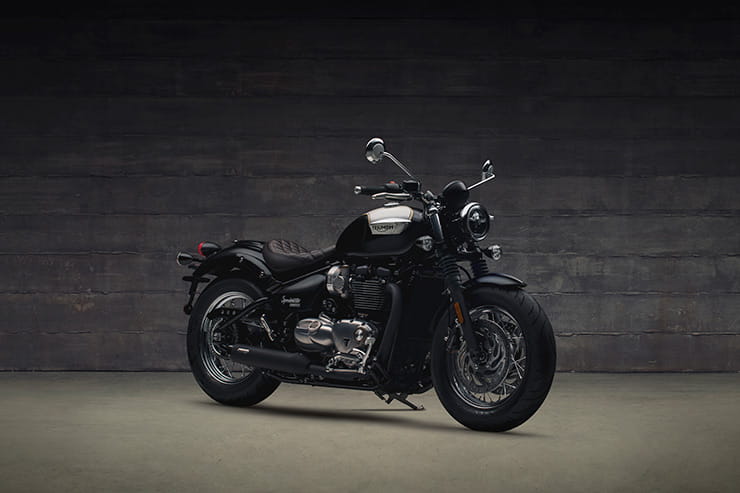 Nope not Vinales nor the Tom Cruise character but I managed to nab one of the two inspiration kitted bikes Triumph have created with a bunch of factory accessories named above. The Speedmaster takes on a more rugged look and sound.

Reaching for the flatter bars means an alternative and less comfortable riding position but thankfully the kit comes with a quilted brown leather seat which is superior in its plushness and depth than the standard seat, which I didn’t particularly enjoy. The mean looking black exhausts and silencers give the bike a sharper appearance which would be even stealthier on the Jet Black version…and paired with the black spoke wheels from the accessory range. 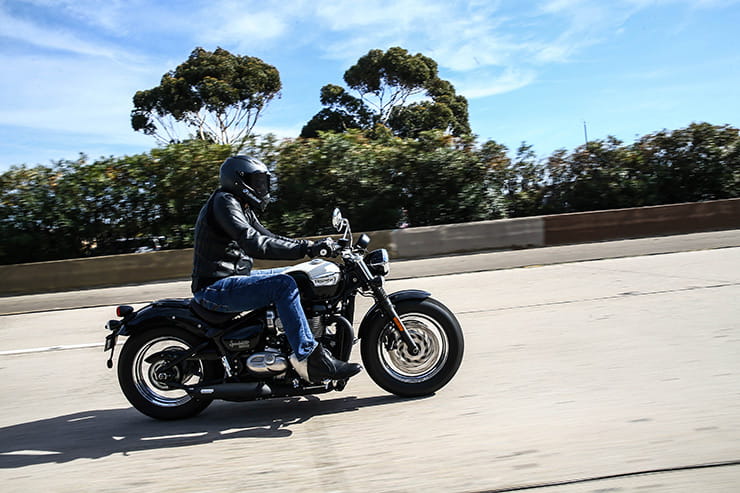 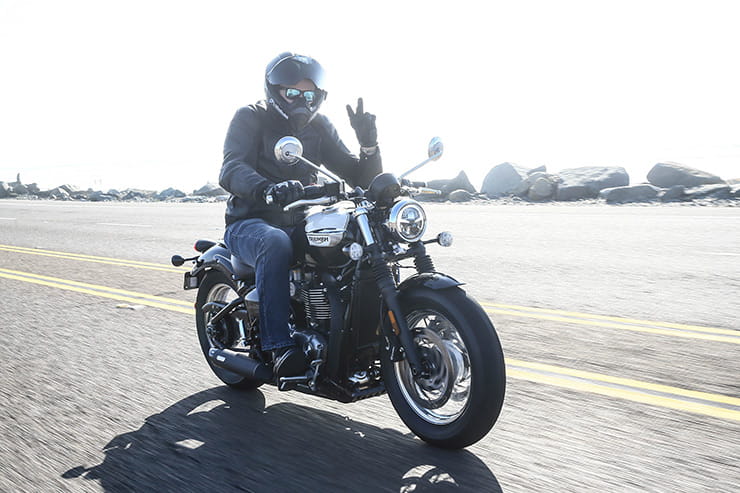