Can you crash the Yamaha Niken? 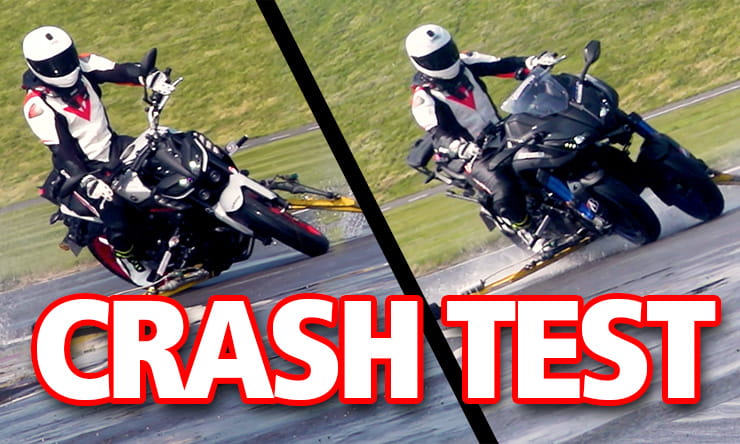 With two wheels on the front and claims of an 80% greater contact patch, can you crash the Yamaha Niken?

Short answer… yes, you can. So what’s the point in it?

Having ridden one for almost 4,000 miles over six months (including winter), read on and I’ll explain more, but first, watch our exclusive crash test video…

What’s the point in the Yamaha Niken if you can crash it?

If you’re new to the Niken, there are a few key things to understand;

So what’s the point?

Yamaha claims that the two 15” front wheels give an 80% greater contact patch than the 17” single wheel fitted to the MT-09 that the Niken shares its engine with.

But that can’t be because there are two wheels; if you could add another wheel to an MT-09 without increasing the weight at all, the total area of tyre in contact with the road would be unchanged. A contact patch is determined by the pressure of the air in the tyres and the weight bearing down on them.

A Formula 1 car can take advantage of its massive rear tyres due to the downforce generated by the wing. At high speed, more weight is applied to the wheels, giving increased grip. But when the car slows down, the weight disappears, so it doesn’t affect acceleration.

While it’s certainly a radical design, the Niken doesn’t have a big aerofoil. What it does have is 70kg more weight on it than the MT-09. I’d estimate that about 50kg of that is on the front end, which pushes the two tyres harder into the ground, increasing the contact patch.

I measured the contact patch of the MT-09 and Niken by jacking the bike up on an Abba Sky Lift, painting the tyres, then lowering the bikes onto paper (with me sat on them). You can see the Niken dropped to one side slightly, and if you’re geeky enough to count the squares (each half a centimetre), you’ll know that the MT-09 front tyre appears to have a contact patch of approximately 31.5cm2, while the two Niken tyres seem to total 65.5 cm2. That’s an extra 108% contact patch, so this rough and ready test is clearly flawed, but it’s an interesting view of them nonetheless.

Yes, after testing it with precision rider Chris Northover in the video above, we know that they do. We did datalog the bikes, but the graphs weren’t clearly showing the exact point at which the machines dropped. Chris explain that; “I spent a long time analysing the data; the strongest conclusions I pulled from it were that both bikes let go at a similar speed when trail braking (around 15mph) and at similar points in the turn. However, from the point of hitting the brakes, to turning in and then to the apex the Niken consistently was able to decelerate (brake) harder, taking more braking force before it locked up.”

The two front wheels also give you more confidence, as the Niken tends to understeer before it folds under. I’ve had this happen three times while I’ve been on the bike; twice on wet roundabouts and once (when I’m sure I would have crashed a ‘normal’ bike), on sheet mud. You can read more about that here.

This drifting of the front is far more desirable than tucking it under. Of course, it doesn’t stop you losing the back, and some (who haven’t ridden it) have theorised that the Niken will be more prone to losing the rear. I haven’t found that to be the case, but I have had the back come out on me on a cold roundabout with cold tyres.

Still, I stayed on, as did the rider in the video below. This guy originally claimed that there must be something wrong with the Niken or the tyres. In his comments he swears that there were no pot holes or gravel, and that he’s ridden that road a lot faster on his other bikes. But he’s since gone back to say that he later found a six-inch wide gravel strip on the road, and that the Niken wasn’t to blame.

Without the extra grip and stability offered by the Niken (chances are one of the two front wheels hit that gravel, but the other stayed on firm tarmac), I’d bet he’d have been off. Watch the video and see what you think:

Another way to look at the benefit of two front wheels is in having redundancy built into the system… Let’s say you’re riding around a corner on the three-wheeler, and your tyres are only using 30% of their potential grip. A two-wheeler is ahead of you, and that’s also using 30% of its potential grip. So both motorcycles have 70% of their potential grip left to spare. But on the next bend, there’s a man-hole cover that’s been smothered with lard. The front wheel of the standard MT-09 loses all grip, the front folds and the rider ends up in the ditch.

Following too close on the Niken (silly), you don’t have time to react, and your left front wheel hits the fatty metal hazard; all grip is lost to that hoop, but the right still has its half of the 70% spare. You make it round the bend, because on unsullied tarmac the right tyre had a potential 50% of grip, but it was only using 15%. When the left lost all its grip, the right took on that 15% and still had 20% left to spare.

Who’s the Niken for?

We’ve determined that you can crash the Niken, but that it gives you far more warning before it’s fully lost. Some social media commentators are claiming that it’s for ‘those who can’t ride’, or for new riders. I’d argue that point – for its stability and confidence-inspiring nature, it’s potentially a brilliant machine for touring, especially into the Alps or other areas where the roads could become less grippy.

With a 195kg load capacity, it’s also more than capable of taking a pillion and full luggage. For a couple on a tour through the UK and beyond, the Niken could be a superb option, though it would benefit from a larger tank – you’ll typically be looking for fuel around 140-150 miles into a ride.

You can’t beat physics – push hard enough, and you can crash a Niken, but the rider in the video above says that he rides that road through winter on a Tiger 800, and with the front wheel off the ground on his MT-10SP; if that’s true, the Niken has proven itself useful for more than just new riders. While better observation could perhaps have saved that slide, the two front wheels almost certainly stopped it becoming a full-blown crash, and of every rider of all experiences that we’ve spoken who have ridden the three-wheeled Yamaha, it has a hell of a lot of potential.