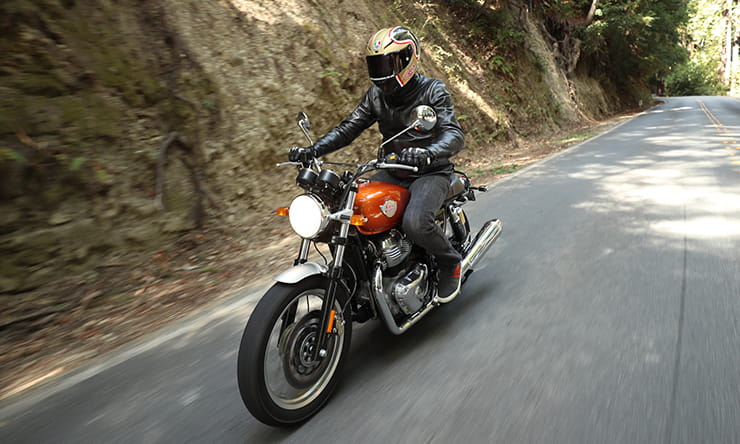 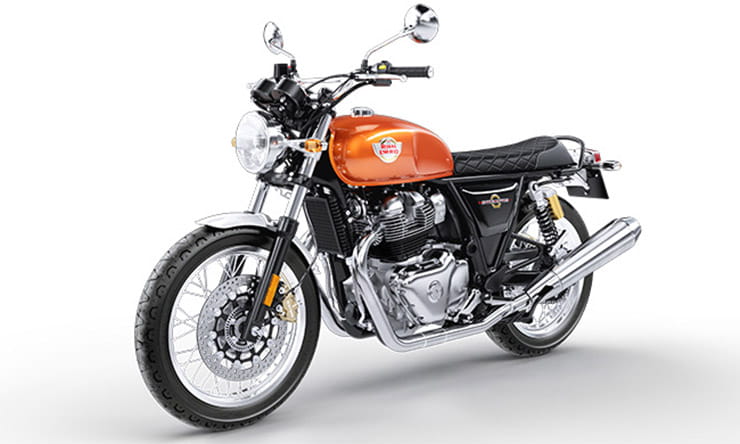 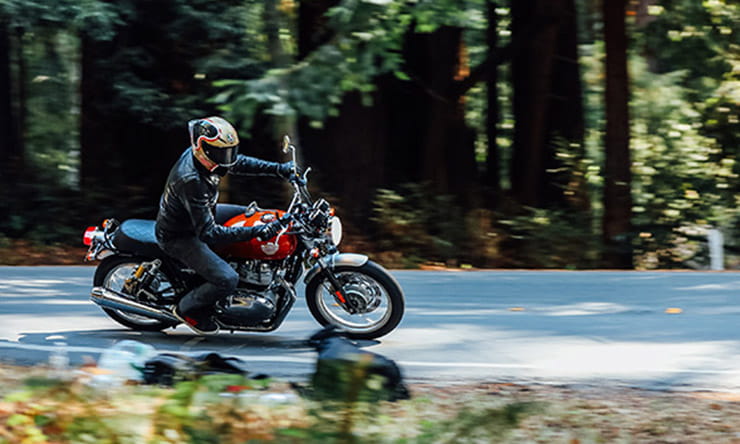 Royal Enfield’s Interceptor 650 is one of the company’s first twin-cylinder motorcycles in over 50 years and sits alongside the Continental GT sharing the brand-new 650cc motor.

It is possibly the most important moment in Royal Enfield’s illustrious history. Part of a new chapter in the great British brand that has been under Indian guidance since 1994. “A company with UK roots, an Indian soul and a global approach,” says its Chief Executive, Siddhartha Lal.

The bike is very much a modern-day classic with a retro roadster appearance distracting the eye from its 21st century development and build. Royal Enfield is on the up; from 50,000 bikes built in 2010, the firm made 890,000 last year and promises a capacity of 950,000 when by August 2019 driven by the Oragadam factory and the new Chennai-based technology centre.

Underling the significance of the new 650 twins, Lal stated at the international press launch in Santa Cruz, California that the project is “the biggest and most important in my career.”

With nothing but the most basic operations heralding back to a simpler motorcycling era, the Interceptor is a real treat to ride, reaching in and bringing out your most relaxed riding state. 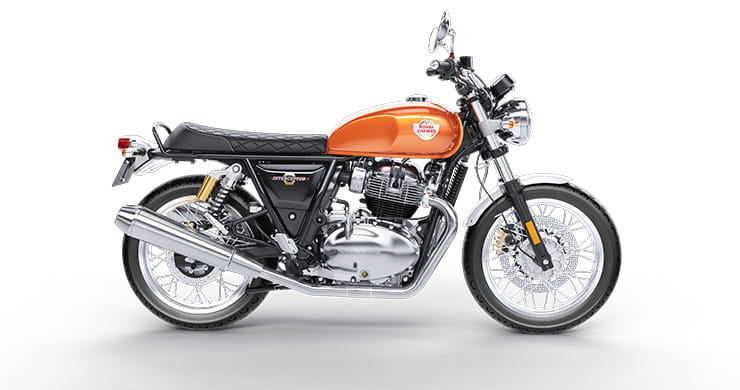 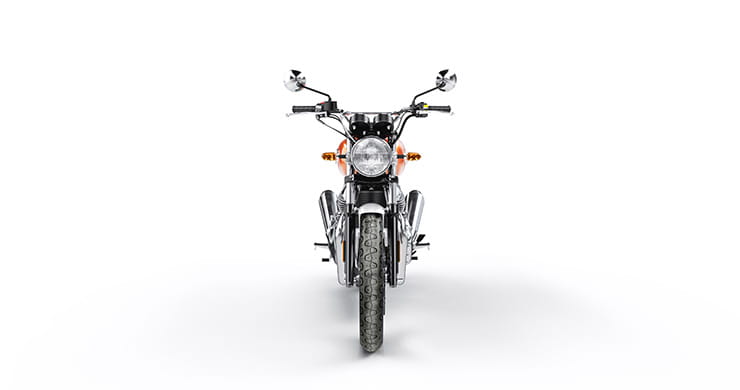 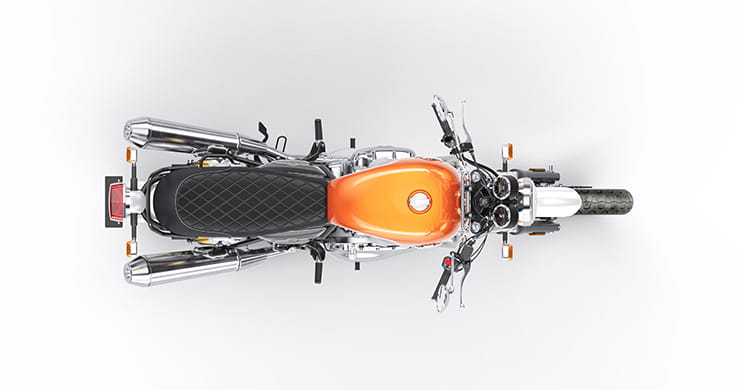 Well, this is embarrassing for Royal Enfield. Having been introduced to the world back in November 2017 at the EICMA show in Milan, it wasn’t until 11 months later that the production-ready bikes were ready for us journalists to ride and yet the only price that has been announced (at the time of writing) is that of the USA market. And while a price in USD might not be very helpful for the UK market, it does provide an approximate given the difference between the Interceptor and other current RE models and the fact that as a rule the UK price is almost identical. So, an educated guess would see the Interceptor starts at £5799. Add £200 on for one of the custom painted fuel tanks and a further £500 for the chrome version. No set date has been announced for their availability in the UK but it’ll be very early 2019 and you can choose from 6 different tank colours: Mark Three (black), Glitter & Dust (chrome), Orange Crush, Ravishing Red (actually red and black), Silver Spectre and Baker Express (White and red).

What Royal Enfield did tell us is interestingly the price will include a 3-year warranty and free roadside assistance.


Originally the project was going to focus on developing a 600 twin but the need, especially to meet the demands of the Indian market - a huge part of the sales success over the last decade for Royal Enfield, to make the bike achieve 100mph meant a 650cc was required.

The motor makes 47bhp but not until way up at 7,250rpm although crucially the bhp figure equates to 35kW which in turn means that an A2-licence holder can enjoy the Interceptor… and not feel too overawed by its power. Cruising along at 70mph in 6th gear and the bike will be ticking along nicely at a smidge under 4,000rpm but go for an overtake and the 52Nm of torque will need some gear-shifting assistance.

Town riding is a doddle with a light-weight clutch, an emphatically brilliant throttle response and a torquey low pull – in fact 80% of the torque is available at 2,500rpm. 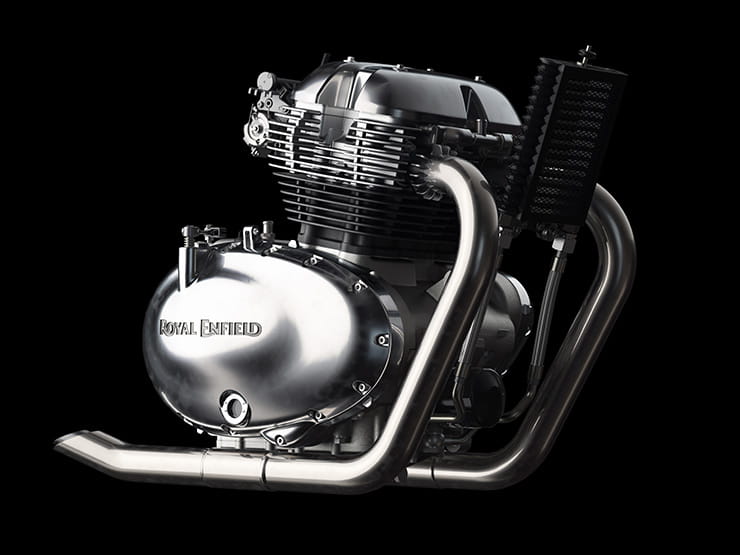 The right-hand side of the new 650 twin-cylinder motor


The middleweight market better shape up with the Royal Enfield 650 twin in town; this air-oil-cooled engine is a peach. Easy to use and easy-to-tame with enough low-down grunt for an A2-friendly machine. Skipping around the slower roads or even cities will be a much happier experience on a bike like this, which then begs for revs and a full roll of the right wrist when on out in the open. It’s a big roll too. RE are using a 6-speed gearbox for the first time and it’s a good ‘un with a neat, precise and barely audible clunk each time a new gear is selected. A slip assist clutch allows for quicker, smoother down shifts without locking the rear wheel as well as a lighter clutch action – despite the lever’s size.

The overall feel of the engine, from the sound to the fuelling, throttle action, seamless power delivery and beyond is impressive given the price of the bike. This new chapter represents an opportunity to alleviate previous misconceptions of the brand and its former flaws because not only massive investment taken place with multi-million pound research and development centres in Chennai, India and Bruntingthorpe, UK but the expanding employee base is chock full of talent, all seemingly focused on understanding then serving their target audience. They’ve performed a phenomenal task by creating a brand new classic bike utilising their engineering expertise and making a nostalgia-laden motorcycle with all the qualities of modern day machine. Speaking of which, a 1007-point check taking 6 hours takes place by one individual each time a bike is rolled off the production line, known as a ‘maturity process’ the post-production check-up focuses on every detail from indicator alignment to ensuring the wiring loom isn’t scuffing anywhere.

Yes there are vibrations from the engine but that adds to the experience of the ride as well as enjoying being mechanical aware of the 270-degree firing order. A 180 and even 360 version were tested in the development process but the decision was unanimous among test riders. A counter-balancing shaft eliminates a large proportion of the vibes.

A twin exhaust upswept set-up splayed out either side of the rear 18” wheel sanctions the mind to assume it’s a larger capacity machine. Allowing the engine to bellow its typically twin burble is a job well done, the soundtrack is a real highlight and one of the press launch bikes had been fitted with the optional S&S slip-ons for added perk whether at idle or cranked up to ten on the rev counter scale. Boy does it make some racket for a 650. 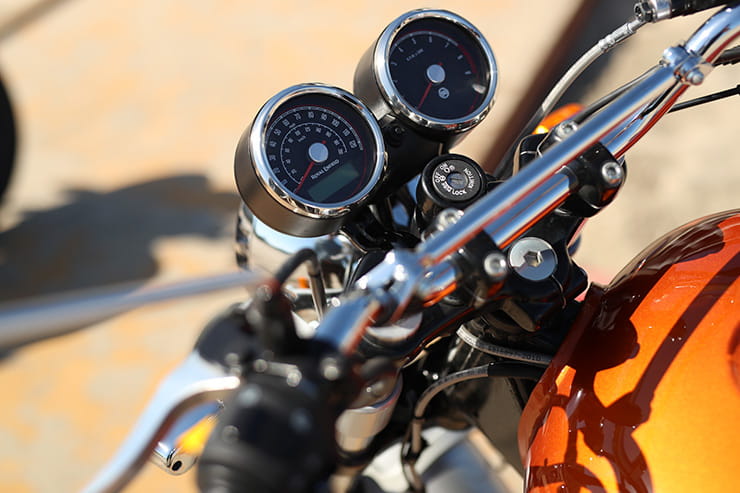 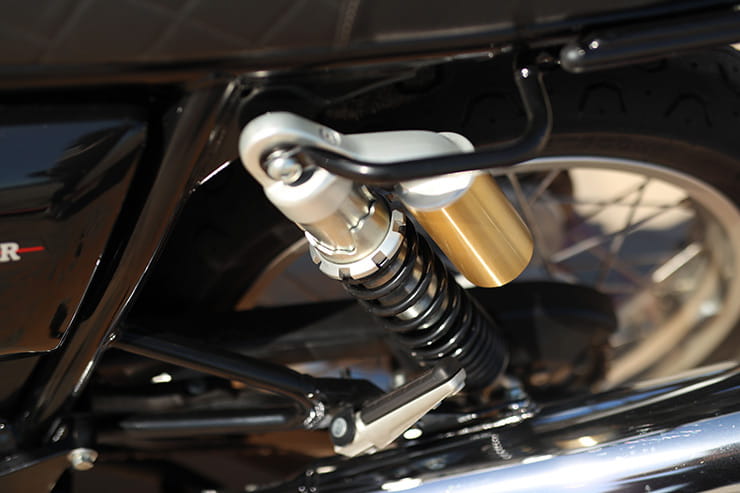 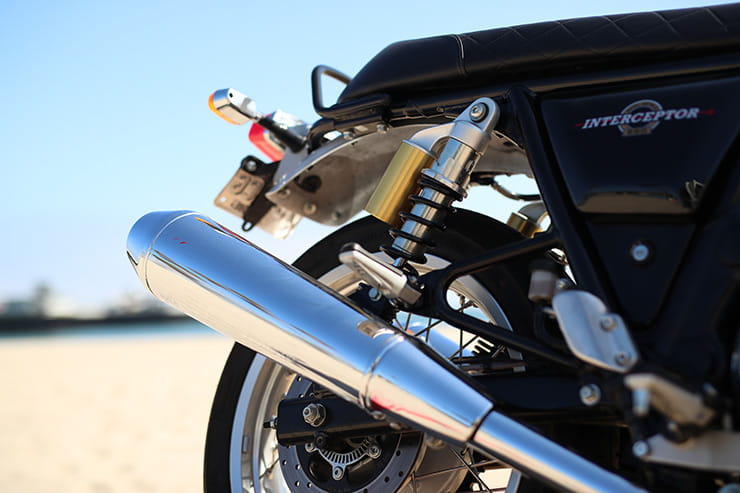 
When brimmed, the 13.7-litre fuel tank will take you beyond 150-miles if a) you don’t ride it like a lunatic, and b) if you’re brave to eek out 150-miles before spotting a fuel station. The energetic press ride of 130-miles covered a stretch of Route 1 (Pacific Coast Highway) cruising north along the coastline from Santa Cruz to Pescadero before heading inland and to the twisty hill roads around La Honda to the West of San Jose. On test I managed 51mpg and while the manufacturer claims 70.5mpg, the Interceptor will easily offer 60mpg when ridden sensibly.


For a bike with such a low price point there had to be a little compromise somewhere but, on the flipside, there were corners that absolutely could not be cut. A test rider told me that if the tyres were not Pirelli Phantom’s then he’d not be signing it off at that particular development stage. Meanwhile, and this is typical of a press launch that is designed to test the motorcycle across a variety of situations, road surfaces and pace, the rear suspension is a wallowy. When used in more real world conditions such as commuting or mucking about on a Sunday then there’s almost no issue but when pushing on and attacking the smoothly surfaced yet faster corners and the thing bounces around like a blancmange. Like I said though, it’s not much of a concern because threatening Marquez-levels of corner speed is not the Interceptor’s forte.
Just like many of the bike’s components, the chassis matches that of the Continental GT and was developed and built by Harris Performance – the company owned since 2015 by Royal Enfield. A sturdy cradle-type structure with a wheelbase that allows for a degree of rigidity and a whole lot of performance carting around the 202/213kg (kerb weight) with aplomb.

The Interceptor comes fitted with a pair of Pirelli Phantom boots. The front is a standard tyre from Pirelli but the rear 130/70-18 is specially made. They offer plenty of grip and performance under braking for a model of this aptitude. 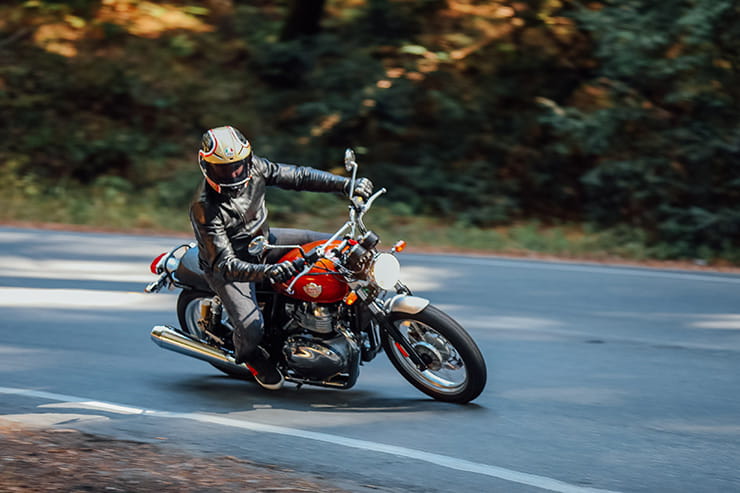 
A single 320mm disc on the front abled by the twin piston ByBre (Brembo’s budget range) and a dual-channel Bosch ABS system is enough to halt this 202kg (dry) motorcycle well enough. The twin cylinder engine offers a little extra help with engine braking and the rear brake helps settle the bike on the approach to a faster turn. A higher spec bike would need twin discs but the single version is just enough to get by.


The riding position is spot-on with an 804mm high seat which is narrow enough at the waist to make getting on and off simple and standing flat-footed not a problem for the shorter among us. A diamond quilt-pattern stitched seat fits the bill as far as the 60s retro aesthetics go but isn’t so easy from a practical perspective after 30-miles or so. A wide set of bars once again add to the charm and the vibe. The large yet non-adjustable front brake lever is set slightly too high for my preference but with a slip-assist clutch lurking beneath, at least the clutch action is light enough.

My only gripe with the riding position is with the footpeg mounts – they’re a little cumbersome and actually push your feet further out from a natural straight-down position.

Meanwhile, the 40-strong accessory range includes a fly screen, neat little finishers for the bar ends and rear shock pivots plus a couple of seats and the super fruity sounding S&S slip on silencers. Bespoke luggage and the obligatory range of t-shirts, bags, gloves and jackets complete the full-factory look. 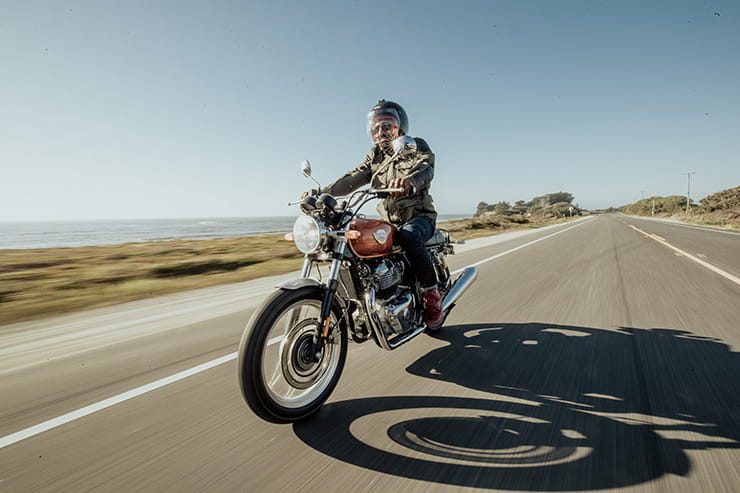 
We’re expecting the cherry on the icing on top of the cake to be a very agreeable price which will worry Triumph’s forecasted sales of their Street Twin. Designed to appear as a classic but with refined, stylish, minimalist lines, the Interceptor offers easy and manageable motorcycling with appeal to A2-licence holders. With the expected price tag in mind (for now), on offer is a classy ride from a cracking chassis coupled with an engine that’s smooth, receptive and beautifully fuelled, the Royal Enfield resurgence led by the two 650 twin cylinder bikes is firmly underway.

Three things I loved about the Royal Enfield Interceptor 650 …