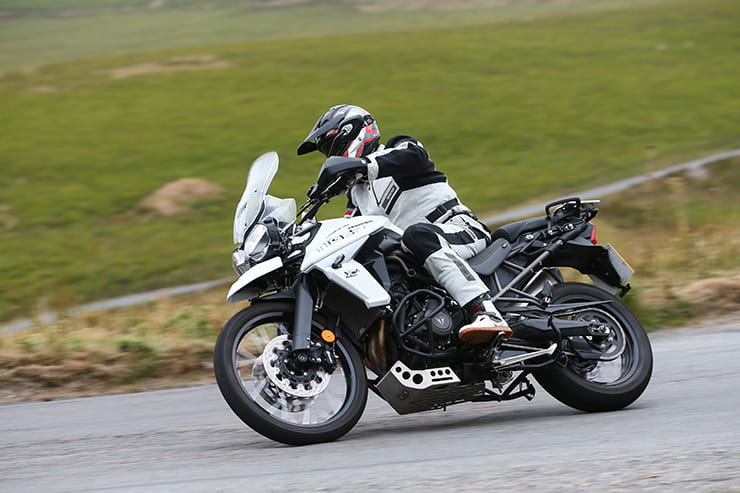 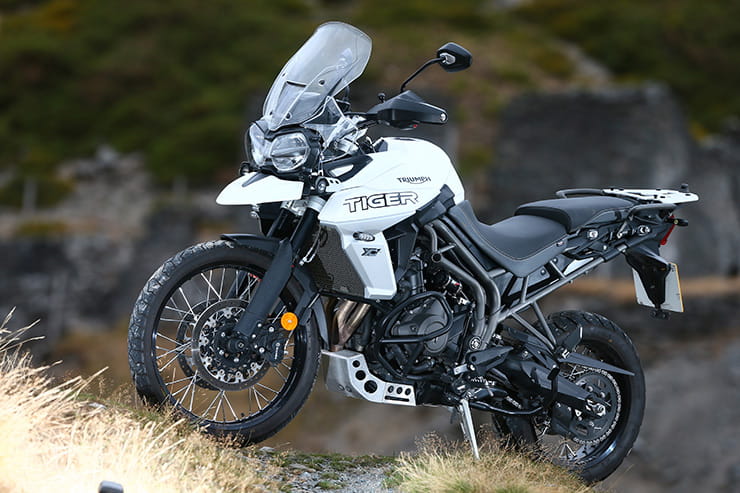 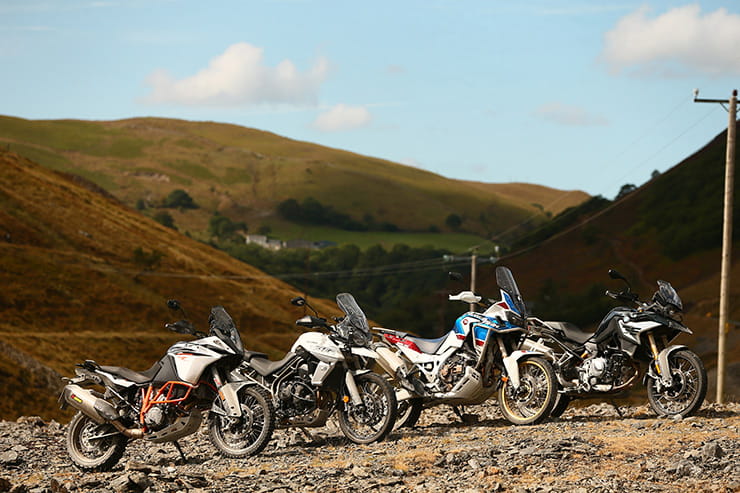 New clocks, six-mode TC electronics, tweaked riding position and engine response for 2018, the Tiger 800 XCa is the most off-road of the 800 Tigers and comes with a long list of extras including wire wheels, bash plate, hand guards, heated seats and grips, cruise control, centrestand and adjustable screen – all designed to make life as comfortable off the road as on it.

The Triumph Tiger 800 range hosts six models; the XR range is those with more of a road focus hence the cast wheels with the XR starting from £9,100, while the XC range has the wire-spoke wheels among its differences, and it sets off from £11,250. We were testing the XCa model which is available from £12,450 otr and is available in three colours: Korosi Red, Marine and this…Crystal White.

Potential Tiger 800 owners comparing the Triumph to parallel twin rivals from Honda and BMW will note this is less torque than the Africa Twin or F850GS. That’s because smaller engines are less torquey, and the 800cc triple is 53cc smaller than the Beemer and 198cc down on the Honda. So, in order to achieve the same equivalent peak power as them, the Triumph is tuned to rev harder (because power = torque x revs/5252). It peaks at 9500rpm, 2000rpm higher than the Honda and 1250rpm up on the BMW. 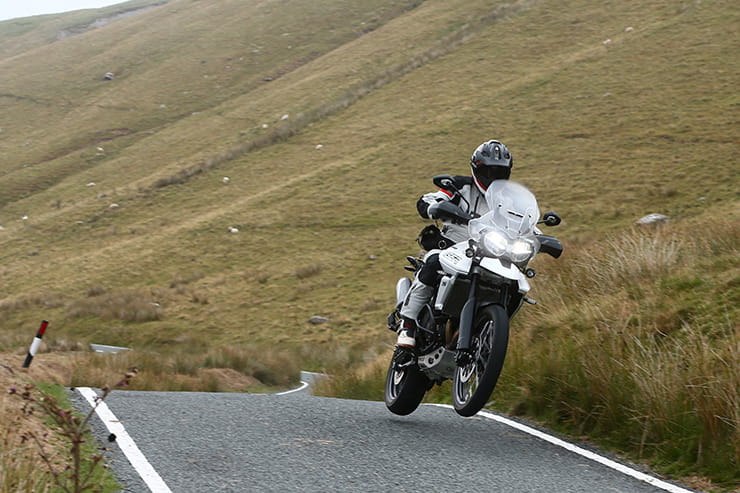 And the above is why the Tiger feels the way it feels: it’s a peakier, revvier top-end rush than its competitors and delivers less chuggable, thumping bottom-end punch. On the road this doesn’t matter so much – if you’re cool with the conventional power delivery of an inline multi, on tarmac the Tiger’s smooth climb up its three-cylinder rev range is a high-spinning pleasure and its relative lack of low-down shove isn’t missed. You just stomp on the lever and keep it on the boil. Or on the motorway, when you just want to ignore an engine and focus on staying awake, the inline triple is less thudingly intrusive than a twin.

It won’t snap out of corners like a twin; the Tiger howls out of them instead – although with its extremely loud gear-drive whine overcoming even the new, supposedly louder, exhaust note, when you cane the triple it’s strangely reminiscent of the straight-cut gear transmission whistle inside a rally car (this might be something to do with the engine changes for 2018 – thanks to low-down fuelling improvements, Triumph have been able to shave inertial damping mass from the drivetrain; specifically lightening the crank and flywheel, and removing backlash gears from the balancer drive and transmission. It ought to make the engine mechanically quieter, but this one sounds like it’s got Colin McRae’s nuts trapped under the tank).

But the flipside of this comparative top-endiness means the Tiger motor isn’t as tractable off-road as a parallel twin or V-twin. It’s an engine designed and tuned to operate as a conventional road-going motor rather then a mud-plugger. On road-biased dual-purpose tyres, when you want it to just keep plodding forward up some slime-infested hillside on tickover, the Tiger will often spin up or even just stall – despite its choice of two off-road riding modes (one of which reduces ABS and TC, the other cuts them completely). 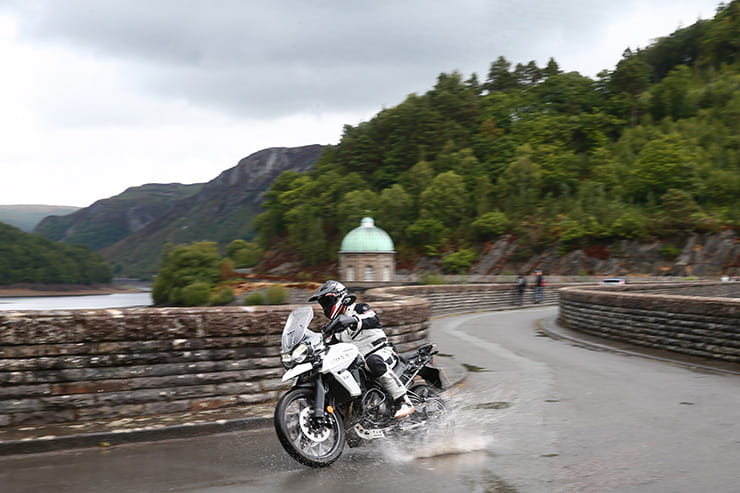 A strange beast; at worst, ridden like an ass, the Tiger drains its tank low enough to send the rider scuttling for a filling station in as few as 140 miles. But when the rider’s feeling less throttle-happy – which isn’t often, to be fair – the Tiger stretches it out to over 180 miles. That’s a big difference, but as well as clumsy throttle use it might be also down to our efficiency topping the tank – with a centrestand as standard on the XCa, you have the option of squeezing a bit more in with the bike upright. Having said that, the Tiger’s not the easiest bike to haul onto its stand, so it’s not always worth the bother.
Of course, all conversations about tank range could be rendered irrelevant if the Tiger had an African twin-sized 25-litre tank – but the engine’s relative height (it’s tall) means there’s no easy way to balance all that weight even higher; that would require a new design of compact powerplant. Cue the next generation Hinckley triple, surely coming to an adventure bike near you within the next few years. But not yet, so we all have to ride more frugally.

Triumph is always keen to emphasise what it considers a default Hinckley characteristic, whether you’re riding a Rocket III or a Daytona 675 (I nearly said 765 and gave the game away then) – they all have neutral handling and suspension balance; steering is always agile and vice-free yet stable, springs are always set-up with a poise and parity between front and rear. Now, you might think this is a given, but there are plenty of new bikes that steer like overloaded busses, some that bounce around on over-soft springs and some that chop about like a startled butcher.
The Tiger, on semi-adjustable WP suspension forks and semi-adjustable WP rear purchased at great cost, no doubt, from owners KTM, is another great-handling Triumph. On its Bridgestone Battle Wings it quickly builds fantastic confidence on the road, without the dramatic rear-to-front weight transfer on the brakes that can upset adventure-style bikes and leave the front end feeling vague, ready to wash out as you turn in. There’s no wishy-washiness here. Peg-scraping angles are a few enthusiastic corners away, and pinning the gas on exits has the rear digging in like a truffle hog. You can get away with murder.
Triumph claim 229kg wet through for the Tiger 800, which is about right for the class – it’s no fly-weight and bikes like KTM’s 1090 R, which is supposed to be the same weight, somehow feels lighter.
But again, it’s that road bias – who wants an over-light adventure bike you’re thinking of taking long distance? You want the confidence of solidity, allied to easy handling. And that’s what the Tiger delivers. 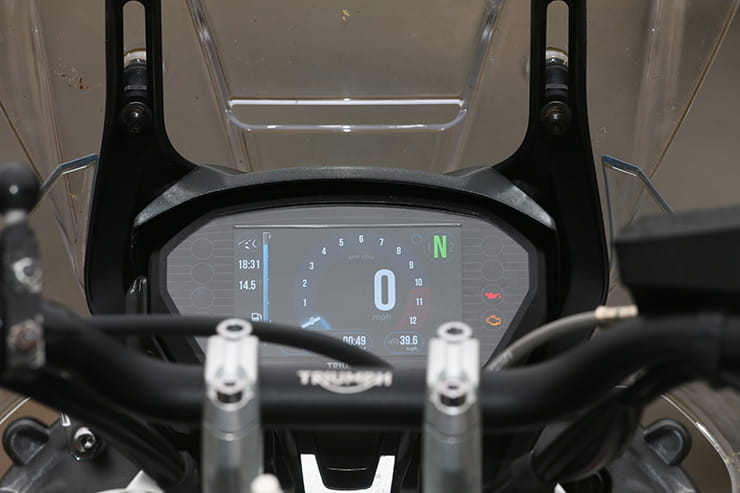 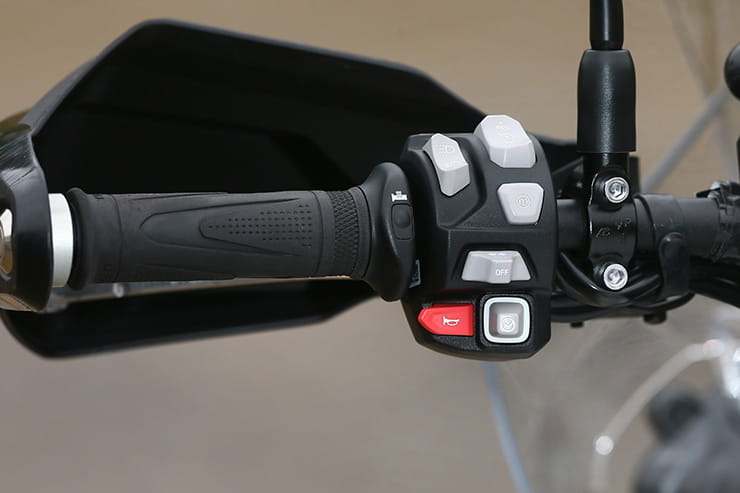 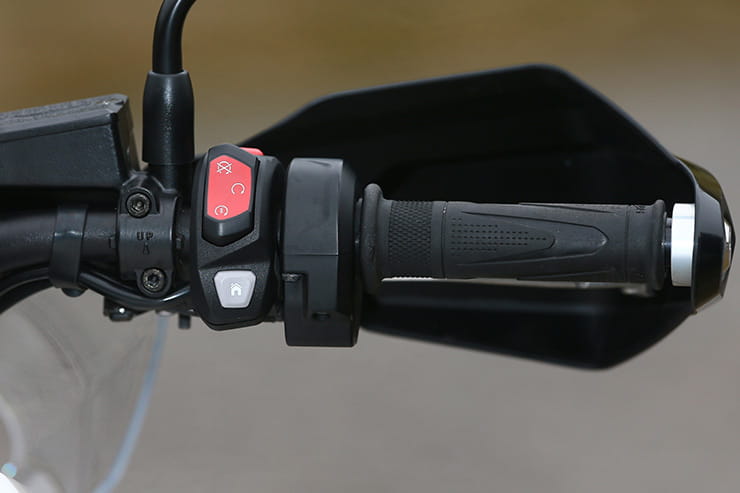 In a change over the 2017 Tiger 800’s Nissin calipers, the 2018 Tiger 800 gets a pair of Brembos instead – still only two-pot sliding, not opposed four pots; but then on a skinny 21-in front it’d be easy to overwhelm the tyre. As it is, the Tiger stops superbly, burying its nose the required amount.

This is where the Tiger 800 shows a clean pair of ergonomic heels to rivals. Seat height is lowest in class, so it’s the most manageable (especially compared to the lofty, alienating Africa Twin). The seat is also wide and supportive (not always a Tiger 800 strong point; the first incarnation of the bike was like riding on a sponge), adjustable from 840mm to 860mm. The pegs – great big off-road aluminium things – are low so there are many acres of leg room. The bars are set back by 10mm for 2018, which drops them more into the rider’s lap. And the new screen is five-way adjustable (simple but effective spring-loaded mechanism) and works very well with, with added side deflectors meaning hardly any buffeting of head or shoulders. Just how much effort Triumph have put into the screen alone can be seen comparing it the perspex afterthoughts of the F850 GS, Africa Twin and KTM 1090.

Proof of the Tiger’s sound ergonomics comes after a 200-mile ride – if you’re on the KTM 1090 R, BMW F850 GS or Africa Twin, you’ll be stretching, lifting a cheek off, generally fidgeting a bit. Not on the Tiger. 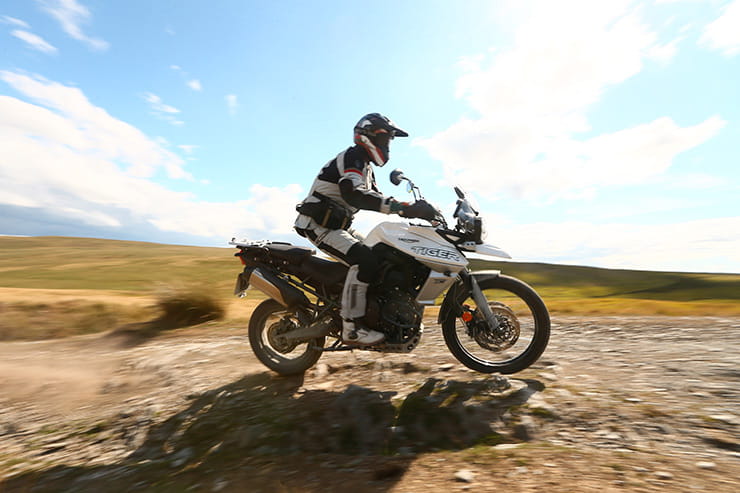 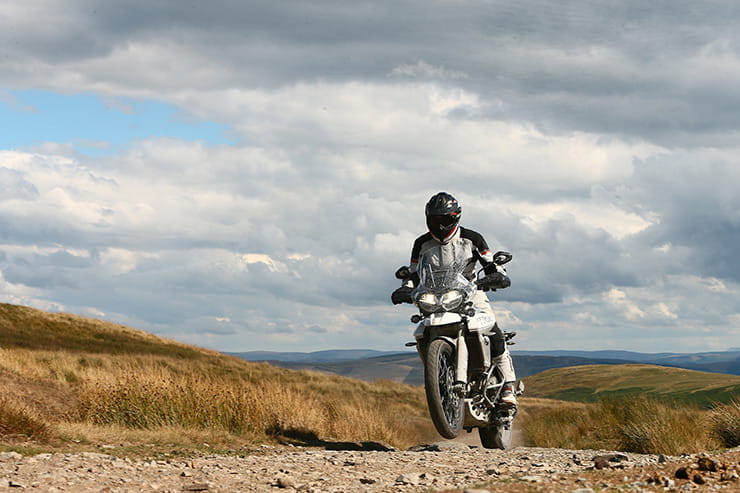 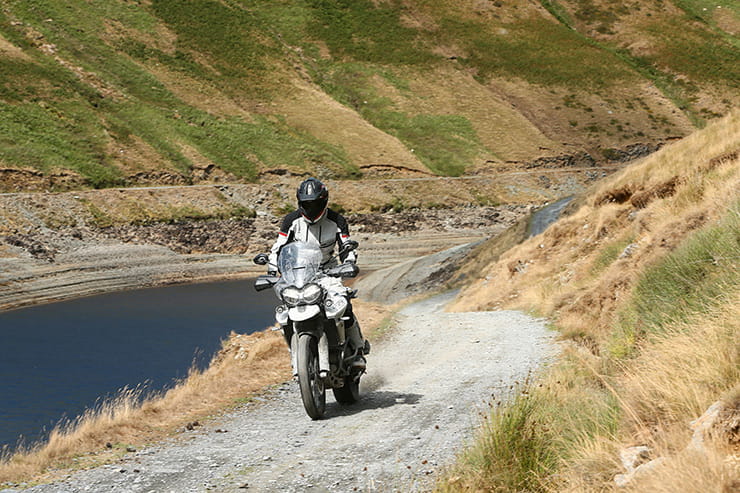 It’s a win. The XCa is the top of the Tiger line, and comes with a long list of goodies. First up is the new-for-2018 5in TFT dash, adjustable for angle to stop glare. It also has six different display configurations and auto contrast sensing. And it looks classy. The motor has six different rider modes: straight road (road), wiggly road (sport), a rain cloud (wet), a helmet (custom) and mountains and really big mountains (two off-road modes). Swapping between them can be either by button or a little joystick, which also navigates various trip and settings options. There’s a lot to be playing with.

But ride the Triumph at night and you’ll notice the full LED lights, but especially the backlit switchgear, which is so useful it’s bewildering it wasn’t standard 20 years ago. And in the chilly bits you note the heated grips. And a heated rider and pillion seat. And then a centrestand. And cruise control. And a USB socket as well as  12v socket – which has enough juice to run a heated jacket (eh, BMW?).

It is, however, more than 7% better. Work that one out. 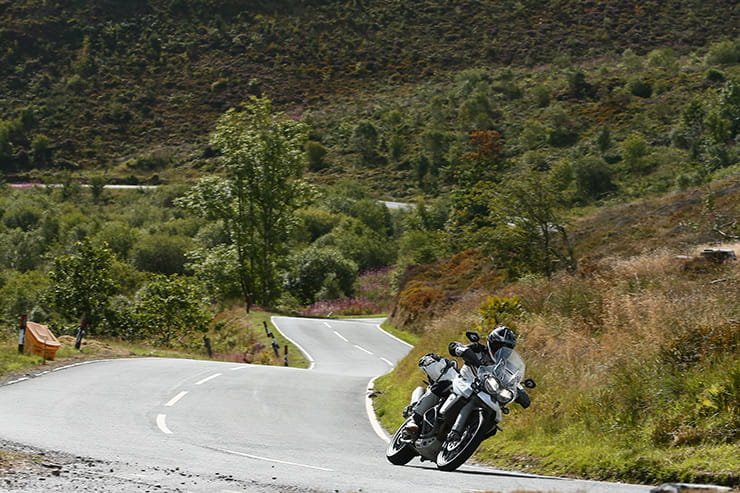 Three things I loved about the Tiger 800 XCa

• tank range could be better

• er... the pillion footpegs are naff 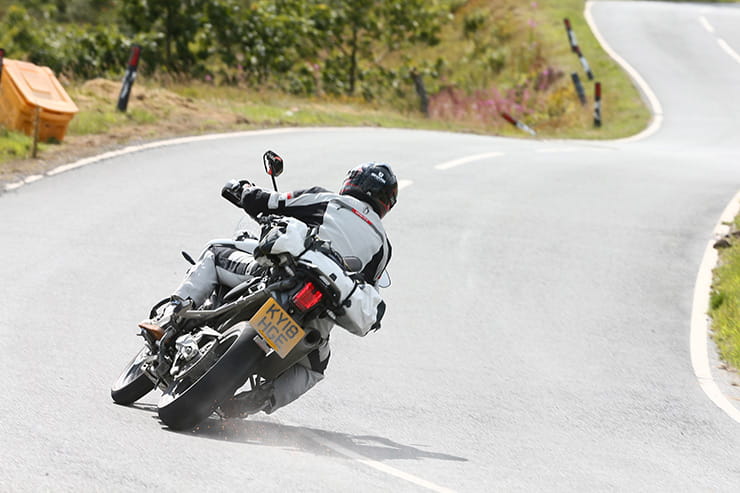