The legacy continues as Triumph has updated its ever-popular Speed Triple for 2016 with wholesale changes to the outgoing standard spec bike and the R model. However, the higher-spec and sportier R is not to be the KTM 1290 SuperDuke, BMW S1000R and Aprilia Tuono V4 1100 RR challenger we may have expected as the growth in both popularity and power within the supernaked class continues.

The Speed Triple is the bike that put Hinckley Triumph on the map twenty-two years ago and showed the Italians at Ducati that although they called their naked a Monster, this British beast really was a bit of an animal. Like the new Triumph, the 2016 Monster 1200 R equally doesn’t compete with the sheer lunacy of the other 165bhp+ street fighting super-nakeds but what it does do particularly well is offer the smoothest three-cylinder experience currently on offer. There’s plenty of torque and enough grunt to thrill, particularly in the mid-range, while still proving to be a good-looking, rider-friendly bike fit to cover pretty much all riding purposes. 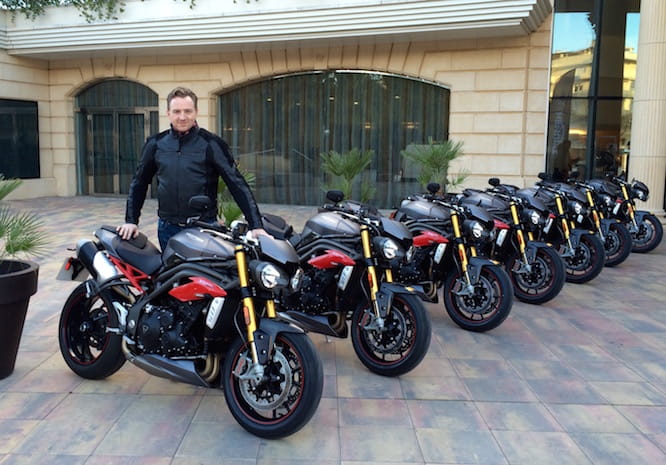 Therein lies a divide in this class and what Triumph have done is produced a more aggressive-looking machine that resonates with the meaner looking original from ’94. It offers riders a complete package of style, power, technology and rideability instead of concentrating on supplying masses of bhp while compromising elsewhere. A nod in the direction of both the existing customer base and target audience.

Bike Social was invited to the Southern Spanish coast to the world riding launch of the Speed Triple R to cover 95 miles of fast, sweeping, scenery-laden mountain passes mixed with some dual carriageway. Then in the afternoon the assembled journalists had the opportunity to stretch the Rs legs and scrutinize its performance on the technical Calafat circuit.

The updates for 2016 focus on the Speed Triple’s cosmetics and engine, largely leaving the chassis alone. The frame was entirely new for the bike’s last revamp in 2011, and while it isn’t getting a big change for 2016, it’s the hypersmooth engine with 104 new developments which Triumph claim offer more power (up by 3 to 138bhp), torque (up 7% to 82.6 ft lbs.) and responsiveness (the introduction of a ride-by-wire throttle is a god-send).

Speed Triple S uses 43mm upside-down Showa forks that are adjustable for preload, compression and rebound damping. Then at the rear is a Showa monoshock. Meanwhile, the R model opts for top-spec Ohlins; 43mm upside down NIX30 Ohlins to be precise while at the rear is an Ohlins TTX36 twin tube monoshock, both are fully adjustable for preload, compression and rebound damping. The standard S bike has gained the same Brembo brake calipers as the R to stop the 320mm twin front discs. 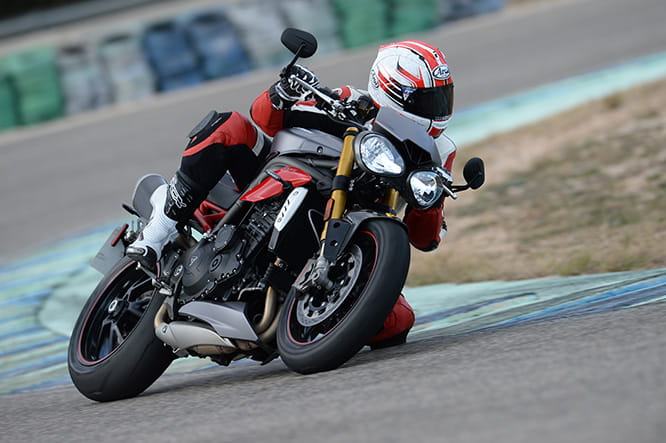 Five rider modes including a track mode, which are selectable while riding with a flick of a handlebar-mounted ‘Mode’ button and a dip of the clutch acting as the confirmation, are a notable addition. As are selectable ABS, selectable traction-control and sharper styling to the seat unit which Triumph say was inspired by the Daytona 675. The rider modes are namely Rain, Road, Sport, Personal and Track, and each varied throttle mapping, traction control settings, ABS level. All provide the same standard 138bhp although the bike resets back to the standard Road mode each time the ignition is turned off. Worth remembering on a wet day or track day for example!

Swing a leg over the Speed Triple for the first time and you’ll immediately notice the narrower seat unit, well narrower at the front where it meets the fuel tank, which is all part of the ergonomically redesigned slimmer profile of the bike. Against its closest rivals (see the below chart), the Speed Triple remains the tallest in terms of its seat height but we’re talking a matter of 15mm versus the Ducati Monster 1200 S. And just like the Ducati, the steering lock is at best average so don’t go attempting tight turns at low speed.

Pulling the clutch lever in is still required to fire up the three-cylinder 1050cc engine via the rocker-style ignition switch. It purrs into life with a recognisably soft rasp that you know is hiding plenty of torque at anything other than tickover. And you wont be disappointed. The new lightweight and adjustable clutch lever offers the first hint at an overall friendlier and smoother experience, with its ease of release. The new ride-by-wire throttle immediately has you under its spell - there’s nothing snatchy about this refined gent of a bike as you listen for the triple to seduce you with its signature tune through the twin underseat exhausts. 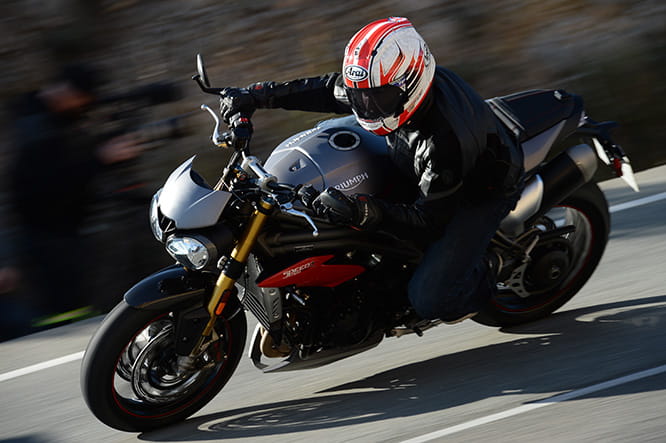 *BMW, Aprilia and KTM are certainly sportier by nature and offer more in terms of power though their price tags reflect that.

Those 104 component changes in the engine include a new crankshaft, new piston design, a new ECU and a new airbox all add to significantly improved engine performance. It feels lively and responsive but in a controlled manner, rather than leaping about like a new puppy, the Speed Triple goes about its business far more gracefully. Predictable behaviour in this scenario does not mean its dull, far from it becasuse the bike builds rider confidence each time you pull away, change gear or negotiate a corner. Flick into Sport mode and crack open the throttle yet you still won’t be thrown back in the saddle with any energetic wrist movements, yet you notice that plenty of ground is covered quickly. There’s still more torque from less power than both the Suzuki GSX-S1000 and Kawasaki’s Z1000 so much so that going for a mid-gear overtake hardly requires dropping down a gear except if you’ve not had your aural fix of the triple’s tune.

The red line is at 10,000rpm and the multiple blue flashy shift lights above the rev counter will give you the heads-up as you close in on maxing out the power band…if you can’t feel the drop off yourself of course. The lights are adjustable if need be but the speed at which the 138 horses are thrown into action is impressive and the bike accelerates hard and fast to accompany the howl. It’s alert enough to feel like there’s more power than is claimed and the needle charges through the revs towards that limit with ease. The lower gears are relatively long so you’re not forever changing up or down around town. 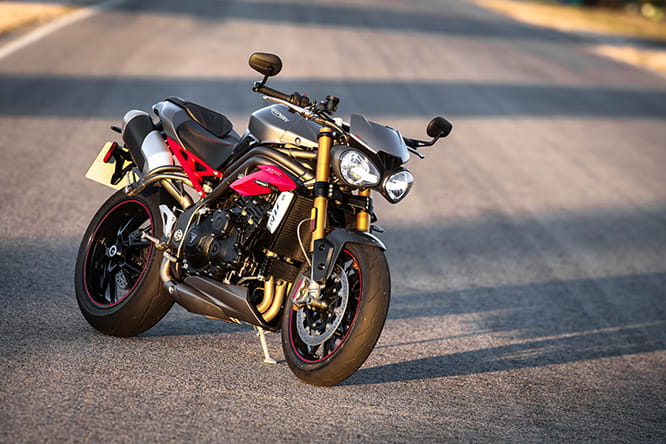 Mid-range toque, around 5750rpm, is up as much as 5% against the outgoing model while the 2016 ‘R’ reaches its peak of 82.6 ft lbs at 7850rpm, around 200 later than before which makes pulling out of 2nd or 3rd gear corners a doddle. Open the throttle and let the electronics, high spec Pirelli’s, nifty suspension and that tidy unchanged chassis keep you in check.

Up front the fly screen has an integrated intake duct and twin re-designed headlamps equipped with Daytime Running Lights. The screen does the bare minimum of offering wind protection and after not many motorway miles I could feel my arms begin to ache. Fine so it’s not designed to gobble up the big miles like a tourer but if your commute includes this kind of riding then test ride it first, or just opt for the fly screen visor upgrade. Equally, while there is a pillion seat and pegs, unless you’re carrying a very small or nimble person, then be kind add a grab rail to your shopping basket too.

The restyled and narrower seat has more cushioning apparently and after a day in the saddle I’d be happy to do exactly the same tomorrow without any concern of being uncomfortable. The standover, raised bars and footpeg positioning compliment each other well enough to warrant no stretchy leg moments mainly because the riding position makes you feel part of the bike, sitting in rather than on. This is also handy when on track and using your forearms against the fuel tank.

One interesting detail is the use of bar-end-mounted mirrors, much like those seen on Honda’s RC213V-S. The teardrop-shaped makes them very useful and they’re easy to adjust too via a mid-rear mount though watch out for mirror movement at high speed or the slightest knock.

The engine revisions and emission legislation compatibility have benefitted the Speed Triple’s economy too. While the fuel tank capacity has dropped to 15.5 litres, Triumph say the bike is more economical. The technical specification claims 52mpg, however at the end of the road section of the press launch the display indicated a return of 43.9mpg, though realistically this would reflect its minimum mpg given the enthusiasm with which bikes are tested on these launches. That said, its also worth noting the fuel range according to the display is a mere 110 miles from full, though Triumph's technical staff told me the on board computer estimates an approximate range based on previous riding. Therefore, ride like a madman and you'll get 110 miles down the road, mix up your throttle agression and there's more mileage on offer. 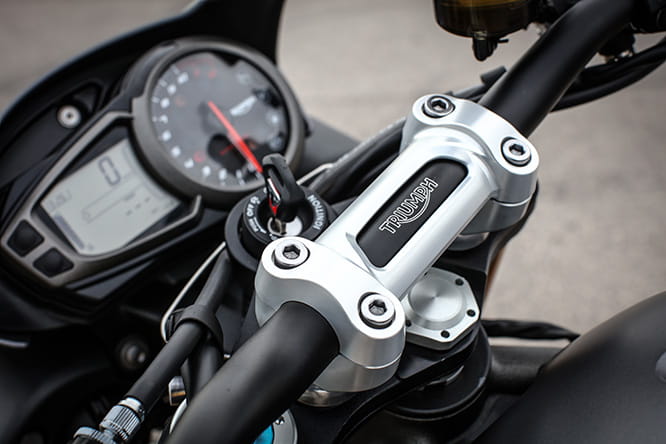 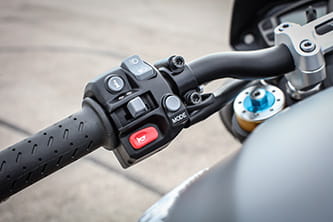 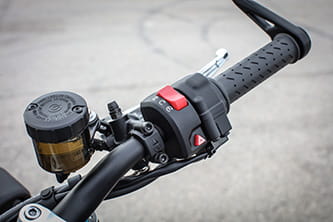 While the Speed Triple isn’t going to be the preferred choice by many at your local track day, the Hinckley men have designed a bike with an ‘R’ and of course need to substantiate its ability when equipping it with fully adjustable Ohlins suspension, Brembo brakes and Pirelli Diablo Supercorsa SP’s.

Off to the twisty, rugged and rather crude 2-mile long Circuito Calafat we went - a stone’s throw from the Balearic Sea and some 90 miles West of Barcelona for three 15-minute sessions.

A pair of tyre warmers and a quick fiddle with the rebound and compression-adjustable Ohlins doesn’t offer a true reflection of everyday use but for the benefit of putting the R through its more sporty paces and in order to discover how good its specification is, these additions and adjustments were more than welcome.

As rough as the surface is and as bumpy and grip-free as the rumble strips are, the contours of the circuit plus its abundance of 2nd/3rd gear corners actually showed the Speed Triple’s capabilities. Its 212kg (wet) weight meant there'd be no need for any 'arm days' at the gym until next week but once again the Triumph worked remarkably well. In Track mode the throttle mapping becomes more responsive while the traction control and ABS unintrusive but the main point here is how balanced and stable the bike is.

The Brembo’s were squeakily begging for mercy after three track sessions but the bike had been ridden hard. Thankfully the twin 320mm discs on the front were particularly reliable into a downhill, 2nd gear, right-handed open hairpin at the end of the 5th gear start/finish straight. The ABS only wanted to interrupt the very hardest of brakers and the bike felt very well balanced banked over in the helpfully cambered corners. Even turning while still on the brakes, 'trailbraking' as the racers would call it, wasn’t enough to ruffle any feathers, it’s as if the bike offered a reassuring, “hey, no problem, I’ve got you”. 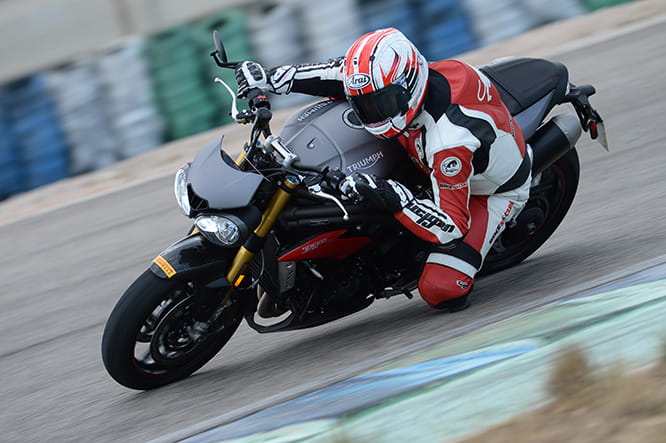 Overall, this is a hugely accomplished motorcycle, taking the icon a large leap forwards. Feeling like a proper grown-ups bike, it still hauls and comes dressed with some top equipment making it attractive to riders of all ages. Contemporary with its styling, rider modes and torque curve while credible, iconic and authentic with its history, build quality and refined engineering. Is it worth upgrading if you’re riding around on a 2015 model? That’s a tough call but even before I’d even ridden the new bike, a Triumph test rider said to me “the difference between the two is like night and day”. After a day on the 2016 ‘R’ I don’t necessarily agree. Certainly, there’s plenty of differences for the better but when so many components including the chassis are the same, maybe we can put the difference down to sunset and day instead. 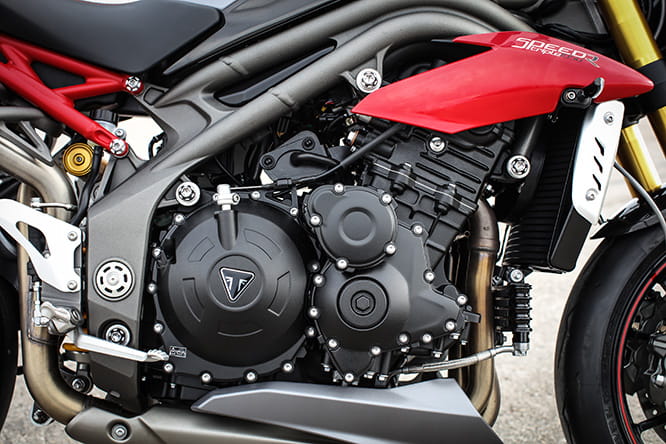 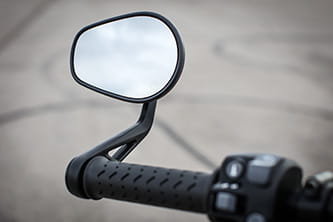 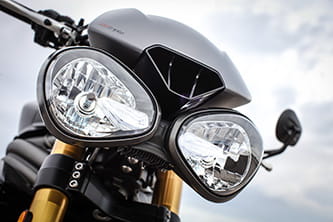