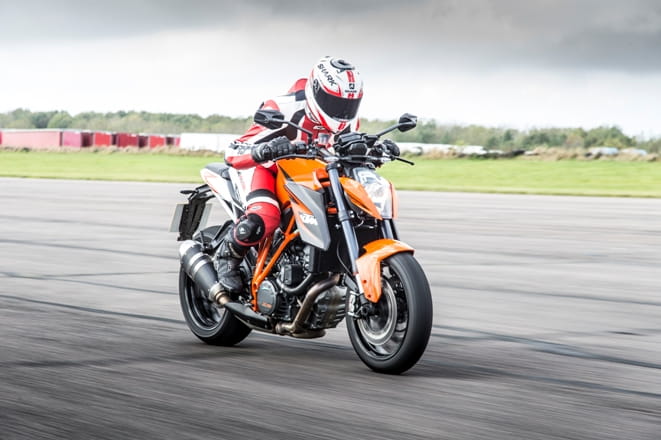 We all look at supermodels in magazines, on TV and on bus stop posters and admire their beauty. I’ve not been up-close to many of them; supermodels not bus stops you understand, nor have I ever woken up with one but it’s safe to imagine that behind the make-up and Photoshop operator they’re not as flawless as we might think.

They don’t have to be flawless every day because they have other uses aside from strutting up and down a catwalk or being moody in front of a camera. The same can be said for KTM’s naked powerhouse, more commonly known as the 1290 Super Duke R. Famed for its power but it does have other uses.

The Claudia Schiffer’s, Cindy Crawford’s and Heidi Klum’s of this world earn their dollars off the back of what they are famous for but are all mothers, businesswomen and do a great deal of charity work. The KTM meanwhile is the Naomi Campbell of the bunch. Mean, powerful and not to be miss-treated when agitated in an unfamiliar environment. 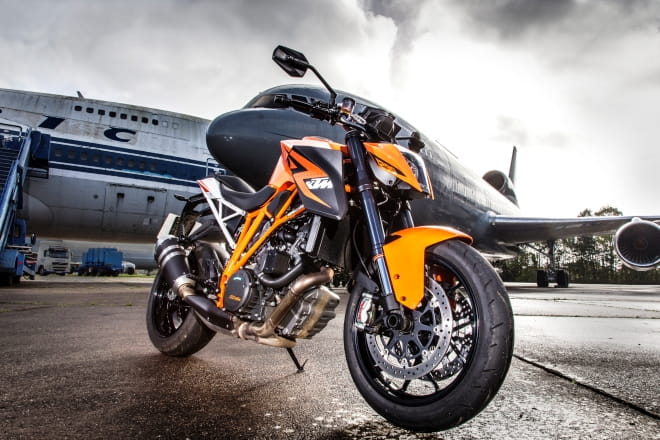 When KTM removed the covers and shackles this time last year, the motorcycling world all gasped as one before scrambling to get a ride on the 177bhp machine which KTM had already awarded its nickname of ‘The Beast’. Primarily because of its vast amount of torque but this bike has much more about it than its swathes of power, it also has uses away from its ability to almost pull arms from sockets.

Despite the ‘1290’ name, this V-Twin comes packed with 1301cc of meaty goodness and with Kawasaki’s recent supercharger revelations the trip from 30 – 70mph with an open throttle certainly feels like the KTM has its own supercharger. It is epically quick but also as nimble as a ballerina, narrow and handy in everyday situations. As a commuter machine equipped with a fist full of go you’ll be hard pushed to find anything more suitable; it’s comfortable, easy to use, the four-pot Brembo callipers hang onto the 320mm front discs admirably, they are super sharp. The bikes’ suspension is soft enough to soak up the bumps yet hard enough to give you a stable and trustworthy feeling in the quicker bends. The KTM is quick to turn too, the standard Dunlop Sportsmart’s will give every non-professional rider the confidence to push the front especially with the admirable WP upside down front forks and single monoshock at the rear.

The slipper clutch, or PASC anti-hop clutch as KTM call it, works a treat and allows for a lighter touch on the clutch lever…when you use it. 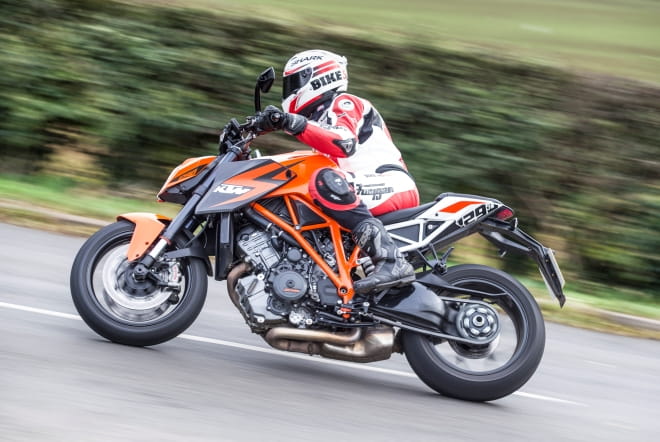 The instrument panel is made up of an analogue rev counter combined with a digital display. The rev counter is numbered to 12,000rpm with no red line which fools you into thinking you can rev the hell out of it, that is until a red light distracts you at 9,000rpm. You'll still get to 9,800rpm before loosing power.

The easy-to-read digital part shows mph, time, mode, gear selection (very happy about this), fuel and temperature. To the left is where the main menu is displayed complete with mode settings (Rain, Street or Sport), traction control, supermoto setting, odometer, battery charge, fuel range and trip settings. All of which is easily operational from the four-way buttons on the left-side handlebar. In true man-style, I read no instructions yet found the system easy to understand and operate.

Take a look at our brief video edit of the KTM on a private runway:

Despite all of its torque and power, the electronic wizardry will stop you from wheelie-ing or loosing traction but a few taps of those buttons and you’ll turn into a paparazzo faced with an angry Naomi Campbell. It will unleash hell and you’d better be holding on, it’s called ‘The Beast’ for a reason. Just to clarify that’s the KTM, not Ms Campbell.

Rain mode is becoming common place on many newer models and can be seen by some as the wimps way out, perhaps a little less macho but rest assured that the KTM's version is admirable. Very sensible in tricky conditions and offered a safer, calmer feeling. The power is restricted to 100bhp and delivered more smoothly while the Sport and Street modes use all the available horses. 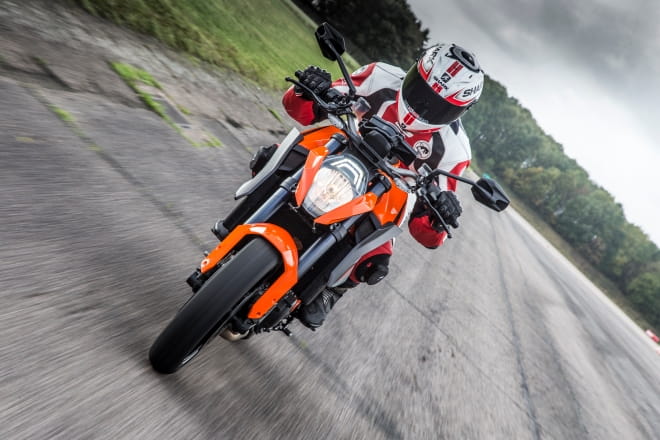 On test we managed to eek around 170 miles out of the 18 litre tank at 44mpg despite the digital display assuring you there was 220 miles in the tank when you filled up. The claimed 159mph top speed was obliterated during a high speed run on a private runway when we recorded an indicated 173mph. There was more in it too but we ran out of runway.

On paper the Super Duke has competition in the shape of the Ducati Monster 1200S, BMW’s S1000R and the Tuono from Aprilia, for example. But in reality none of these bikes are that similar to the KTM. It is, as the Austrians would have you believe, unrivalled. The Ducati for one is not a 177bhp mentalist, it still packs a punch but the subtle differences such as the way in which the power is delivered and the kind of ride you should expect are what make it unfair to be pitched head-to-head. The Monster has its own character, an individual exhaust note and the Ducati marque behind it for a bit of added brand snobbery. Plus it's £1,000 less than the KTM.

How about the bad bits? Our press bike had covered 5,500 miles but the front disc was warped and having spoken to another Super Duke owner he too complained of the same symptom and we agreed that it was only noticeable at speeds so low the wheels was only just turning. The electronic options programmable by the rider via the instrument panel are re-set each time the ignition is cut which can be time consuming if you want to re-set after a fuel stop or a quick chat to your mate with the engine off. 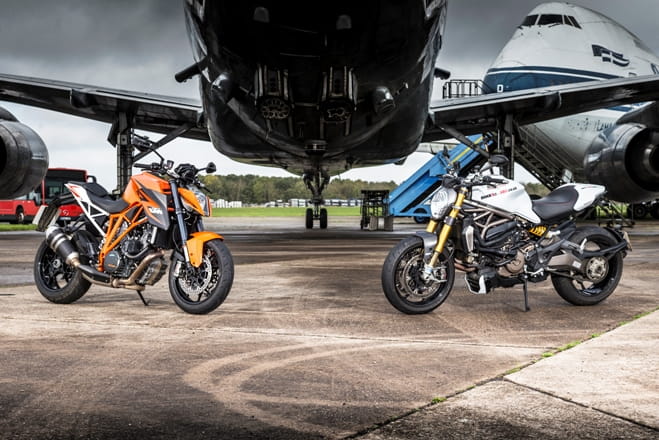 Overall, the orange and white fairings and frame give the bike a distinctive look (there’s also a black and orange option) and the KTM offers a distinctive ride. We ran the bike for two weeks and every day I felt like I was 10 years old and it was Christmas Day, I couldn’t wait to get on it again. A white van man at the petrol station said “nice bike, mate”, I thanked him and agreed with him, I was proud to ride it. It kept me interested and has much more use than it would first appear much like your everyday supermodel. 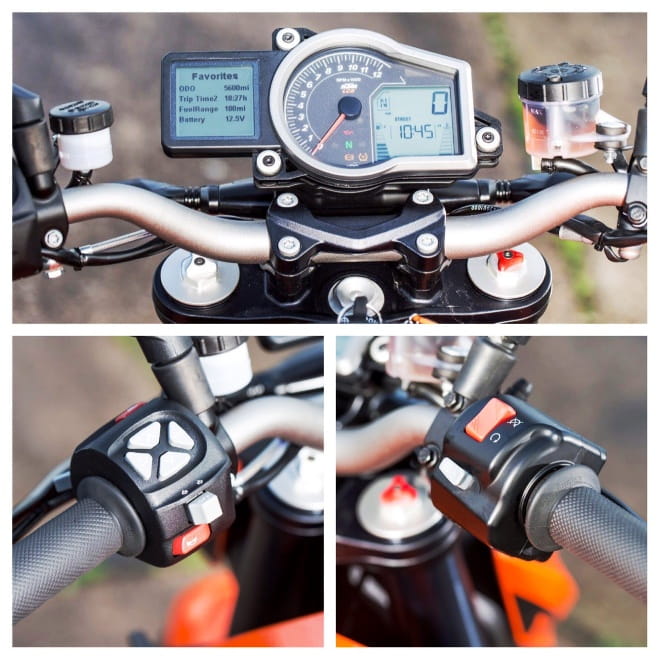 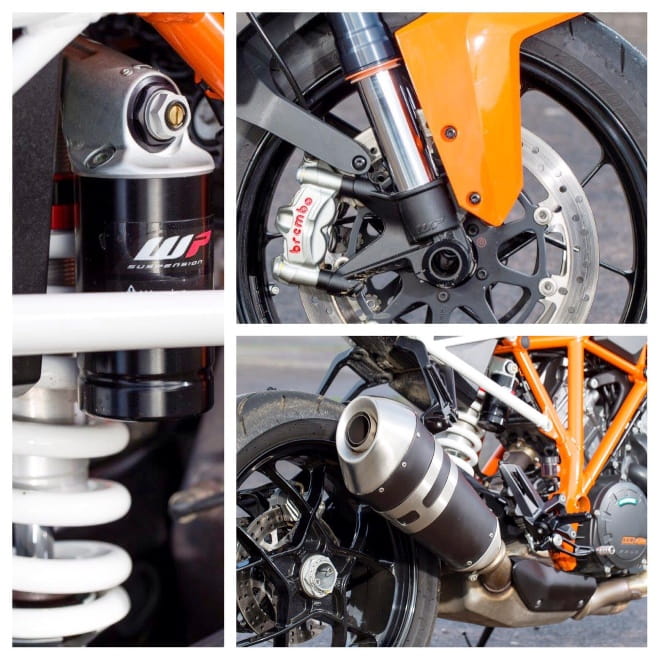 Have you ridden KTM's 1290 Super Duke R? If you'd like to leave a commment here then  or !