Waking up after a highly successful first date and you get that giddy feeling. You had an awesome time and all you really want to do is see her or him again. Right after some obligatory Facebook stalking and the too-soon-text of course.

A week later and after a highly successful second date, you’re engrossed. The next date is planned for the following day and soon you’re a proper couple spending everyday together, forgetting your friends and family whilst romance blossoms.

This is what owning Aprilia's new-for-2015 Tuono V4 1100 RR is like; addictive. I had the bike on loan for a week and covered 450 miles in the process but all I wanted to do is find an excuse to go for another ride, like the proverbial kid at Christmas. From the outset I was besotted and actually dribbled in my helmet the first time I tapped into the Italian beauty's 175bhp (at 11,000rpm) on the B-roads around The Fens. 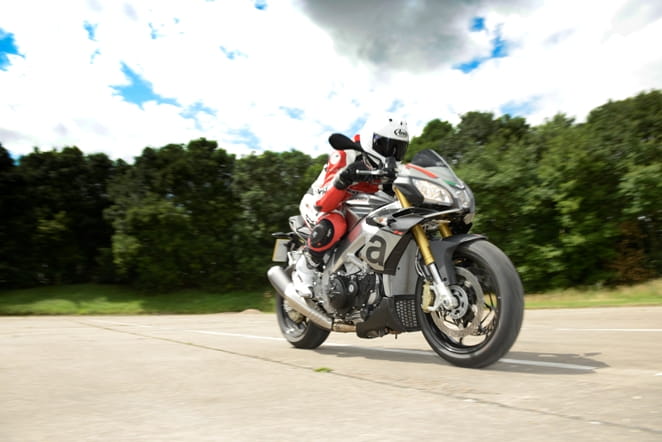 The hyper naked Aprilia has full-on sports bike-like performance thanks to its 65-degree V4 engine. It's been developed from its 2011 predecessor, the V4R, from 999cc to 1077cc resulting in an extra 5bhp. According to Aprilia, an additional 20bhp at 8000rpm adds to the revisions which make the bike more useable with increased and smoother torque at low to mid-range.

The frighteningly fast throttle response offers brutal amounts of power available at the lowest of revs, more than you’ll ever need on the public roads. The senses are given a real treat with the V4 barking merrily through the standard single-side exhaust. It’s fitted with a butterfly valve which allows the Tuono to meet noise regulations while maintaining its hallowed growl. It sounds incredible and the standard-fit quick shift box gives a split-second MotoGP style change, which is not only accurate and sharp, it's just as pleasing on the ear.

Akrapovic offer both a slip-on and full system as options for the Aprilia. The mind boggles at how that might sound. 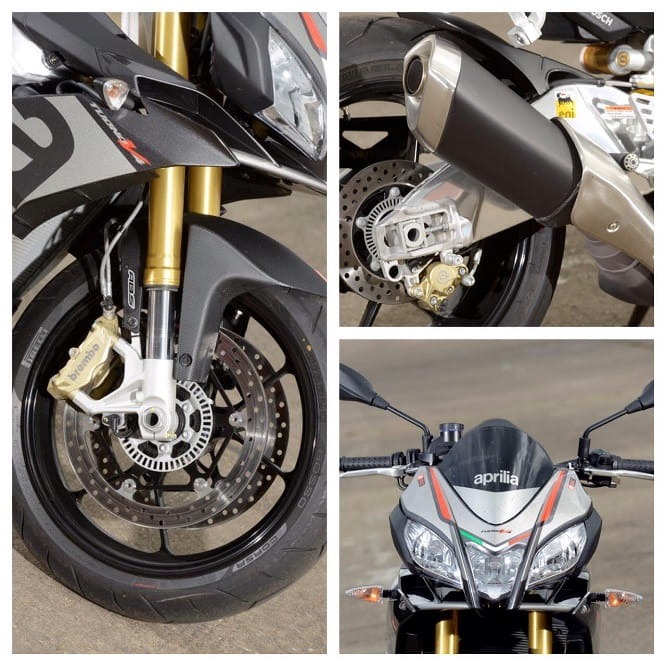 The downside to such a sensitive throttle is the Tuono's inability to travel comfortably at speeds of 30mph or less. Like a caged animal, it just wants to be let loose. In either 2nd or 3rd gear, every millimetre of throttle position adjustment provides an accentuated jerk. Noticeably aggressive when closing the throttle at low speed, although it could be argued this enhanced ‘engine braking’ is an additional safety feature.

Maximum revs and therefore the factory-set limiter is 12,000rpm despite no red line. There is an option via the on-board menu of manually setting a gearshift waning light to a position of your choice. That’s all very well when running the bike in before its first service but I simply set at maximum and used my audible intelligence to judge when to change gear, you don’t need a distraction when you’ve got that awesome sound to listen to and a whole heap of performance directly linked to your right hand.

Speaking of the limiter, when performance testing at Bruntingthorpe Proving Ground, the top speed in 6th gear is limited to an indicated 164mph. I know this because the electronic dash records the bike’s top speed which is available for anyone, even Police Officers, to see in the menu. That is until it’s manually reset by holding in the ‘Menu’ button on the left handlebar. 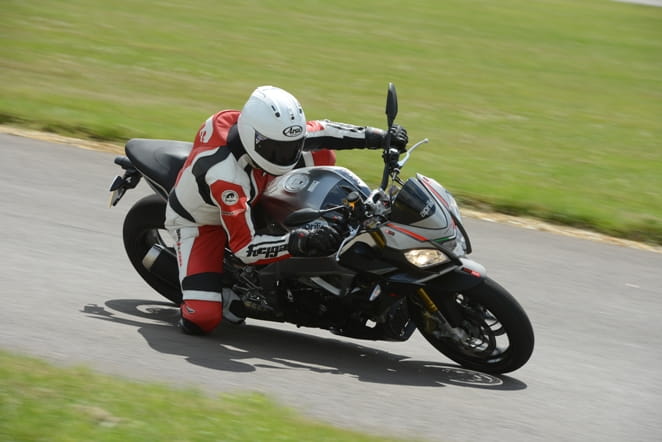 Tweaks to the chassis including a longer swinging arm plus a reduction in weight make it a compact, light and nimble bike, impressively stable at high speeds and precise in the turns. This is ably aided by a set of high quality Pirelli Diablo Rosso Corsa tyres and upside down, fully adjustable Sachs forks. The poor quality road conditions suddenly never felt so good. The ride quality is good, not too soft for the track and not too hard for the road. The front forks can be adjusted for hydraulic compression, rebound damping and spring preload while at the rear, the shock absorber is adjustable in spring preload, compression and rebound. Tailor made for different riding styles, scenarios and rider physiques.

Thankfully, stopping power is equally as potent as its forward momentum and is provided by super sharp Brembo-enabled, ABS-equipped 320mm double discs. ABS can be switched off if required.

Meanwhile, the steering range lock-to-lock is disappointing when manoeuvring into parking spaces or in confined areas but this is the trade-off from such a performance focussed machine. 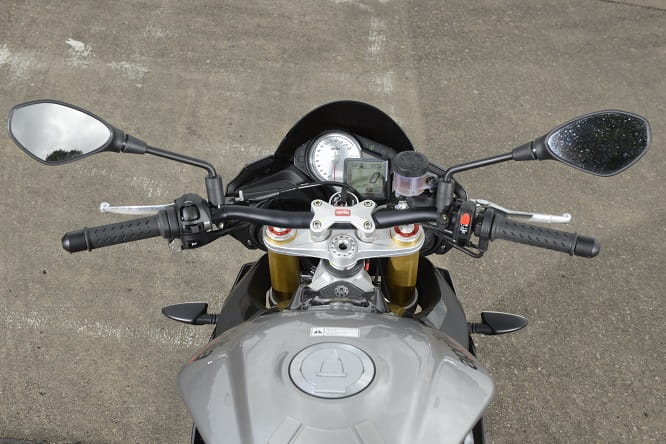 The foot pegs and seat are lower than the sportier RSV4 RF but the Tuono’s higher handlebars and 825mm seat height offer a very accommodating riding position. After covering some 130 miles on one journey there wasn’t a hint of a leg stretch or complaint of saddle discomfort.

While we’re on about comfort, I have an issue with the Tuono being classed as a hyper naked, as Aprilia’s brochure would have you believe. My objection is, while fairly insignificant, as you can see from the photos and if you have any experience with the predecessor then you’ll notice a ½ screen right in front of the instruments. I can also confirm that at the indicated 164mph you don’t feel as though your arms are in danger of being removed from their sockets.

So, for motorway or any distance riding the Aprilia would be the preference to its more naked competitors given its added wind resisting qualities.

The foundations of the hyper naked class can be attributed to the original 2002 Aprilia Tuono Fighter while the latest evolution is a strong rival to two of the best on offer; BMW S1000R and KTM 1290 SuperDuke R, both have no such ½ screen by the way. Priced at £13,135 the Tuono V4 1100 RR sits in between the other two (£11,390 for the Sport version and £13,999 respectively)but is the lightest on offer (claimed 184kg v. 200kg and 189kg dry) and, just like its German and Austrian competitors, has a bag full of torque.

In the mid-range its roll-on ability is epic. At 5500rpm in 6th gear you’d be travelling at 70mph but wrap your right-hand back, blink and the injection of pace suddenly has the dashboard showing three digital figures scurrying upwards as your eyes get wider and wider.

On the road and the Aprilia is a wonderful thing. It feels alive, alert and ready to go, like a lion hunting its prey. Aggressive and often brutal acceleration but smoothly applied while in a lightweight, well-balanced and sharp-focused chassis is quite a task for a manufacturer to achieve. Its power is obvious but Aprilia’s engineers have created a real gem of a bike which is actually easy to ride, so long as you're above 30mph! Even the bar mounted rear-view mirrors are simple to adjust and give an excellent view. 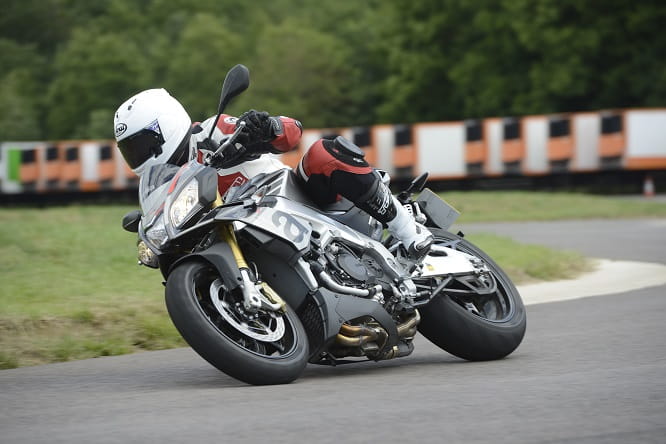 On test the Tuono achieved an indicated economy of 34.5mpg which resulted in approximately 140 miles per 18.5 litre full tank of unleaded.

The 2015 Tuono is not for the faint hearted or inexperienced. It’s the automotive equivalent of a super middleweight boxer; dynamic and agile, it packs one helluva punch yet doesn’t grab the headlines of its sportier sibling, the 201bhp RSV4 RF. Sharp styling and packed full of electronic wizardry, Aprilia have given the world a wonderful motorcycle.

For £1500 extra, the Tuono V4 1100 Factory is the next step up and comes equipped with fully-adjustable Ohlins forks, shock and a steering damper plus Superpole graphics. The RR is available in either Portimao Grey or Donington Blue. 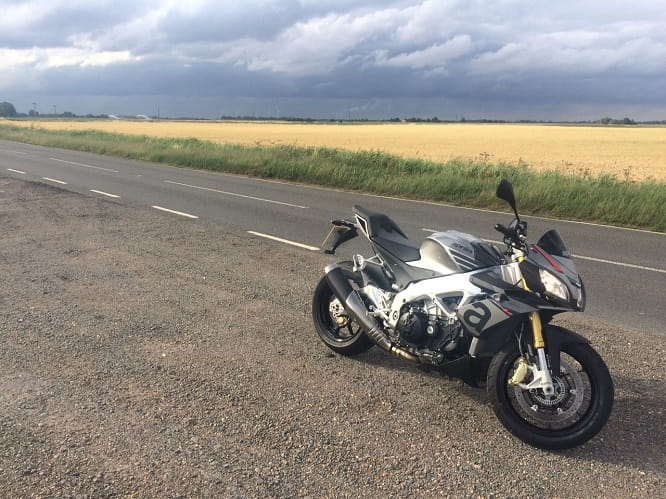 The RR is slightly let down by its lack of cruise control, heated grips and its poor turning circle. It could also have benefitted from semi-active suspension like the BMW but realistically Aprilia have provided an incredible achievement of modern day transportation. As exciting as it is charming.

Go on that first date and if you make it to a second date then marriage is on the cards.