In 1992 Ducati introduced us to a Monster. Pinching the motor from the 900SS, the Bologna firm unleashed the M900 Monster ready for the dealerships at the beginning of ’93 – a premium bike using all the right components to appeal to a style conscious audience. It made 67bhp and weighed 185kg.

Fast forward twenty three years and just last month at the Frankfurt Motor Show, Ducati unveiled the latest and most powerful version of the Monster family, making 160bhp and weighing 180kg. That’s 10% more than the current ‘S’ as well as 5.5% more torque (up to 97 ft-lbs). 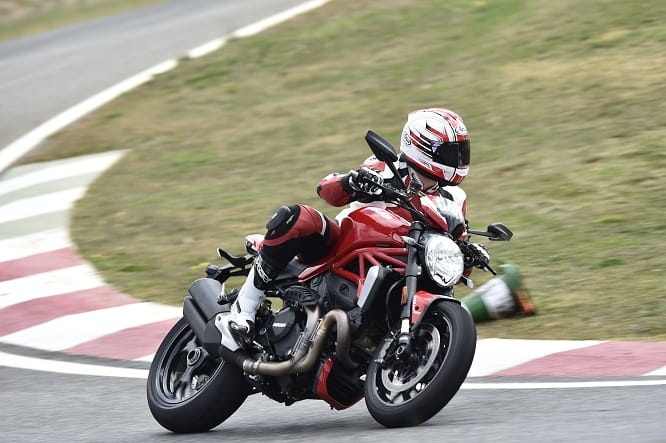 It’s called the Monster 1200 R and we were invited to the International Riding Launch in Spain to be among the first on it.

The R is the 7th member of the current Monster range with three versions of the 821 and a further three 1200’s yet this is the most race-inspired of the lot. International Press Manager, Massimo Davoli spoke of the potential customers for the new bike as “adrenaline seekers” and with the even more muscular 1200cc V-Twin coupled with chassis redesigns, that’s exactly what it offers. 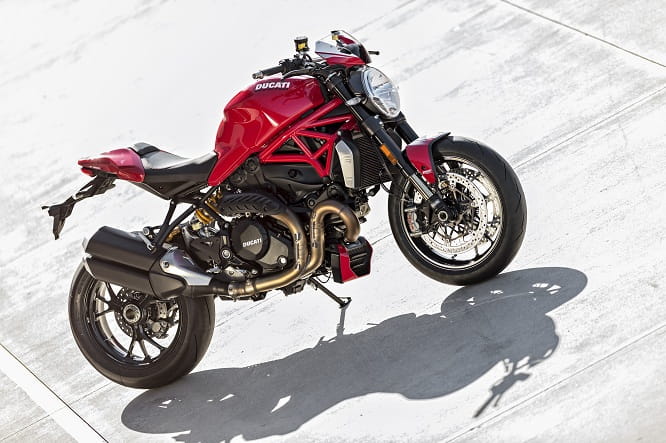 Designed for those who want a little race-inspiration with their naked practicality, the ‘R’ takes over the mantel set by the ‘S’ when it was launched in 2014. With its extra power, new suspension, steering damper and weight-saving, the new model takes the fight to the super-naked competition in the shape of the BMW S1000R, Aprilia Tuono V4 1100 RR and KTM Superduke 1290R.

Because it’s an ‘R’ model and because Ducati’s engineers and designers want their customer to know the bike is more than capable on track thanks to its sportier upgrades, the launch took place at the fabulous Ascari Race Resort near Ronda in Southern Spain. It’s owned by a man who man who made a clever piece of equipment to help drill for oil - we don’t begrudge his wealth because he’s made one hell of an automotive playground.

Ducati claim the Monster 1200 R is their ‘most powerful naked ever’ yet even those unfamiliar with the Monster range can tell that a race track is probably not its natural habitat. Nonetheless, the Italians have made their claim so who are we to knock back an invitation to put the latest from the Bologna factory through its paces at such a marvellous setting?

“Have fun”, they said at the end of the press conference just as the assembled journalists are about to push the starter button for the first time…after being informed the chassis has been designed for 50 degree lean angles. Even the test rider, Alessandro Valia, said it would be possible to get his elbow down! 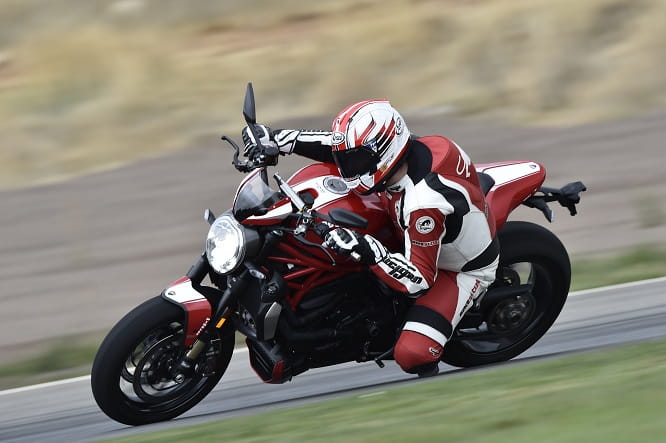 That was one of the disappointing features of the S model when riding on track. Any lean angle greater than can be achieved on a BMX would see vital parts of the exhaust system being scraped along the ground. Not so with R.

The famous Italian V-Twin began the liquid-cooled chapter of its life with the ‘S’ in 2014. The ‘R’ continues with a revised version of the super strong 1200cc Testastretta 11° Dual Spark twin-cylinder engine. Redesigned twin silencers and more oval exhaust pipes that have a wider diameter with a new throttle body all help to boost efficiency while a new lower-height cylinder seal has increased the compression ratio. Overall boosting performance by 15bhp, up to 160bhp. Torque is up too, to 97 ft-lbs.

The 145bhp ‘S’ was a firm favourite at the Bike Social office during the 6 months or so we had one on loan during 2014. Perfectly practical for short hops or longer rides with a potent, powerful engine and the familiar V-Twin sound making every inch of every ride audibly epic. The R takes the magnificence of the S to a whole new level.

The bike has been raised by 15mm both at the front and rear, and the seat height by 20mm up to 830mm. This has made the comfortable riding position we found on the ‘S’ even better now. Add these refinements to the new Ohlins steering damper and the superb Pirelli Diablo Supercorsa SP tyres it wears and the R’s sportier credentials begin to reveal themselves. 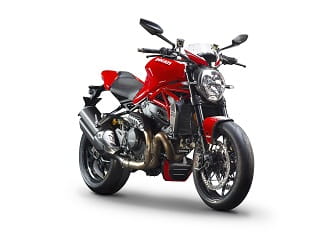 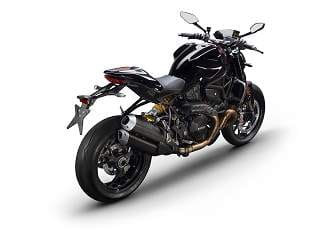 Other noticeable upgrades include an evident attempt to make the bike appear more compact. A brand new and more angled tail design plus a shorter, thinner single-piece rider and pillion seat means, that when viewed from above, the bike replicates the female body shape, according to its Chief Designer, Gianandrea Fabbro. It also moves the registration plate holder away from the rear tyre and up to a more traditional position.

These and the 3-spoke light alloy, forged wheels (inspired by the Panigale R), carbon fibre parts and new foot pegs have helped reduce weight by 2kg down to 180kg (dry). 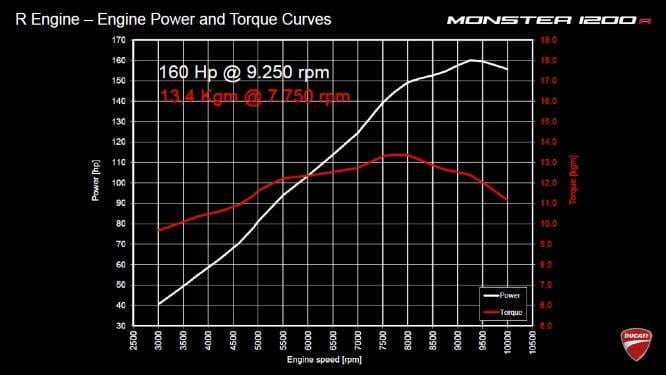 A 1200cc V-Twin is always going to offer a sack-full of torque, and with the Monster R you not left wanting. As you roll-on the throttle, not only is the smooth power delivery almost fool-proof, Ducati also claim 75% of the torque is available from as little as 3500rpm.

Feed in the remaining power and the bike continues to pull and pull. Easy enough to manage at low-to-medium revs, the bike still has plenty to offer as you unravel the motor beyond 7000pm. The red line is 10,200rpm and it doesn’t whimper out. In fact, under hard acceleration, you’ll still be gaining significant pace as the bikes gently taps you on the shoulder and excuses itself for running out of revs.

If only this were in the same bhp league as a Tuono V4 1100RR or what KTM claim the Superduke R makes. A claimed 160bhp might be Ducati’s “most powerful naked yet” but why couldn’t it have had an extra 15bhp on top of that? Maybe we’ll find out with future models. 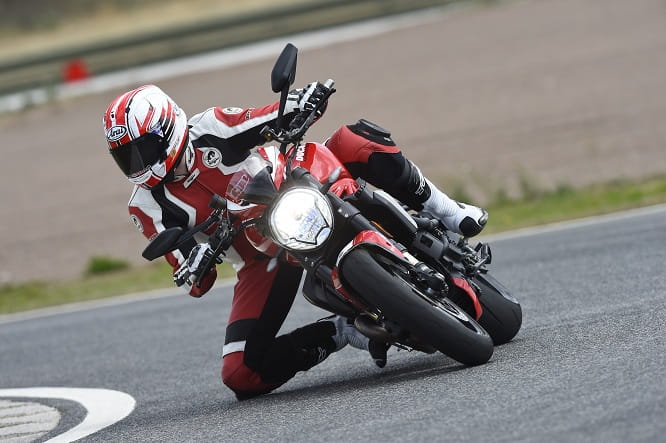 Out of a 2nd gear hairpin with the bike in Sport mode, one of the three riding modes to have transferred across from the S (the others being Urban and Touring), and the standard DTC (Ducati Traction Control) setting, still allows you to crack open the throttle while still standing the bike up with minimal worry.

Brownie points and a hearty backslap must also go to the Pirelli Diablo Supercorsa SP rubber in this instance. The power is delivered as smooth as the marble floor at a Dubai hotel, despite the howling V-Twin throwing the fruits of its innards out of the twin over-and-under pipes to great audible marvel. A set of Termignoni carbon slip-ons are an optional extra which boost bhp and, to the delight of your neighbours, dB.

Such is the availability of the torque in the low-mid range of the 1200cc V-Twin, there's often no need to change down for a corner because the Monster 1200 R will pick you up and drag you along.

In any case, the light-feeling clutch offers an early bite so you’re moving with minimal release while still offering gear change opportunities with barely any engagement. The bike I rode had barely covered 250 miles so I’d like to think it would need running-in a little more before the gearbox was operating at its smoothest. Therefore the handful of missed gears, in a track situation remember, can be forgiven.

The seat on the R is narrower so despite being higher off the ground it’s just as comfortable if not more so than the S. There’s plenty of room to move around and the shape of the 17.5 litre fuel tank allows for the knee to hug in the right places if you find yourself on track and aiming to get the opposite knee down.

The extra height is balanced by the smaller gap between your knees so the shorter rider needn't fret. The riding position has been designed with both comfort and sports in mind. You could cover a full tank’s worth of some 160 miles on the S without requiring any more than a rare leg-stretch and, while the longest period of time spent on the bike during the track test was 15 minutes, the R came across as even more comfortable. The one-piece handlebar and switchgear is all in the right place and comfortable enough to operate without note of any discomfort. 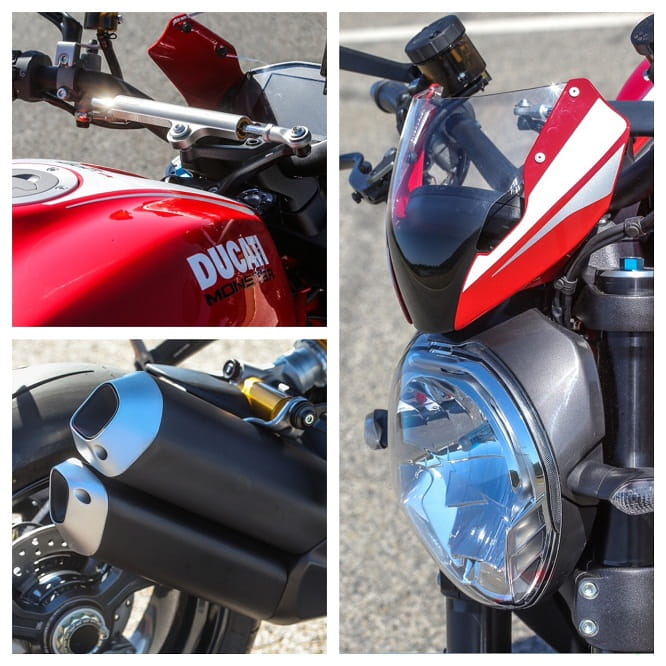 Adding to the rider’s comfort and overall riding experience is the addition of two simple standard features; a fly screen which is the same as the 821 Monster Stripe and helps reduce wind noise while aesthetically pleasing too. A gear shift indicator has now been included on the hi-tech, TFT, colour instrument display. A personal favourite addition.

The revised suspension in its standard setting is far too soft for the track so a quick adjustment of compression and preload allows for a stiffer set-up so hard acceleration doesn’t result in the bike sitting down at the rear allowing for the bars to lift, go light and waggle. It also means the front end is more stable under braking and more direct into the corners.

Braking is easy thanks to two 330mm semi-floating discs and their four piston Brembo callipers ably assisted by standard-fit ABS, as is the norm for all bikes from 2016 onwards. The V-Twin has a hearty amount of engine braking up its sleeve too, so on more than one occasion I braked far too early considering the bike’s ability.

Just like the S before it, the liquid-cooled engine’s technology lends itself to longer service intervals with valve clearance not required until 18,000 miles. While on practicality, the rear view mirrors are worth a shout; useful, not hideous, positioned well and easily adjustable. 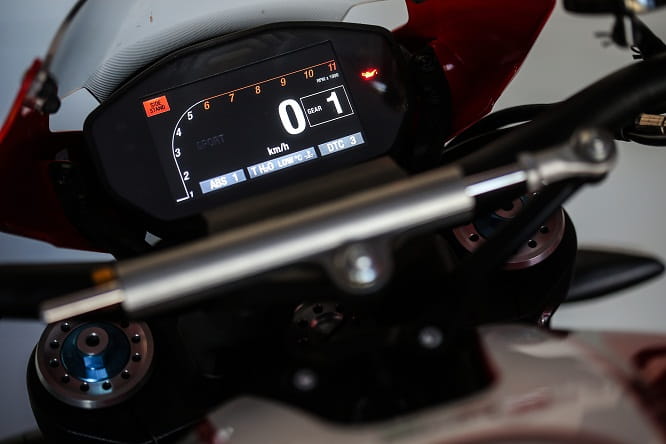 The only question that remains is, if the 160bhp Monster is ‘the most powerful naked’ Ducati have built then what is a Diavel? At 162bhp the Bologna factory certainly made sure with their marketing paraphernalia that “it’s not a cruiser” when it was released?!

If you think the standard version looks special, wait until you see the Black, sorry Thrilling Black, version decorated with no less than fifteen of Ducati's official accessories all available from a Ducati dealer near you shortly. 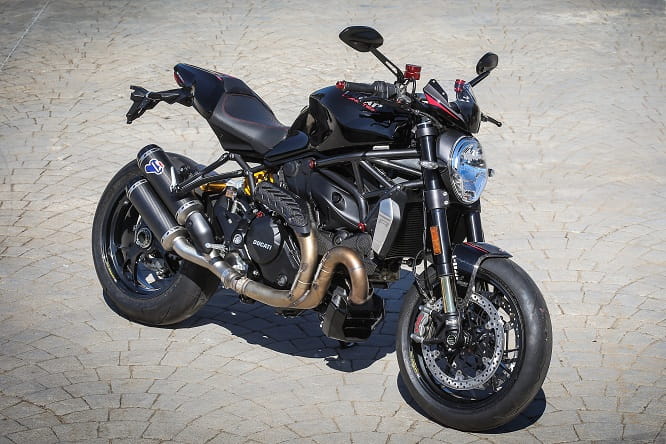 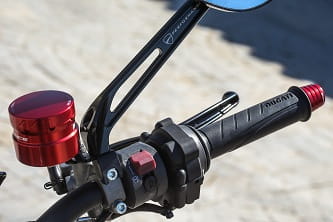 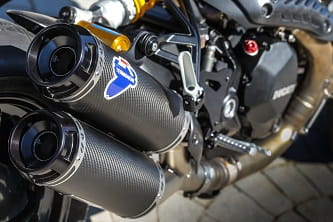