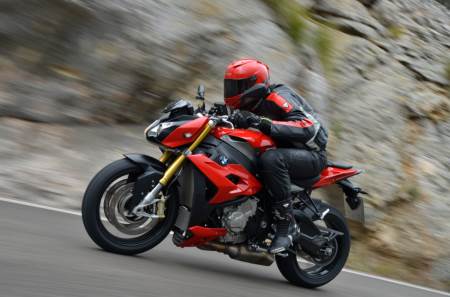 It should come as no great surprise that the S1000R Sport is stunningly fast, handles superbly, is crammed with clever electronics and looks set to wheelie past all its rivals to the top of the super-naked division. After all, that’s exactly what the S1000RR did in the super-sport class in 2010. It’s taken BMW four years to create a fairingless follow-up and the result is well worth the wait.

The Sport is the more glamorous of two S1000R models, packed with high-tech electronics including semi-active suspension. Both it and the standard S1000R (which comes with its own key feature of a price of less than £10,000) are built with the same philosophy: remove the S1000R’s fairing, bolt on slightly raised one-piece handlebar in place of the clip-ons, retune the engine for more midrange, and tweak the chassis to create a rapid sit-up-and-beg superbike.

The S1000R inherits the RR’s evil asymmetrical glare, and plenty of its aggressive attitude too. Its 999cc, 16-valve motor is modified with a reshaped cylinder head, softer cams, revised injection system and new four-into-one pipe. Peak output is 30bhp down too, but that still leaves a healthy max of 160bhp at 11,000rpm. 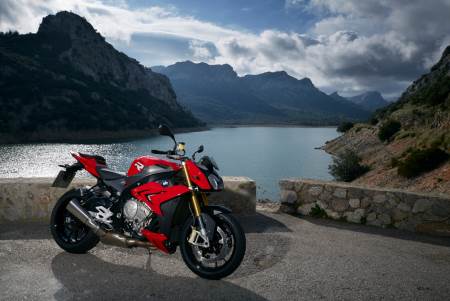 Similarly the aluminium twin-spar frame is based on the RR’s but steering geometry is less steep and wheelbase longer for added stability. The electronics package depends on the model, with the standard S1000R getting two engine modes (Road and Rain, the latter with reduced 136bhp max), plus ASC traction control and ABS brakes.

The Sport adds to this with two extra riding modes, Dynamic and Dynamic Pro, intended for fast road or track riding. Its traction control is the more sophisticated DTC (Dynamic Traction Control), which incorporates a lean angle sensor. It also has Dynamic Damping Control semi-active suspension, as used by the HP4.

That raised handlebar gives a pretty upright riding position, with a fairly low seat and footrests fairly rearset without being cramped. There’s not much wind protection from the tiny flyscreen but after I’d set off from the launch base in Majorca the BMW immediately felt agile, manageable and even comfortable.

The engine is superb, combining a deliciously raw and rev-happy feel with smoothness and flawless throttle response. Its rev limit is two grand lower than the RR’s, at 12,000rpm, so it can’t match that bike’s top-end rush. But it compensates with more grunt everywhere below 9000rpm. Midrange response in all riding modes is instant and strong, low-rev delivery makes town riding easy, and you’re never more than a tweak of the throttle away grin-inducing acceleration.

The Sport is good for 160mph if your neck muscles are up to it, and its sweet gearbox and efficient quick-shifter help it put big numbers on the digital speedo very quickly. Yet the power is also superbly controllable, and the refined DTC traction control system coped impressively with occasionally slippery Spanish roads, while also allowing wheelies on demand. 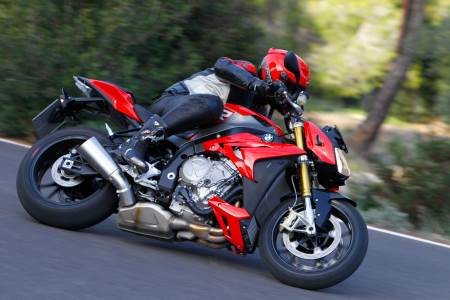 The Sport’s chassis is equally impressive, the DDC system coming into its own to give outstandingly supple ride quality in Road mode in town, then at the press of a button to Dynamic or Dynamic Pro delivering superbly taut and controllable handling for carving Majorca’s many twisty roads. At 207kg with fuel the Sport is as light as the RR, and it steers with effortless precision.

Braking from the radial Brembo system is fierce yet controllable, and backed up by ABS that can be set to allow rear-wheel skids in Dynamic Pro mode, if that’s your thing. There’s heaps of ground clearance, and fat Pirelli Diablo Rosso Corsas to make use of it.

Super-naked bikes aren’t built primarily for practicality but the BMW is more versatile than most. Its reasonably fuel-efficient motor should give over 40mpg and a range of 140 miles from the 17.5-litre tank. Wind protection is minimal, but the Sport even comes with heated grips, as well as LED indicators and the quick-shifter. Accessories include a bigger flyscreen and more comfortable seats as well as luggage and tuning parts.

The S1000R’s final weapon is a price that’s every bit as competitive as its performance. The basic model costs £9990 and the Sport looks even better value at £11,390. Four years after the S1000RR came straight in at Number One, it looks as though BMW have done it again.