Kawasaki’s Z1000SX sports-tourer is one of, if not the, Japanese manufacturer's best sellers and its 2016 model will see ABS fitted as standard, the introduction of a slipper clutch and an updated colour range. But if the guys in Green were serious about moving the bike onto the next level to stay ahead of the competition, they could have done a whole lot more.

However, when Suzuki introduced its challenger into the UK Kawasaki must have clenched. Taking its not-so-secret weapon in the shape of the K5 engine from the ’05 - ‘08 Suzuki GSX-R1000 and building a sport-touring machine around it, gave us the opportunity to put the two head-to-head. 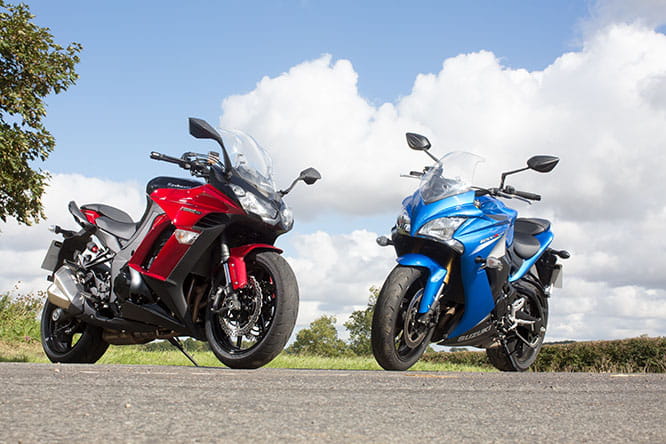 ‘Sports-tourer’. It’s a vague description. How should a potential customer look at that? Are the manufacturers selling a sports-bike that’s comfortable and fit for luggage or on the flip side, is it a big touring machine packed with 180+bhp? Does the answer lie within either of these two bikes? Well, it depends on how much bike, technology, comfort etc. you’d like for your money. A glance at each and a scan over their head-to-head statistics and these litre-bike stack up pretty evenly.

If truth be told, the Kawasaki and Suzuki do a bit of ‘sports’ and a bit of ‘tour’, more than adequately but both left me feel wanting for more. For example, while the Z1000SX has plenty of room in the saddle, the package is not comfortable enough for long-distance riding. Neither are refined enough in build quality nor technology compared to the BMW S1000XR or Ducati Multistrada – though it’s fair to point out there’s a £2400k price difference to even the most basic model in the BMW range.

The more miles covered on each and the further apart these two become. Suzuki leans heavily towards the sports side of the fence as the Kawasaki attempts to be a jack-of-all-trades which the more experienced rider will discover its actually master of not many.

Both are priced below the £10k mark in standard form – Suzuki by £1 and Kawasaki by £301 - and for that there’s a whole lot of motorcycle on offer for the daily commute with enough oomph for a thrill on a Sunday cruise or a to worry the thoroughbred sports boys off the line. 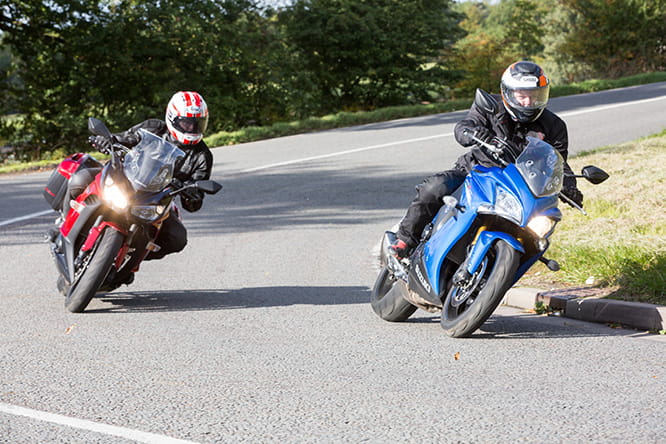 Both offer over 140bhp with the Suzuki edging ahead (143.5 v 140.1) and certainly the GSX-S1000F applies its power in a sportier manner. It’s smooth and climbs hard in the mid-range, screaming like a 600 all the way to its peak torque band. The engine is a peach with its tall gears and is perfectly balanced in the chassis to offer a sportier ride. The higher bars naturally affect the speed of turn compared to a full-on sports bike but this Suzuki is only 10kg heavier than the GSX-R1000, which is testament to the Japanese engineers’ development.

The most significant difference between the two is weight and that affects performance. The Z1000SX is by far the heavier of the two, carrying an extra 17kg even without the added weight of the panniers on our test bike. It feels bigger, bulkier and more like a touring bike should. The Suzuki has no luggage options and one look at the pillion seat and you quickly realise this is much more sports than tourer. Unlike the Kawasaki which has a flatter, deeper, wider pillion seat and a decent grab rail too. The rear suspension includes a remote preload adjuster to facilitate setting up for rides with a passenger and/or luggage.

The 2 x 28 litre panniers are a £462 optional extra and are big enough to fit most full-face helmets. Easy to mount and dismount with a one-key operating system too. Unlike some bikes without their luggage, the Z1000SX’s look is not compromised with its versions removed. 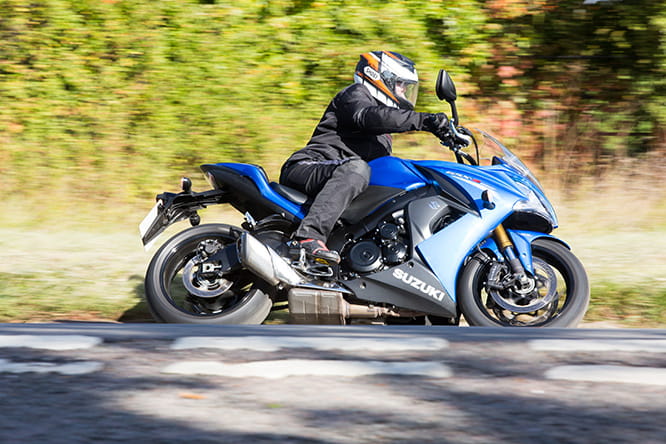 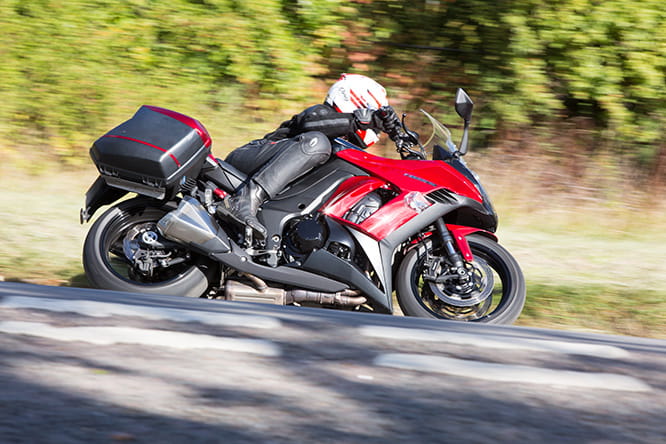 Being a heavier machine with higher bars the Kawasaki is less able when manoeuvring at low speeds as well as the faster corners compared to the GSX-S1000F. Its not a lumberer like a Triumph Rocket or Harley Electra Glide but it certainly leans on the side of tourer instead of sports.

The big torque figures give the Kawasaki an effective and useable rev range up to a peak of 10,000rpm which provides an opportunity to make significant progress without being too scary. It too needs encouraging higher up in the range to maximise performance; make it scream and you’ll be rewarded. The engine is solid without being spectacular and cruising around at 4000rpm in top gear will achieve 60mph and mpg figures over 50. The throttle is smooth and progressive enough while the brakes feel strong even at the slightest touch. ABS becomes standard fit on the 2016 model.

The instrument panels and electronic options on both bikes are sub-standard compared to their more illustrious rivals but once again, that is reflected in the RRP. Suzuki’s all-LCD display is the more current while Kawasaki’s is a digital/analogue split. 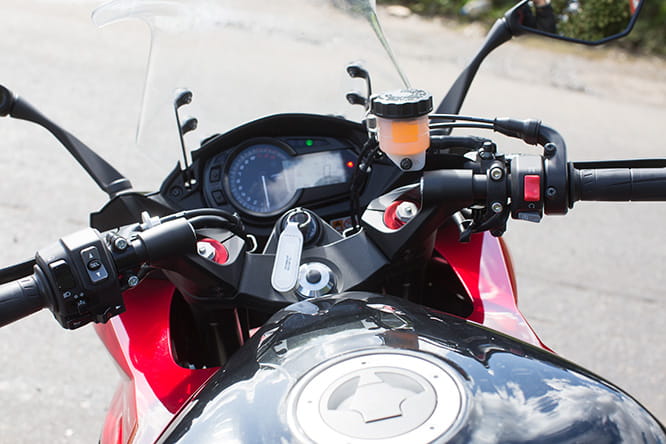 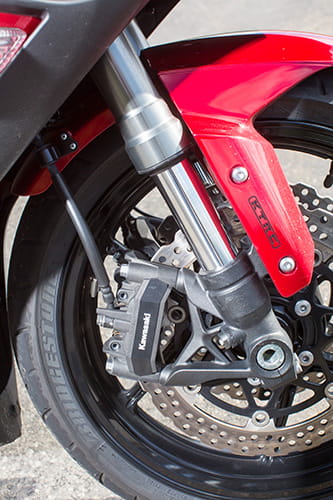 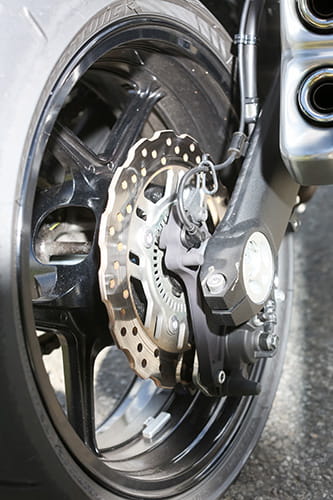 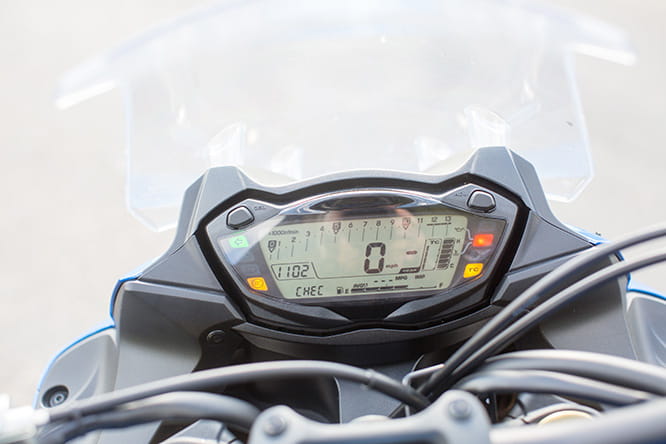 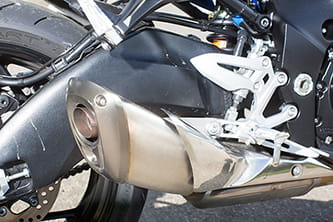 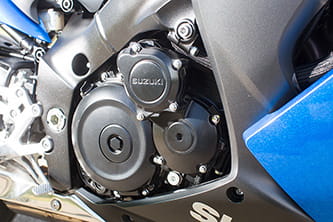 Traction control is operated from the left bar of each bike, through three stages; one being the least sensitive and three being designed for wet riding. The Kawasaki has two power modes allowing the rider to restrict the bike’s power by 20-25% when in Low mode.

The Suzuki also has a smaller fuel tank, 17 litres compared to Kawasaki’s which carries an extra 2 litres. The Z1000SX has an adjustable windscreen, not up and down but in and out by 20 degrees.

The GSX-S1000F is a mature GSX-R with sharp handling and loin-moistening performance all in a more comfortable riding position. There are few frills and don’t expect to tour on the Suzuki. And its that which separates it from Kawasaki’s Z1000SX which is a practical, solid bike for proper grown ups who are after a bit of power and a bit of comfort with the option of attaching some luggage for a weekend away…but not in the South of France.

For two bikes that are so similar on paper, these two could not be more dissimilar on the road. In truth they are apples and oranges. Both are sub £10k litre bikes, upright, fast and faired, but in reality they are much, much different.

With the GSX-S1000F, Suzuki have simply built an honest to goodness sports bike that doesn’t pretend to be a race replica. That engine is plenty lusty and gives more than enough real world performance. By dialling out the ‘race rep’ and ditching the clip-ons, the Suzuki gains some comfort and saves some dollars.

There’s not much else out there in the marketplace to compare it to, which probably says a lot more about the fashion driven nature of riders than anything else. The Gixxer boys will probably dismiss the GSX-S as a bit bland, but if you’re a sensible sort of human being with an occasional naughty streak, the Suzuki’s got more than enough mumbo to rock your world. As a shortie who could at best be described as an average rider, the GSX-S inspires confidence and feels less scary than the power figures would suggest. It has a taut chassis and is a good bike that represents great value, though I doubt we’ll see too many on the road.

It is a bit old school. Traction control is a useful addition but, like the ABS, feels a generation behind that of the latest models. Styling is definitely more margarine sandwich than MotoGP but, then again, it is a bike for grown ups who have already tired of willy waving in the bar room Grand Prix. It’s also Not A Sports Tourer. Got that?

By contrast, Kawasaki seem to have thrown the kitchen sink at the SX and tried to make it all things to all riders. Frankly I found it all somewhat at odds with itself. The engine is buzzy, the brakes grabby and the chassis too heavy and lazy. Where the Suzuki makes no claim to be a tourer, the Kawasaki seems constrained by it. It’s a confused mix that delivers the best of no worlds and, if you really must, try Triumph’s aging Sprint GT instead. It’s a little cheaper, a little more touring and a bit better specced in the areas that matter. Still no great shakes though… 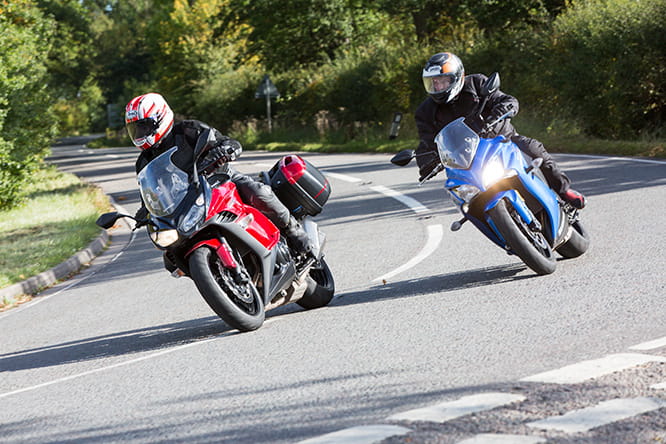 Do you own either bike? Tell us about their good and bad bits.