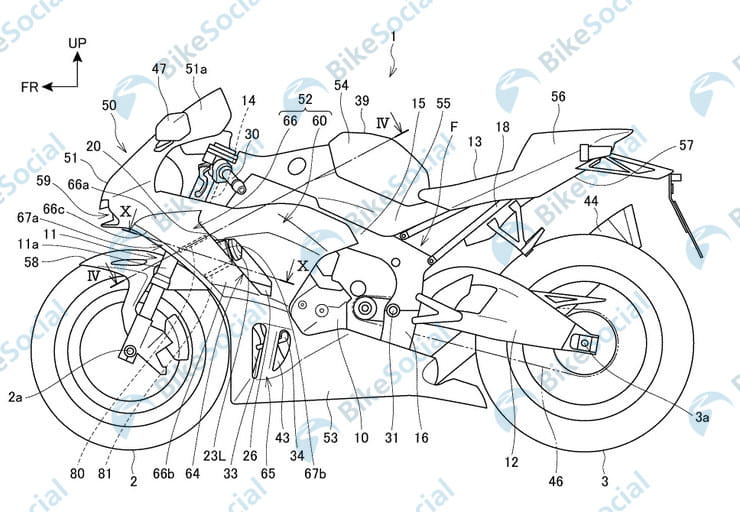 Aerodynamics is already well established as key technical battleground in racing and road-going superbikes are increasingly adopting downforce-inducing winglets to mimic their on-track brethren. Now Honda is preparing to up the game by introducing active aerodynamics with moving winglets to create downforce when it’s needed but cut drag when it isn’t.

The new idea is revealed on a new patent application from the firm which also appears to show a complete new inline four-cylinder superbike – potentially the first glimpse of the highly-anticipated 2020 Honda Fireblade. 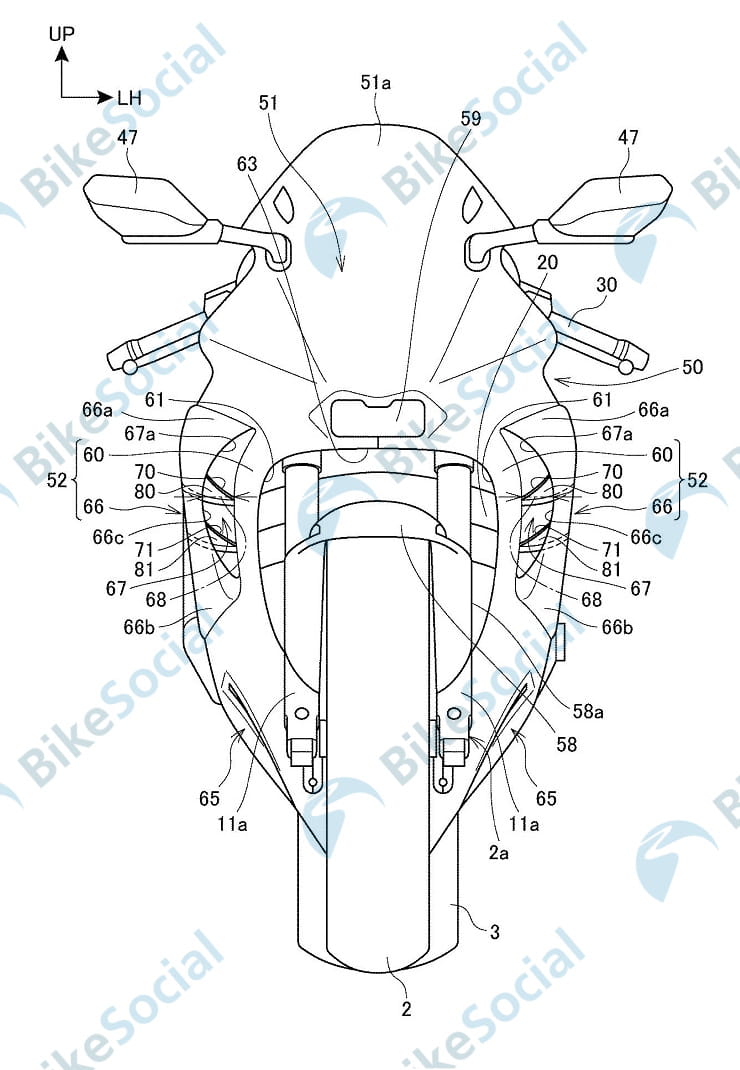 The bike features a fairing that clearly takes its inspiration from the RC213V MotoGP machine, with a mouth-like central air intake. According to the patent’s text, the road version’s headlight nestles inside this intake – virtually hidden from view to give a race-style appearance. The patent also clearly shows mirrors, rear lights and a licence plate hanger, leaving no doubt that this is a road bike rather than an out-and-out racer.

Under the fairing, according to the patent’s text, there’s an inline four-cylinder engine – meaning this isn’t the V4 Honda superbike that’s been subject of regular rumours (and patents) for about a decade.

Seen from above in this cutaway image, the winglets move in or out using servos and control cables.

The key part of the new design is, of course, the active aerodynamics. This comes in the form of four winglets, two on either side of the fairing behind ‘floating’ side panels that help control the airflow over them.

The idea is actually very simple. Those biplane-style winglets are at a steep angle of attack helping direct airflow in such a way that they create downforce. That’s helpful when it comes to keeping the front wheel on the ground during acceleration and increasing front-end grip during corners, but flat-out in a straight line they induce drag without any benefit.

The solution? Retract the winglets back into the fairing when they’re not needed. Simple.

It really is. The patent shows that each of the four winglets pivots at the front. They’re sprung so that the default position is ‘out’, but cables connected motorized servos and the rear of the winglets can pull them, either automatically at the request of the bike’s ECU or via a rider-operated button.

According to the patent, the main idea is to have two such servos – one on each side – which can even allow the computer to choose to retract just the left or right winglets; presumably with potential gains in cornering. Another option is to have a single, central servo that operates all four winglets to save space and weight.

The system is simple and lightweight. Winglets pivot at the front and slide in reinforced channels at the back to take the pressure of the downforce.

Because the winglets are sprung, the design is has a built-in failsafe. If there’s an electrical fault stopping the servos from working, or simply a broken operating cable, they’ll revert to the ‘out’ position. That means a rider shouldn’t ever find themselves turning into a corner expecting the downforce of the winglets and finding it missing. The Drag Reduction System (DRS) used on modern Formula 1 cars operates on a similar basis.

Perhaps surprisingly it looks like this idea could be legal in WSB racing, and with Alvaro Bautista believed to have been tempted away to Honda from Ducati for 2020 with the promise of a spectacular new race bike, maybe this is part of Honda’s plan. We’ve also seen patents that suggest Honda is adding variable valve timing to the next-gen Fireblade to boost power and torque.

British Superbike boss, Stuart Higgs, said, “Aero devices (wings) in Superbike only applies if such a device is on the homologated road version.”

Back in 2018, Japanese sources expected the new Fireblade to be ready in time for this year and said it was likely to make a stunning 212bhp. While it didn’t happen in time for the 2019 model year, other elements of those rumours are backed up in the new patent, including the use of a central air intake on the nose and winglets mounted on the fairing.

Last year, Aprilia’s RS660 concept bike – a machine that’s heading for production in 2020 – also promised to have active aerodynamics, although there’s been no explanation yet as to precisely how the Aprilia system works. Like the new Honda patent, the RS660 has winglets behind large additional side panels outside the main bodywork, so there’s a chance the firm’s aero solution is a similar one. 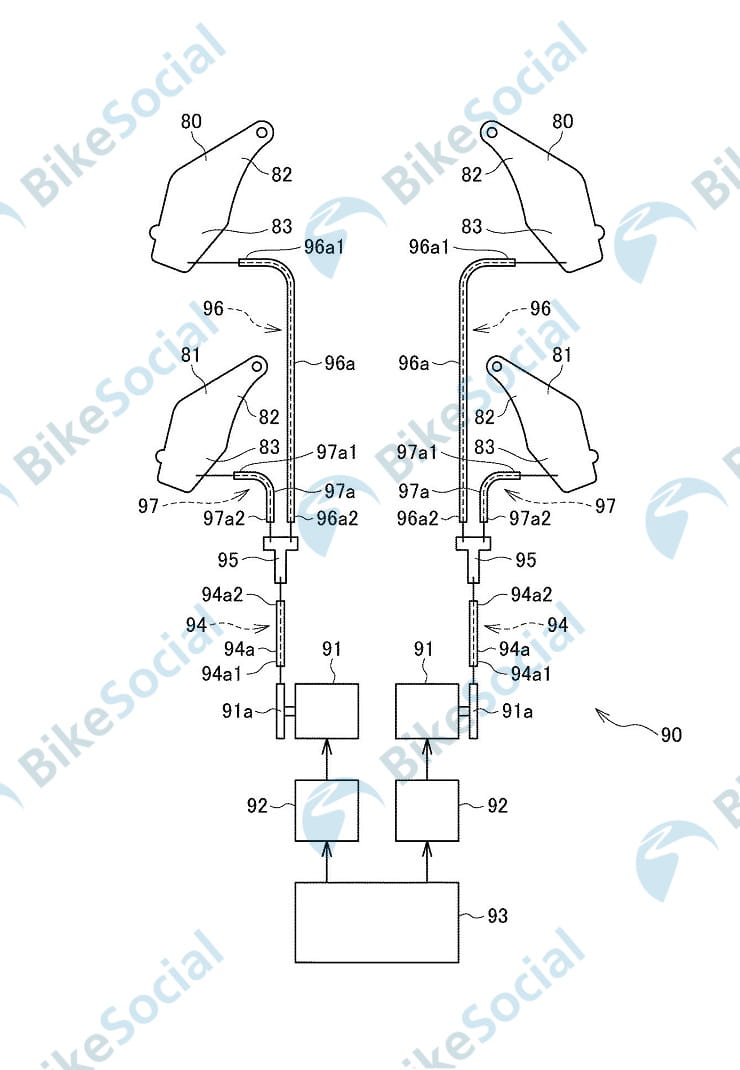 This shows the mechanical layout of the system, with an ECU (93), drive circuits (92), servos (91) and control cables operating the four winglets.

If this patent depicts, as it seems, the next-generation Fireblade, then it appears to be putting a nail in the coffin of the idea of Honda offering a limited-run V4-powered superbike alongside the mass-market CBR1000RR.

It’s true that Honda has long been working on the idea of a V4 superbike, built using a derivative of the RC213V’s MotoGP engine, to create a range that would hark back to its WSB glory days when homologation specials including the RC30, RC45 and VTR1000 SP1 took the title while the inline-four Fireblade ruled the roost on the road. However, the impending Euro 5 emissions limits add a significant new hurdle to the idea of making a road-legal, MotoGP-based V4 as well as a mass-produced inline four. Combined with the diminishing market for superbikes, it’s likely Honda has had to plump for just the inline-four option. With Kawasaki showing that there’s clearly no ingrained reason why inline engines should struggle compared to V4s in WSB (and Yamaha and Suzuki doing the same in MotoGP), the case for building both machines is increasingly hard to argue for.

Patents for the V4-powered Honda superbike peaked in 2016 and 2017 but there haven’t been any new ones for at least a year now, adding weight to ideas that development of that bike might have been cancelled.

Honda has a long history of developing competing models simultaneously before deciding which route to take. Back in the 1980s the V4-engined RC30 was designed alongside a rival inline-four model, the CBR750RR. In that instance the inline-four model lost out in the contest to become Honda’s top superbike, but it was revived a few years later with a capacity boost and a new name – FireBlade. If the next-gen Blade has now seen off a V4 rival to be Honda’s top superbike of the 2020s, perhaps that’s overdue payback…