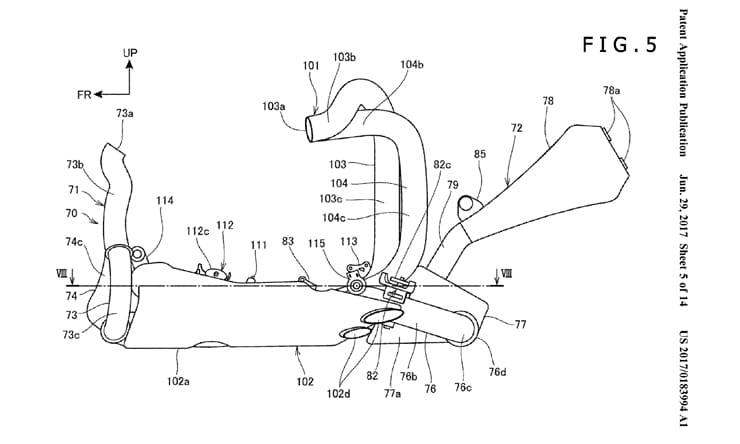 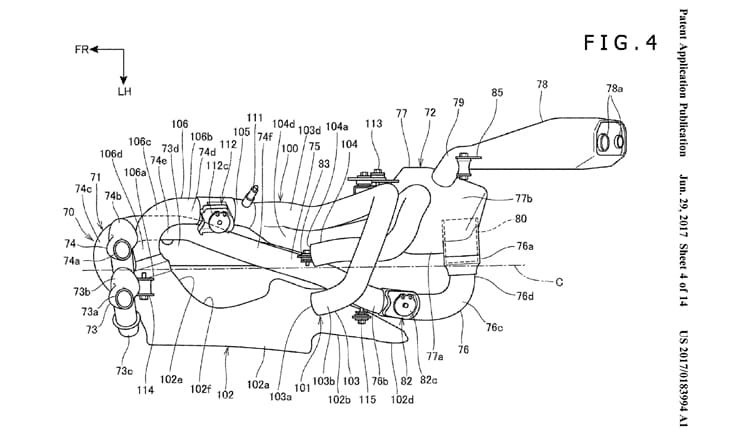 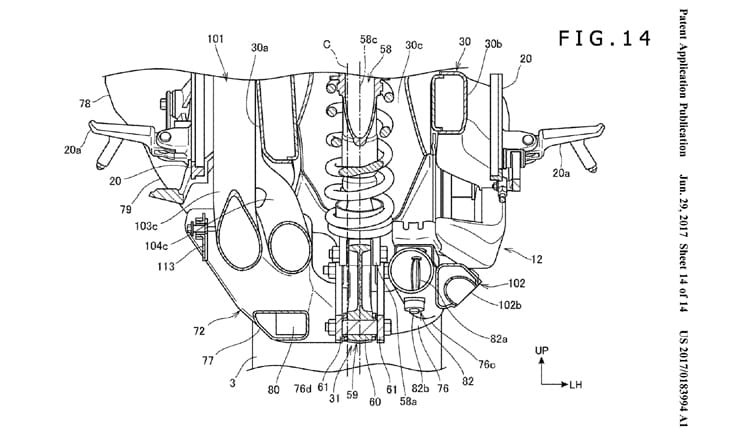 Ducati’s upcoming superbike might be a star of 2018 but it isn’t the only V4-powered sportster under development. Honda’s much-rumoured 1000cc V4 is also getting nearer to completion and we’ve just got the latest intelligence about it.

Thanks to a newly-published patent application, we’ve got a great view of much of the upcoming bike’s technical detail. 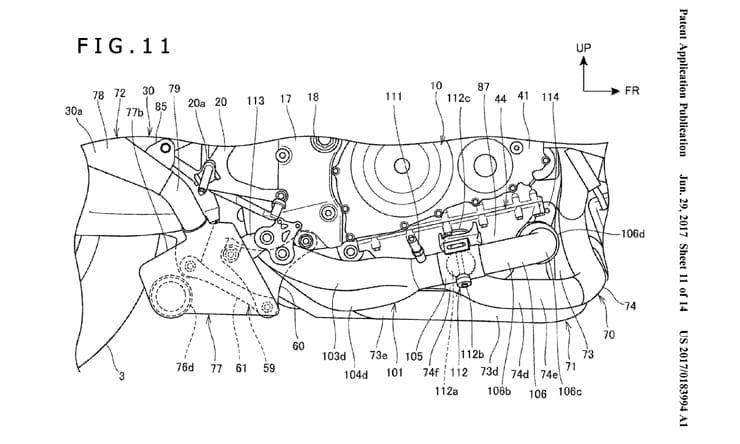 The patent revolves around the exhaust. It’s a particularly key area because it once-and-for-all confirms that we’re looking at a road-legal bike, not a racer, and that it’s not to do with the existing RC213V-S. The exhaust layout also has knock-on effects on other details including the frame, swingarm and rear suspension layout.

Let’s start with that new exhaust system. Ducati’s upcoming V4 is impressive in that it’s managed to package the entire exhaust underneath the engine, and Honda nearly achieves the same trick. But it goes about it a very different way.

The Honda system revealed in the new patent keeps the pipes for the front and rear cylinder banks separate throughout rather than feeding them into a shared collector box. It leads to a lopsided but rather attractive layout. The pipes from the front cylinder bank merge into one and run underneath the engine into a fairly conventional collector just ahead of the swingarm, exiting via a small silencer in the normal position on the right hand side of the bike. But the rear cylinder bank’s pipes run the other direction, looping forwards around the engine’s sump and then back again to combined collector and silencer lying in the left hand side of the bellypan, with a pair of slash-cut exit holes to release the gas.

Each of these completely separate exhaust systems has its own EXUP-style back-pressure-adjusting valve, electronically controlled to tune the exhaust’s behaviour.

Keeping the front and rear banks’ exhausts completely separate follows the same thinking that Honda has used for years in MotoGP, and since the new V4 superbike is expected to use a derivative of the RC213V-S’s road-legalised GP engine, it makes sense to stick to the idea.

As well as looking uniquely cool, the set-up frees up space low-down ahead of the rear wheel. On most superbikes, this area is packed with catalytic converters, collector boxes or silencers, which means they can’t use the under-slung swingarm bracing that’s currently favoured in MotoGP. One exception is the Honda RC213V-S, which routes its rear cylinder exhausts under the seat to similarly free up the space for the swingarm and rear shock.

Previous patent applications for the more mass-made Honda V4 superbike have already confirmed that it won’t use the under-seat exhaust. Instead, the firm has applied for patents for an aerodynamic tail unit that allows airflow through it as well as over it to reduce overall drag. 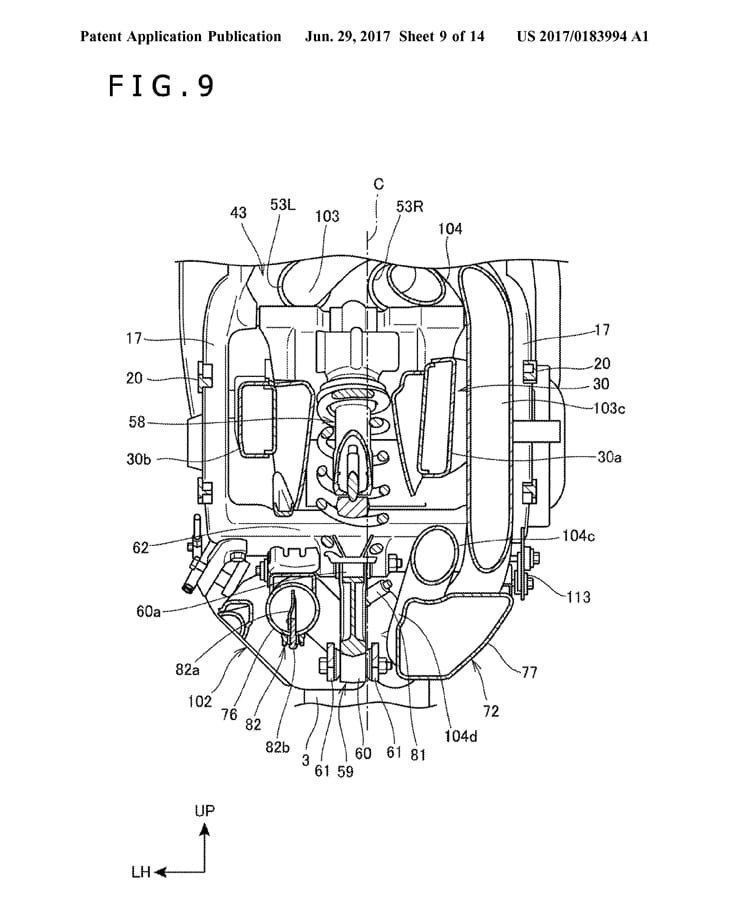 Other earlier patent documents have also revealed details like the near-frameless design of the bike, which is again confirmed here. The headstock is connected to a half-chassis that bolts to the front of the engine case and to the rear cylinder head. It’s not dissimilar to what’s expected on the new Ducati V4 superbike. On this patent application, the front frame section wraps around a conventional airbox, although Honda has previously patented a second design which incorporates the airbox into a monocoque front frame design, rather like the Ducati Panigale’s. 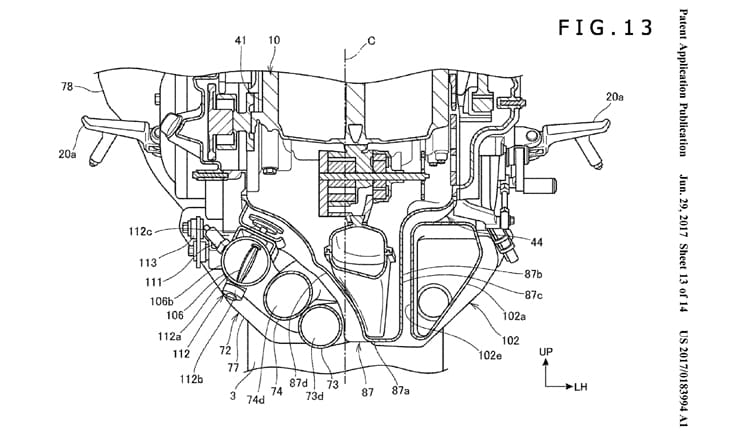 At the back, a cast seat subframe – probably made from aluminium but possibly magnesium or even a composite – is again supported on the rear cylinder head. A smaller section of frame attaches to the swingarm pivot point and provides an upper mount for the rear shock.

Overall, the new patent leaves little to the imagination other than the bike’s final styling.

Precisely what Honda’s plans are regarding the machine aren’t known for certain. One European source told us that the plan was for a Euro 5 compliant machine. That’s a while off yet then although it could still be launched ahead of that, especially with Ducati going V4 next year.

There’s speculation that it could be released next year as part of celebrations of Honda’s 70th anniversary. The firm was incorporated on 24 September 1948. It’s also believed that it’s intended to be a WSB-legal homologation bike, sitting alongside the more road-oriented Fireblade in the range just as the RC30 and RC45 were sold alongside earlier incarnations of the Blade. To achieve that goal, it will have to fall under the €40,000 price cap required by WSB regulations. Not cheap, but an awful lot less expensive than the RC213V-S that shares the same engine.