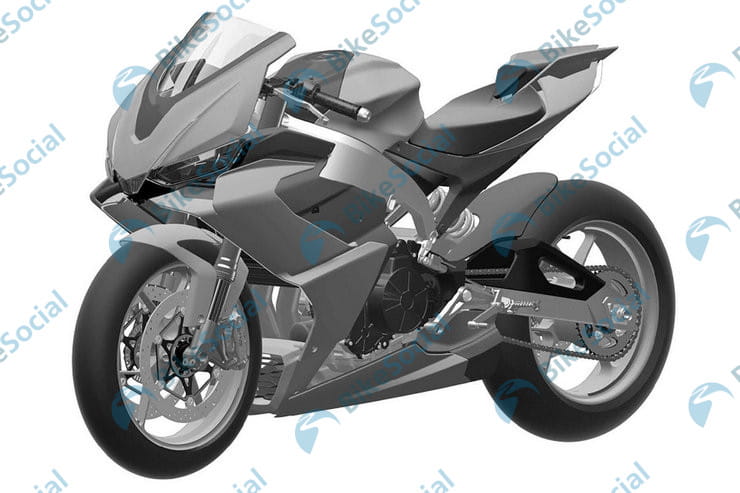 The 600-class supersports market has been in terminal decline for years now but the surprise appearance of Aprilia’s class-bucking RS660 concept at last year’s EICMA show in Milan gave hope that a new market is about to open for sports bike fans who don’t want to embrace the full insanity of a 1000cc-class superbike.

Anyone who cut their teeth riding a sporty middleweight, whether it was a 250cc two-stroke, a grey-import 400cc four-cylinder or one of the classic 1990s 600cc supersports models, will understand that out-and-out performance isn’t the be-all and end-all of sports bike appeal. It’s something that seems to have been forgotten as manufacturers battle for supremacy in the 200hp-plus superbike arena, but the new Aprilia RS660 concept suggests that someone in Aprilia’s product planning department has a hankering to return to an era when delicate handling, lightweight sports machines offered a more subtle pleasure than the sledgehammer hit of a superbike’s acceleration.

Aprilia has remained officially quiet about its plans for a production version of the RS660, but now the firm has filed for intellectual property rights on the bike’s styling and the images reveal how a showroom version of the bike is likely to look. 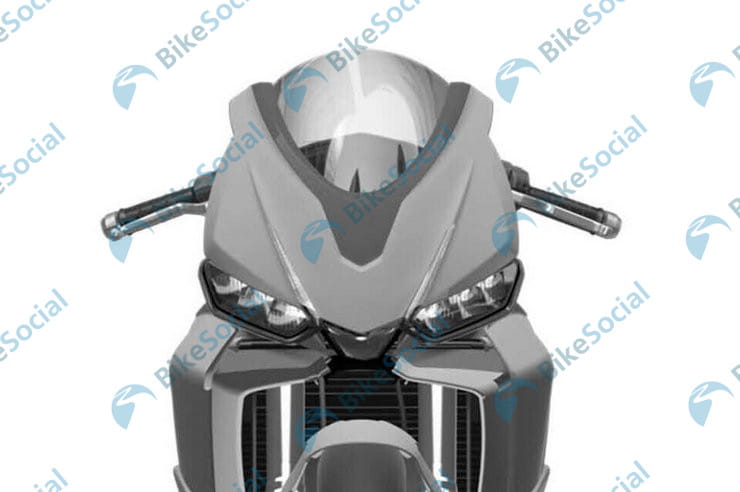 The good news is that the styling is essentially the same as last year’s concept bike, and the changes that have been made suggest Aprilia is looking for ways to keep the cost down. If anything, the appearance is improved by the subtle tweaks made since the concept was shown.

You’ve got to look pretty carefully to spot the differences, but when the concept bike and the new designs are put side-by-side they become clearer. On the bodywork, there are considerable changes to the side panels, which get rid of the air vents in the sides but become less enveloping, presumably gaining the lost airflow in the process. Notably there’s a cutaway near the top of the sides, showing off more of the bike’s frame, and the lower sections of the side panels are slimmer and reveal a little more of the engine.

Further up, the nose shape is generally unchanged but the headlights are simplified, losing the LED indicators that were built into a strip at edge of each of the concept bike’s lamps. Instead, it appears Aprilia will be fitting conventional stalk-mounted indicators, with the new CAD images showing what appear to be mounting brackets for them on each side panel.

Mechanically, the most notable changes include the forks, which are the same 43mm Sachs units currently used on the RSV4 RR. The concept version of the RS660 featured Ohlins forks, more like the ones used on the RSV4 Factory. Of course, Aprilia might well chose to offer more than one version of the RS660, just as it does with the RSV4, with a lower-spec model featuring Sachs suspension and the higher-spec version sticking with Ohlins.

Brakes are Brembos, as on the concept, but the caliper themselves appear to be slightly lower-spec monoblocs than the ones that featured on the show bike.

At the top of the forks, the drawings show the production RS660 will use the same top yoke as the RSV4, and the bars are considerably higher and straighter than the concept bike’s low-slung clip-ons. Details worth noting include the fact that the drawings show a conventional ignition barrel attached to the top yoke, suggesting that the bike won’t be using keyless start technology. The instruments are a simple TFT screen, and we can also see that the brake master cylinder on the CAD drawings features a metal reservoir rather than the round plastic one that was used on the prototype. 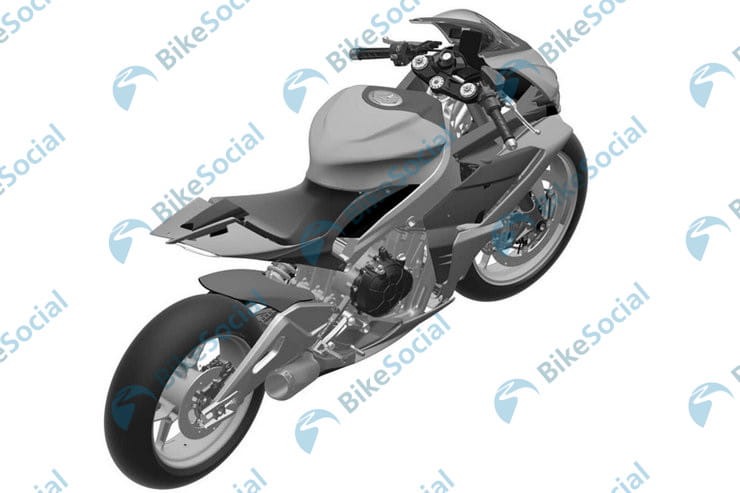 Moving  back, the engine appears identical to the unit seen in the concept. The parallel twin – presumably 660cc, given the bike’s name – is based on the existing RSV4’s V4 engine. Effectively it’s the front bank of that engine, and Aprilia is likely to have extended the stroke to achieve the increased capacity. It’s the same idea that Norton has pursued in creating the parallel twin used in the Atlas and Superlight models, based on the firm’s 1200cc V4. Norton is claiming 84hp for the Atlas-spec version and 105hp for the Superlight, which is the most obvious rival to the new Aprilia in terms of style and purpose.

Since the Aprilia V4 easily passes the 200hp mark in 1100cc form, it’s quite possible that the 660cc twin could make more than 100hp if it’s in a similarly high state of tune, provided Aprilia can give the twin enough balance to let it rev as high as the V4 does.

Behind the motor we see a completely different swingarm design. Where the RS660 concept used a ‘banana’ style arm, hooking up over the exhaust pipe and harking back to the RS250 two-stroke’s style, the new drawings show a much more conventional setup. The exhaust, which looks similar to the pipe on the concept, is mounted lower, allowing the swingarm to have a straighter lower edge and a conventional brace above it. That brace also doubles as the lower mount for the rear shock, which does without a rising-rate linkage and fits directly between the arm and the RS660’s main frame. As with the forks, the shock is a lower-spec unit than the remote-reservoir Ohlins that featured on the show bike.

The frame itself is unchanged, keeping the engine as a structural part and lacking the usual swingarm pivot points that you’d see on a conventional beam frame. 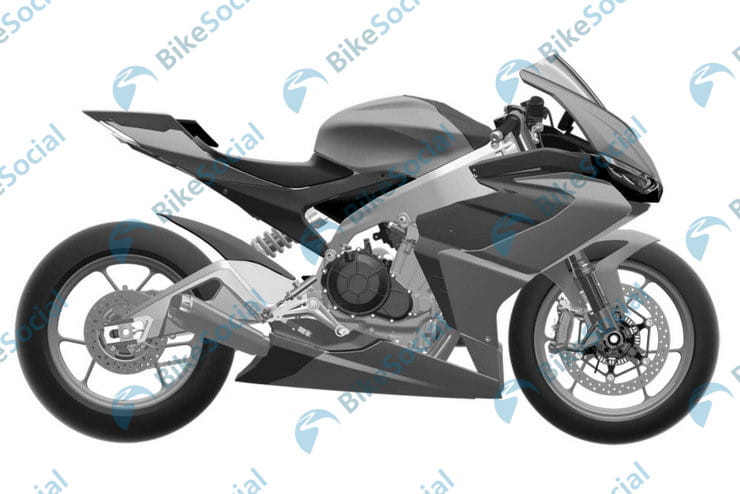 Right at the back, Aprilia seems to be sticking to the idea of a self-supporting seat instead of a separate subframe. As a result, there’s no provision for pillions, either in the form of a seat pad or pegs. However, since it’s a bolt-on section it wouldn’t be a big leap to design a second tail unit that incorporated space for a passenger.

Also lacking are some details that are going to be required for the production bike. As mentioned earlier, the indicators are missing – although mounting points can be seen for the front ones on the sides of the fairing – but there are also no mirrors or licence plate bracket. There do appear to be mounting holes under the tail with the correct spacing to accept the RSV4’s number plate bracket, though.

The wheels are another change compared to the show bike, with Y-shaped spokes rather than the six slanted ones of the show bike’s wheels. Once again, if Aprilia follows the route of offering multiple versions of the RS660 – an RR and a Factory, for instance – it’s quite possible that they’ll be distinguished by their wheels as well as suspension components.

What remains a mystery is the ‘active aerodynamics’ that the show bike claimed to use. The so called “A3” system (Aprilia Active Aerodynamics) was flagged on the side of the bike, but with no explanation given as to its function. It’s clear that there are hoop-shaped wings on the fairing – which remain on the production version seen in the CAD images here – but there doesn’t seem to be any way for them to move. One possibility is that they can be extended outwards when more downforce is needed, although that seems to be a complex and possibly heavy solution. There’s also a chance that the active element of the aerodynamics is hidden within the fairing – perhaps using the radiator’s cooling fans to direct airflow in a way that helps to reduce drag or provide downforce.

All will be revealed later this year, with Aprilia widely tipped to be showing the production version of the RS660 as the centrepiece of its stand at the EICMA show in November.