For years Honda’s CBR1000RR has been the go-to superbike for riders wanting smooth, civilised performance and stereotypical Japanese reliability rather than out-and-out brute performance. But that’s all changing for next year as Honda is taking the 2020 CBR1000RR back to its roots with an all-new design that offers more horsepower than any of its direct rivals. Say hello to the new Fireblade... 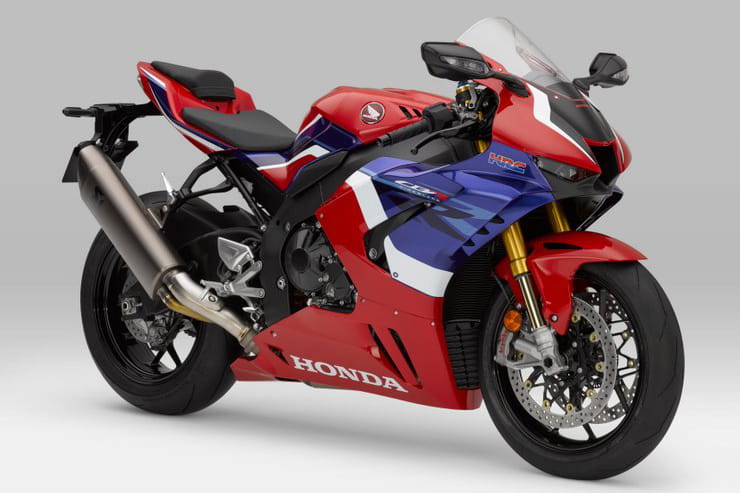 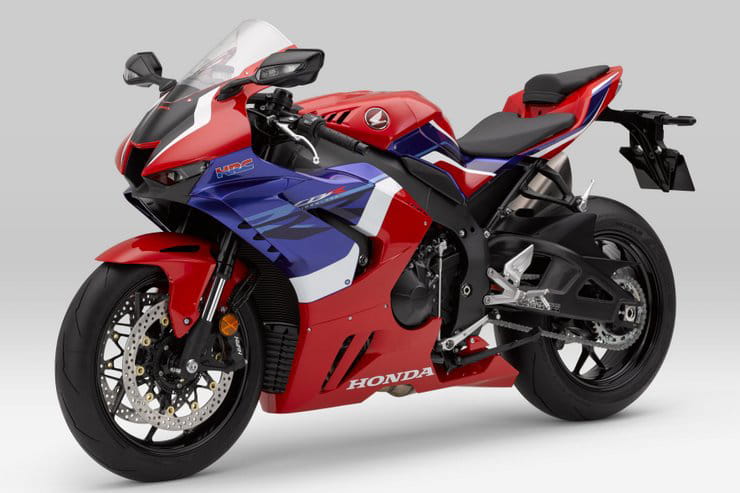 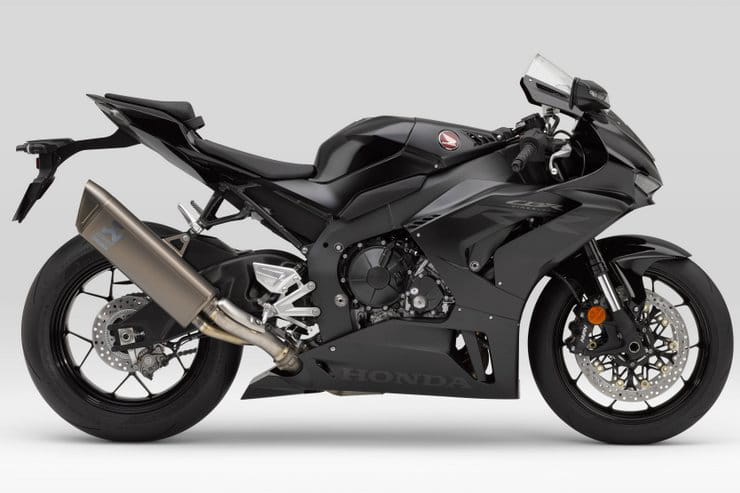 Back in 1992, the original 893cc ’Blade outgunned all-comers thanks to extra capacity that gave it a torque and horsepower edge over 750cc competitors while retaining a weight advantage over 1000cc and 1100cc rivals. Combined with ultra-sharp handling, thanks in part to a 16in front wheel that made it occasionally twitchy, the bike carved an instant reputation as a beast that only the best could tame. However, while each development has added more performance, in the era of 1000cc superbikes the Blade has rarely had as much brute power as its immediate rivals and is has sometimes been seen as something of a soft option. 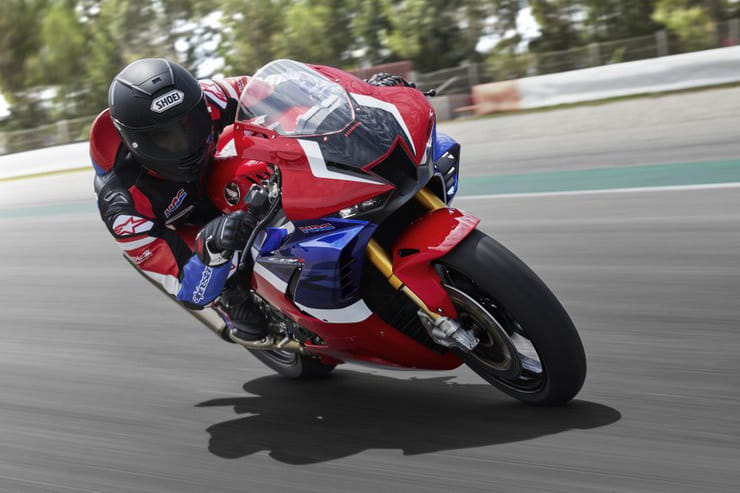 We’re all familiar with the fact that when a Honda is named, every ‘R’ in its title means more performance. Until now, the Fireblade has topped the firm’s R-count with three, both as the CBR900RR and CBR1000RR, but the 2020 bike adds yet another. Yes, it’s the CBR1000RR-R. Try to say that without sounding like a pirate. And if you want even more alphabet soup, there’s a higher-spec CBR1000RR-R SP version in the range, too.

Both bikes share the same engine, and it’s a far cry from the previous one which has been largely unaltered since its introduction way back in 2008. The internal dimensions are shared with the RC213V MotoGP bike, using the MotoGP-limit 81mm bore and 48.5mm stroke (previously 76mm and 55.1mm respectively). Those numbers are partly responsible for the engine’s stratospheric ability to rev, aided and abetted by race-style design including finger-followers instead of buckets between the cams and valves. The cams are also given a Diamond-Like Carbon (DLC) coating to cut friction – a technique first seen on the RC213V-S and not used on any other mass-made model.

The bike’s links to MotoGP go deeper than just its engine dimensions. The CBR1000RR-R’s Large Project Leader, Yuzuru Ishikawa, also developed the 2002 RC211V and the 2016 RC213V-S road bike. You’ll also notice that the 2020 Blade features HRC logos; a rare treatment that Honda reserves for machines that truly have significant design input from the Honda Racing Corporation. Notable previous bearers include the VTR1000 SP1.

Although Honda hasn’t gone to the extent of using race-style gear-driven cams, the Blade does get a shorter-than-normal cam chain driven from an idler gear above the crankshaft. Titanium rods and endless exotic-sounding coatings are used in the engine to cut weight and friction.

You’ll notice that the new bike’s nose is dominated by a central air intake – looking remarkably similar to the mock-up we published more than a year ago. That duct rams air into the engine’s airbox via a hollow steering head. Honda has even given the 2020 CBR1000RR-R a keyless ignition system to allow it to remove the ignition barrel that would otherwise share that space. Massive 52mm throttle bodies gulp air from that airbox, up from 48mm on the old bike, and the exhaust is dealt with by a free-flowing system co-designed by Akrapovic and incorporating a patent-pending power valve.

Electronics include all the kit you’d expect from a range-topper; three riding modes, a six-axis IMU, nine-mode traction control and launch control are standard, while the SP also gets an up/down quickshifter. 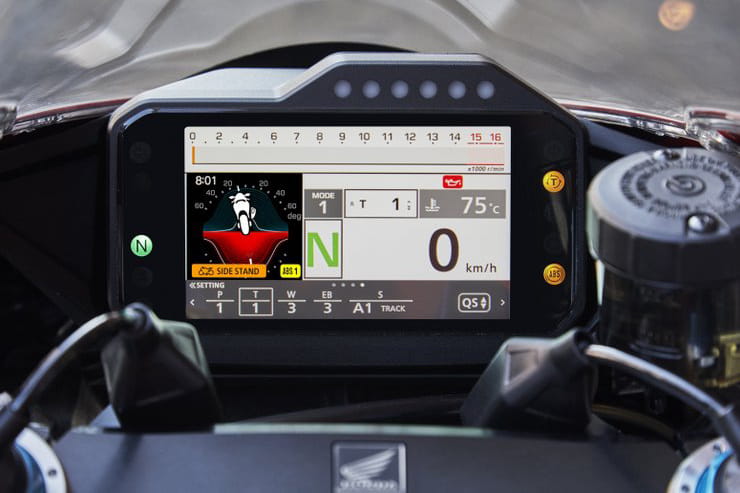 With a new engine, it only makes sense to use a new frame as well. The CBR1000RR-R’s features a completely revised mix of rigidity and flex compared to its predecessor, with 18% more vertical stiffness and 9% greater torsional strength but 11% less horizontal rigidity. The intention is to maximise feel for the rider.

Wheelbase grows from 1405mm to 1455mm, wet weight rises 5kg from 196kg to 201kg. At the back, there’s a new swingarm and the rear shock’s top mount is a bracket on the engine rather than part of the frame.

The base model uses Showa BPF forks and a Showa BFRC-Light rear shock, with Nissin brakes. Here’s where the SP’s biggest change comes – it gets Ohlins electronic control suspension at both ends allied to Brembo Stylema stoppers.

The Blade’s bodywork clearly demonstrates the huge aerodynamic strides that Honda has taken since its last major revamp. A trio of winglets hides behind the outer fairing panel on each side, creating – it’s claimed – as much downforce as the 2018 RC213V MotoGP bike. Although not movable, these are very much like the design revealed in Honda’s recent active-aerodynamics patent, so don’t discount the idea of active versions in future.

Further back, the tank is shaped to let riders tuck in better and cut-outs either side of the windscreen are claimed to let the bike roll and yaw more easily. The bellypan is more enclosed than any rival and runs right back to the rear wheel, where it’s shaped to deflect air and water away. Honda claims the result is best-in-class aero, with a drag coefficient of 0.27.

On board, a colour TFT offers all the information you’d expect and some you wouldn’t – notably a graphic representation of lean-angle. Honda’s ‘Smart Key System’ means there’s no ignition key and the steering lock is electronic.

Although the proof will be in the riding and in the race result, on paper the 2020 CBR1000RR-R seems to have an advantage over its rivals that hasn’t been seen on Blade since the 1990s. Worthy of an extra ‘R’? Without a doubt. 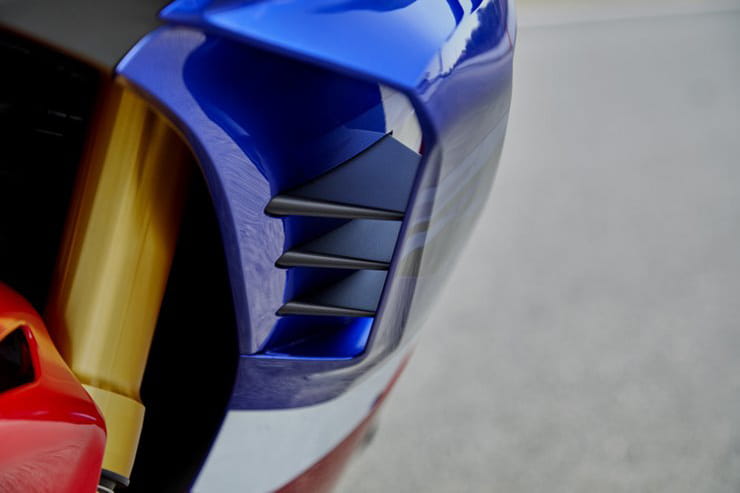