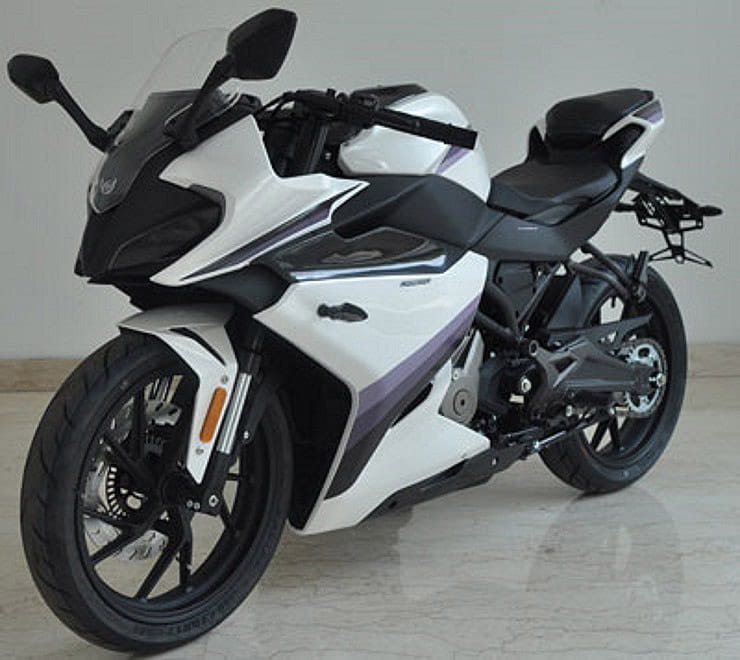 If we told you the bike you see above was built by a Japanese company or even a boutique Italian brand it would be easy to believe. But in fact it’s from China; this is CFMoto’s new 250SR sports bike.

You’re not meant to have seen it yet. CFMoto hinted at its existence earlier this year with a demonstration of a race-spec, faired sports bike based on its 250NK and photos of prototypes emerged more recently, but this is the finished thing. The picture comes courtesy of a type approval application in China and shows the bike in showroom-ready form.

Tech-wise, the bike is based on CFMoto’s £3k, 250NK single-cylinder naked bike. That means there’s a 26hp, 249cc engine mounted in a tubular steel frame. The 1360mm wheelbase is unchanged and the bike’s kit includes J.Juan brakes, USD forks and LED lighting all round.

The impressive styling comes courtesy of CFMoto’s ties with Kiska design, which is better known for styling the last few generations of KTM bikes. But where KTMs follow a distinctive, angular look that sometimes comes at the cost of real beauty, the latest CFMoto models have a more traditionally attractive appearance.

Where the naked 250 weighs in at a scant 150kg, the faired model comes in at 165kg, ready-to-ride, and no doubt it’s going to cost a little more as well – although given CFMoto’s competitive strategy we’d expect something in the region of £3500 when the model is officially launched and reaches the UK.

The bike is part of a 2020 range that’s promising to be significant for CFMoto. Soon the company is expected to unveil a new 700cc parallel twin naked bike, which we first scooped back in June. What’s more, the firm – which already builds KTMs for the Chinese market and will soon make the Austrian firm’s parallel twin models – has struck a deal to use a new version of KTM’s LC8 V-twin engine. That means it will be in a position to create a production version of the V.02-NK concept that was revealed back in 2017.