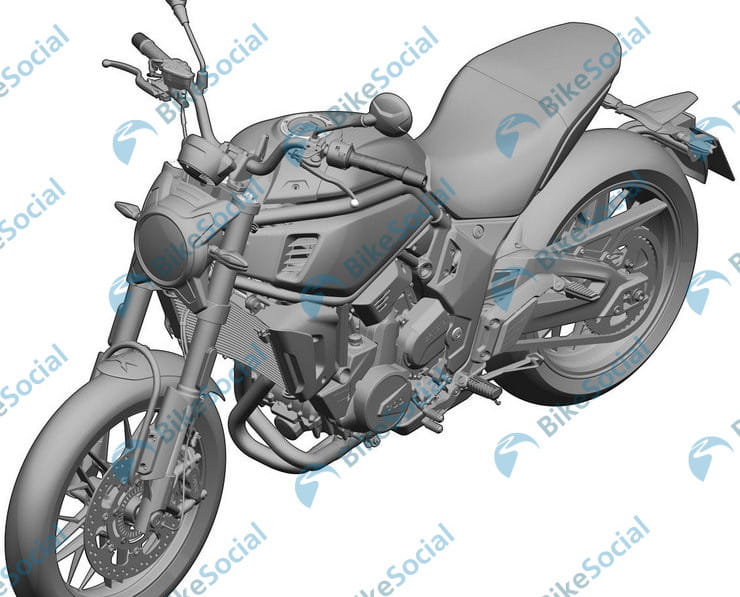 Of all China’s motorcycle firms CFMoto has made the greatest inroads into parts of the market normally dominated by established European and Japanese manufacturers. Now leaked patent images of a forthcoming 700cc parallel twin model suggest it’s going to give its rivals even more to worry about.

The bike has yet to be officially confirmed, but the rendering submitted to patent authorities to gain intellectual property rights on its styling suggest its design is 100 percent complete. They show a remarkable level of detail and an equally impressive level of attention to detail in the design, eschewing typical Chinese tactics of using off-the-shelf components wherever possible to save cost and instead featuring bespoke components that give the bike a cohesive look that’s on a par with models from Europe or Japan. 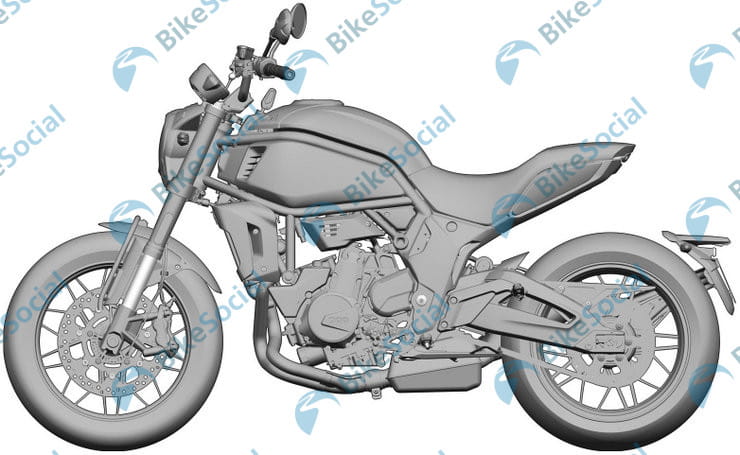 At the moment, all CFMoto’s biggest models – the 650NK naked bike, the 650MT adventure tourer, the recently-released 650GT sports-tourer and the 650TR tourer – share the same 650cc parallel twin and tubular steel chassis. Both the engine and chassis of those models owe a debt to Kawasaki, with notable similarities to the original ER6 components. But with this new 700cc bike CFMoto seems to be striking out on its own.

The engine still uses the same bottom end as the current 650 motor, but the “700” logo cast into the left hand side leaves no doubt as to its increased capacity. That should push power north of 70hp and put the new CFMoto into direct competition with the hugely popular Yamaha MT-07. For some reason the cylinder head is missing on most of the design images; either an oversight or perhaps a suggestion that there are still changes to be made here.

The frame is completely new. Still a tubular steel design, it’s a distinctive-looking piece of work, particularly in the way it shows off the main upper tubes as a part of the bike’s styling. At the back there’s a neatly sculpted aluminium swingarm, with a rising-rate rear shock instead of the direct-action shock of the existing 650cc models, while the front features upside-down forks and a single radial brake caliper.

It all adds up to a machine with the appearance and the on-paper equipment to go toe-to-toe with any rival in its capacity class. 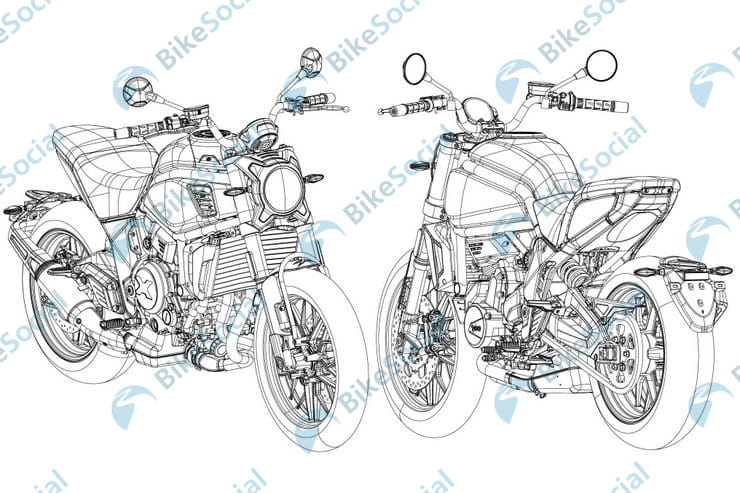 CFMoto’s recent styling efforts have marked a huge step forward for the firm, thanks in part to the firm’s decision to use the services of KTM’s favoured styling house, Kiska.

It’s not clear whether Kiska had a hand in this 700cc bike, but it’s an impressive-looking machine with a particularly aggressive stance, reminiscent of the Ducati Diavel’s front-heavy attitude. Not that it’s a copy of the Diavel; it’s simply making use of current styling trends including the short seat unit and slim headlight set well back into the forks, plus details like the swingarm-mounted licence plate bracket.

There appears to be an ‘X’ theme to the bike – the letter features on the right hand side of the engine and more subtly in the headlight surround and the backs of the mirrors. Could it be going under the name “700-X” or “X-700”? Don’t bet against it.

We do know that its internal code name is simply 700-2, which further confirms its capacity and also heavily hints that there’s at least one other bike in the pipeline based on the same engine.

The bike’s likely introduction in 2020 will coincide with a huge expansion for CFMoto. The already has a deal with KTM that sees it assemble KTM-branded bikes for the Chinese market, and it’s due to take on far more extensive manufacturing responsibilities for KTM next year. Among other things, the Chinese firm is due to take on the responsibility for manufacturing KTM’s ‘790’ models including the LC8c parallel twin engine.

The KTM tie-in also extends to the Austrian firm’s big V-twin machines. In late 2017 CFMoto showed a concept bike, the V.02-NK, using a variant of KTM’s LC8 V-twin engine. Word is that CFMoto now has a deal with KTM to manufacture and use that engine for future models, so we could see the firm competing in the 1000cc-plus market in the near future.

All in all, the chances that a Chinese bike will be on western riders’ shopping lists in the future have just gone up a couple of notches.