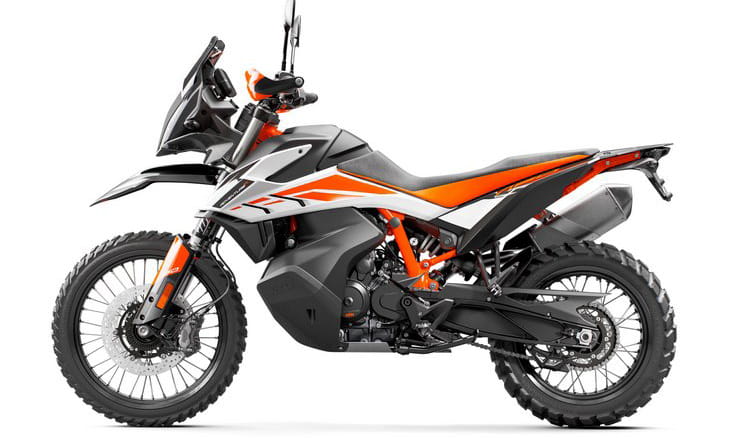 It’s been a relatively quiet year for KTM when it comes to new model launches but the firm has used Milan’s EICMA event to unveil one of the most hotly-anticipated bikes it’s made in years – the 790 Adventure. 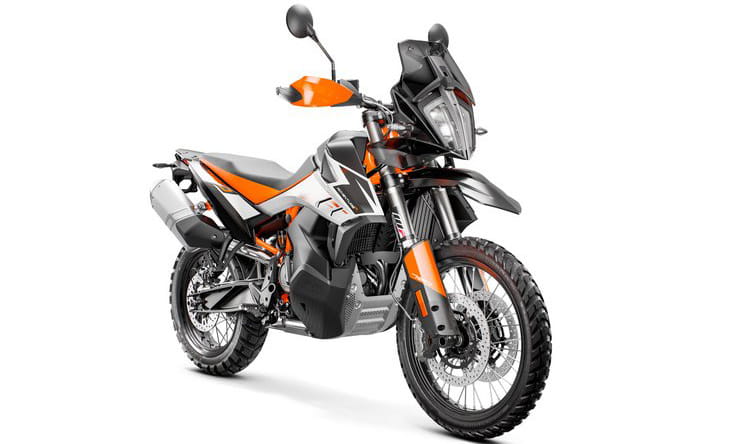 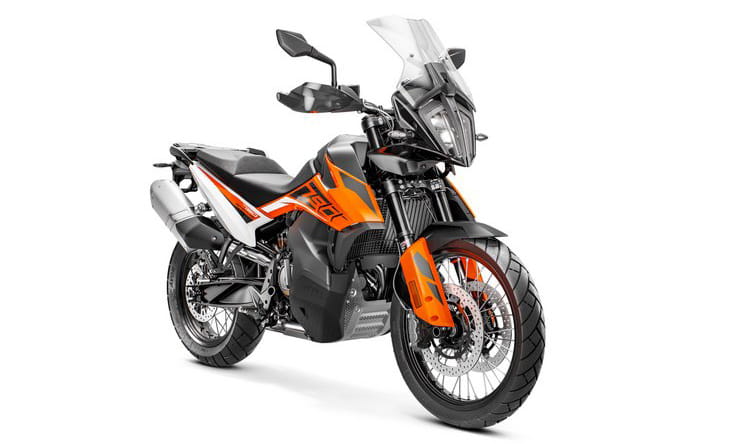 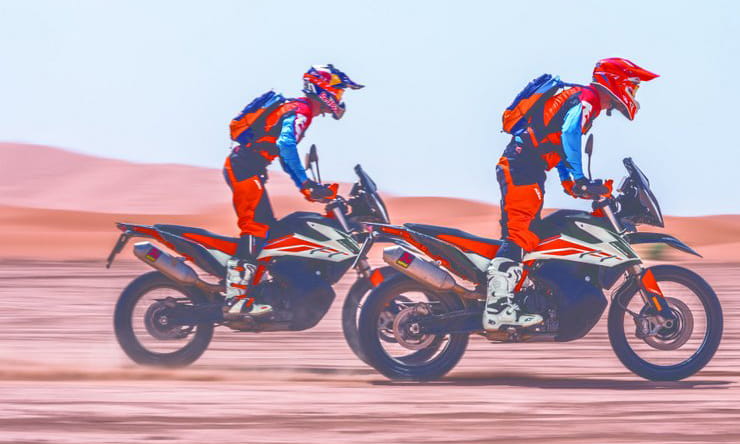 There was no surprise in seeing the new KTM 790 Adventure at EICMA – the firm showed it as a concept a year ago and we’ve already seen the prototypes here and here – but even so it’s a machine that might take some wind out of the sails of the Yamaha Tenere 700 that appeared yesterday and the BMW F850GS Adventure that was unveiled this this morning.

Like its rivals, the 790 Adventure is a parallel twin, using the same 799cc ‘LC8c’ engine that powers the impressive 790 Duke but mixing it with an off-road adventure bike style that’s one of KTM’s specialities.

Two versions have been added to the 2019 range. There’s the base 790 Adventure, with road-biased tyres and 200mm of travel from it WP APEX suspension, with 43mm USD forks. For more adventurous riders, there’s a higher-spec 790 Adventure R using knobblier Metzeler Karoo 3 rubber and 240mm of travel from WP XPLOR suspension at each end, with 48mm USDs and a PDS rear shock.

Both models offer 280 miles of range from 20 litre fuel tanks, and use 21in front and 18in rear rims suited to a wide range of road and off-road tyres. In terms of electronics, the existing 790 Duke already set a benchmark for its class, featuring cornering ABS and traction control, and the 790 Adventure models follow suit, adding an off-road model that disengages the ABS. A full-colour TFT screen tells you which of the riding modes you’re in and pairs with your smartphone to receive calls and listen to music. With an optional app, it can also work as a turn-by-turn GPS – a theme that’s been apparent on a large number of 2019’s new bikes revealed at both the Intermot and EICMA shows over the last few weeks. 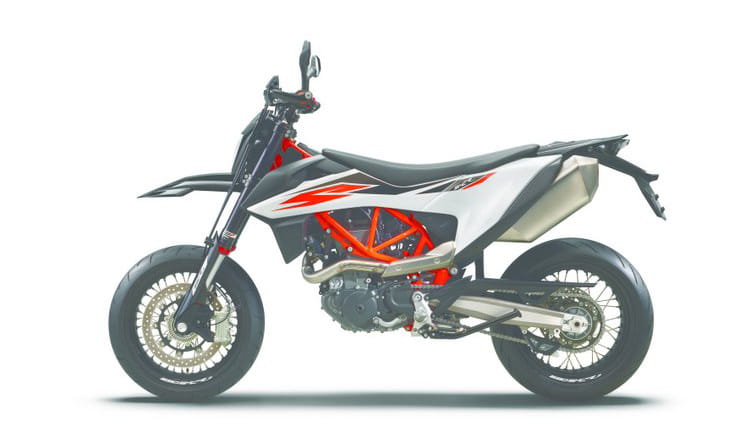 The fad for road-going supermotos might have petered out a decade ago but there’s still a hard-core of riders who enjoy their wieldy nature and KTM’s 690 SMC R has got to be a tempting option if you’re one of them.

Updates for 2019 see the bike get the latest version of KTM’s LC4 single-cylinder four-stroke engine, with 73bhp rather than the old model’s 66bhp and smoother delivery, while a 13.5 litre fuel tank – up from 12 litres – means you can go further between stops. The tank itself also acts as a stressed member in the chassis, improving its rigidity for better handling.

Two riding modes – Street and Sport – are available at the touch of a button, while cornering ABS and lean-sensitive traction control are valuable new additions to the electronics suite. A quick shifter is also included, while KTM’s Supermoto ABS allows you to lock the rear wheel on the way into corners.

New bodywork and improved ergonomics include a more comfortable seat, while there’s the option for a 40mm lowering kit if your legs can’t stretch to the stock 890mm seat height. WP suspension is used at both ends, of course, with 48mm APEX forks that separate rebound and compression damping, with one fork leg dealing with each. Both are adjustable.

As well as the full-power version, KTM can restrict the bike to 47bhp to suit A2 licence holders simply using an electronic tweak, with no physical changes to the motor. 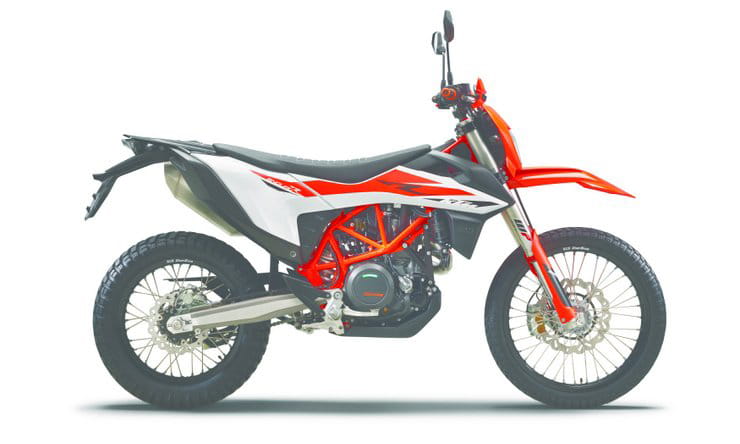 Given the updates to the 690 SMC R, there’s little surprise to see that the closely-related Enduro R is also revised, gaining most of the same changes.

Like the supermoto, the Enduro gets the latest 73bhp engine, straight from the 690 Duke, and the larger 13.5 litre tank that also acts to add rigidity to the new tubular steel chassis.

In place of the SMC’s 17in wheels, the Enduro gets a 21in front and 18in rear rim, with Mitas E07 rubber. It also exchanges the SMC’s WP APEX suspension for WP’s XPLOR kit, with more travel – 250mm at both ends compared to the SMC’s 215mm front, 240mm rear movement.

The Enduro’s two electronics modes are Street and Offroad, while the bike features off-road ABS that allows the rear wheel to lock and reduces the front ABS action. Like the SMC, the Enduro gets a quick shifter that works on both up and down-changes, and thanks to an IMU as part of the Bosch 9.1 ABS system, the brakes and traction control work in corners as well as in a straight line.