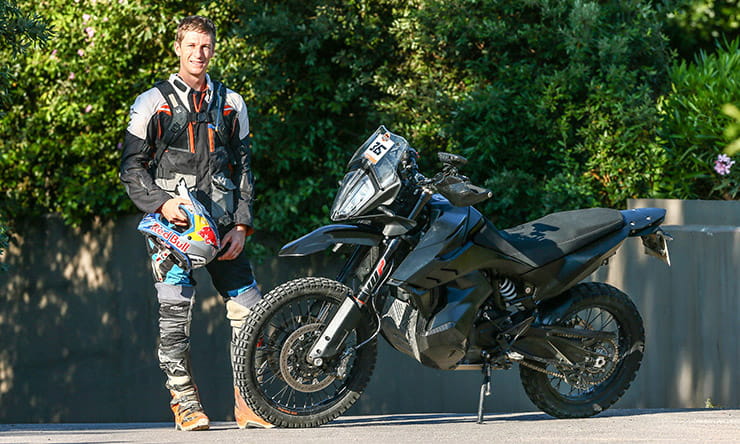 KTM’s 790 Adventure R, due to be officially unveiled at the Milan bike show this November, got its first public outing at a recent KTM European Adventure Rally event in Sardinia. After months of teasers and spy shots, which showed several different configurations of bike being tested (including twin and one-piece seats, full hard luggage, high and low front huggers), a production-spec bike was ridden in front of the press by KTM ambassador and ex-Dakar racer Chris Birch. 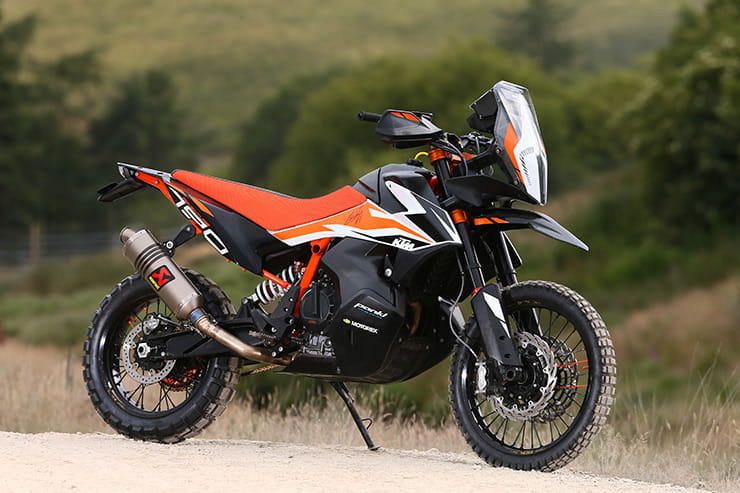 The production-ready demo Adventure R featured few of the premium components that adorn the Rally-style 790 Adventure prototype that’s been doing the rounds at various events since the Milan Show last year – with items such as orange anodised yokes, Excel spoked rims, an Akrapovic system and top-spec WP suspension all absent from the ‘finished’ Adventure R. 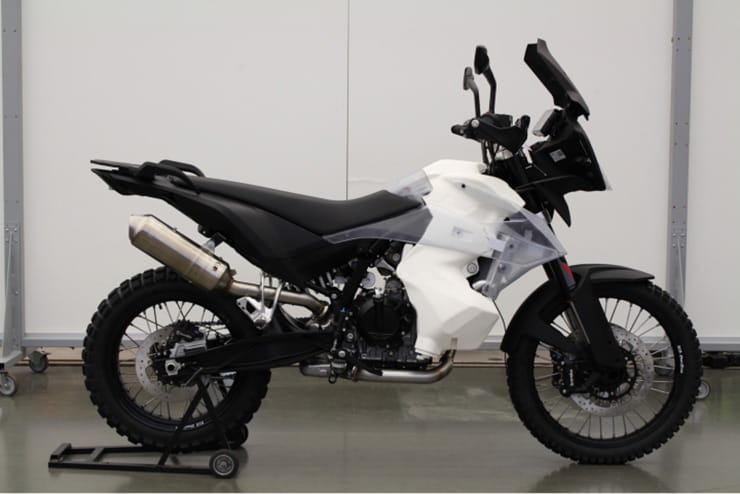 “We’re actually still in the development process,” says KTM Austria’s Luke Brackenbury. “The story behind the bike is about KTM listening to our customers. We’ve got the 1290 R Super Adventure, the 1090 R Adventure... but there’s definitely a market for a lower capacity, lower seat height adventure bike. So this is a reaction to that.”

KTM says the 790 Adventure R was developed alongside the factory’s current 450 Rally project, as well as the existing 790 Duke. “That’s so we could get the ergonomics right and the handling right, to deliver that hardcore off-road experience,” says Brackenbury.

But unlike the 1090 and 1290, which are clearly evolutions from previous LC8-powered bikes, the 790 was drawn on a clean sheet of paper. No further spec is currently available (“No more details will be forthcoming; for now, it’s all eyes on the Milan show in October,” says Luke), but we can make some guesses. And first is to assume the final 790 Adventure R will feature the same basic layout of tube steel frame and 799cc parallel twin motor as the 790 Duke. 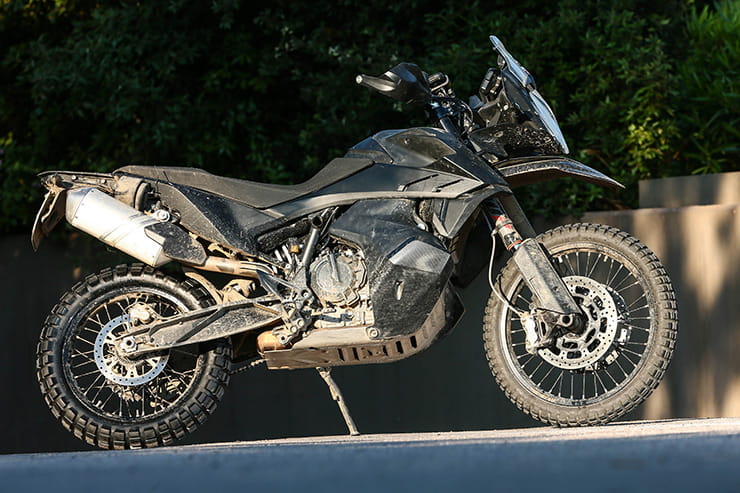 KTM say the Adventure’s tuning has been adapted for less top-end and more low and midrange performance than the pure road bike; the 790 Duke makes an honest 100bhp at the wheel, but it’s a relatively peaky motor with a dip in the torque curve between 4000 and 6000rpm (wheelie fans will note the 790 Duke isn’t a mono-monster; Yamaha’s MT-07 is easier to hoist). Re-tuning the Adventure for a more linear, midrange-rich delivery probably won’t involve major engine changes and will likely come from revised fuelling and ignition timing (although revised cam timing and a heavier crank aren’t out of the question). Expect around 90bhp at the wheel, possibly on longer gearing. 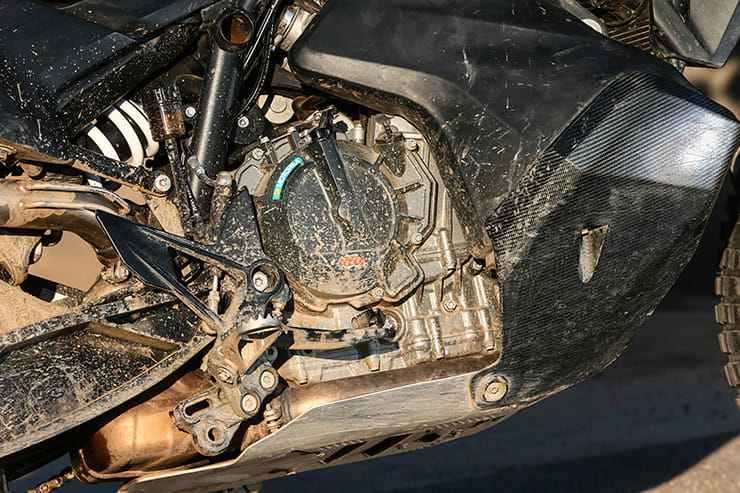 As for the rest of the concept, KTM’s Austria’s Luke Brackenbury reveals how the 790 Adventure R was developed: “We got all the departments – R&D, design, marketing – together and got them to spec the bike they wanted, no idea too ridiculous. We call it ‘idealisation’. Then we look at all those ideas and ask what’s possible; what can we make?”

On the surface, it’s clear there were three design priorities: 1) make the 790 Adventure R a user-friendly adventure bike, with a low seat height, 2) keep enough ground clearance to make it useable off-road, and 3) give it a big tank range. But 1) and 2) are an immediate contradiction, and the space they consume means there’s conventional way to achieve 3).

One of the most instantly noticeable features of the 790 Adventure R is the size and location of its fuel tanks, slung like polycarbonate saddle bags over each side of the motor and jutting proud in front of the rider’s feet. KTM claim a 250-mile tank range for the bike; with the 790 Duke getting 170 miles from 14 litres at 55mpg, to get the Adventure to do 250 miles its tank capacity would have to be around 20 litres – meaning around 15kgs of fuel will straddle the motor. 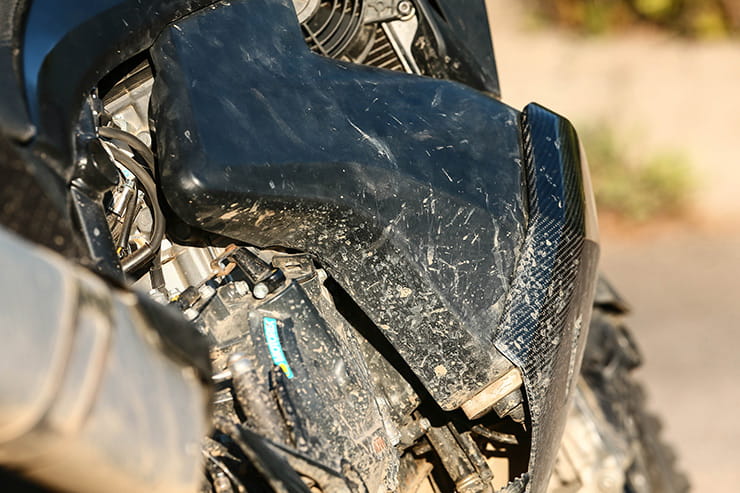 While it’s common for customised rally-style bikes to carry fuel tanks ‘draped’ over the spine of the frame (KTM’s 950 Adventure actually had two separate tanks with their own filler caps, connected by a fuel pump), to see them this large and low is unique. And so much weight carried so low should give the 790 Adventure R a very specific handling dynamic; bikes with a low centre of gravity, typically tourers, have a steady, linear rate of steering, ‘rolling’ into corners – as opposed to the ‘toppling’, high speed steering of bikes with a higher c of g (such as sportsbikes). This, in itself, is a very pleasant, unchallenging style of steering, which lends itself to building confidence with novice riders. 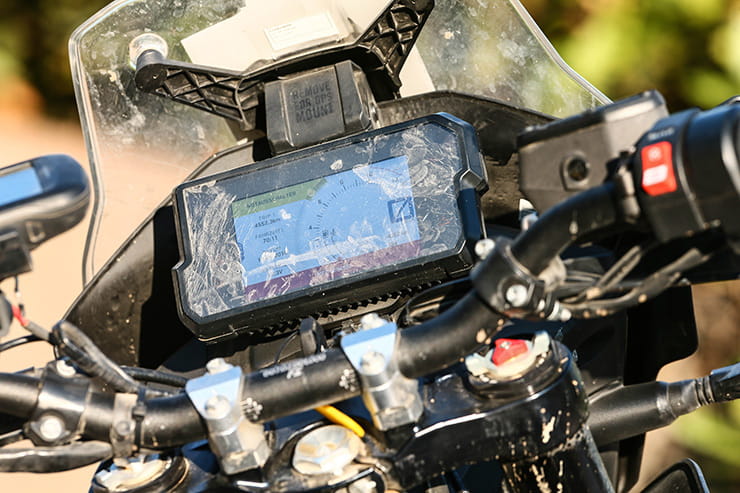 However, low c of g bikes also tend to ‘push’ the front wheel forward under hard braking, rather than ‘squash’ it down into the road; it’s easier to lock the front. It’s a good thing the 790 Adventure appears not to be compromised in its electronics, with traction control and cornering ABS.

The reason the Adventure R has its fuel tanks low and either side of the motor is because there’s nowhere else to put them. With the engine already more compact than any comparable parallel twin (which it has to be, to squeeze a fuel tank either side) plus the design priority of a manageable seat height and good off-road ground clearance, something has to make way if you also want a 250-mile, 20-litre tank. 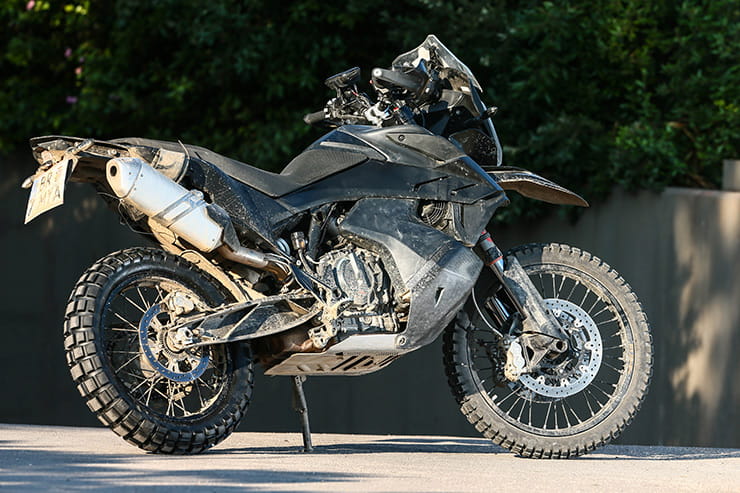 There’s no room to put the fuel under the seat because that’s where the cantilever rear shock sits – and there’s no room for the shock to move onto a linkage and into the swingarm tunnel because that’s where the exhaust’s catalytic converter lives. And the reason the cat is there is because it won’t fit under the motor as usual because KTM want a low seat height combined with good ground clearance. So, basically, the design music stopped and everyone sat down apart from the fuel tank.

Although KTM ambassador and all-round riding god Chris Birch is unlikely to say anything negative about the new bike, he doesn’t sound like he’s towing the company line when he says, “The initial challenge I had with the 790 Adventure was switching my 1090 R brain off; I was riding the 790 with an adventure bike mind-set about how to behave. But it really is a whole different thing. When I first rode the 790 Adventure, testing in the Californian desert, I had intercoms with Quinn Cody, one of KTM’s main test riders. He was riding behind me and I kept braking for things – he was like, ‘Stop braking, you’re being like a pussy, just hit it!’ Everything in my mind was saying, ‘I just cannot do this,’ but the bike was dead straight. It took me a day and half to realise just what a capable off-road bike KTM have made. It really does everything that KTM say it does – and, in the process of making this high-end, hard core off-road adventure bike, they’ve actually made something really learner-friendly. It’s got the low seat height, the overall weight is lower, the centre of gravity is lower; it’s not an intimidating bike to ride. And that means a hard core rider can push it harder and be more aggressive with it.”

But even a rider like Birch is impressed by the 790 Adventure’s tank range: “We did the whole of day two of the Sardinia Rally; started riding at eight am and got home at seven pm; and when I filled up at the end I had a bit of an argument with the lady at the pump. She said she’d only put 10 litres in it, so I had to go outside and check because I was convinced I’d burned at least 16 or 17 litres that day.”