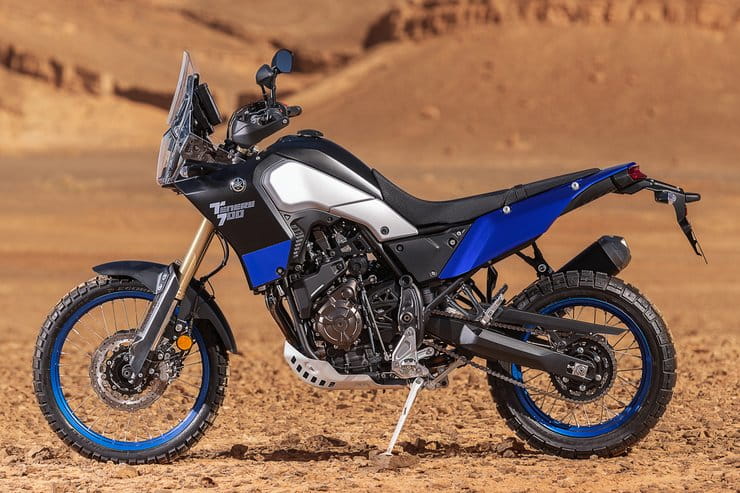 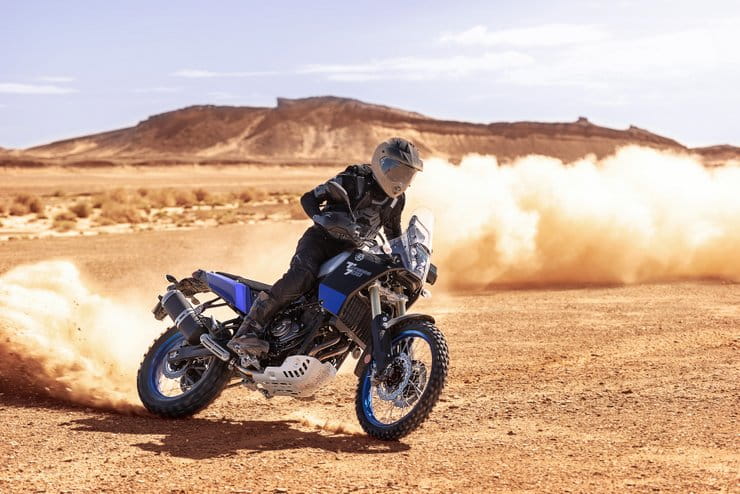 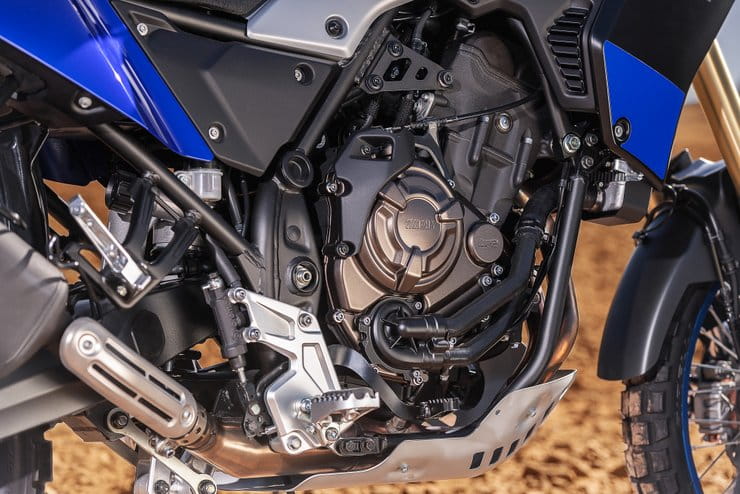 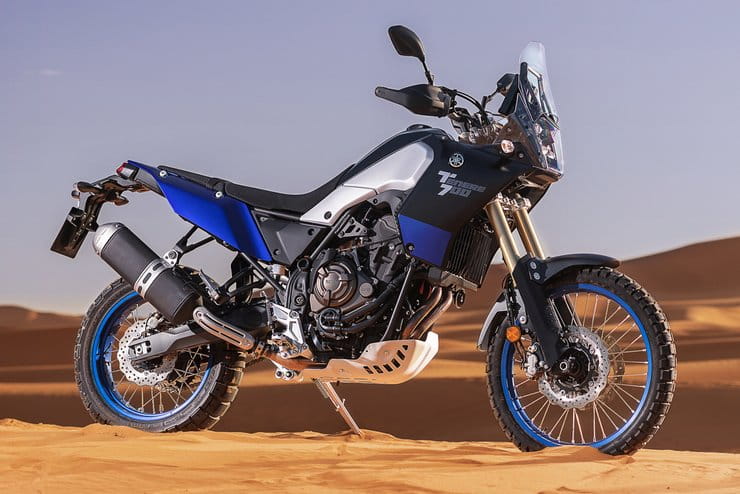 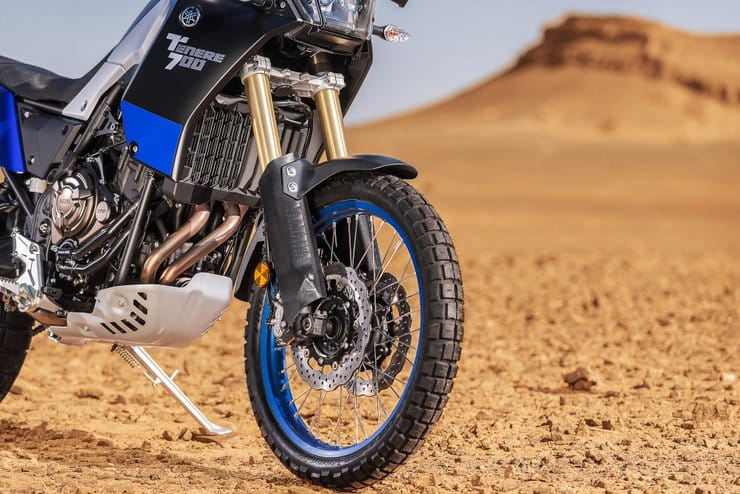 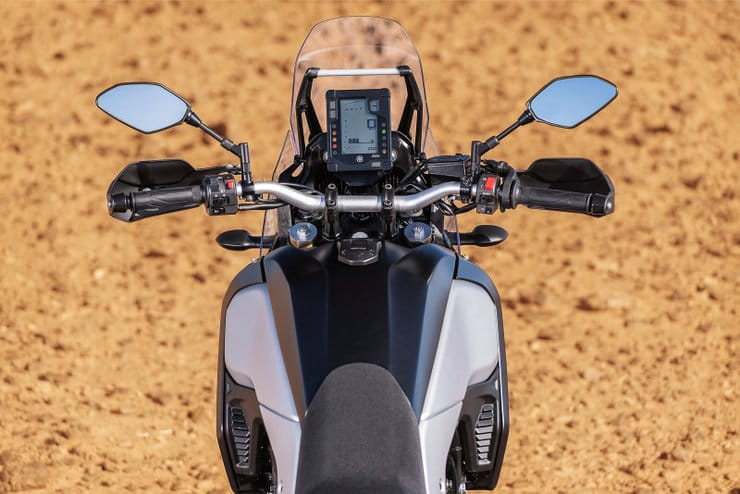 Rarely has a new bike had an introduction as protracted as Yamaha’s Tenere 700. Rumoured almost as soon as the MT-07 was launched in 2014, prototypes were first spied on test in early 2016. Later that year Yamaha showed us the T7 concept, and in 2017 it got closer to production with the Tenere 700 World Raid prototype, which embarked on a round-the-world promotional voyage.

And now it’s finally here, the production-spec Tenere 700 – and it’s basically identical to the World Raid prototype shown 12 months ago. In fact, with the exception of a production-spec, road-legal exhaust can, a fractionally lower seat and some slightly less extreme off-road rubber, visual differences are hard to find.

Technically, the bike is powered by a 72.4bhp derivative of the MT-07’s 689cc parallel twin engine. Tweaks to the powertrain include a Tenere-specific engine map and a different final drive ratio, but other than that it’s the same ‘CP2’ motor that’s familiar from the MT-07. While the 16-litre fuel tank might not be large when compared to some of its rivals, Yamaha says that the engine’s economical tune means you can get more than 217 miles (350km) between fill-ups.

That parsimonious twin is bolted to a completely new steel double-cradle frame that offers a towering 240mm of ground clearance thanks to 43mm upside-down forks and a remote-adjustable rear shock, offering 210mm and 200mm of travel respectively. The 21-inch front and 18-inch rear wheels further emphasise the bike’s serious off-road intentions; Pirelli Scorpion Rally STR rubber is standard, but far more extreme enduro tyres are available in the same sizes.

Yamaha’s decision to stick with the World Raid’s styling means the Tenere 700 has a more convincing, Dakar-rally-style look than most of its rivals. The quad LED headlights behind a clear nose cowling that merges with the adjustable screen and side wind deflectors is straight from the rallye-raid playbook, and even the bike’s instruments – comprising a vertically-oriented LCD screen – look like they’re straight from a rally bike. The horizontal crossbar about the dash means it’s simple to mount other equipment like GPS.

While the twin 282mm front and 245mm rear disc brakes are ABS-equipped to meet EU legislation, the system can be switched off when you’re riding off-road.

Three colours will be offered in 2019; ‘Ceramic Ice’ (the silver seen here), ‘Competition White’ and ‘Power Black’. For 2019, the larger XT1200Z Super Tenere will also get the Ceramic Ice colour option. 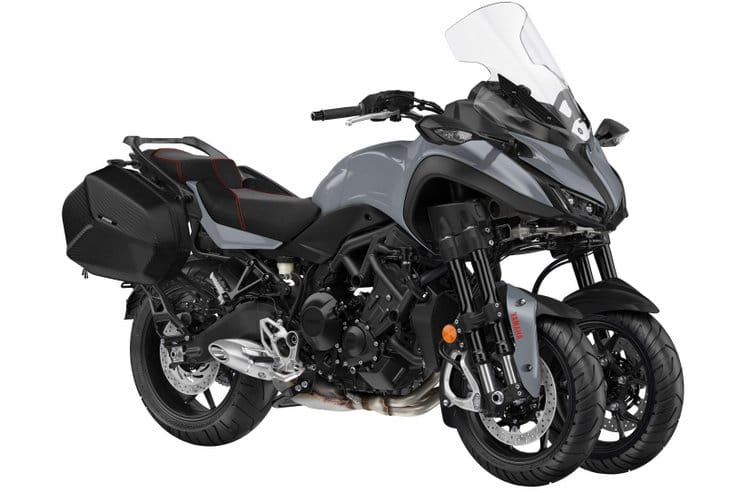 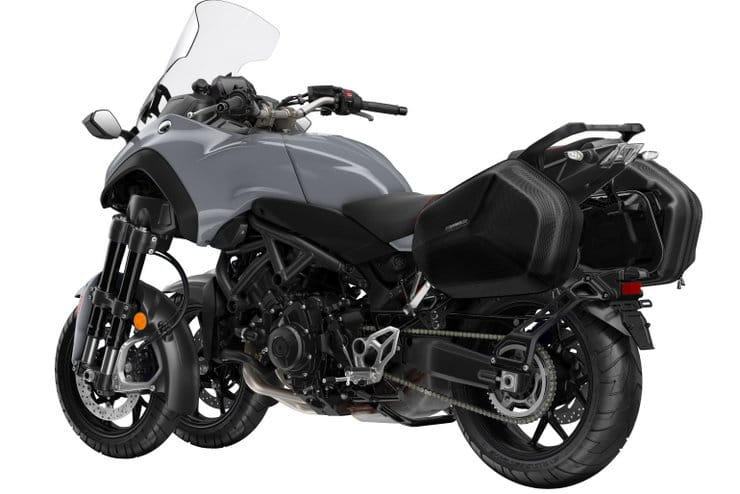 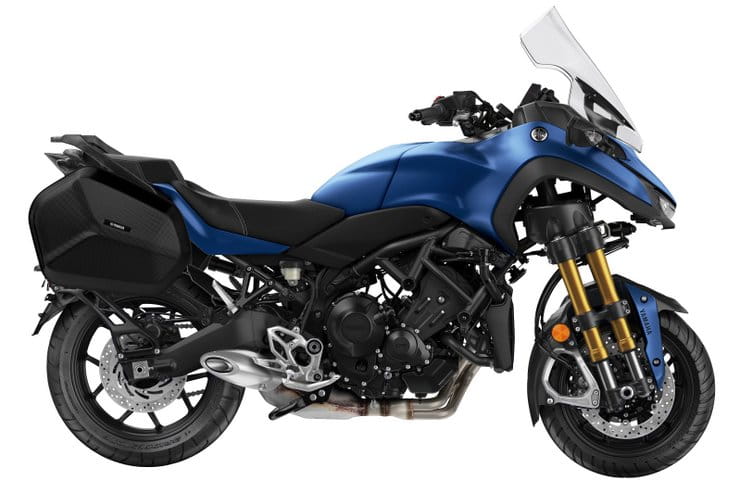 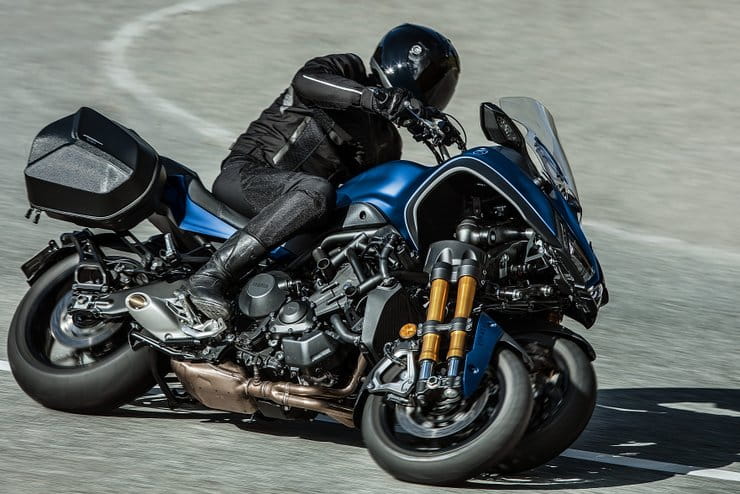 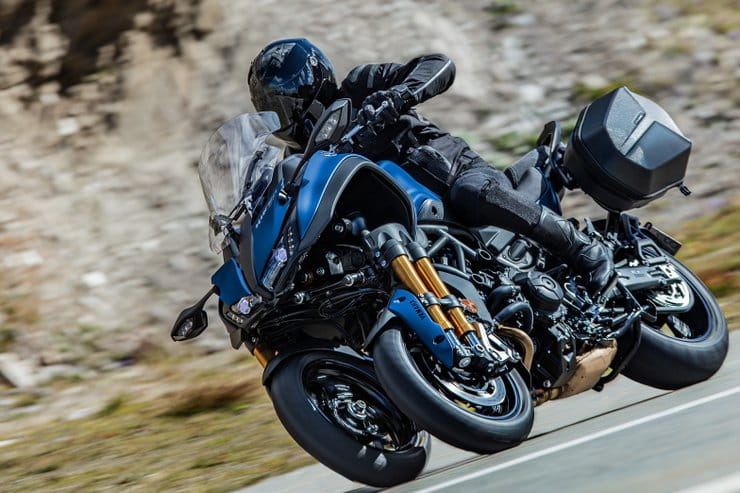 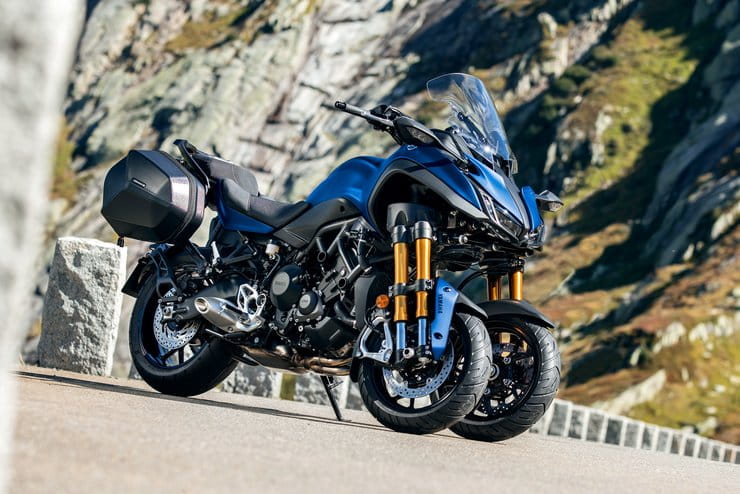 When our very own Michael Mann rode the Yamaha NIKEN this year, he had a few suggestions for Yamaha. In his write-up, he suggested that if the firm added “a taller screen, luggage and touring-friendly touches such as heated grips” then it would become a “highly-competent sports-tourer.”

And it seems Yamaha was listening, because that’s precisely what it’s done to create the 2019 NIKEN GT.

Based on the original, oddball tilting three-wheeled NIKEN, the GT version gains a new, higher screen, a ‘comfort’ seat, heated grips with an on-dash warmth-level display, 25-litre panniers, a rear carrier, a centre stand and second 12v power outlet. Basically, Yamaha has turned the bike into the sports-tourer that it was always crying out to be.

To top it off, the GT comes in two new colours to distinguish it from the normal NIKEN; ‘Nimbus Grey’ and ‘Phantom Blue’.

In the rest of Yamaha’s sports-touring range, the Tracer 700 and 900 will also be offered in the new Nimbus Grey colour, with red highlights. 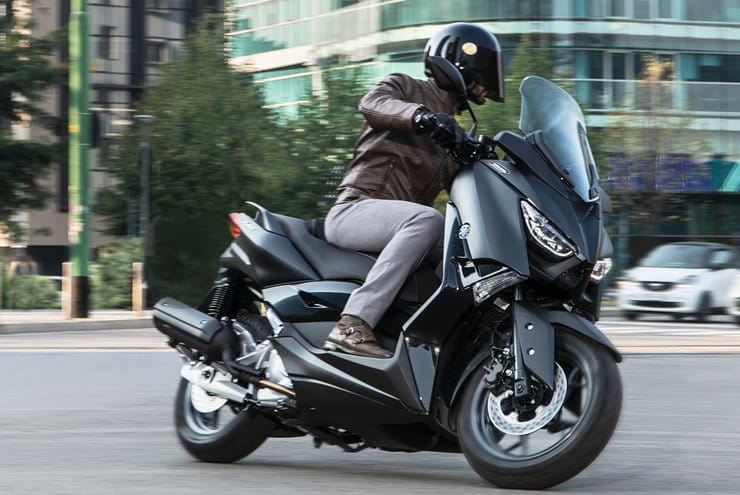 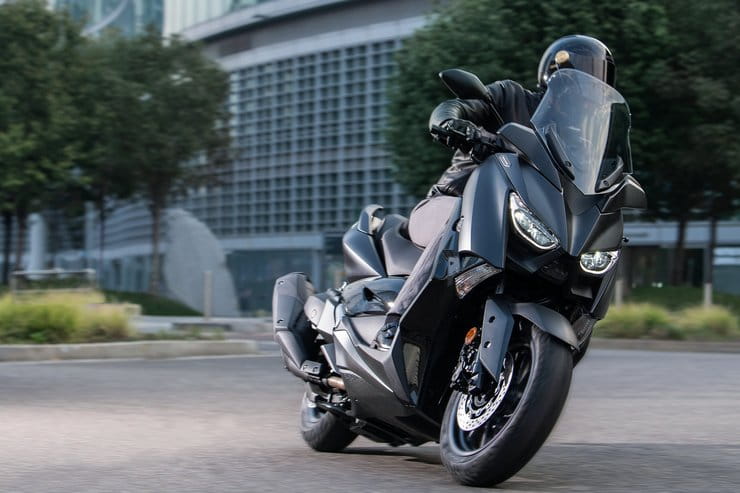 A year on from launching the XMAX range in 125cc, 300cc and 400cc forms Yamaha has added a special edition version – the IRON MAX – that’s available across all three engine sizes.

Elsewhere in the scooter range, there will be new colours for the TMAX DX, SX and SX Sport Edition.