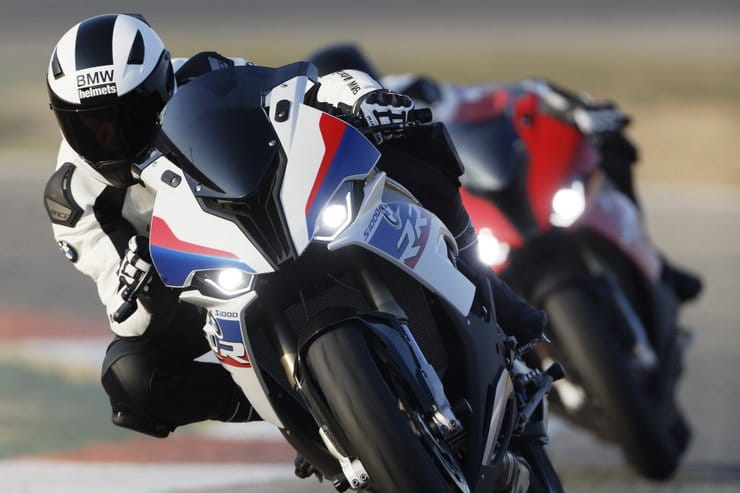 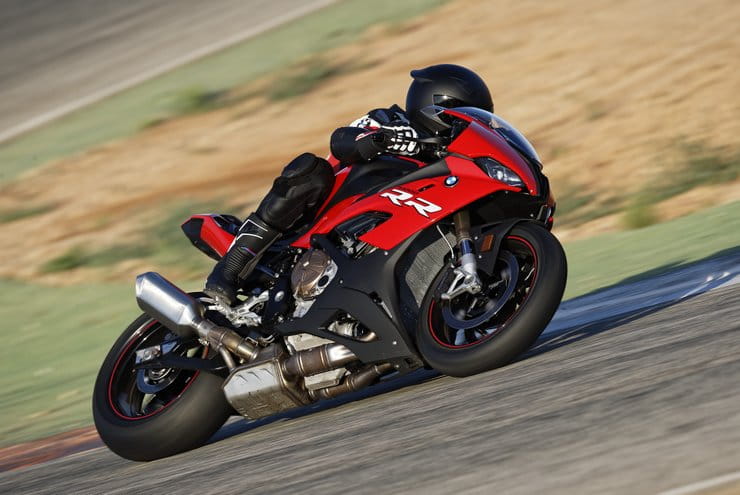 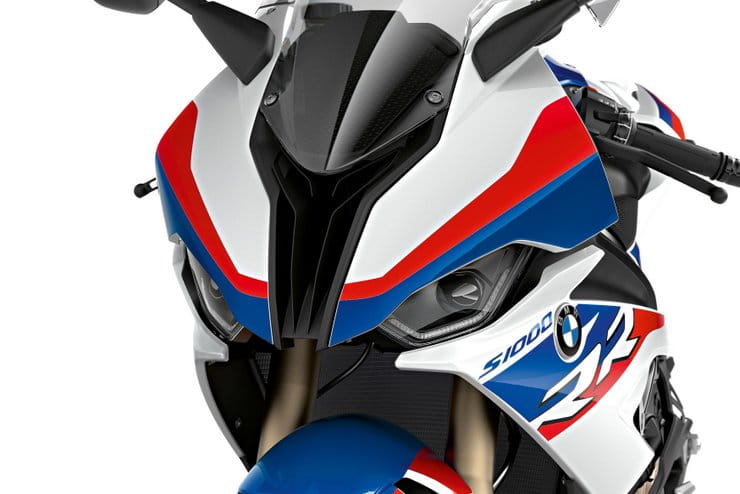 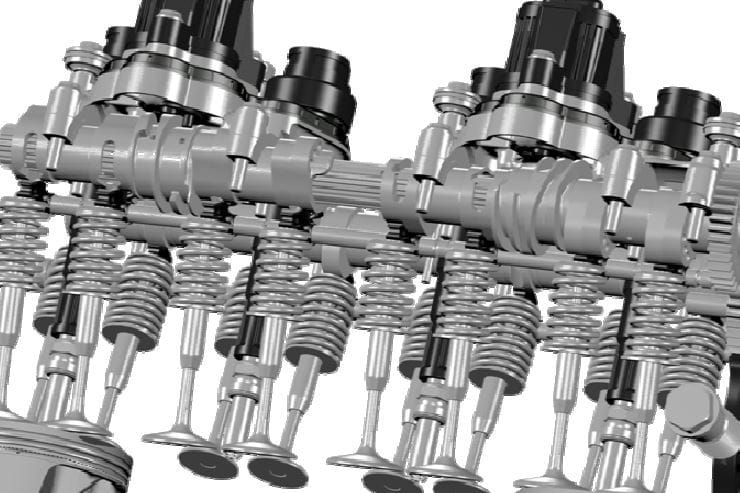 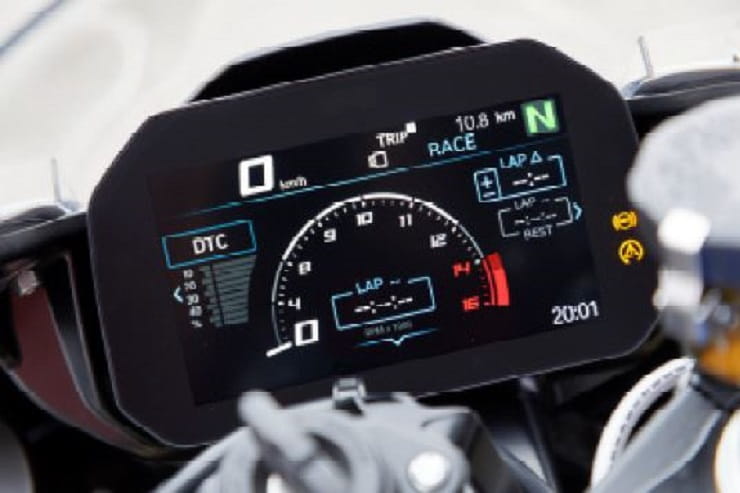 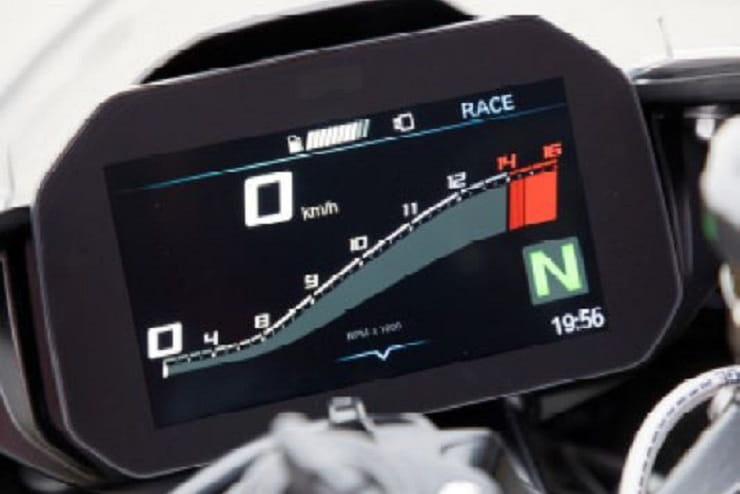 The anticipation surrounding BMW’s 2019 range has been hard to surpass this year. As well as revamping some of Europe’s best-selling bikes – turning the R1200GS Adventure into the R1250GS Adventure – it’s got a completely new S1000RR superbike, new R1250R and R1250RS and a new F850GS Adventure. The Bavarian firm is setting new standards across the board.

When BMW first entered the superbike arena a decade ago, most seasoned industry-watchers reckoned it would take a little while for the German firm to climb up to the established Japanese and Italian benchmarks.

Not a bit of it. That first S1000RR blew us all away with its performance and poise, and it’s just kept getting better since then. BMW might not have chased WSBK titles like some of its rivals, but as a road-going superbike its first attempt hit the bullseye from day one.

So, with all the experience from that first attempt in the bank, just how good will the S1000RR’s successor turn out to be? On paper, at least, it’s a new standard-setter.

And it doesn’t skimp on technology, either. BMW is ushering in an age of variable valve timing and lift with its new ShiftCam system, which first appeared on the new R1250GS, revealed a few weeks ago. Impressively, the firm has also added the ShiftCam to the S1000RR. It’s a clever system that’s far more advanced than the simple phase-shifting variable valve timing setups on bikes like Ducati’s Multistrada or Kawasaki’s GTR1400. It involves moving the camshaft side-to-side to engage one of two different cam profiles – a low-lift, short-duration one aimed at torque and low-rev emissions performance, or a high-lift, long-duration profile targeting peak power. On the R1250 models, it’s relatively simple – each intake cam only has one cylinder’s valves to worry about – but on the S1000RR, with four inline cylinders, it’s rather more complex, as at any one time, at least one cylinder’s inlet valves are likely to be open. The solution is to have two sliding sections on the intake camshaft, sliding on a splined centre. Each section deals with two cylinders, and can slide during the fraction of a second when the inlet valves on those cylinders are closed. The cams shift at 9000rpm.

Despite all this complexity, the new engine is 4kg lighter than the old one. Weight savings come from elements like hollow titanium intake valves and lighter rocker arms, which also allow the engine to rev higher, while the whole engine cases are also much lighter than before, as are many of the internal components.

The engine is operated via a completely electronic throttle, with variable length intake tracts, and breathes through an exhaust system that’s 1.3kg lighter than the old one despite achieving the latest emissions targets with two three-way catalytic converters.

The frame’s new, too, making greater use of the engine as a structural component and reducing the width of the bike. It’s between 13mm and 30mm narrower than its predecessor in different areas, and BMW says its only 20mm wider than a V4-powered bike would be - which intriguingly suggests BMW has also looked quite carefully at the V4 option…

The head angle is 0.4 degrees steeper than before, and the caster is also reduced, but despite the new bike’s tiny appearance its wheelbase is actually 9mm longer than its predecessor. The underslung swingarm follows the latest MotoGP trends; it’s lighter than the old one but also moves the rear shock away from the engine so it’s less affected by engine heat. The forks are new, too; 45mm upside-downers, and there’s the option of electronic damping control.

The lightweight theme continues with wheels that are 1.6kg lighter than the old ones, while the front brake discs are also 0.5kg lighter. There’s ABS Pro, of course, and Dynamic Brake Control which prevents the throttle from being accidentally opened when the brakes are on.

From the rider’s seat, you see a new colour TFT dash with four screen layouts that can show a vast amount of information, up to and including your current and maximum lean angles and braking performances. It also has lap timers and datalogging built in.

The new bike looks very different to its predecessor, too, finally losing the divisive, lopsided headlight layout and adopting a more conventionally pretty style. The new headlights are supposed to be reminiscent of the ‘kidney’ grilles on BMW’s current car range. It’s not just about looks, though; BMW says the new fairing is more aerodynamic.

Of course, there are plenty of optional extras as well. There’s a ‘Dynamic Package’ with electronic damping and cruise control, a ‘Race Package’ with forged wheels, a lightweight battery, an adjustable swingarm pivot and rear ride height adjustment, and the ultimate is the ‘M Package’ which adds Motorsports paint, carbon fibre wheels and a sport seat as well as the Race Package’s chassis tweaks. 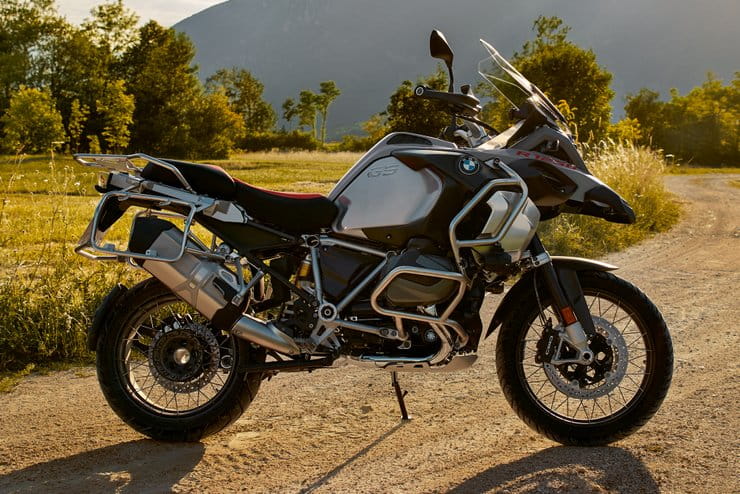 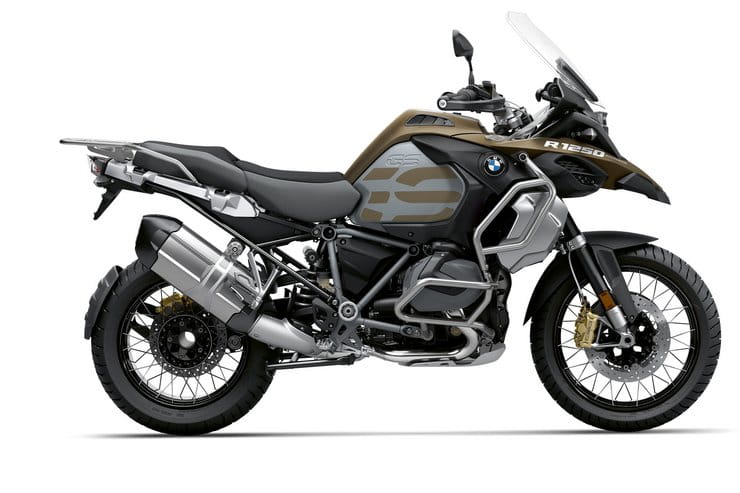 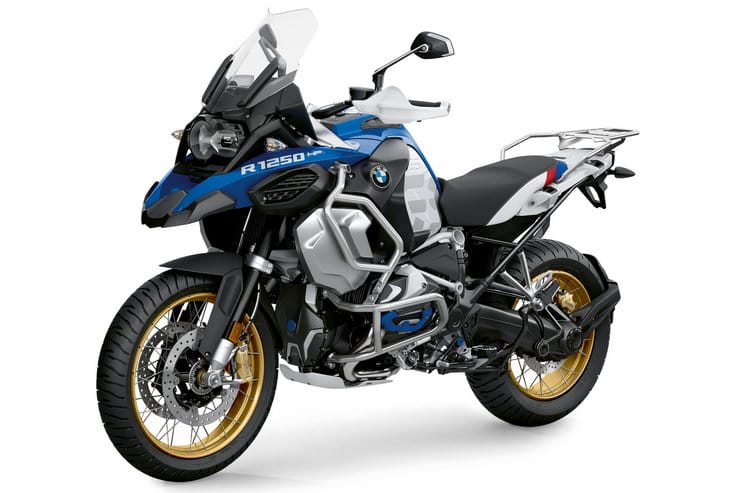 BMW’s new S1000RR might be more attention-grabbing but we’re pretty sure it’s this bike – the new R1250GS Adventure – that more of you will be buying in 2019.

For over a decade now, BMW’s R1200GS has been the UK’s favourite bike, with sales split pretty evenly between the base model and the more extreme Adventure version. And while we saw the 2019 R1250GS a few weeks ago, the firm has held back until now to launch the Adventure.

There aren’t many surprises here. The key change is the engine; BMW’s new ShiftCam, 1254cc boxer twin, which is identical to the one in the new R1250GS and R1250RT. It’s a huge step forward from the old motor, with variable valve timing and lift and a significant power boost from 123bhp to 134bhp. The torque increase, up from 92lb-ft to 105lb-ft, is even more impressive.

Engine aside, the changes are more a case of tweaking and honing than out-and-out redesigns. There’s a new adjustable-height seat on the Adventure, and an LED headlight, plus revisions to the body panels.

On board, there’s a multifunction TFT display with Bluetooth connectivity, including arrow-based navigation via the free BMW Motorrad Connected phone app.

As usual, there are a couple of versions of the Adventure to choose from. As well as the basic model, there’s an Exclusive variant and the HP model – which is likely to go under the name ‘Rallye’ in the UK – with a shorter screen, gold wheels and brakes and the Rallye seat. 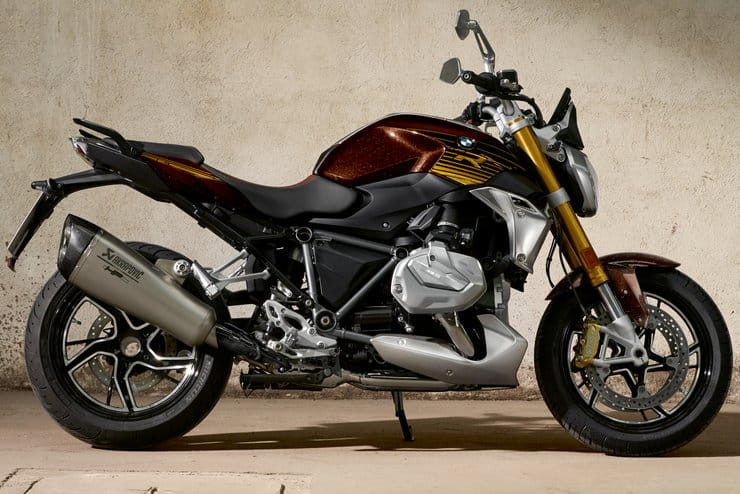 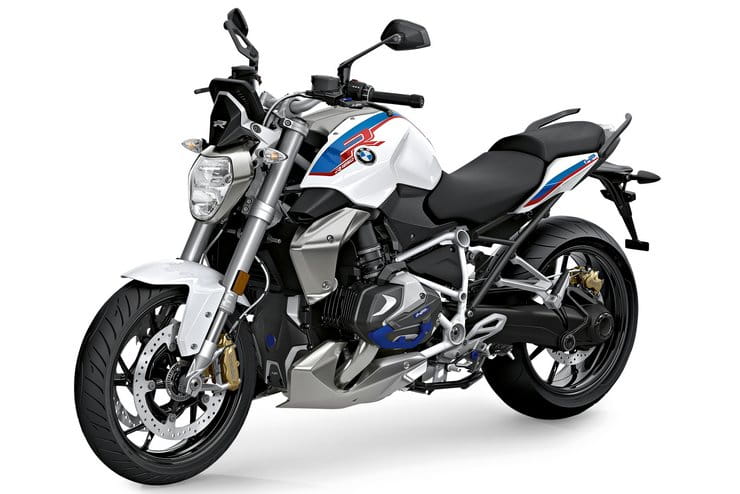 The engine spec is the same as the rest of the range – 1254cc, variable valve timing and a worthwhile power boost to 134hp – and other changes like the new TFT dashboard are also added to the R.

Other changes from the old bike are few and far between. There’s a new bellypan, new radiator trim panels and a new element above the headlight to blend into the TFT display, but other than that it looks much like last year’s model. An ‘HP’ version of the bike, with BMW Motorsports colours of white, blue and red, is also in the line-up, featuring gold brake calipers and gold or silver fork tubes. Meanwhile, the R1250R Exclusive gets a matte black engine with grey cylinder head covers and a grey frame with black subframe. It also gets an embossed seat and gold brake calipers. 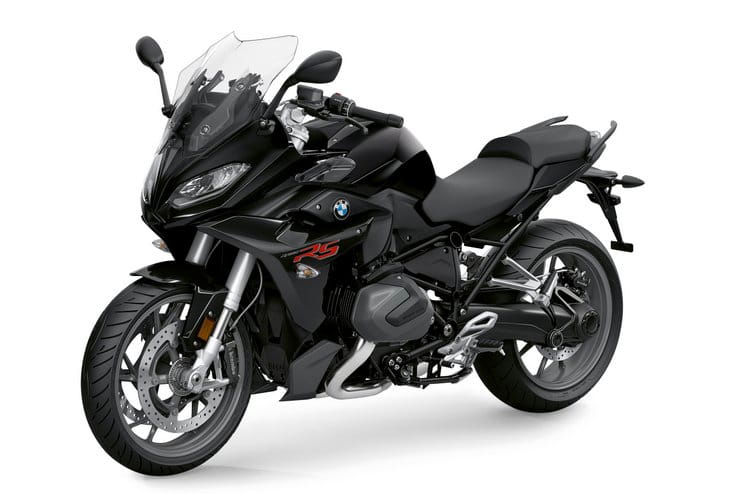 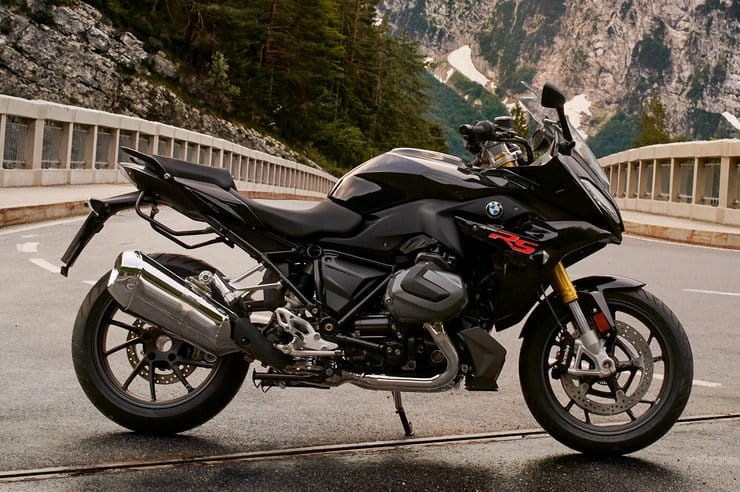 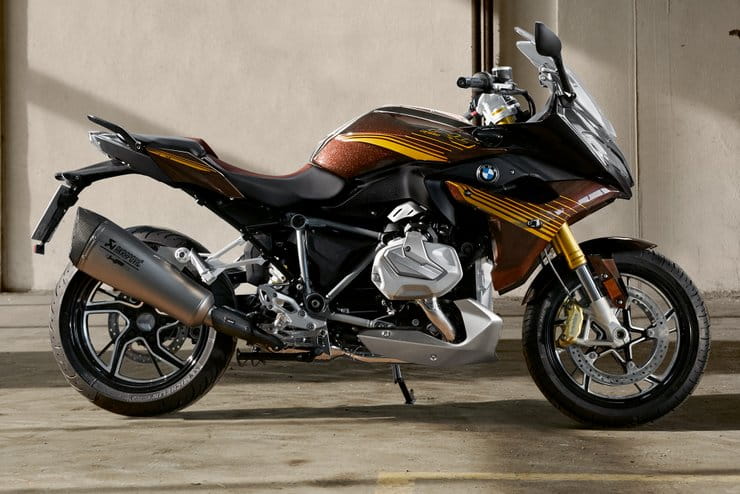 The faired R1250RS is, as you’d expect, heavily based on the R1250R naked bike and benefits from exactly the same mechanical changes, centred on the new ShiftCam 1254cc engine with 134hp.

However, unlike its naked sibling, the RS also gets a noticeably new look. The key change here is the adoption of LED headlights that are far smaller than the old bike’s halogen lamps, giving the nose a completely fresh appearance. While the side panels, tank and seat are unchanged, a new engine spoiler nearly reaches up to the side panels, giving the RS the look of a fully-faired bike rather than a half-faired one.

As on the R, there’s a base model, available in black, plus an ‘Exclusive’ version in blue with grey highlights. Meanwhile the R1250RS Sport comes in metallic yellow with a white frame. There’s also a special ‘Option 719’ finish in ‘Stardust Metallic’ (that’s sparkly brown to you and me), available on both the R and the RS, with gold and glass flakes mixed into the paint. 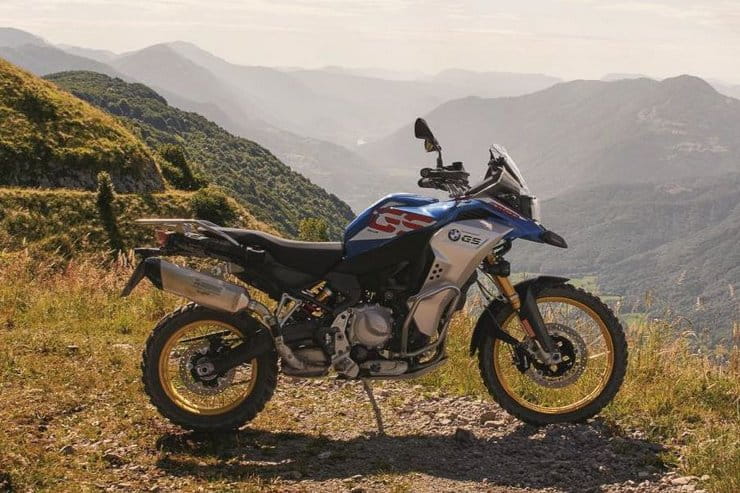 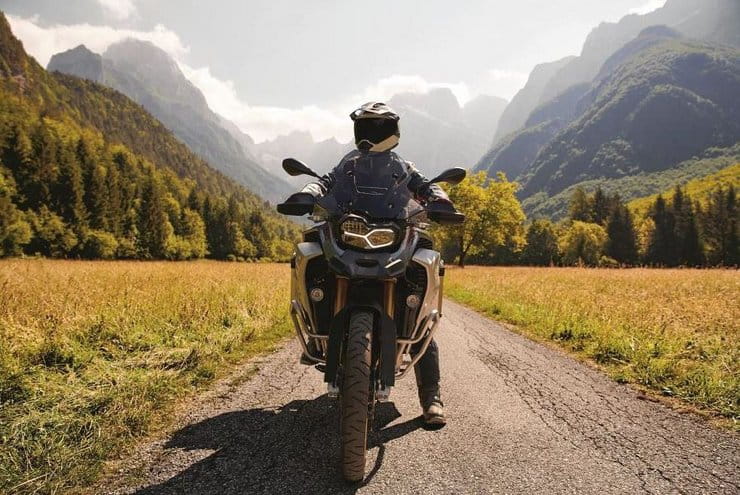 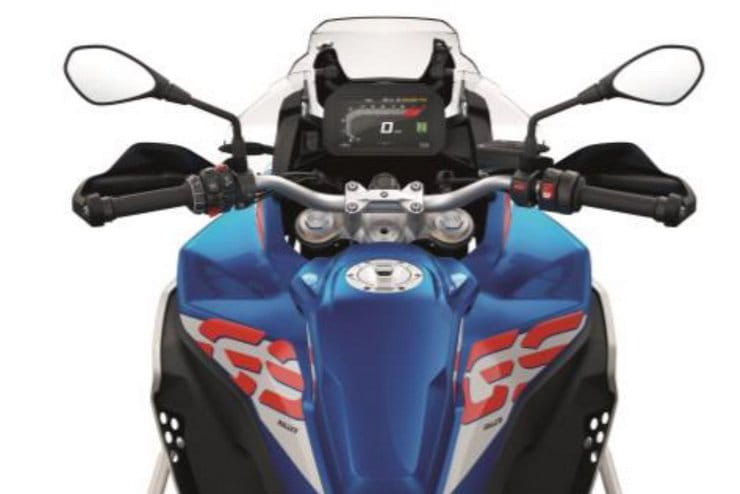 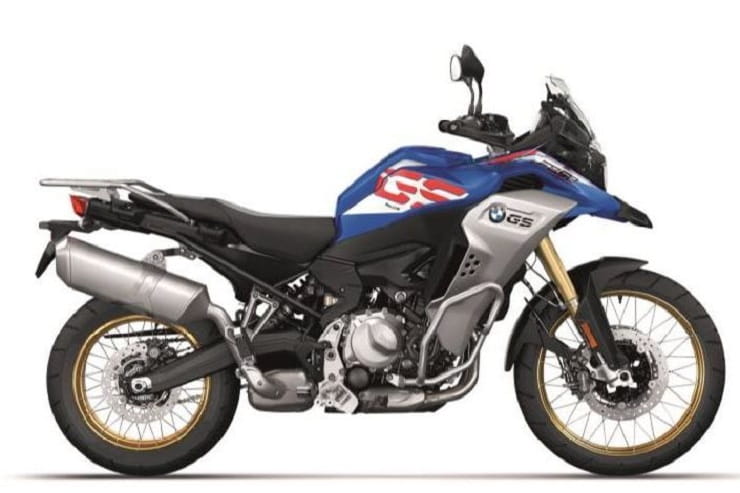 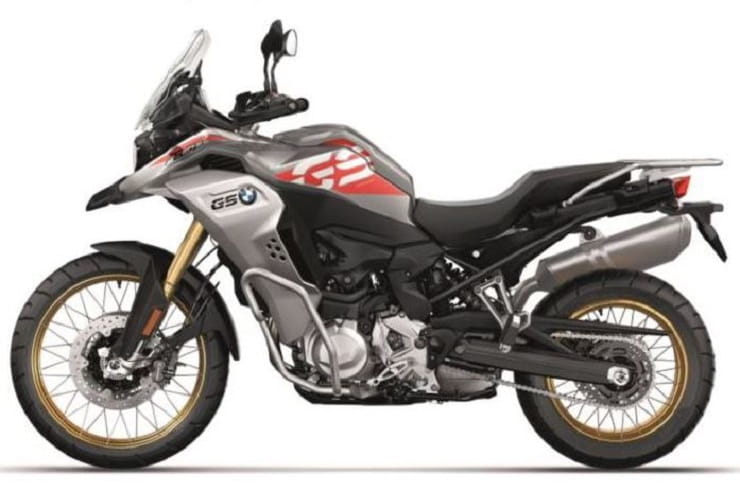 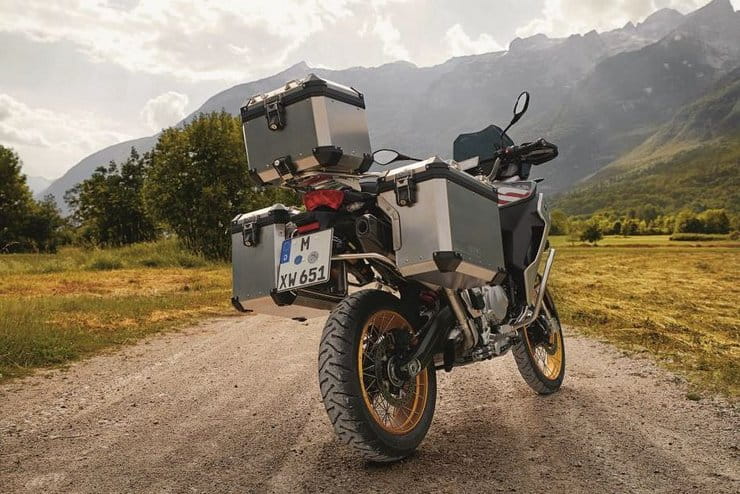 It’s been a year since BMW unveiled the all-new F850GS, powered by the firm’s latest parallel twin engine, but until now the off-road-inspired ‘Adventure’ version has been stuck in the past with the old F800GS as its basis.

Now, at last, BMW has unveiled the F850GS Adventure. Of course, we already knew this bike was coming, and as long ago as June we scooped the specs on the new model. But now it’s here, and it looks like a tempting alternative for anyone who’s finding that the ever-growing R-series GS is just too big.

It’s based on the same steel frame as the F850GS, but features a larger 23 litre fuel tank (up from 15 litres) mounted conventionally in front of the rider, unlike its under-seat position on the old F800GS. Compared with the F850GS, the Adventure gets new styling with deep side panels, a larger, adjustable screen, enduro footrests, engine bars and a stainless steel luggage rack. As on most of BMW’s 2019 range, the instruments are a 6.5in TFT screen, with Bluetooth connectivity.

The bars are 15mm higher, with adjustable levers, but the seat height is 15mm lower than its predecessor at 875mm, and can be dropped as far as 815mm with a low seat option.

As on the larger R1250GS Adventure, there are two additional versions – a Rallye model in blue and an Exclusive variant in grey - with gold fork legs and wheel rims.