A week ago KTM took the wraps off its 790 Adventure Concept, giving an early glimpse of the upcoming parallel twin adventure machine. But these spy shots give a much clearer impression of the production version that will be in showrooms in 2019.

What’s clear is that the ‘concept’ seen at the EICMA show in Milan was actually very close to the finished bike. Virtually every body panel is identical, as are the wheels, the tubular steel frame and the WP suspension.

The differences are focussed around the nose, where the concept had a Perspex panel doubling as both a screen and a light cover. On the production bike, there’s a taller, more practical windscreen and a separate headlight following KTM’s current design language with a vertical split down its centre.

Other than that, the production model prototype seen here gains a more sensible front mudguard instead of the motocross-style one used on the concept, and the concept’s vicious-looking, circular-saw-style brake discs are swapped for more conventional, smooth-edged ones.

Moving back, the bodywork panels are all near-identical, just switching from exotic carbon-fibre to a more practical plastic. The final production bike’s silencer is, of course, much larger than that of the concept version, but it actually looks rather neater than the slapped-on, aftermarket-looking Akrapovic of last week’s show bike. 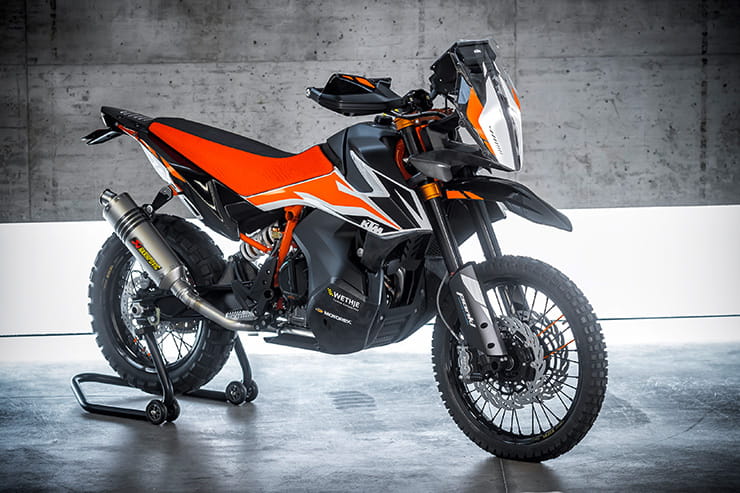 Detail differences include the addition of pillion pegs, of course, plus road-going addenda like indicators, mirrors and a law-abiding licence plate hanger.

We can also see that the bike uses the same instruments as the KTM 790 Duke that form’s basis of the 790 Adventure.

While we’ve got no official specs, we know the engine is the new 790 Duke’s LC8c parallel twin. In the Duke it’s making 103bhp (77kW, 105PS) from 799cc, putting it ahead of all its obvious rivals. Triumph’s newly-revamped Tiger 800 and BMW’s all-new F850GS both manage around 95hp, and even Honda’s much-lauded Africa Twin, with a 200cc capacity advantage over the KTM, achieves only 94hp.

KTM also has a strong record of making its bikes lighter than the competition. The 790 Duke, with the same engine and a fairly similar frame and swingarm as the Adventure, is 169kg dry. Ready to run, complete with fuel, it’s 189kg. Even if the Adventure version is 10 or 15kg heavier, it will still massively undercut the BMW F850GS (229kg wet), Tiger 800XCx (also 229kg wet) and Africa Twin (232kg wet, or 243kg for the ‘Adventure Sports’ version, and add an extra 10kg for DCT models).

Unfortunately, we’ve got almost exactly 12 months to wait before we see the 790 Adventure’s official reveal…