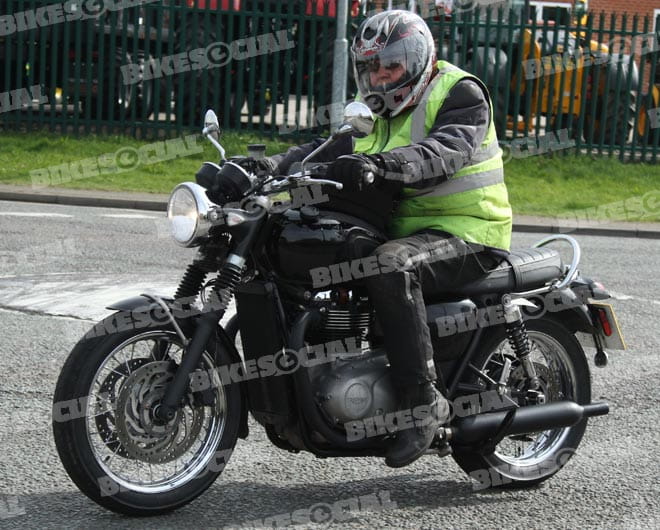 Here is the living proof of Triumph’s all-new Bonneville set to be officially unveiled later this year in time for release in early 2016. It looks set to be a big year for the Hinckley-based firm as last December we caught what looks to be a Speed Twin with an 1100cc engine in testing.

These photographs show a classic looking motorcycle styled on the original 60’s Bonneville but delving a little deeper and looking a little closer and one of the most iconic names in motorcycling history shows a plethora of new, improved and modern parts.

First and foremost, what we’re seeing here is a near production ready machine with a brand new, water-cooled 1100cc engine. It is therefore certain to be the new platform on which Triumph will base its future models primarily because the old air-cooled engine, which has existed since 2000, won’t meet future emission regulations. What is interesting is the fins on this engine which have been designed to replicate air-cooling.

But this is more than just a new engine in an existing model. These photographs show a completely new bike with a new frame, bodywork, twin disc brakes and ABS all round all worthy of note. Of course, ABS is mandatory on all new over-125cc motorcycles from 1st Jan 2016 onwards. 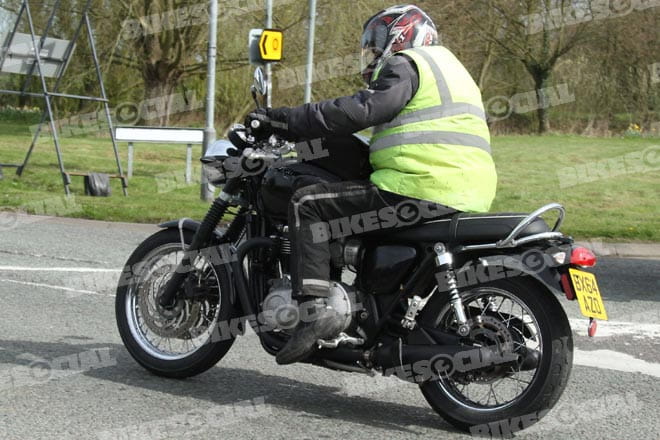 Akin with the original styling, Triumph have been clever at hiding the more modern parts such as the catalytic converter which is under the front of the engine but the exhausts are designed to look like they go straight from the cylinders to the silencers. Also, while it's impossible to hide the radiator there's no sign of water pipes or a water pump. An educated guess would suppose an electric water pump is being used and therefore the water will be channelled through the frame tubes to avoid the use of rubber pipes.

In a nod towards the increase in power and performance, the rear wheel is wider than the current model while the front wheel looks to be 18” rather than 19”.