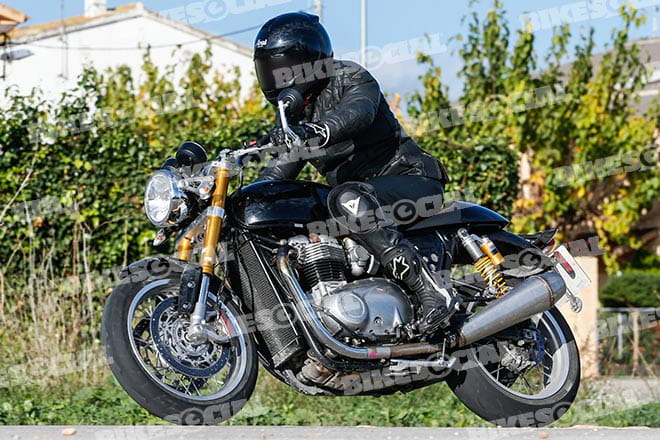 Two very similar versions of a brand new Triumph have been spied cruising around the Spanish hills together near the British firms’ test base just outside Barcelona and while at first glance you could be fooled into thinking they are simply revised Thruxtons, on closer inspection a brand new liquid-cooled engine is clear to see among other subtle differences.

The new 1,100cc twin could see Triumph revive the Speed Twin name and it is therefore certain to be the new platform on which the Hinckley-based manufacturer will base its future models primarily because the old air-cooled engine, which has existed since 2000, won’t meet future emission regulations. What is interesting is the fins on the engine which have been designed to replicate air-cooling.

While some are naming the new bike as a ‘Street Tracker’, it’s clear to see from the spy shots that the design of these two bikes have no correlation to a high-barred street tracker and are much more cafe racer-based in their looks. Bike Social understands Triumph will revive the Speed Twin name for this 2016 model range, which could well be seen in public next year. 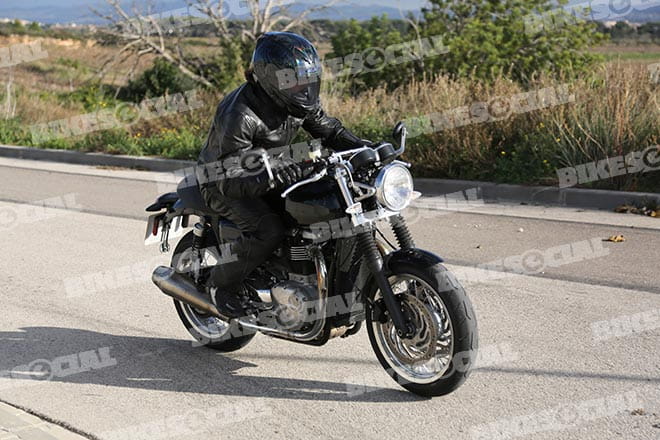 The two versions spotted both appear to be near-production ready with only the home-brewed silencers and taped up logos giving away the prototype status. The higher-spec model is equipped with the same four piston, radially mounted Brembo front callipers as the current Speed Triple R while the addition of ABS, an EU mandatory on new designs, is given away with the sensor ring. From the photographs we can also see Ohlins upside down front forks and adjustable Ohlins rear shocks. Pillion footpegs are apparent on both models as is the single seat unit on the higher-spec bike. A larger fuel tank and narrow radiator, twin disc brakes are the other giveaways.

Meanwhile, handlebar mounted wing mirrors, a single headlamp and identical wire-spoke wheels all match the current Thruxton and in a further attempt to fool us, both bikes have been UK-registered and classed as 2014 865cc Thruxtons! 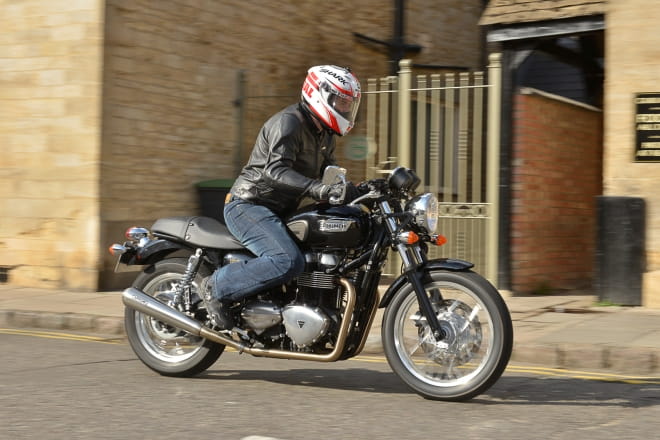 More details are certain to be confirmed soon but this is certain to be a significant step for Triumph’s future models and as a competitor to other higher-powered cafe racer-based bikes.

Triumph’s original Speed Twin was a 500cc vertical twin unveiled at the 1937 National Motorcycle Show and thanks to its lighter weight, narrower dimension, competitive price by comparison to the single’s of the day plus its ability to achieve 90-100mph on the road, it became quite an influential design.

After WWII ended, every British manufacturer offered a 500cc vertical twin. The basic design was evolved into bigger twins but it was the basis of all Triumph’s until the 1980’s.