It’s fair to say that retro roadsters, or modern, straightforward, upright bikes with the styling and spirit of classic bikes from the ‘60s and ‘70s, is, right now, one of the most exciting, dynamic and popular classes of machine of all.

BMW kick-started the whole trend with its first RnineT in 2014 – a bike based on the current R1200R roadster but with retro styling touches designed to commemorate the 90th anniversary of the German firm’s original boxer, the 1924 R32. The huge success of that bike – it was originally conceived as a limited edition but quickly went into mainstream production – spawned both a whole family of RnineT variants and a host of imitators from rival manufacturers.

But even BMW weren’t the first. Britain’s Triumph has been successfully producing, in a variety of forms again, its own reinvented Bonneville since 2000. Moto Guzzi’s Bonneville rival, the V7, has become the backbone of the Italian legend’s range since its introduction in 2008; while Ducati’s offering, its retro-inspired, novice-friendly Scrambler family, first introduced in 800cc form in 2015 has, like BM’s RnineT, blossomed into a whole family of machines. Even the conservative Japanese have now jumped on the retro band-wagon with bikes ranging from Honda’s glorious CB1100 to Yamaha’s funky and fun XSRs and Kawasaki’s latest, its delectable ‘70s throwback, the Z900RS.

But with all this ever-growing choice out there what should you go for an why? To help you choose, here’s our pick of 10 of the best – in ascending price order… 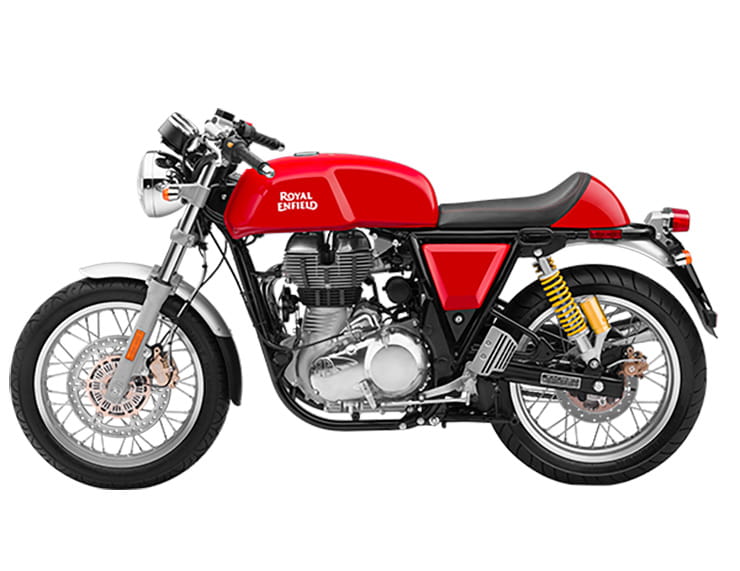 Although we’re still eagerly awaiting the all-new 650cc twins which should usher in a new era for Indian owned Royal Enfield, it’s fair to say the foundations for that were sown in 2013 with the Continental GT. Although based on familiar, slightly archaic running gear, the GT represented a significant step up. The authentic air-cooled engine was enlarged to 535cc, the chassis was revamped by Harris and the café racer styling was inspired by a ‘60s 250cc namesake. The result is stylish, classically ‘60s, charming and cheap. On the downside, it’s a little plasticky and its still meagre 29bhp and diminutive proportions means this is a short-hop Sunday blast bike only. 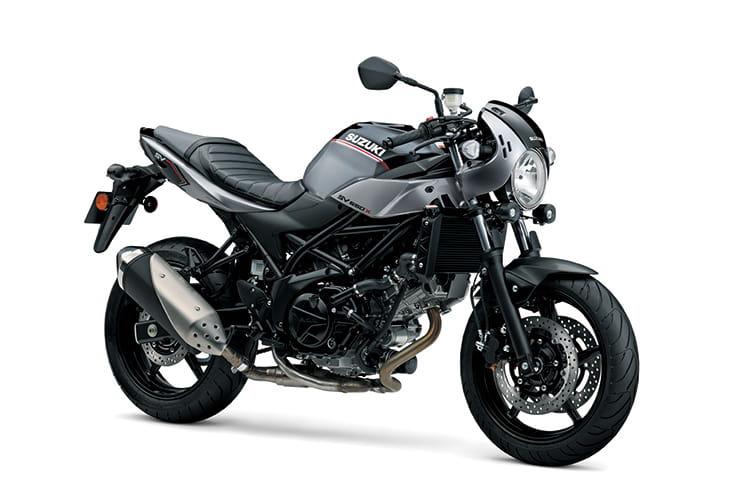 Although probably the least convincing and most disingenuous of all the retros here, the SV-X is still a decent bike at a tempting price. New for 2018 it’s basically a mildly restyled SV650, which itself was reintroduced in 2016 after a facelift and update and which dates all the way back to 1999, so don’t expect much in the way of cutting edge tech. That said, the SV is cute, clean, honest and a perky performer at a great price while the £500 more expensive X adds a ribbed seat, lower bars, nose cowling and different paint. True, that doesn’t add up to a credible retro but it does add a touch of retro style to an already decent bike and the slightly more café racer feel somehow makes it more engaging and fun to ride, too. The 75bhp V-twin is one of motorcycling’s greats, as well. 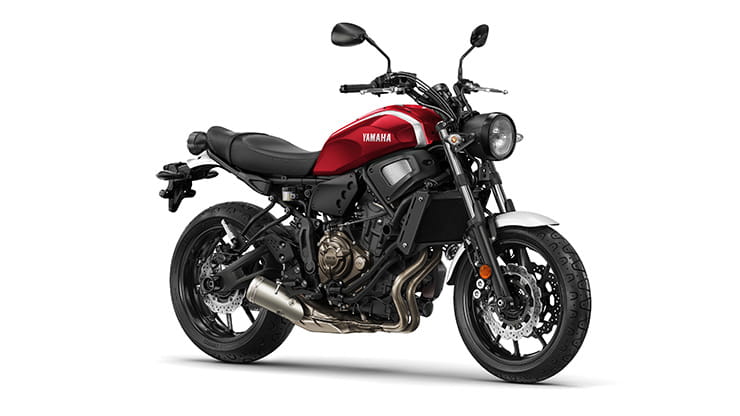 Yamaha’s two XSRs are the retro-restyled versions of its popular and perky MT-07/MT-09 modular roadsters. The 847cc, 115bhp, three-cylinder MT-09 came first in 2013 and proved an instant hit for its combination of fun and value, with the twin cylinder, 74bhp, 689cc MT-07 version coming a year later and becoming a Europe-wide best-seller ever since. But if they could be criticised for anything it was for their slightly basic spec and oddball looks. Enter the XSRs in 2016. Both got retro-inspired restyles (although they’re still quirky rather than conventional) with different lights, alloy tank, seat and even ‘retro’ Pirelli Phantom tyres, yet will all the same perky practicality as before. Suspension on the 700 isn’t the best but it’s still great value, lively, practical and, now, good looking as well. The 900, meanwhile, is £8899. 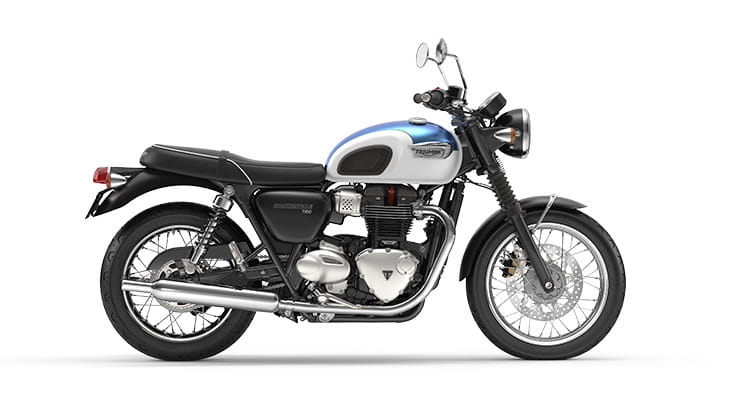 Revived British icon Triumph know more than most about producing successful retro roadsters having introduced its first modern Bonneville way back in 2000 (although the retro styled but modern engineered 900 Thunderbird goes back even further to 1995), so it’s no wonder the latest, all-new T100 (900cc) and T120 (1200cc) Bonnevilles are pretty much the definitive examples of the breed. In short, if you want a pleasing roadster with modern mechanicals and classic ‘50s/’60s British twin style, the Bonnevilles have it all: idiot-proof manners; pleasing performance; great styling and detailing (these are no ‘dressed up’ bikes like the SV/XSR/Z900, but have dedicated engines, chassis and more) and, best of all, the right tank badge. Although the £10,350+, 1200cc, 79bhp T120 is undoubtedly the better bike and ‘more’ in every way, we’d go for the 900 version which looks just as good, has enough performance for most for this kind of bike yet is almost £2K less… 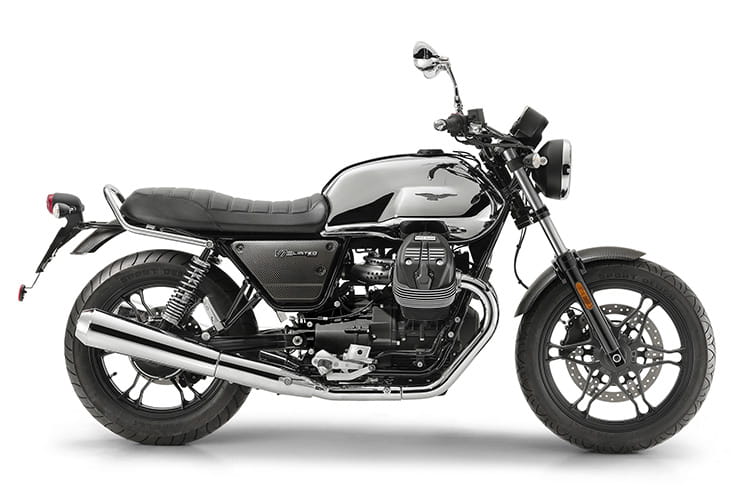 The V7 is to Italy what Triumph’s Bonnie is to Britain – yet with arguably even more authenticity. A similarly-style and proportioned roadster, the V7 was introduced in ‘Classic’ form in 2007 and gone on through various evolutions since to become the historic Italian marque’s bedrock and one of its biggest success stories. And, powered by an evolution of the old, ‘small-block’ Guzzi transverse V-twin shaftie from the old Nevada, it’s authentic rather than a ‘pastiche’, too.

This ‘Limited’ is the latest, limited edition, high spec version of the III version introduced to comply with Euro4 but the experience is much the same as ever: classy touches; manageable, unintimidating proportions; the evocative (if slightly underpowered, at 52bhp, compared to the more modern Bonneville) V-twin and sweet handling. This Limited has a chrome tank and swathes of carbon fibre, too. No, it’s not as good as the Brit, but there’s lots to like here… 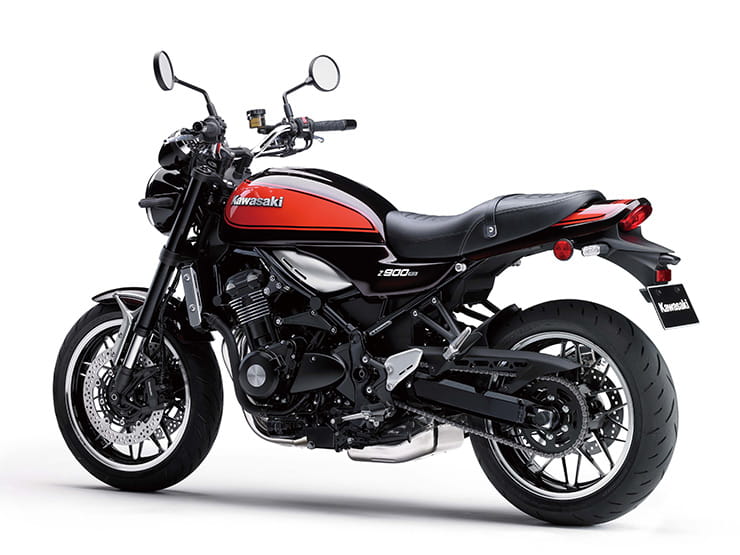 New this year and an impressive hit due to its combination of mouth-watering, Z1-inspired styling – right down to its twin clocks, clever alloy wheels (which remind of wires) and ‘70s brown/orange livery – on top of already potent, 110bhp Z900 running gear, the RS is one of the best Japanese retros yet. The Z900 chassis and liquid-cooled four means it’s a decent performer and there are enough sweet styling touches to satisfy. Annoyingly, the Z1-alike brown/orange colours cost £300 more while there’s also a café-racer styled ‘Café’ version, with lowered bars, fairing cowl, stepped seat and classic Kawa green livery for £10,349, too. 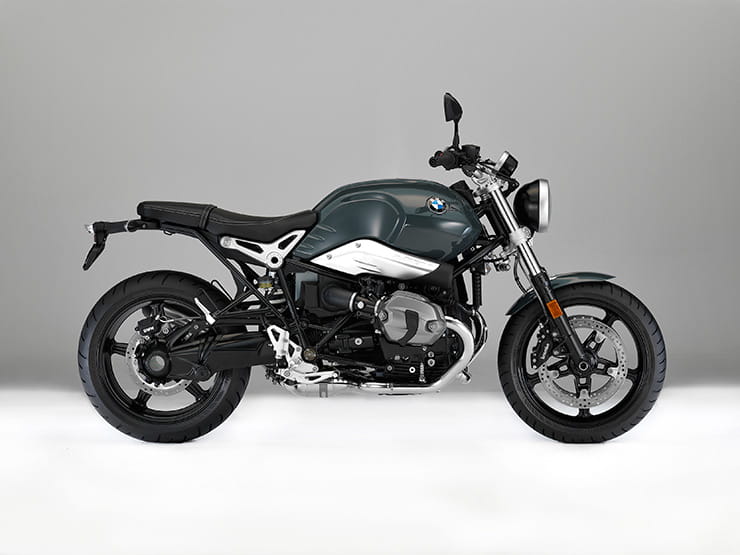 Triumph’s Bonneville aside, BM’s RnineT retro roadster, first introduced in 2014 as a short-run anniversary special, is arguably the bike that most fuelled the growth of the retro roadster category. Basically, a modern R1200R roadster (which uses the older, oil-cooled, 110bhp version of BM’s boxer 1200 powertrain) but with retro-inspired styling touches that pay homage to great BMW boxers of yore. That bike proved such a hit for its blend of modern manners, 120mph performance and classy, heritage style, that it spawned a whole family of spin-offs and rivals. The 2018 ‘Pure’ is the latest addition and, being a bare bones variant (thanks to cast not wire wheels, steel not ally tank plus more basic suspension) that’s over £2K cheaper than the original, it represents great value (for a BM) while still supplying most of the RnineT experience. 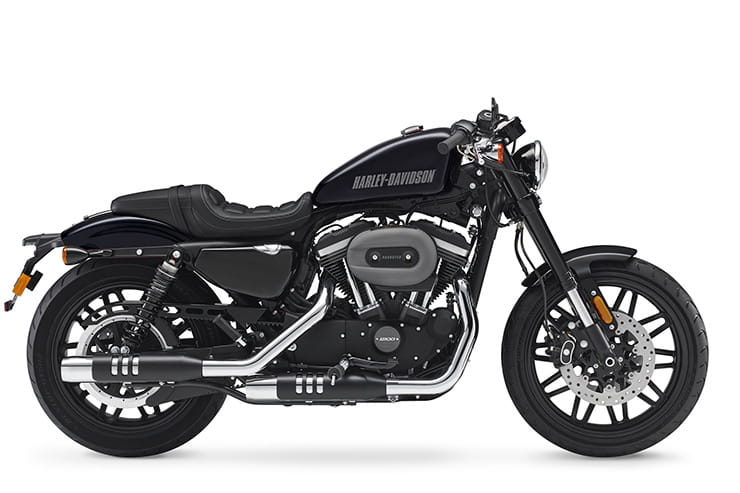 Slightly odd one this. US legend Harley is rightfully best known for its retro-styled V-twin cruisers and baggers but this variant of the 1200 Sportster is a surprisingly competent retro/cruiser/café racer hybrid. New inverted forks, new 19/18in wheels, twins discs and sporty ergos help make it an invigorating handler, the lumpy, pushrod V-twin is out of its comfort zone but just about competent and it’s got proper Harley old school styling, too. Think of it as Harley’s take on Triumph’s old Bonneville Thruxton and you’ll be there, even if the cruiser ‘peanut’ tank looks out of place. 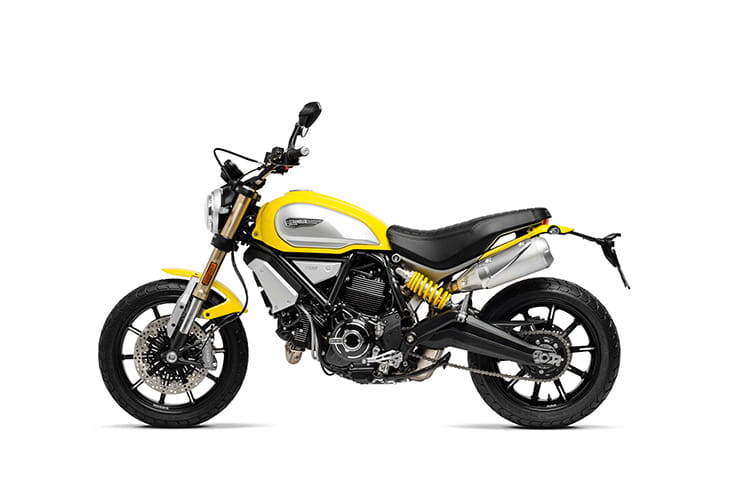 The Italian legend’s ‘Scrambler’ sub-brand of retro-styled, novice-friendly V-twins have proved a huge success ever since the first four 800cc models were introduced in 2015. An A2 licence compliant 400cc version came in 2016, while some other stylized versions followed, although all were considered slightly tame. But this 1100cc threesome, new for 2018, brings slightly larger proportions, decently meaty 86bhp performance and more – yet all with the pleasing retro Scrambler style. The Special, at £11,495, delivers even more retro style with wire wheels, alloy guards and more, while the Sport £12,295) has posh Ohlins suspension. Not fast, gorgeous or particularly authentic, admittedly, but they’ve definitely got something… 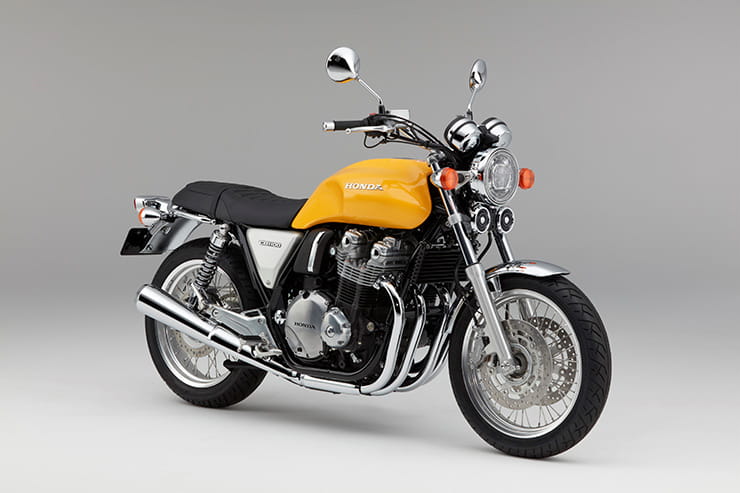 Unique among the retro roadster breed, the big CB1100 is also typically Honda in being a clean-sheet, technological tour de force – in this case an air-cooled transverse four, something Honda hadn’t built for 30 years and one that, in also being Euro4 compliant, is a huge achievement. It took even Honda a while to get it right, though. First seen as a concept bike in 2009, then an Australasia/Japan special it finally came to UK in 2013. Although its engine in particular was admired, that version was also considered a little bland with niggly details such as a too-small tank. Other revisions followed and finally, for 2017, with new tank, revised intake/exhaust (for a more characterful delivery) plus a new, sportier and’80s-styled RS sister model, it’s now classy, authentic and uber-cool. Still a little soft and no powerhouse, admittedly, the CB is also cultured and satisfying.