Does dropping a motorcycle helmet ruin it? 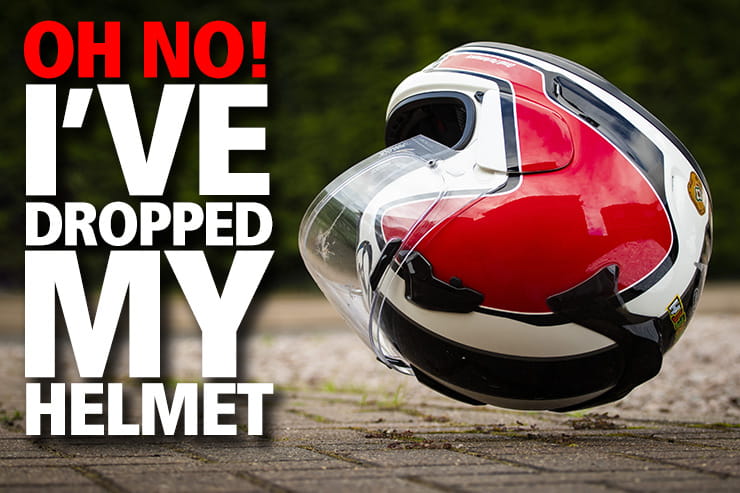 We’ve all done it; left our lid on the seat of the bike then knocked it to the ground. Or it’s rolled off the table. Or it’s just slipped out of our hands.

On the record, many helmet manufacturers will suggest that, for you to be safe and to protect themselves from potential litigation, the helmet should be replaced.

Off the record though, with no weight inside to add more energy to the impact, they’ll often say that a helmet might – perhaps – be okay.

The problem is that there are so many variables; how high was the drop, what did it fall onto, how old is the helmet, was there anything inside?

When should you replace a motorcycle helmet?

If you’ve been down the road and struck your helmet, there’s a good chance it needs replacing. If it’s got scrapes or dents then almost certainly, but you can be thankful that it’s done its job. Once that structure is compromised it can’t perform as well again if you have another off. If you have kit cover as part of your motorcycle insurance, now’s the time to take advantage of it.

If you simply dropped it onto the floor you might get away with it, and while a store can have a look for you, maybe removing the lining in the process, they can’t see between the inner and outer shell, and they can’t see any damage that could have been caused to the polycarbonate or fibre shell under the paint.

Manufactures will also say that helmets need to be replaced after five to seven years due to the expanded polystyrene liner (EPS) – as well as the outer shell – potentially starting to degrade. 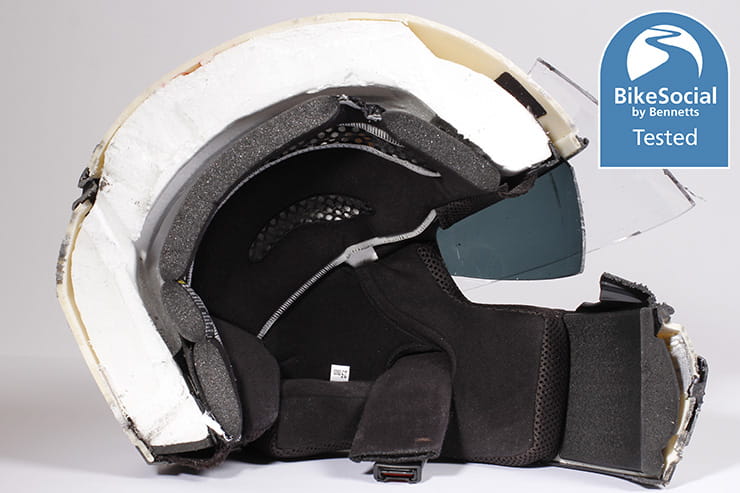 It’s under the paint that damage could happen, but you’ll not be able to see it. Unless you cut it in half, then it’s time for a new lid anyway!

How can I know if my helmet is safe to use?

The only way to know for sure if a helmet is safe to continue to use is to have it professionally inspected using the same technology that inspects the hulls of lifeboats, and is also used in the aeronautical industry, though this does only currently work for composite shell helmets – it’s not suitable for the thermoplastic or polycarbonate shells typically used on cheaper lids.

The Helmet Inspection Company has just started offering this service at a cost of £39.99 including return postage. You’ll have to pay to send the lid yourself (a £14.75 Parcel Force collection service is offered), though there are drop-off centres opening up around the country, which should make life easier.

Dropping a helmet doesn’t have to mean it’s ruined!

Because there’s no weight inside a lid when it’s dropped, it can sometimes be fine.

We spoke to Martin Slowey of The Helmet Inspection Company, who told us that there can be real surprises when it comes to testing. On the one hand they’ve had lids in that the owner swears hasn’t been in an impact, but damage has been evident – this could have happened without the owner’s knowledge, or might be due to poor handling, perhaps through leaving it on the tank and exposing it to fuel vapour. While there’s still more data to be collected, some helmets are revealing defects that the owners simply weren’t aware of.

Equally though, there have been helmets up to eight years old that have been checked as the owner didn’t want to part with them after the recommend five years, and they’ve had no problem receiving a pass certificate.

One customer had tripped on a ferry – when they fell, the helmet took the impact. Look at how bad it looks; what would you do if this was yours? 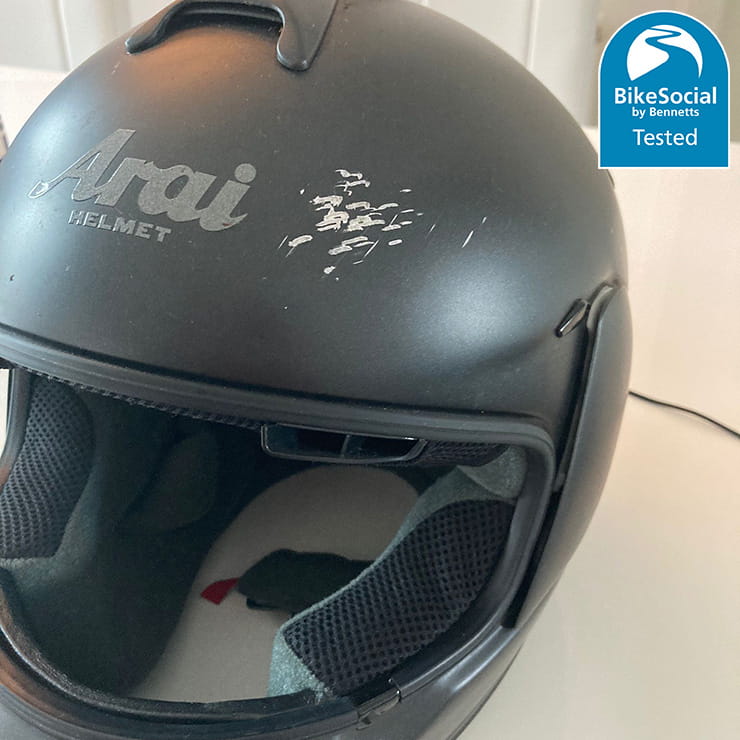 Incredibly, the inspection revealed that it had no defects or damage, besides the cosmetic scrapes.

The customer whose Arai this is hurt themselves when they fell, and aren’t sure whether the lid took a glancing blow or a direct impact, but the image shows the importance of a proper inspection.

We’re planning to have The Helmet Inspection Company assess several lids for us in order to learn more about the safety and longevity of helmets (and what happens when you drop them from various heights, expose them to fuel vapour and more) so watch this space, but we asked BikeSocial member Diggory Rush – who was worried about a helmet he’d been wearing during an accident – to review the service for us… 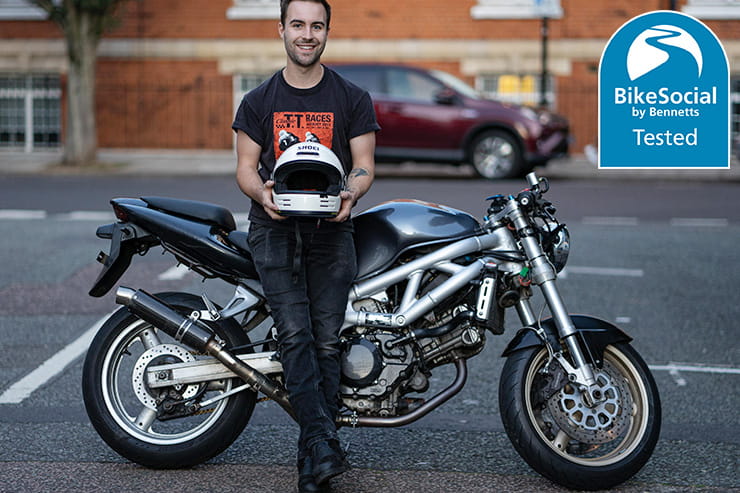 “I tucked the front of my SV650 in a daft crash that saw me manage to somersault and land on my feet,” Diggory tells us. “My mate, who was behind me, didn’t see me hit my head but there was a bit of grass on the visor that made me wonder.

“I was able to ride home, but despite there being no obvious damage to my Shoei Glamster – and having taken the lining out for a look, where everything seemed fine – the fairly high speed of the accident had me nervous.

“I was still wearing it, but only on my normal commute and was in two minds whether to contact Shoei and find out if it could be inspected, or to just buy another; I simply wasn’t 100% sure of its safety.” 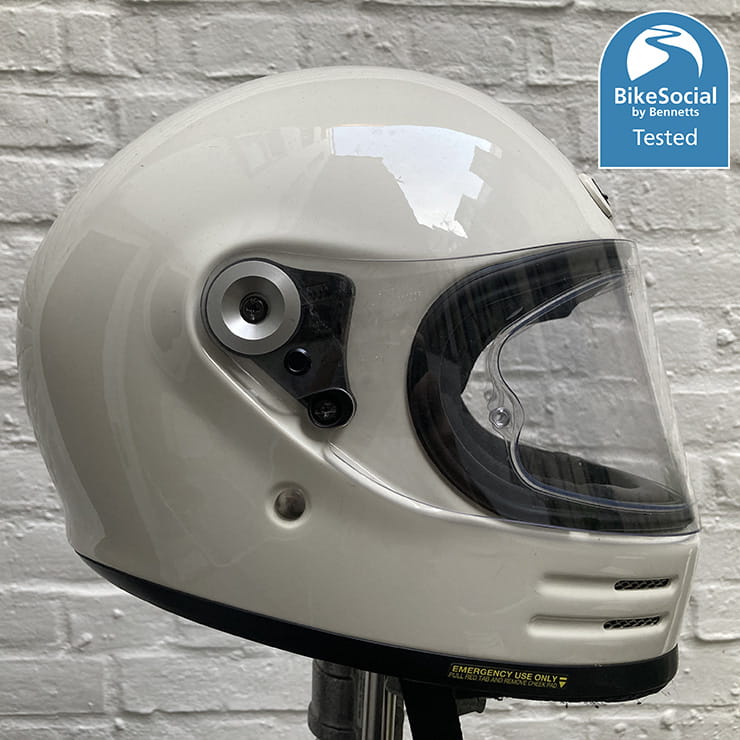 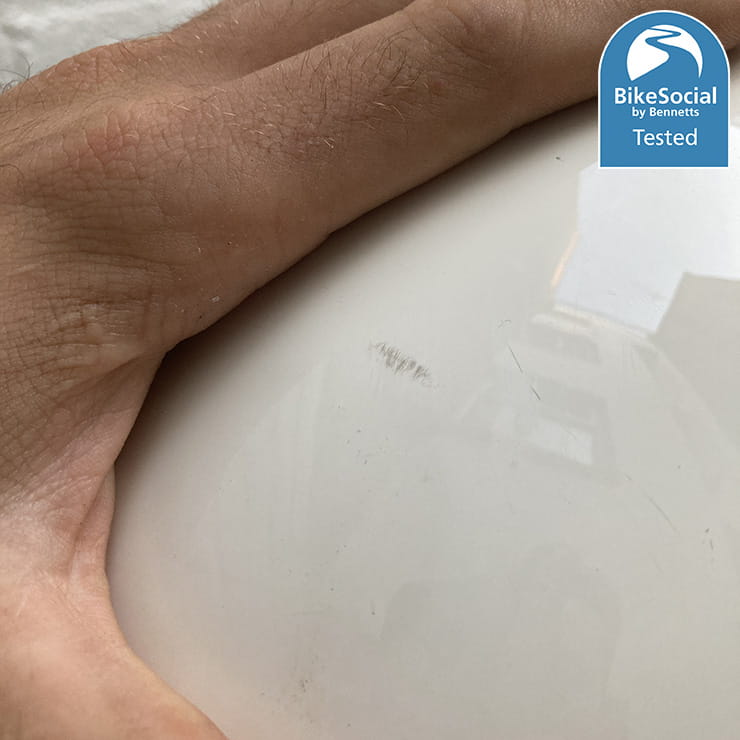 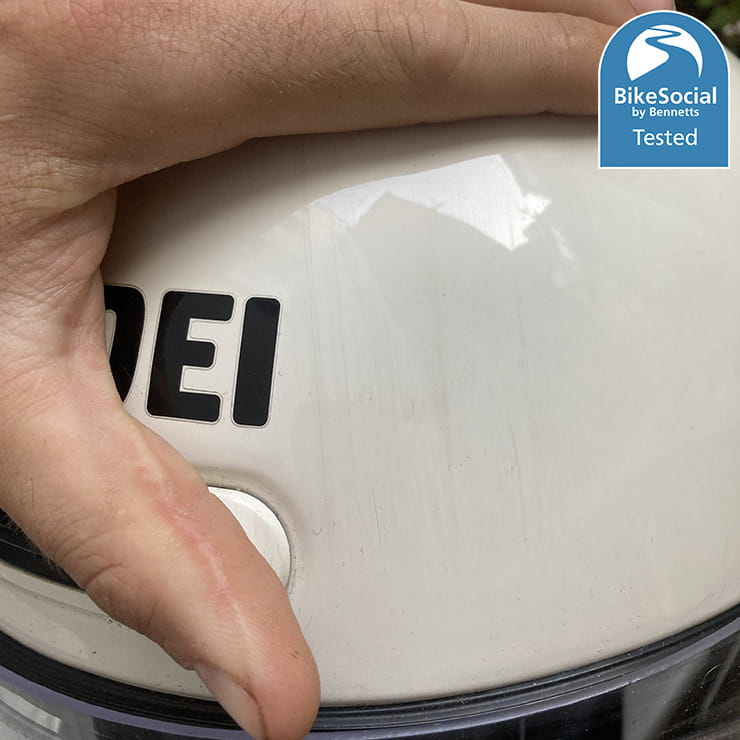 “I hadn’t heard of The Helmet Inspection Company, but after talking to John at BikeSocial I started the process and the first stage was to fill in an online form, which was simple and only took five or six minutes. The hardest thing was deciding how to pack the helmet – I ended up getting a spare box from a local motorcycle store and filling it with as much bubble wrap as I could [the service is in its infancy, but promises to offer suitable boxes for customers who need them in the future. Plus the drop-off centres will also simplify this].

“Within just three days it had been inspected and was on its way back to me… it had been found that the shell had received a large impact and was completely delaminated internally on the rear right-hand side. They’d put a small red sticker showing the impact location and this time, knowing where to look, I could definitely see it! 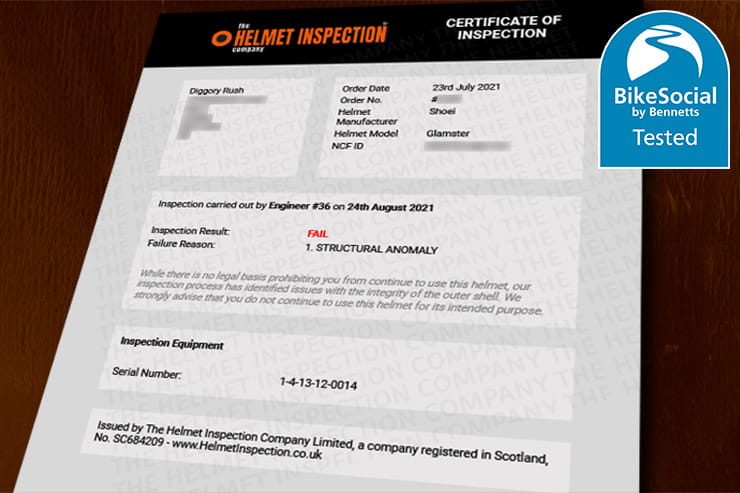 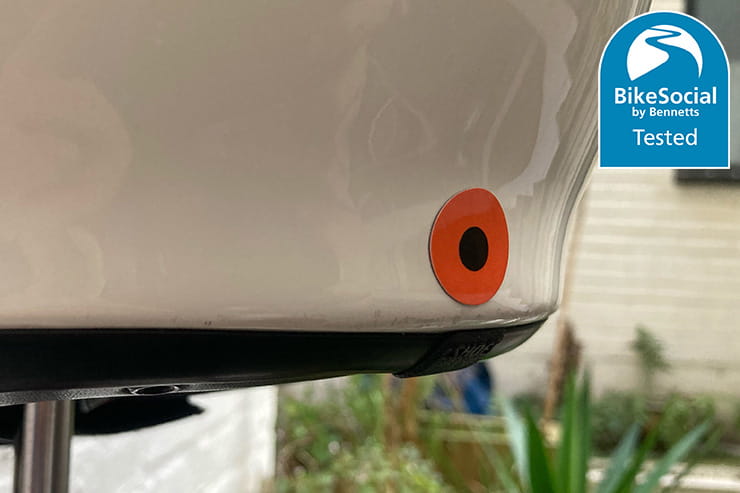 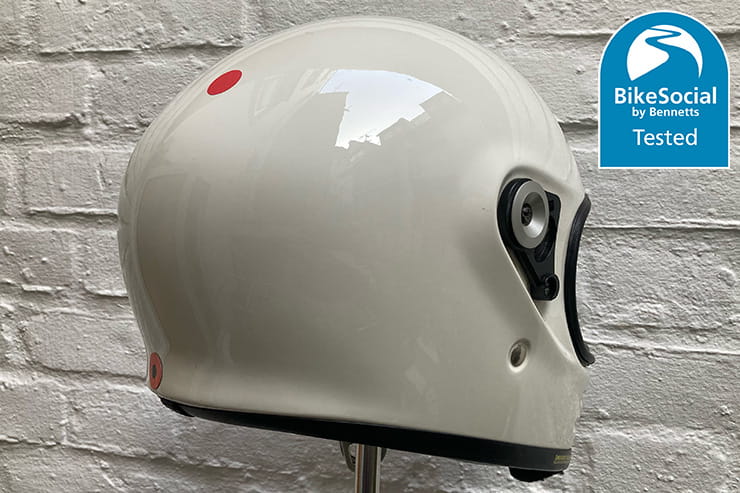 The certificate is downloaded from your account on the website, while tested helmets have an NFC sticker on them (the red circle with a black dot). The round red sticker seen here was also added to show where the damage occurred

“The helmet didn’t come back with any printed documentation, but I did have access to a certificate that I was able to download, and a near-field communication-enabled sticker on it that can be scanned with a phone to reveal a unique serial number [the idea is that, in future, scrutineers – for instance – could check the validity of any lid that had been inspected].

“I didn’t receive the scan of my lid, and would have loved to have seen it. When sending a helmet in you create an account and there is a section there for the technical staff to upload images, so hopefully that will come soon.” 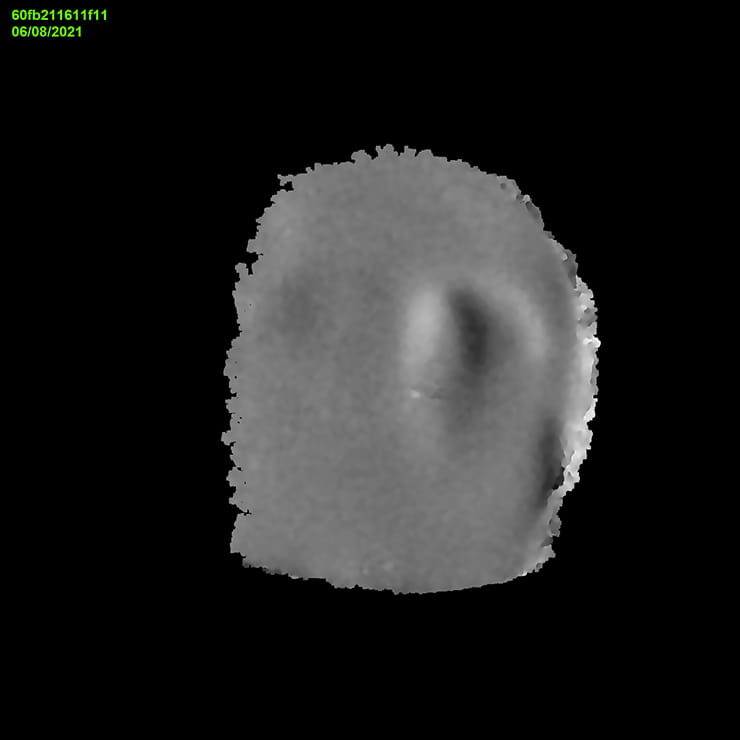 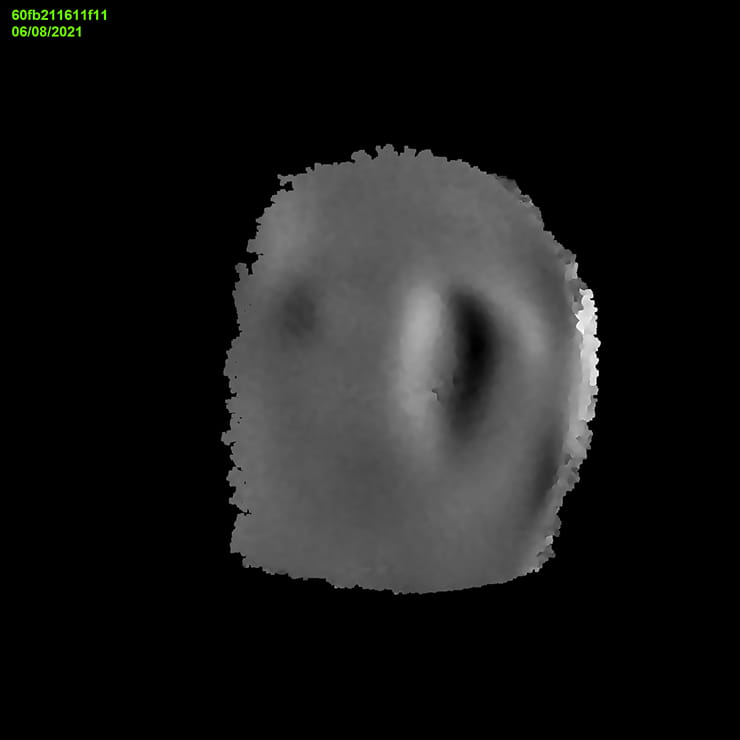 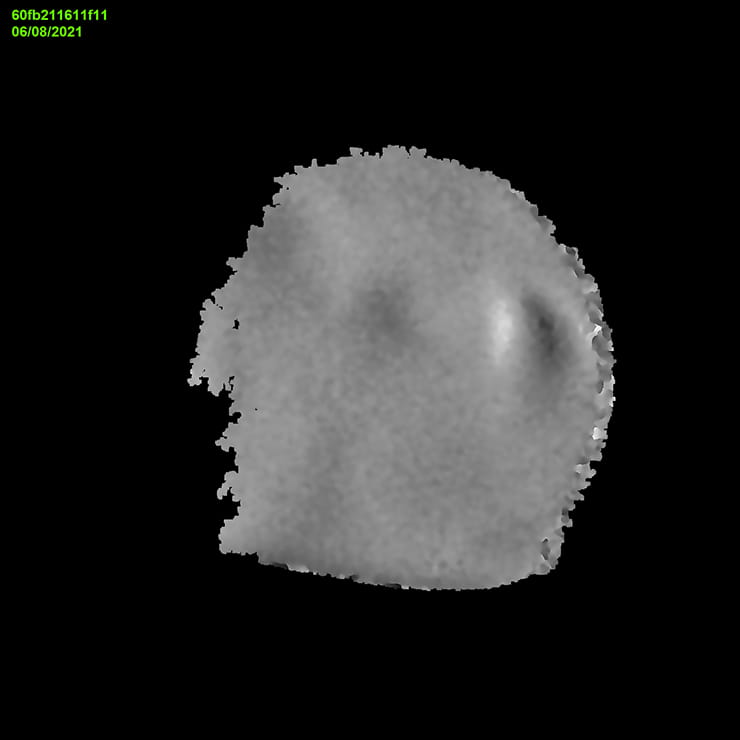 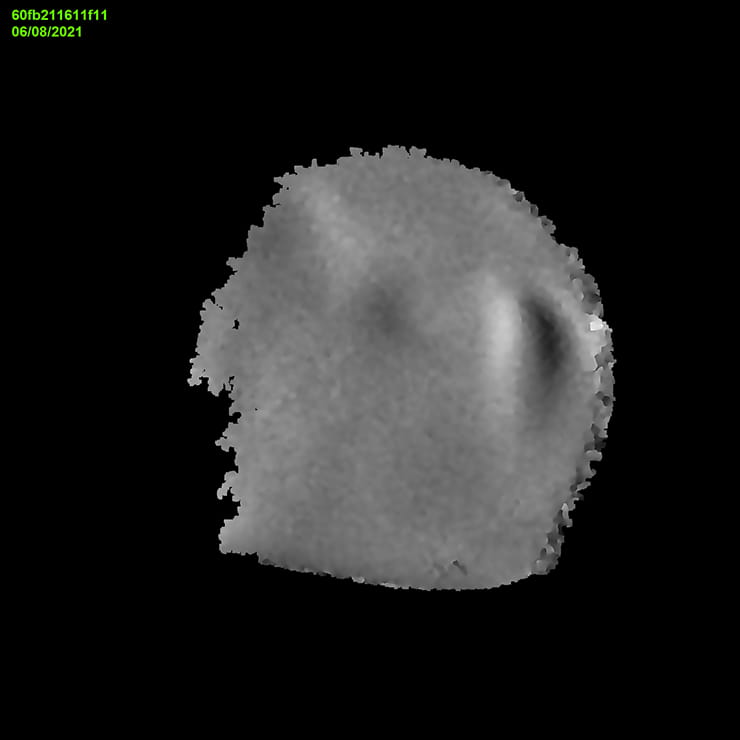 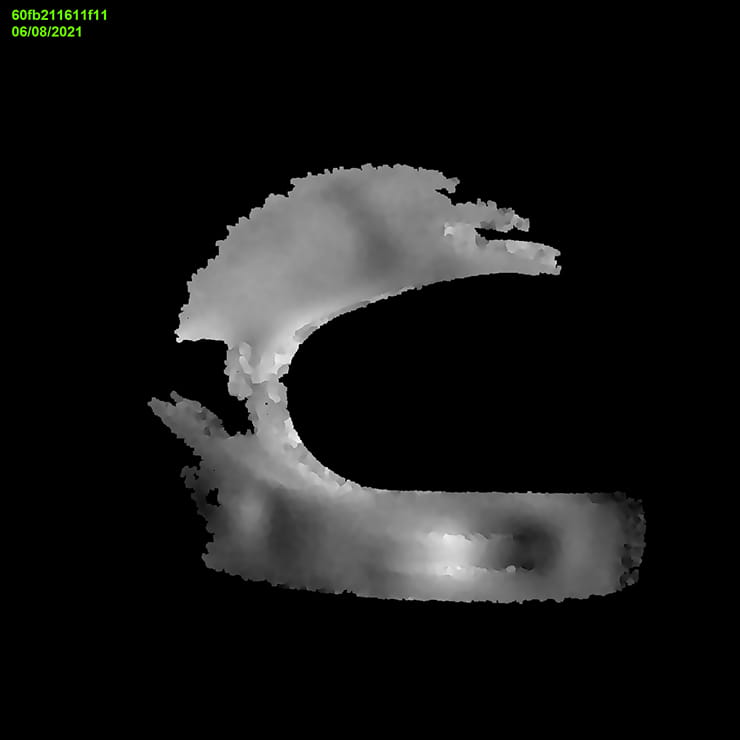 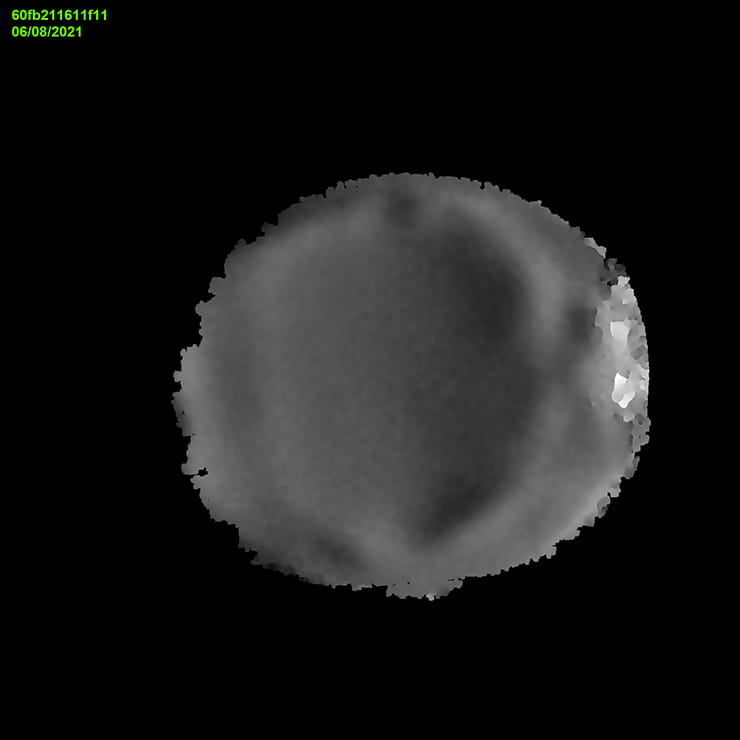 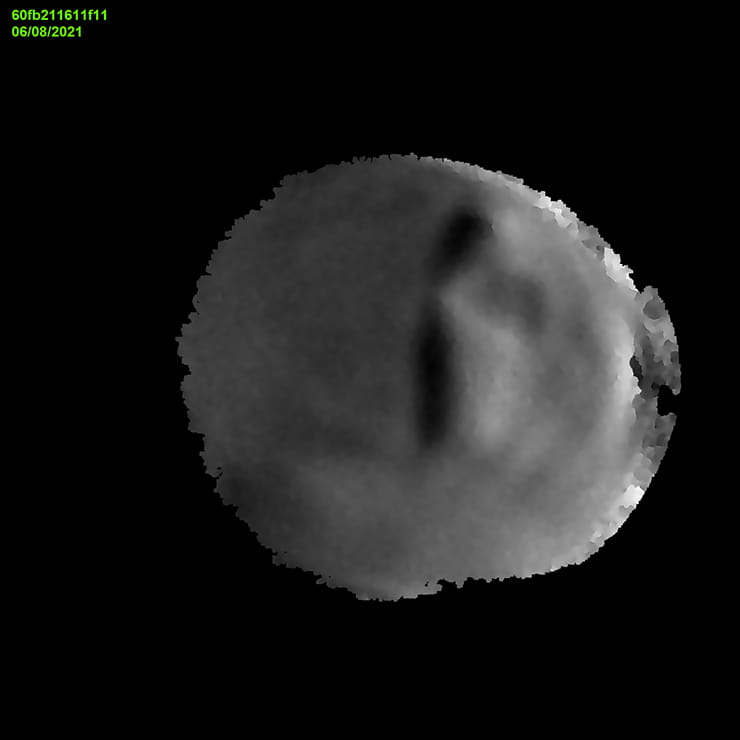 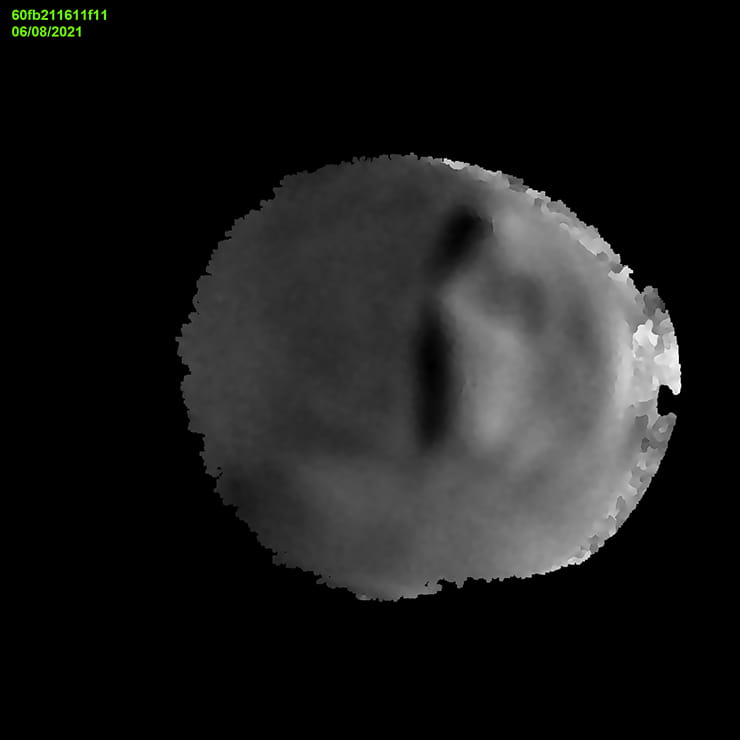 We asked The Helmet Inspection Company for a copy of the scans of Diggory’s helmet – without the specialist knowledge interpreting them is tricky, but you can clearly see some areas of concern

“With my engineering background I’d have liked some more detail about the damage my helmet had suffered, and to have seen the data, but I’d still thoroughly recommend the service. A visual inspection doesn’t give you any real idea of the impact your lid may have taken. More than that, my riding after the incident was definitely impacted by the anxiety around my helmet’s safety.

“It’s not often you’re relieved when you get bad news, but I was glad to know for sure, and I spoke to my fiancé Kiara about it, who told me she’d been worried that I was still using the lid.

“Receiving a £20 Sportsbike Shop voucher as part of the inspection did help soften the blow, and I intend to use the service again for my other helmet (an Arai), which a drunk friend knocked off the shelf.”

BikeSocial members save 20% off with The Helmet Inspection company – click here for more details. 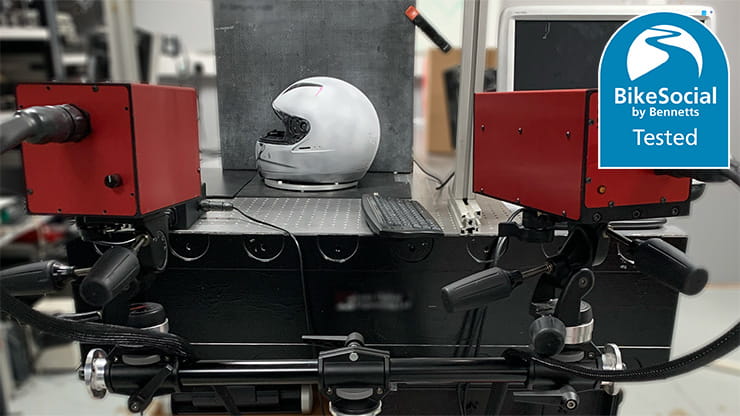 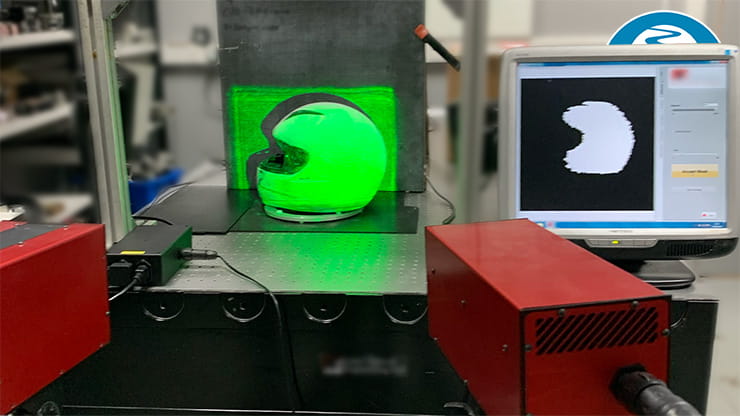 Scanning of the helmets is carried out in the Midlands. BikeSocial will be visiting soon to find out more about what can damage a helmet, and what you’re likely to get away with…

How to keep your motorcycle helmet safe

Looking after your lid is important, so don’t leave it teetering precariously on your bike… 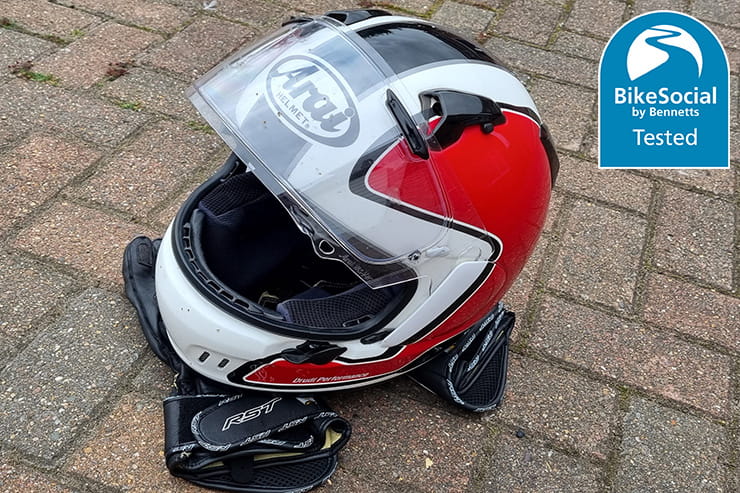 So where should you put your helmet?! The best bet is to lay your gloves on the ground then pop the lid on top of them. If it’s stable, I put the lid upside down, so bugs can’t crawl inside… my brother-in-law got bitten by a spider that had crawled into his helmet!