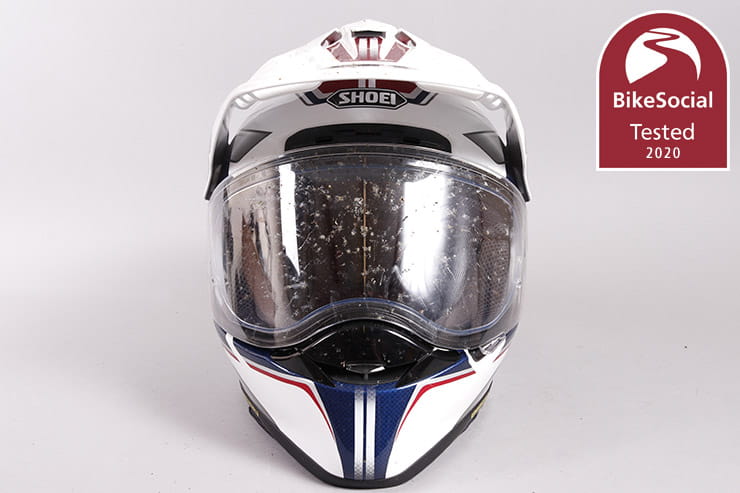 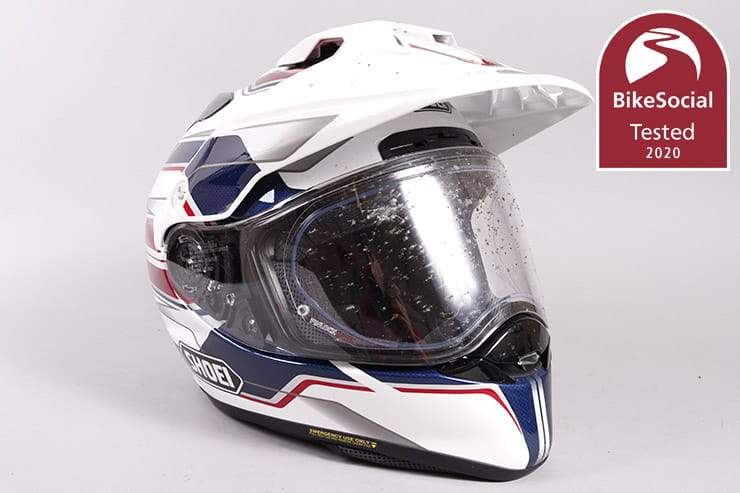 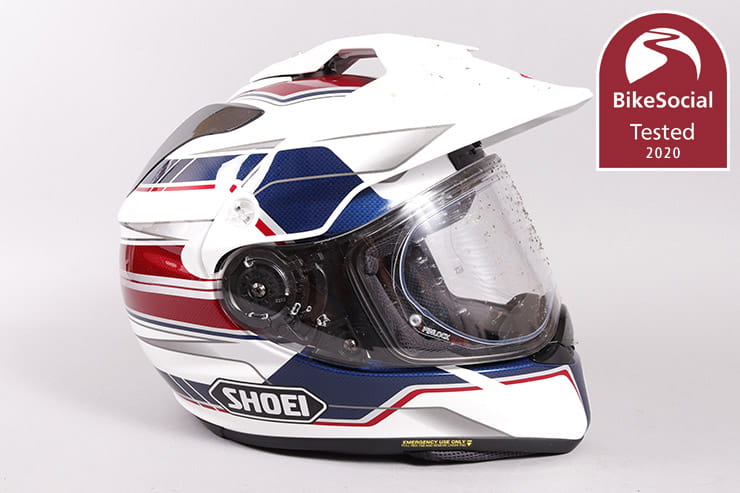 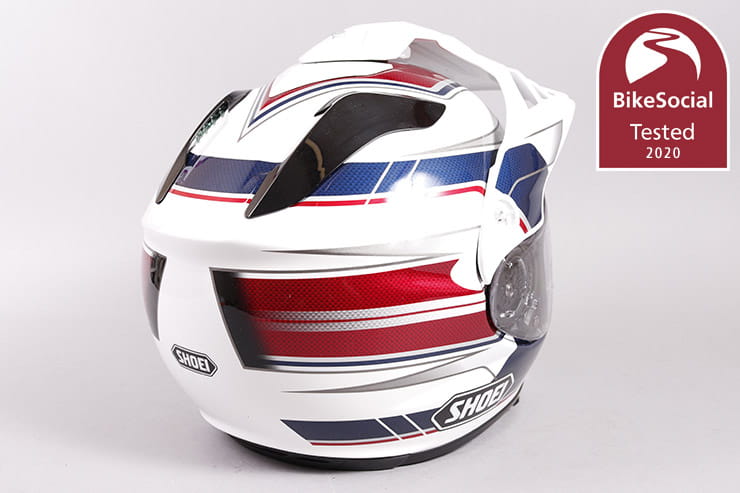 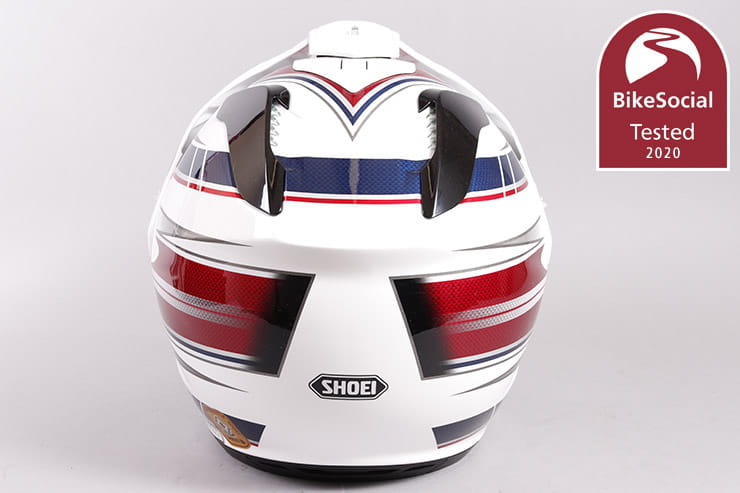 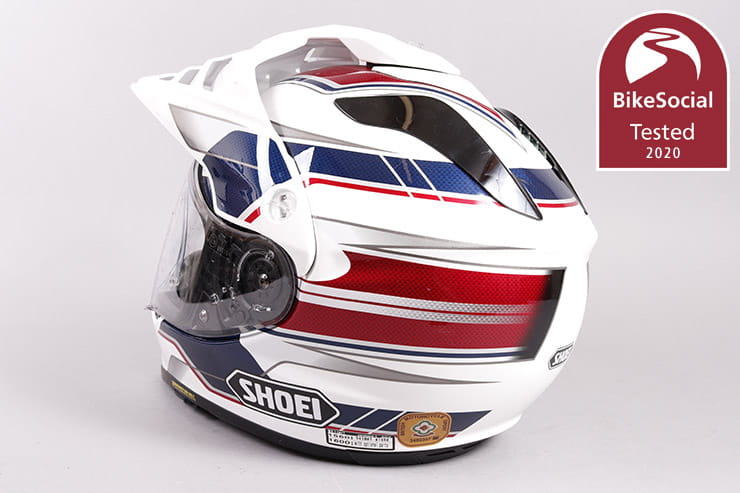 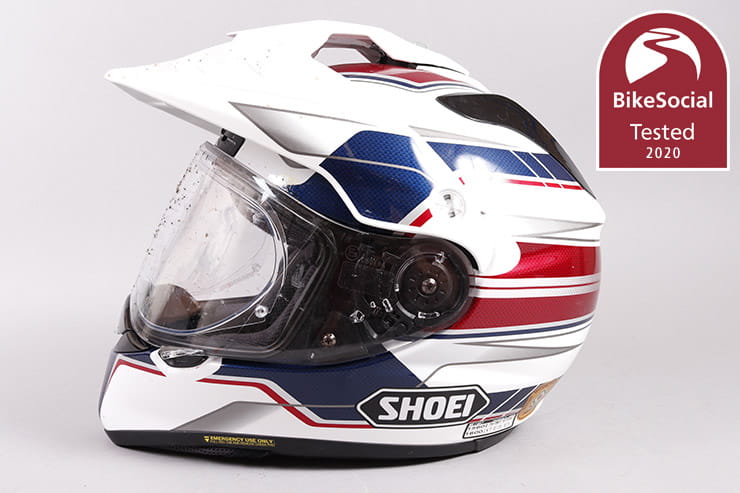 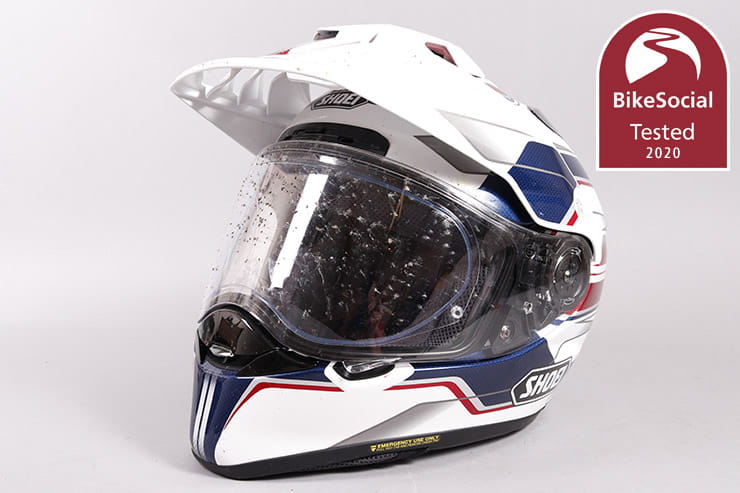 The Shoei Hornet ADV on review here is an adventure-focussed motorcycle helmet with all the convenience of a full-face lid, but the addition of a more prominent chin section (which helps improve airflow around the mouth), and a peak, which is great for riding in low sun.

The outer shell is made of an extremely strong composite fibre and resin, with four different moulds based on sizes XS and S, M, L and XL and XXL – this is common in many premium brands as it stops the helmet looking huge on someone with a smaller head.

The finish is excellent, with very well-applied graphics under a deep gloss on this ‘Navigate TC-2’ version, which joins three other graphics that add £90 to the cost of the gloss black or white models. A matt black version is also available for £459.99.

Weighing 1,601g, the Shoei Hornet ADV is 109g lighter than its most obvious rival, the Arai Tour-X 4, though it’s still 100g heavier than a typical standard full-face lid. Having said that, I’ve yet to ride in any helmet that feels too heavy in use – people are too quick to judge a lid by picking it up and comparing it to another in the hand.

I’ve never suffered a strained neck through a heavier helmet, but the peak on any lid of this style will cause fatigue over time. This one doesn’t push hard on your head when riding into the wind, though like the Arai and others it will be very noticeable when you turn your head or when riding in cross-winds. After a long ride at roads speeds, you’re likely to feel more tired.

Why do some helmets have peaks?

Off-road helmets typically have peaks, in part to shield you from mud and stones thrown up by the bike in front on a motocross track, but also – and this is where they’re particularly valuable on the road – to shield your eyes from the sun.

As many riders know, low sun – particularly when commuting in the autumn – can be dangerously dazzling in the evening, but by just tipping your head down slightly it’s possible to quickly and safely shield your eyes from the glare. 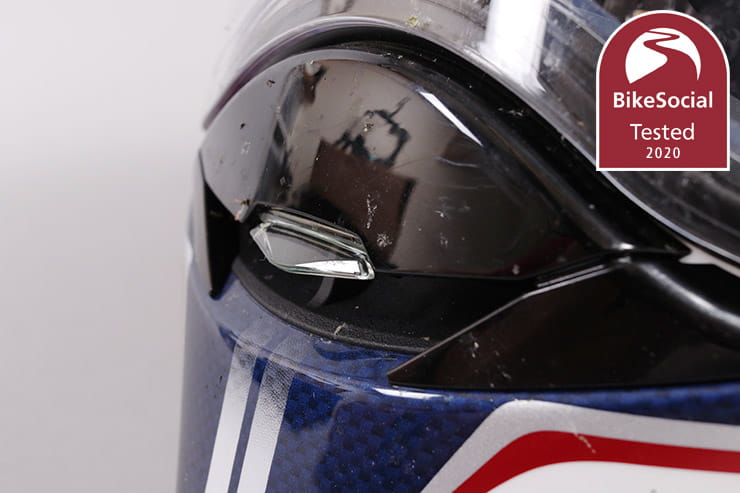 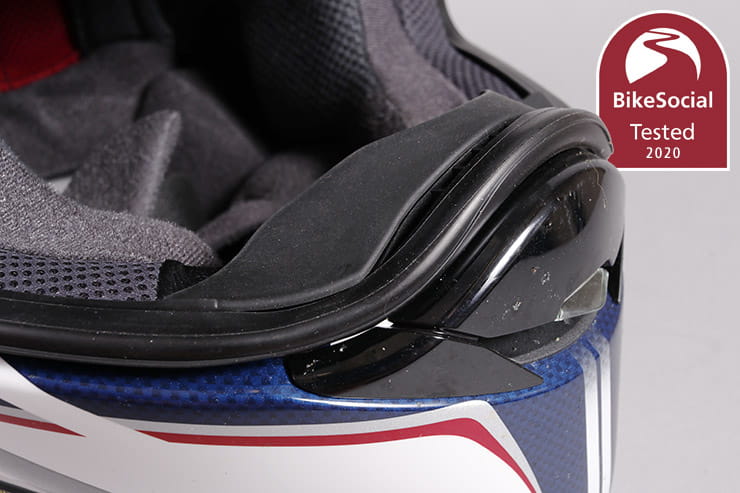 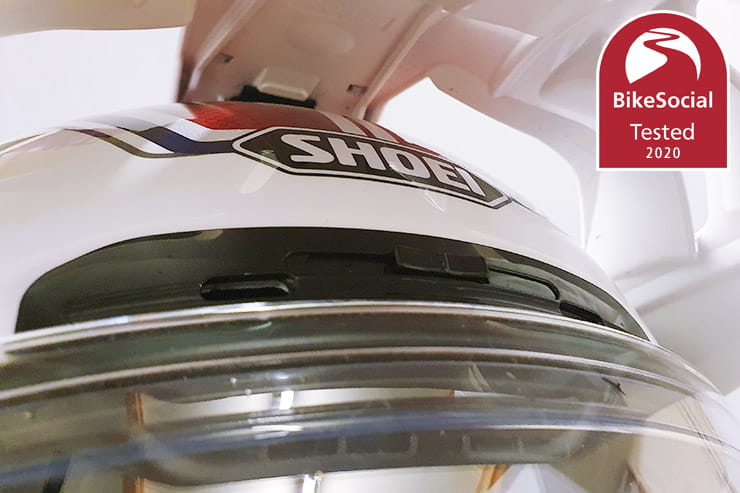 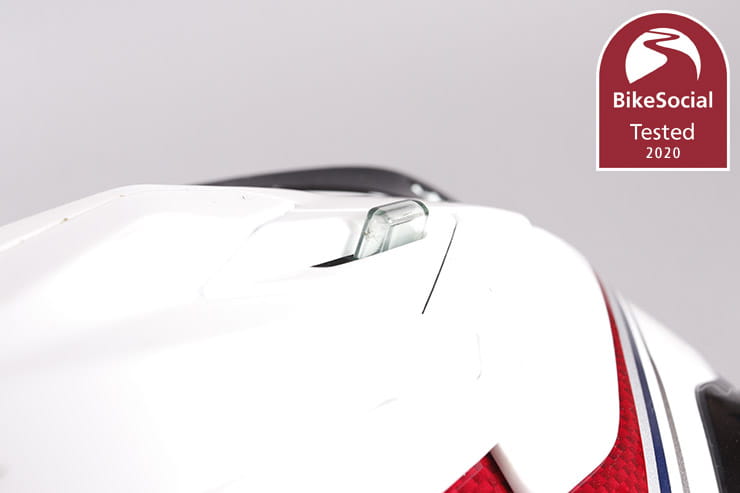 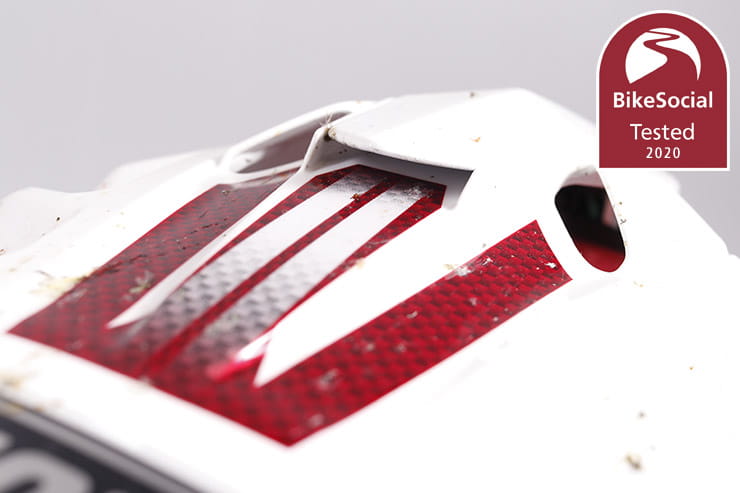 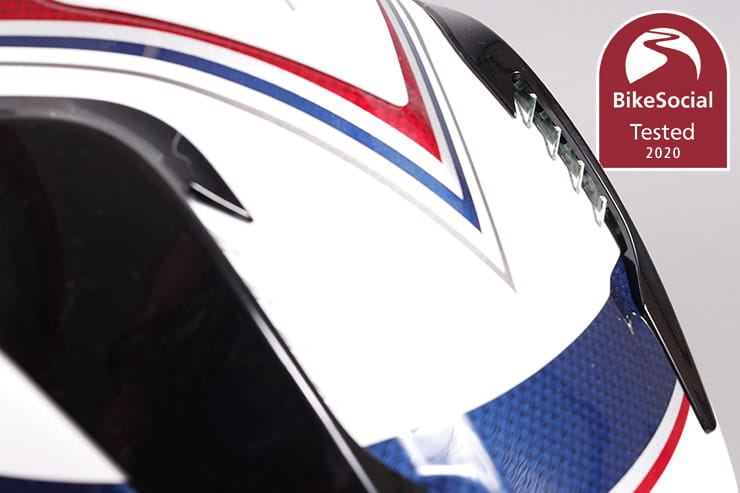 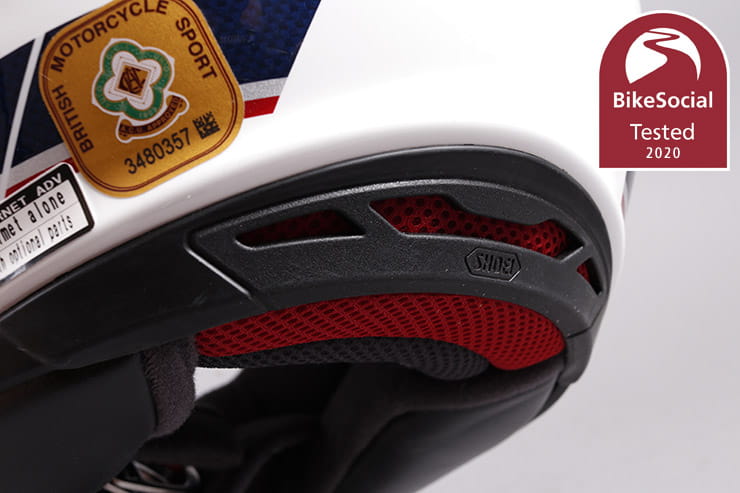 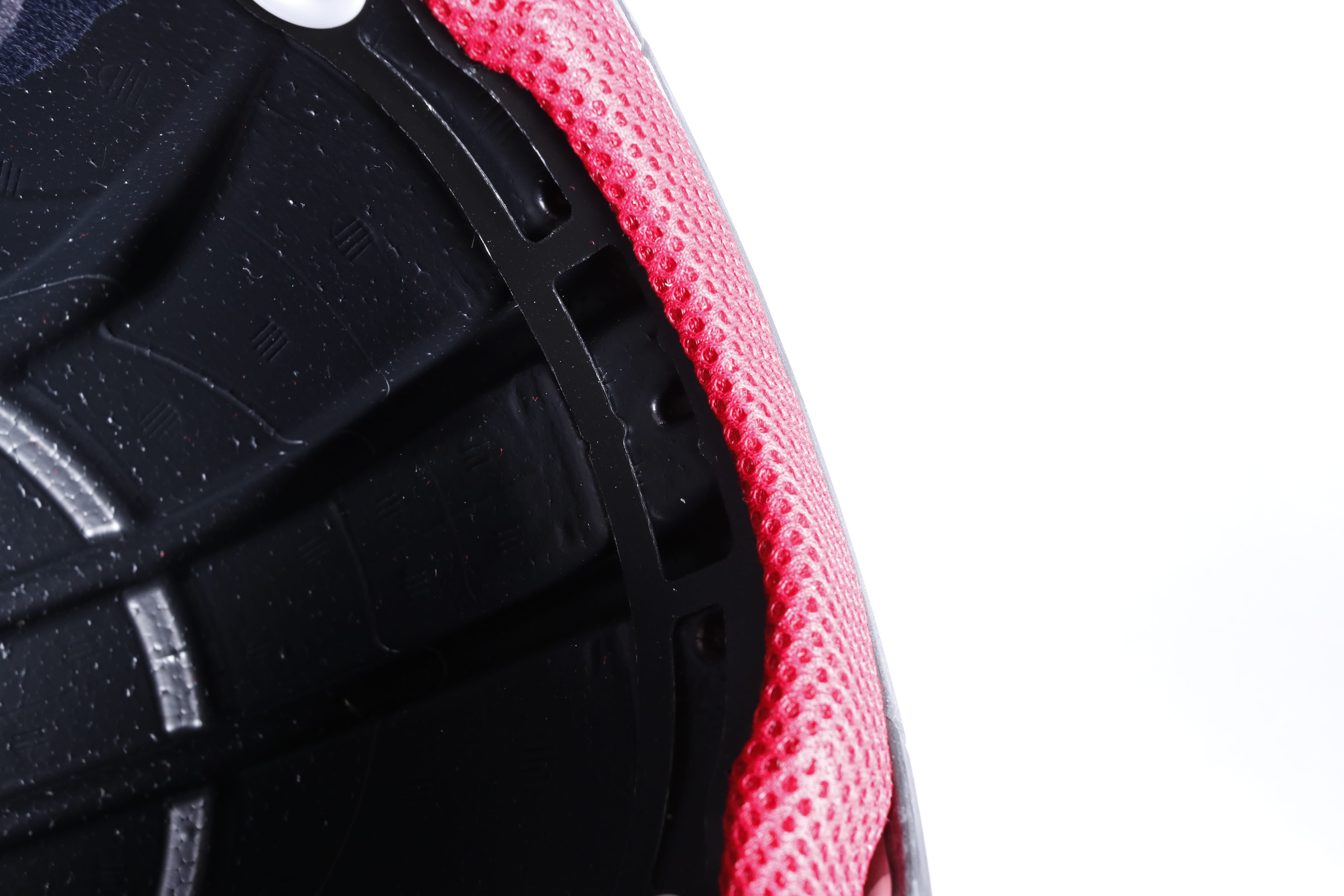 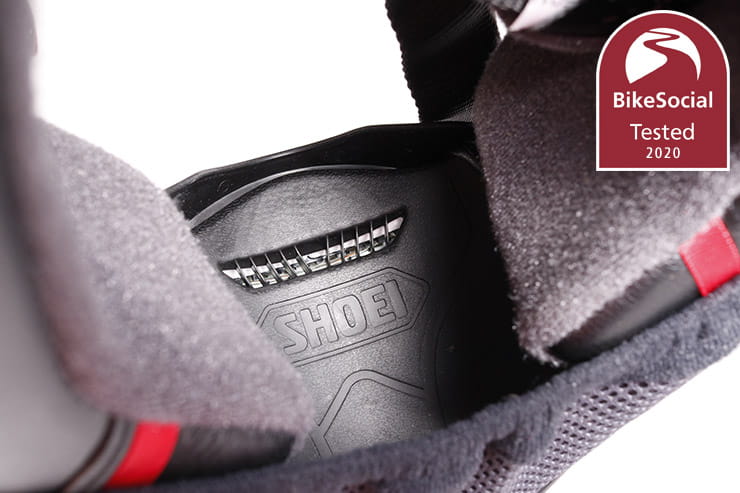 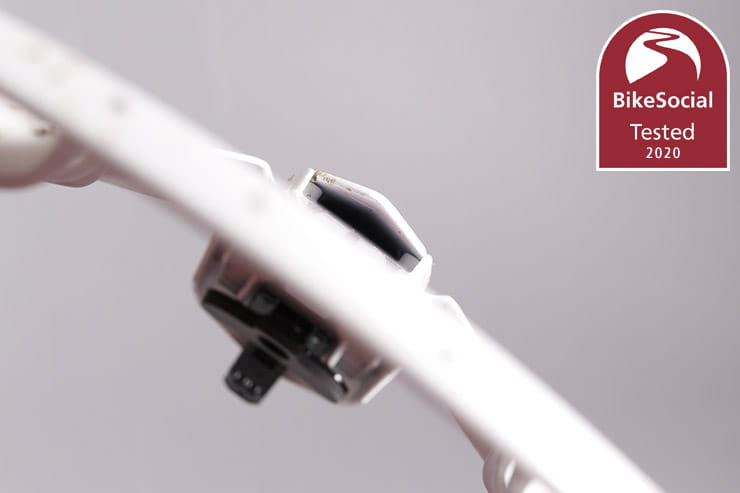 Full-spec off-road lids tend to focus on ventilation, and while this is more of a road-biased helmet, the Hornet ADV isn’t that powerful.

The chin vent can be opened or closed, feeding up across the visor to the brow and directly into the mouth. Unfortunately for winter riders looking for more ventilation to spectacles, the mouth feed inside can’t be separately closed, so you’ll need to just close that and crack the visor in order to avoid a blast of cold air to the teeth.

A slider on the brow opens two small holes to blow straight through, and there’s another vent on the top of the lid, which directs air to two ports inside – this can be opened or closed with a slider on the peak, and is fed air from a channel running along the top.

Two always-open exhausts on the rear are fed by two ports each in the inner lining, which combine with two channels feeding out of the bottom of the helmet through a fabric mesh.

The ventilation can be felt when the vents are opened – particularly the one at the mouth – but overall it’s not as powerful as you might hope for if adventuring in hotter climates. If used off-road, this could get particularly hot as you work your body harder.

A chin skirt is provided – fit it for a more still environment when riding in cooler weather, but take it out and you’ll benefit from much more air moving around the chin and mouth area. 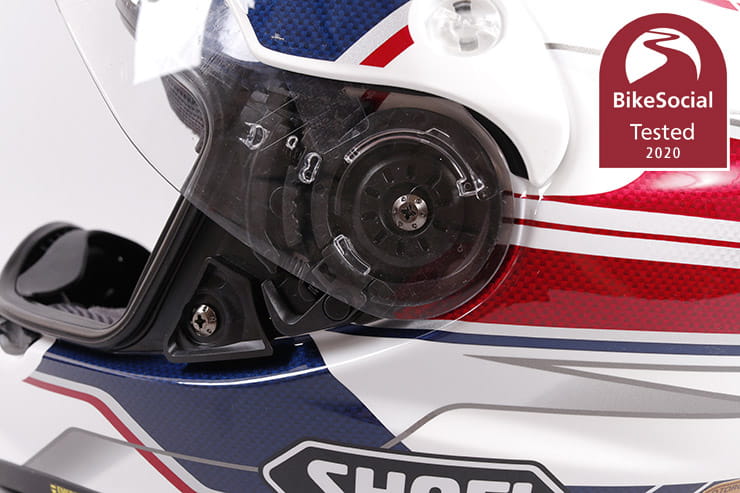 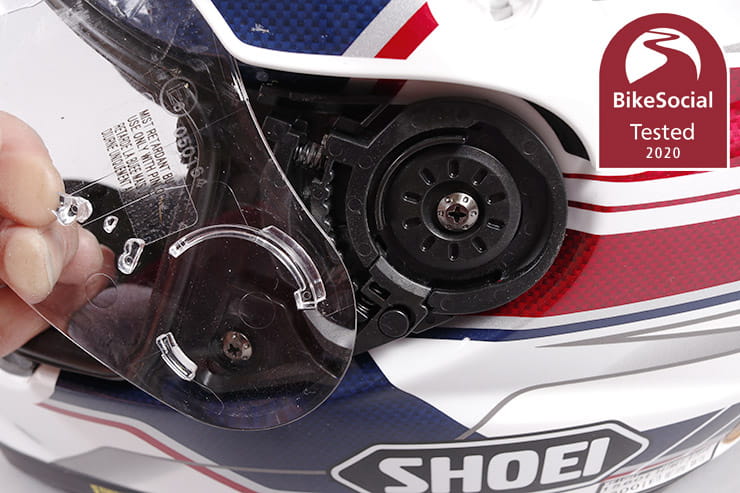 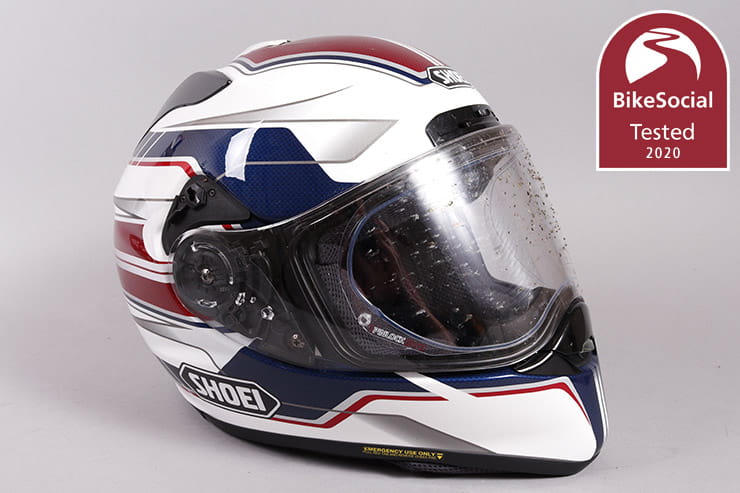 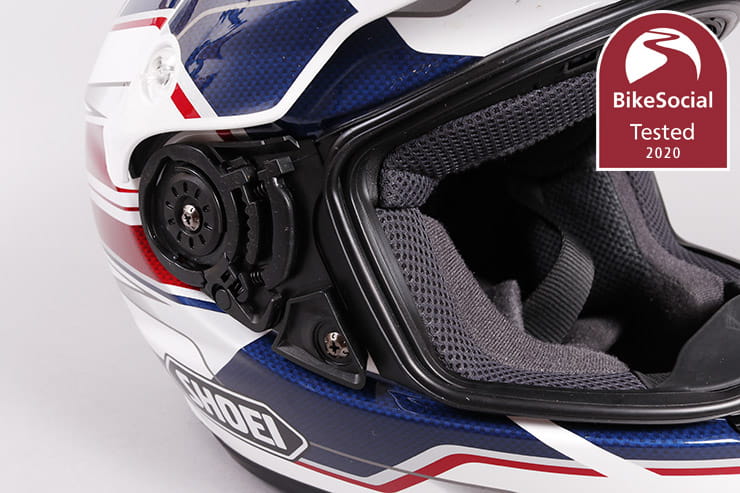 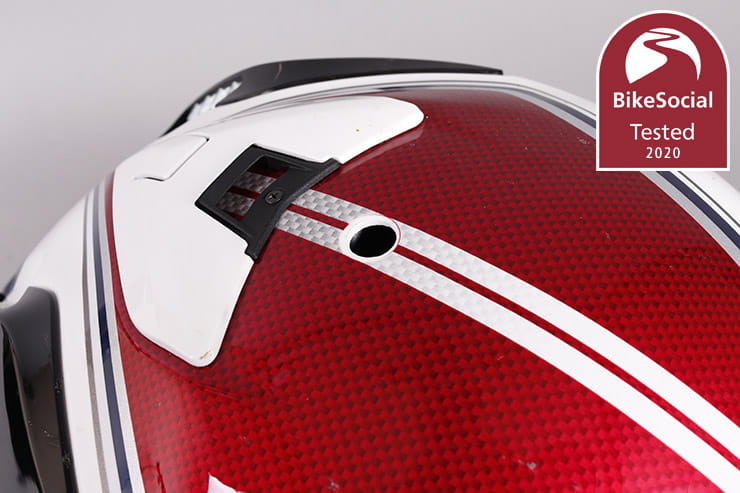 While you could use the Hornet ADV without the visor or peak, it’s not designed to do so

The visor gives a very good field of view to the sides and below, and while it isn’t a standard-shape Shoei visor, it does benefit from the company’s easy to use quick-release system.

Even with the peak in place, it’s possible to take the visor off for cleaning and to replace it, and it’s good to see that it also seals well, preventing any water from entering the top edge in the rain.

A Pinlock Evo – the top of the line anti-fog insert – is included, though spectacle wearers like me will have the visor just cracked open, or at the first of six stages of the visor opening. The ratchet controlling these steps is relatively firm, though it does stay in place. I’d have preferred to see a thumb tab on each side, or the middle of the visor as it’s easier to open when waiting at the lights with the clutch held in, but this good-sized tab is easy to find and locks the visor down fully.

There’s no drop-down sun shield, but of course the real benefit of this lid to road riders is being able to shield their eyes with the peak.

While the peak can be very easily removed thanks to a pair of rotating latches and a button (no tools required), the Hornet ADV isn’t designed to be used without it – you could, but the top vent is left open with nothing directing air down into it, and the fixing points would collect dirt.

It’s great to see that the peak is still during even high-speed use – the Schuberth E1 that I reviewed a few years back vibrated noticeably, which was extremely distracting when riding.

Theoretically you could use this Shoei with goggles, but it’s clearly not designed for it; if you take the visor off the mechanism is left exposed, and while you could flip the visor up and pop goggles in, the aperture isn’t quite big enough for my 100% goggles, so they don’t fit properly against my face. 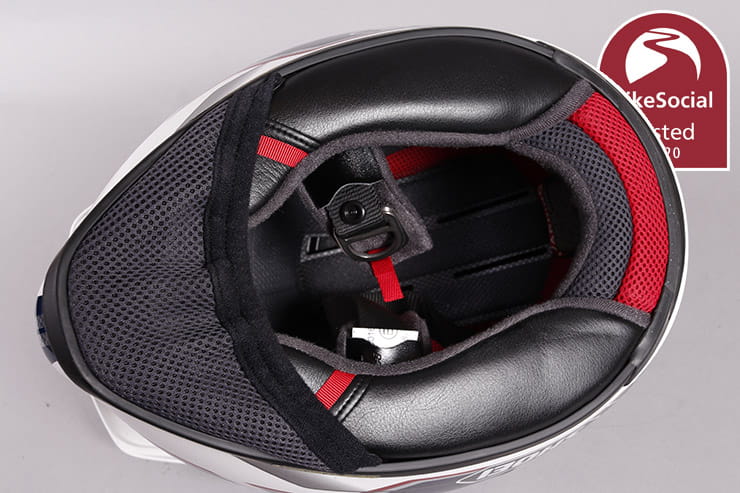 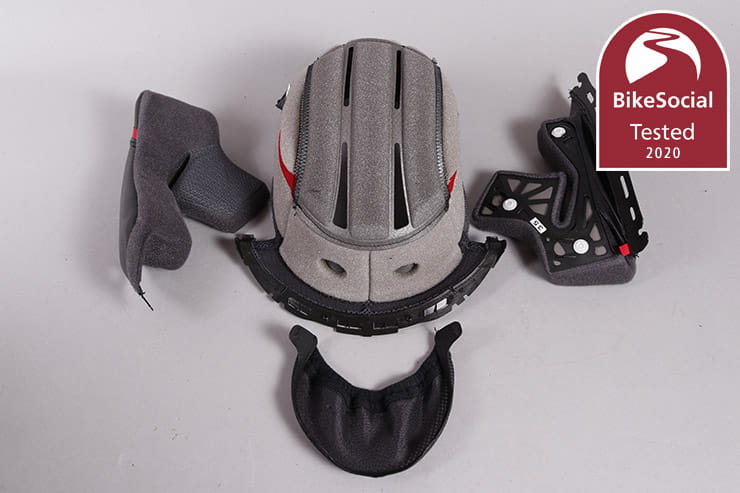 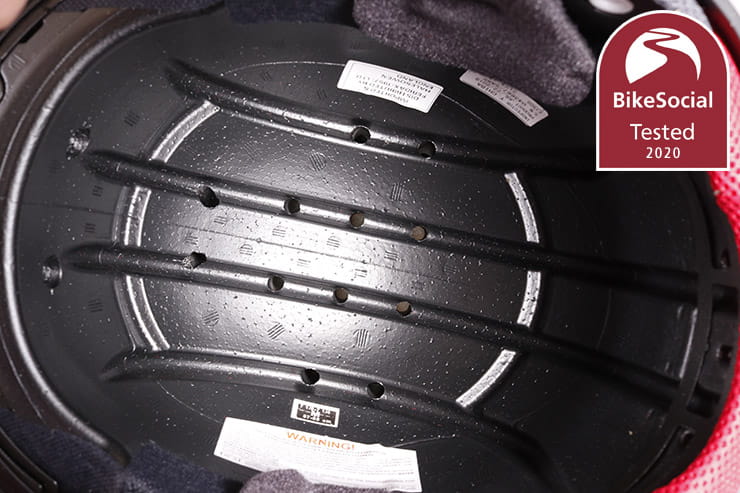 The inner shell is made up of two separate sections of expanded polystyrene – for a softer area around the top of the head compared to the front, back and sides – along with additional panels at the cheeks and chin. The plush and well-constructed lining is easily removed for cleaning, including the cheek pads, crown, strap covers and neck skirt.

The cheek pads have clearly-labelled quick-release tabs, which would allow emergency responders to pop them out in order to remove the helmet without straining the neck. 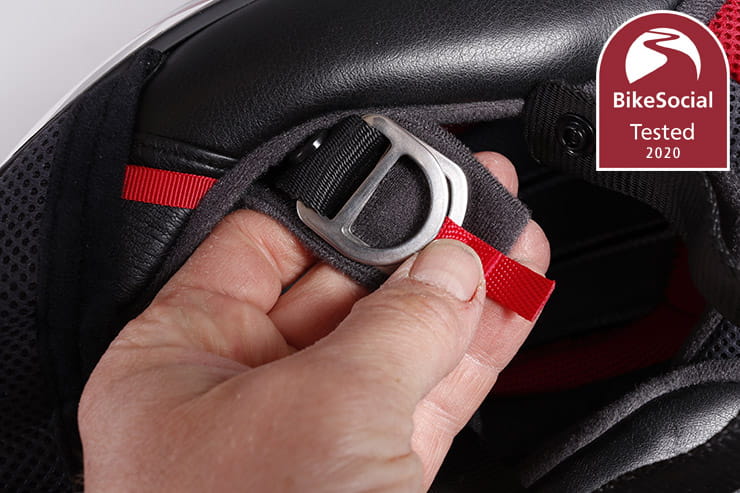 A double-D fastener is used on the Shoei Hornet ADV, which makes for a reliable fit every time though isn’t quite as convenient as a micro-metric ratchet for day-to-day use. It works well and has a button to keep the spare strap from flapping around, but as always with this design, you’ll need to take your gloves off to use it.

Many people claim to have – or not have – a ‘Shoei head’, and while this might have been partly true many years ago, it’s really not now. Fit is of course entirely subjective as we all have different-shaped heads, so you must try any lid on for yourself (even if you usually get on fine with that brand). Personally, I’ve not had an issue with any Shoei or Arai, while Schuberth and Shark (for example) sometimes fit me and sometimes don’t; you must check.

This medium-sized helmet fitted my typically medium-sized head perfectly, with no pressure points – when buying a lid you must always check for any areas that could become painful after an hour or so in the saddle, but the helmet must also be snug all over. Unsurprisingly given the high-end build quality, I find the Hornet ADV comfortable all day long.

The lining easily accepts glasses, with no pressure on the sides of the head, and the specs remaining comfortably on the nose. 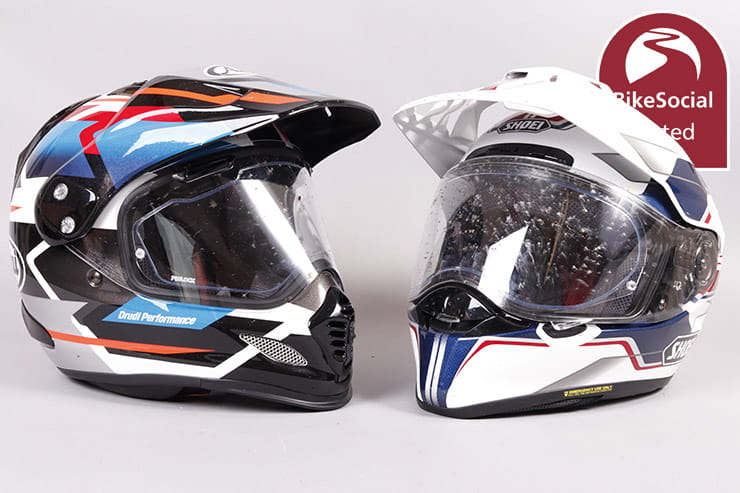 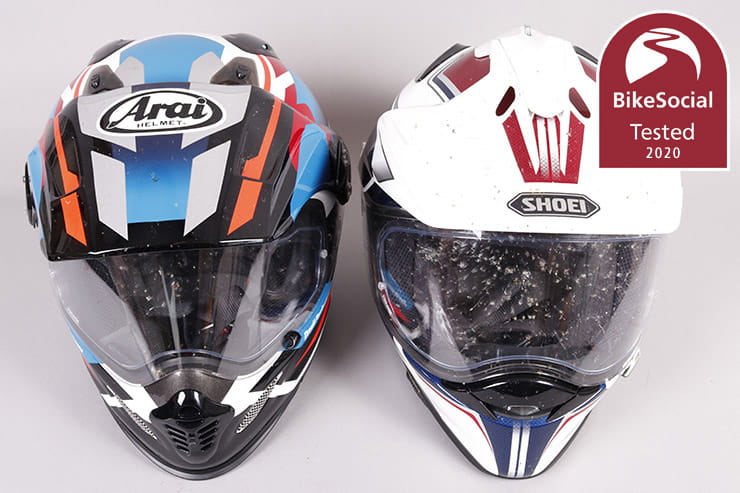 The peak does introduce noise when riding with a screen, but it’s not unique to the Shoei

Any helmet with a peak is going to be noisier than one without, and the Shoei is no different, having slightly more windblast on an un-faired bike than a standard full-face.

While some helmet brands claim to have the quietest designs, lids are wind-tunnel tested on un-faired bikes; as soon as you add a fairing or a screen you can forget everything as the ensuing buffeting makes all the difference. There’s also no helmet that is quiet enough to safely use without earplugs at anything beyond town speeds.

Don’t underestimate the noise that can be generated by a peak, given the right circumstances of your height (I’m 5’10”), riding position and of course bike – on both the Kawasaki Versys 1000 and the BMW S1000XR (both 2019 models), with the screens in the lowest position the Shoei was fine, but slide them up to the top and there’s significant buffeting. The booming sound isn’t quite as prominent as on the Arai Tour-X 4, reviewed here, but it is still there to the point that I ride with the screen lowered. It’s something you need to be aware of, and many owners who do find it a problem on any brand of helmet resort to sticking wheel weights on the end to reduce the drumming sound. 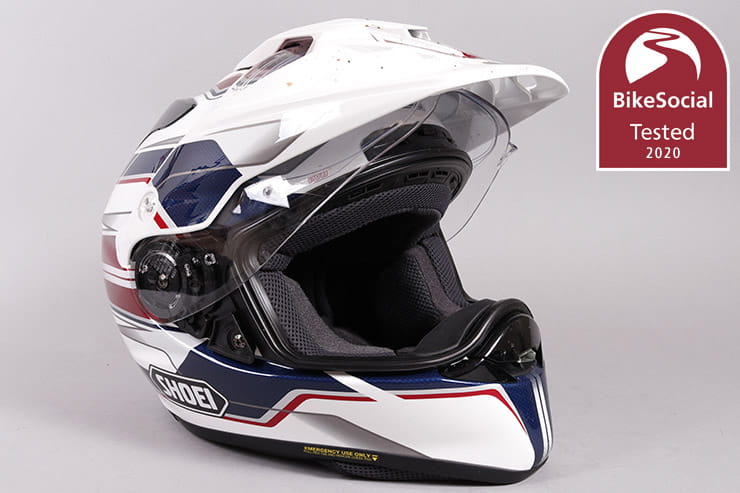 The Shoei Hornet ADV is a very well-made helmet that does add another layer of safety when riding in low sun thanks to that well-designed peak. But you have to be aware that your neck will get more tired and noise could be an issue.

The Arai Tour-X 4 retails at £30 to £40 more, and the visor is a lot more of a hassle to remove. On the other hand, it can be worn with googles much more readily (and can be run without the peak). Given the ease of maintaining the Shoei’s visor, set against its less powerful ventilation, I’d say the Hornet ADV is the more road-focussed lid, while the Arai will be likely to appeal to people needing more versatility.

Be honest with yourself – if you decide that a peaked helmet is right for you, choose based on how and where you’ll really be riding. Both are premium-quality and exceptionally well built, while both also have their advantages and disadvantages.