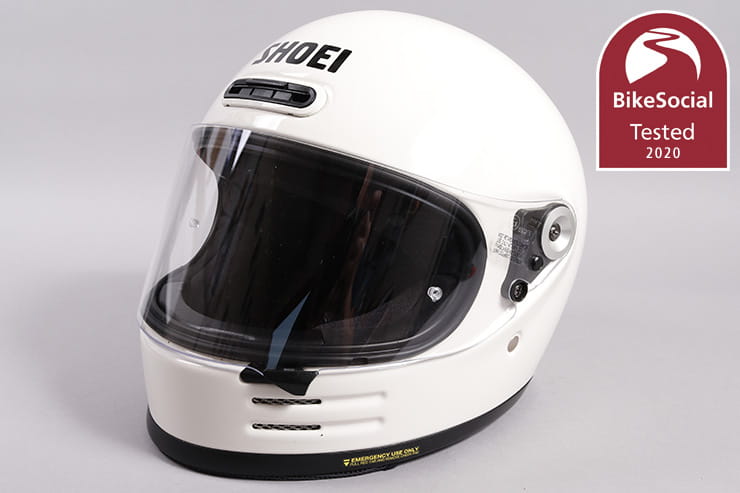 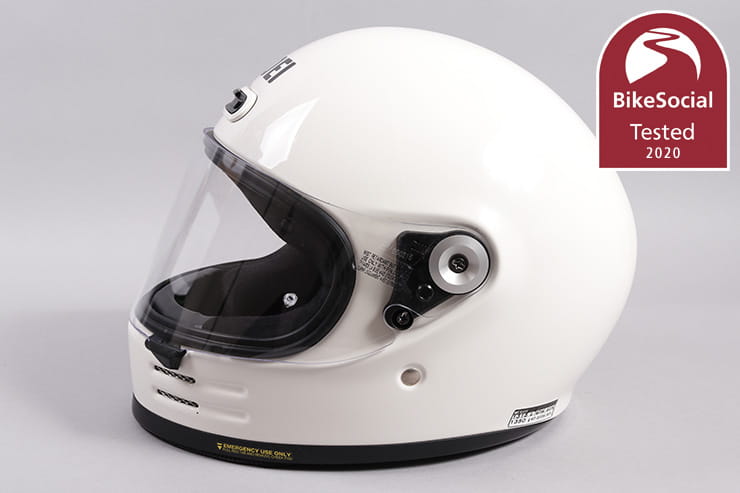 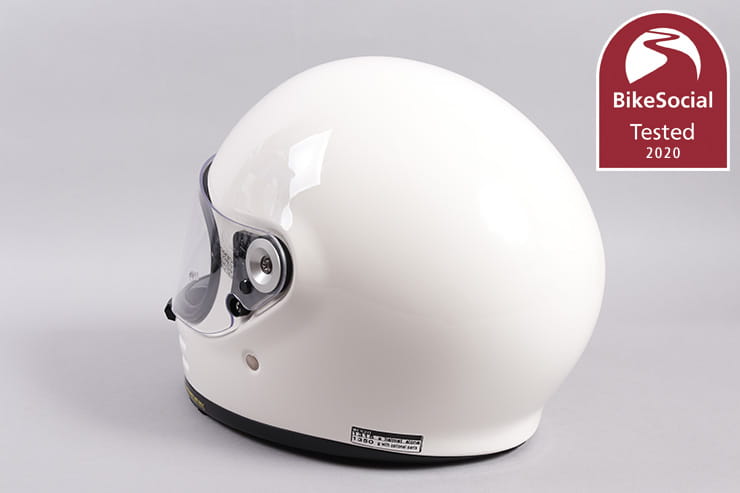 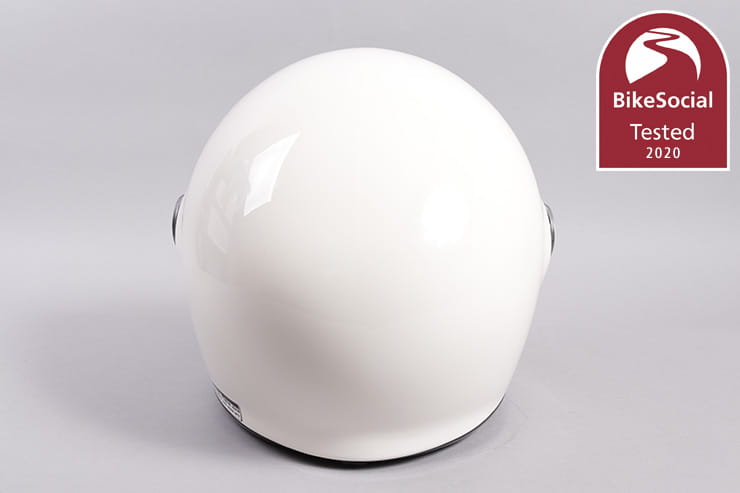 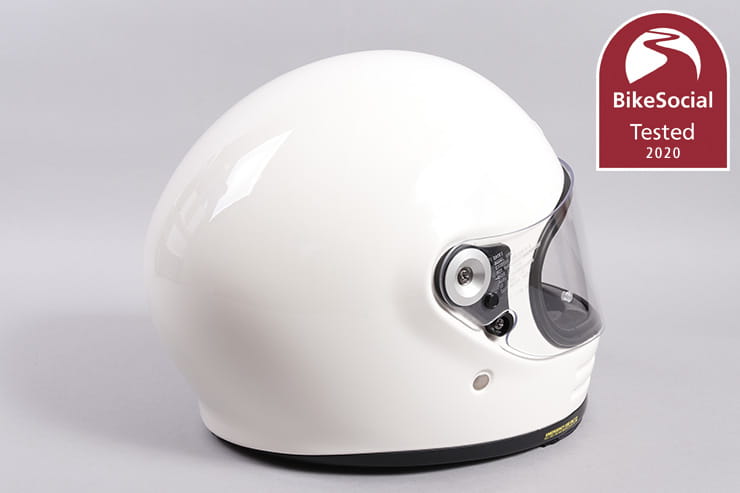 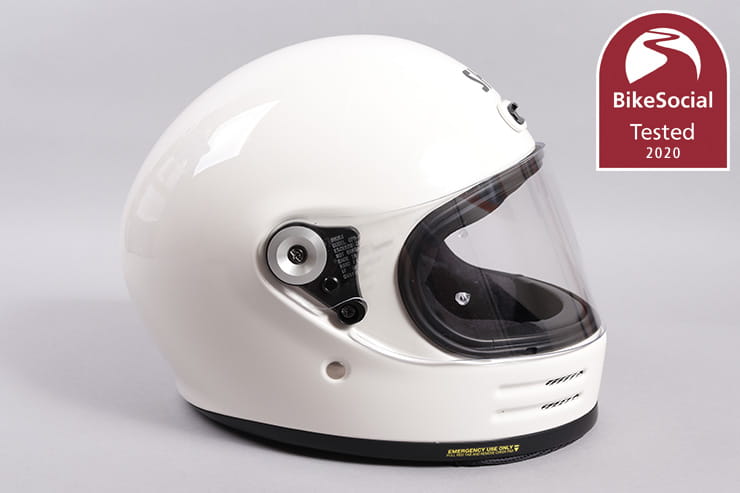 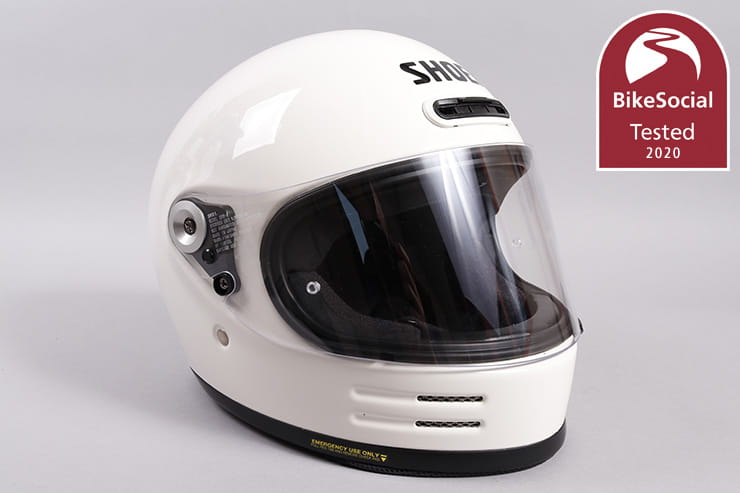 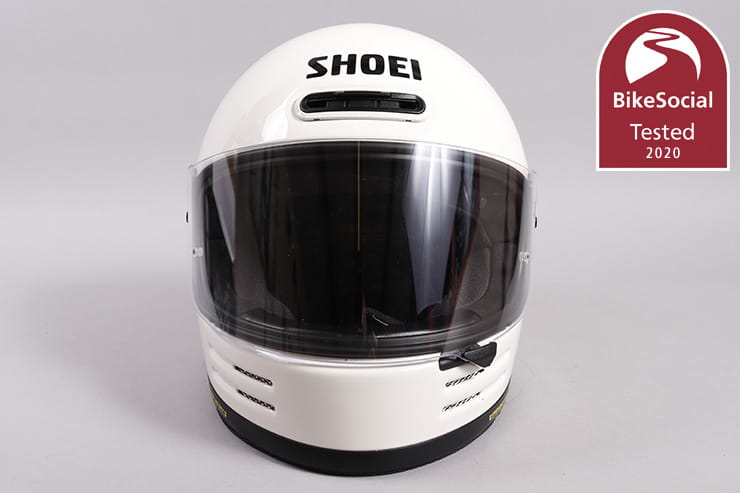 I've been wearing the Shoei Glamster for the last five months and covered just shy of 1000 miles on a variety of bikes from Honda's SH125 scooter and 500c Rebel to Kawasaki's W800 retro twin and my own retro-styled Ducati Scrambler Classic.

Styled as a modern take on a retro design, the neo-classic Shoei Glamster is targeted at the BikeShed loving, retro bike riding crowd and goes up in direct competition with helmets such as the Arai Rapide, Biltwell Gringo, Bell Bullitt and even Shoei's own Ex-Zero.

Just because the Glamster may look like an old helmet, the shell construction is bang up to date using Shoei's AIM (Advanced Integrated Matrix) construction.

This comprises a mixture of organic and glass fibres to provide a strong yet flexible shell which remains lightweight. The same construction is used on Shoei's premium models such as the NXR and Neotec 2 and is only bettered by the AIM+ construction used on the flagship X-Spirit II model.

While the overall design harks back to the late 70s when helmets had far fewer compound curves, the Glamster manages to include some more modern touches such as slight flares to the rear bottom of the shell and around the visor mounts.

With sizes XS to XXL and three shell sizes to suit – one for XS-M, one for L and one for XL and XXL – and a range of designs, the Glamster starts at £399 for single solid colours (Off-White as shown, Lagina Blue, Gloss Black, Basalt Grey and Matt Black). If you want a bit more design, a few decaled designs are available, but this does push the price up by £100 to £499.99. Whether the extra is worth it is up to you, but I personally like the simple look of the off-white base design reviewed here.

With a reported weight of 1350g (my size-L with chin curtain installed weight in at 1310g), the Glamster is no heavyweight, with some open face helmets such as the Shoei J-Cruise II even coming in heavier. Some of this lightweight is down to Shoei's AIM construction, but its also important to note that the Glamster is quite feature-free with no integral sun-shield, little padding in the chin bar and minimal venting. In use, the difference between this and other heavier helmets isn’t really noticeable, even after a long day in the saddle. 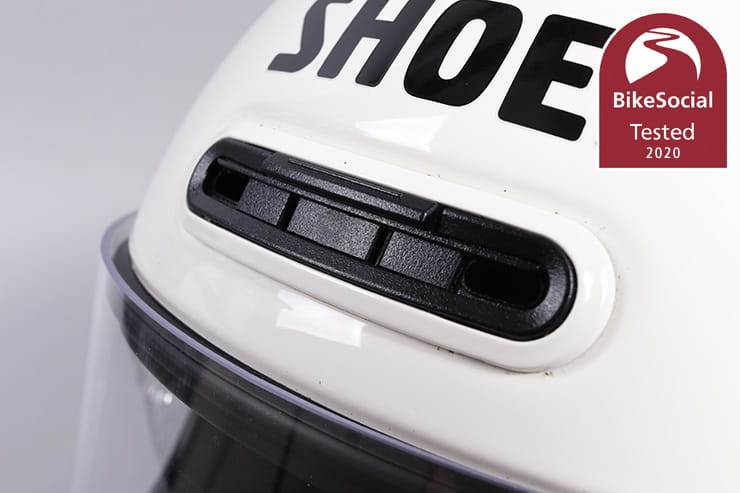 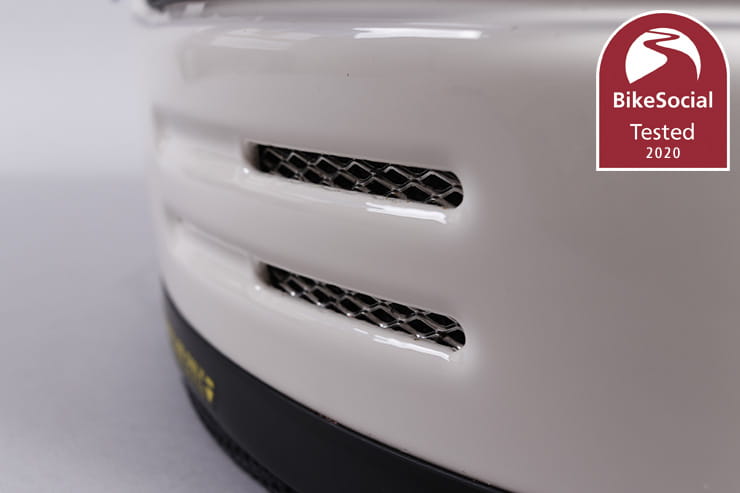 In keeping with the retro design of the Glamster, venting is kept to an absolute minimum with vents in the chin bar and forehead only.

The chin vents (slots?) are always open and provide some air flow both to the visor, to help prevent misting, and to the inside of the helmet. These are protected with wire mesh inside to prevent ingress of bugs and other foreign objects, and the entry points inside the helmet are also covered with perforated mesh fabric, though this does mean that airflow is limited.

The forehead vents can be closed by a simple slide mechanism and provide direct air flow to the forehead. These are totally unhindered and can (and do) allow bugs to enter the helmet at high speed. The forehead vents also supply forced air to channels in the moulding of the EPS liner providing some airflow to the top and back of the head. What look to be outlet vents in the rear neckroll do not appear to connect to any of the internal channels and are more for styling than function.

Even with the visor closed though, air flow up from the chin area means that the Glamster is unlikely to be your first choice as a year round helmet, though the inclusion of an additional chin curtain is a nice touch and does make a noticeable difference to both wind and noise from this area. 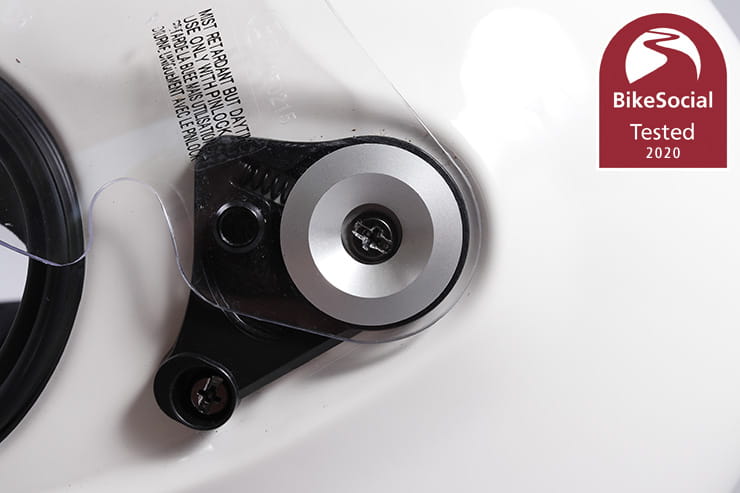 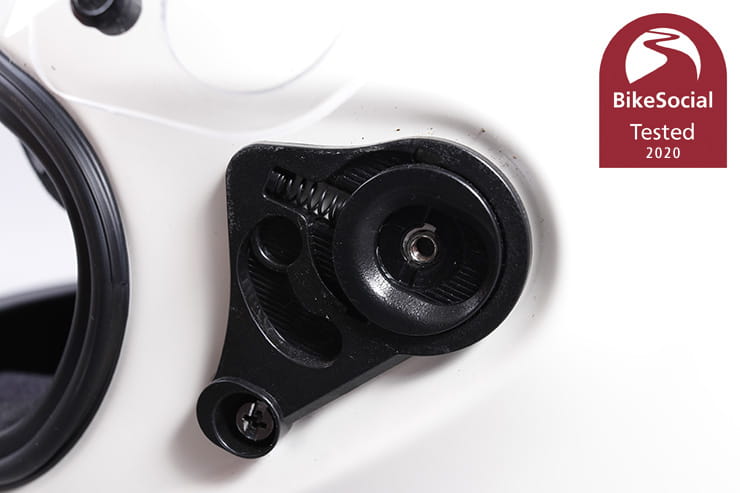 For me, the visor on the Glamster is its weakest feature. While I understand that Shoei has styled it to recreate the flat visors of old, the whole design and mechanism of opening and closing the visor makes the Glamster feel decidedly clunky and dissatisfying.

The visor is held in place each side by aluminium covers which are screwed in place. While the screw heads are just about big enough to allow the use of coins, keys or other make-shift screwdriver you may have about your person, they are also made of soft aluminium, and so chew up all too easily.

Once the visor is in place, the sprung, over-centre mechanism allows for three opening positions – fully open, half open and fully closed -  with no way of cracking the visor open just a little, to allow some extra ventilation. The sprung mechanism also means that the visor closes under force once you get past the half-open position. Once closed, the visor can be locked by the use of an interlock, which I also found difficult to unlock on the move, especially as it's on the left hand side, meaning that to open the lid quickly at lights, you need to take your hand of the clutch (no mean feat when riding a Ducati with neutrals in all the places you don't want them, and none where you do).

My visor troubles didn't end there though as once the (supplied) Pinlock insert was attached, no matter how much adjustment was made, I couldn't find a situation where the top of the visor would seal against the aperture seal (meaning no ingress of rain), but still allowed the top of the Pinlock to pass without snagging. This meant that either the visor was difficult to open as the insert fouled, or the visor leaked due to a massive clearance gap at the top – neither is ideal, nor expected on a lid at this price point. 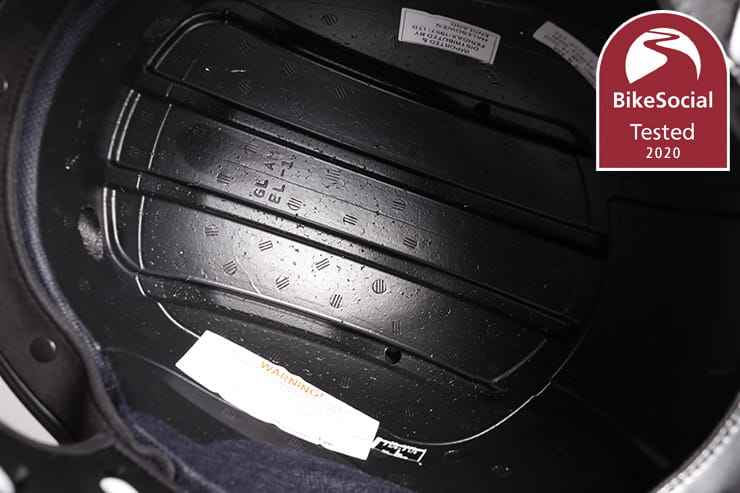 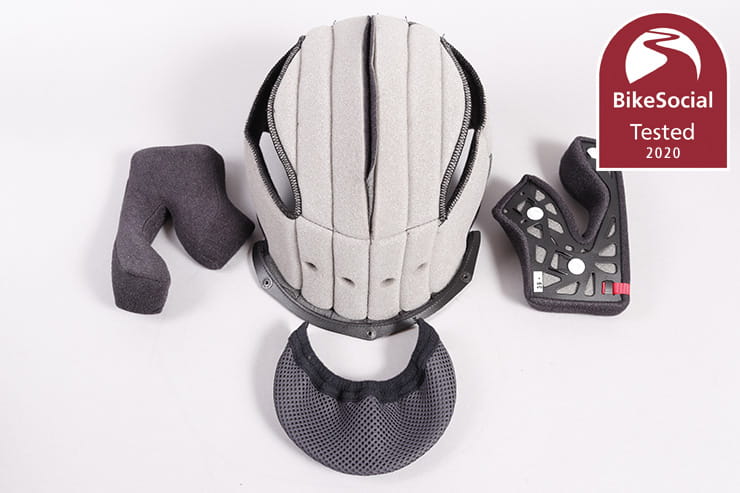 While the visor and mech is surprisingly un-Shoei-esque, the lining goes someway to redeeming the helmet – plush and fleecy, the fully removeable and washable lining reminds you why Shoei helmets have been so popular for so long.

The cheek pads are equipped with emergency removal tabs (and suitable decals on the shell), making removal of the helmet (should the worst happen) easier and much less likely to put additional strain on your neck. The additional chin skirt, while difficult to fit due to the tight installation of the foam against the shell, is a useful addition and a nice touch.

The lower skirt to the lining is finished in a leather look finish adding to the retro look and feel of the helmet, while also meaning that should you accidentally stand your helmet in water or condensation, the inner lining remains dry. 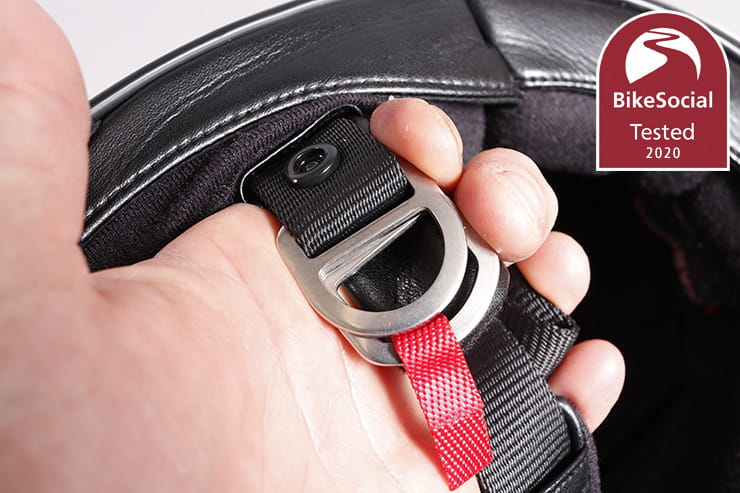 True to its retro looks, the Glamster fastens with a double D-ring and a press stud to fasten the strap's loose end. While these may not be as easy use as with gloved hands as a ratchet system, it does ensure a tight fit every time. The strap cover is also removable for washing, and is held in place with a simple press stud.

As with all helmets, fit is very subjective so I really would recommend trying on a range of styles and even sizes.

After moving to a large for the Shoei J-Cruise – I now default to a large (from medium – at 59cm, I sit on the cusp between sizes and need to try on both to see which best fits) and the Glamster fits nicely in a large.

While the Glamster is not quite as comfortable as other helmets I have worn all day, it is  certainly not painful in anyway and I can quite easily ride a full day in it with no issues.

Due to the rounded design, exposed chin vents and open bottom, the Glamster is never going to be whisper quiet, but that smooth shell does go along way to avoiding any whistles, wobbles or other wind deflection. I did get some noise from the visor when fully up, but as this was only when riding slowly through villages, it doesn't worry me.

I've ridden with the Glamster on a variety of naked bikes and with the visor fully closed, its no noisier than helmets such my own Arai Renegade (a deep chin bar, semi-street styled lid that is no longer in production). The neck skirt definitely helps with some noise reduction so its worth leaving it installed, but you will certainly need ear plugs for all but the shortest of rides.

Would I choose the Shoei Glamster if this were to be my only lid for day to day wear, including commuting? I'd have to say no. There are plenty of helmets available at this price point that do a much better job of covering all the conditions you are likely to see on a daily basis.

If you are looking for retro styled helmet to go with your retro bike though, and if you can live with the visor mechanism, the Glamster makes a great choice.

Do you own a Shoei Glamster? Email us at enquiries@bikesocial.co.uk to tell everyone what you thing of it…