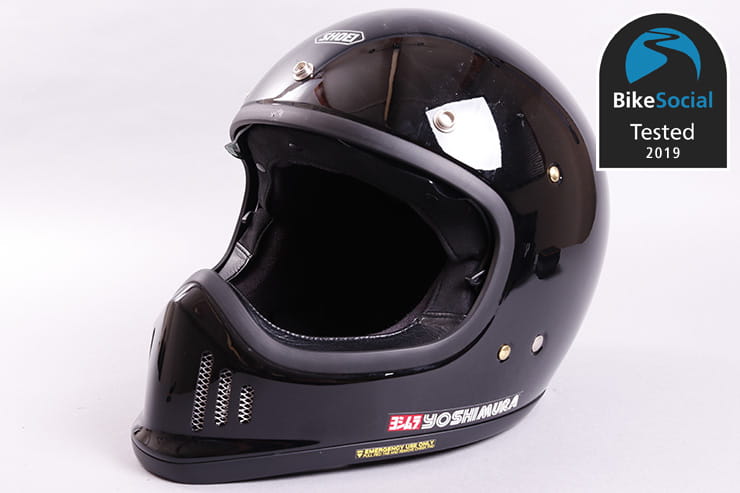 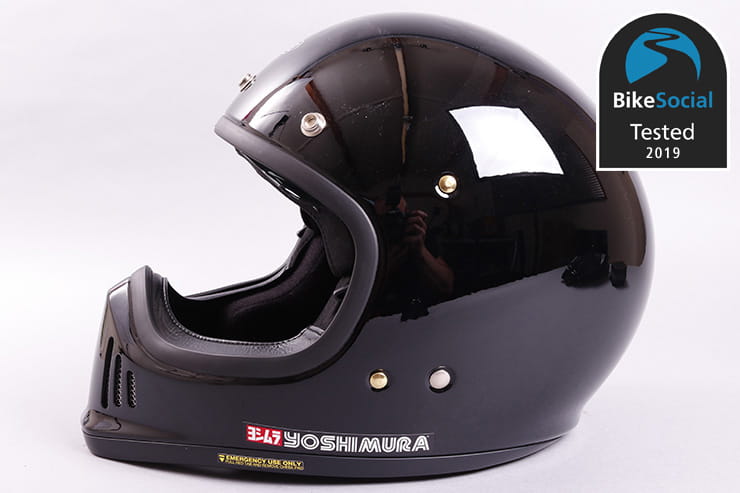 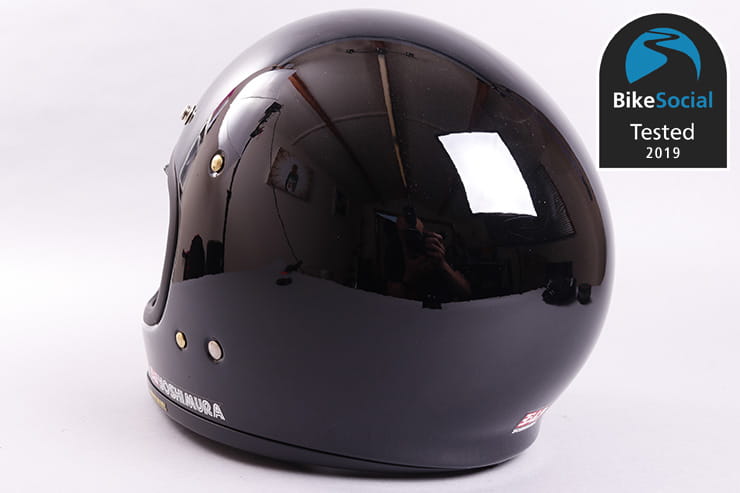 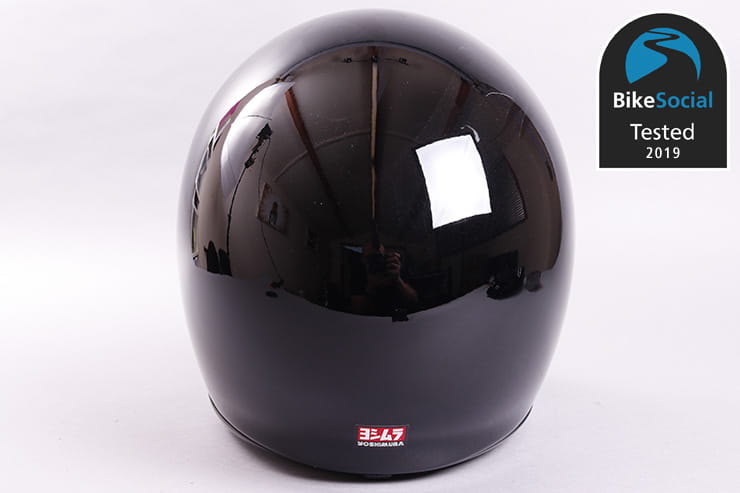 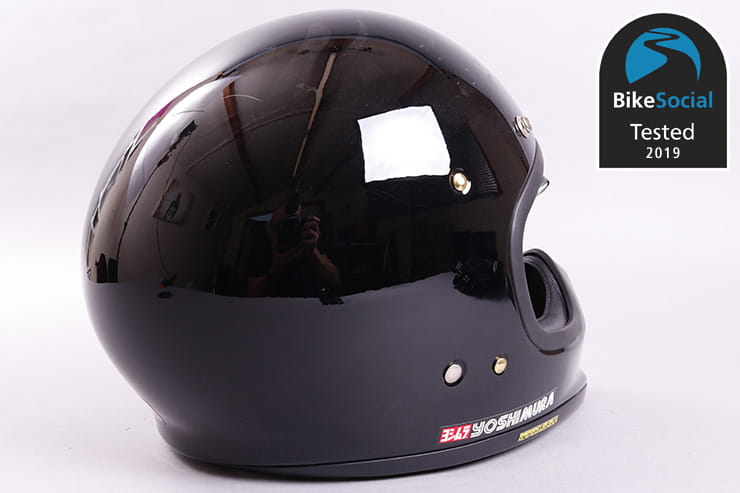 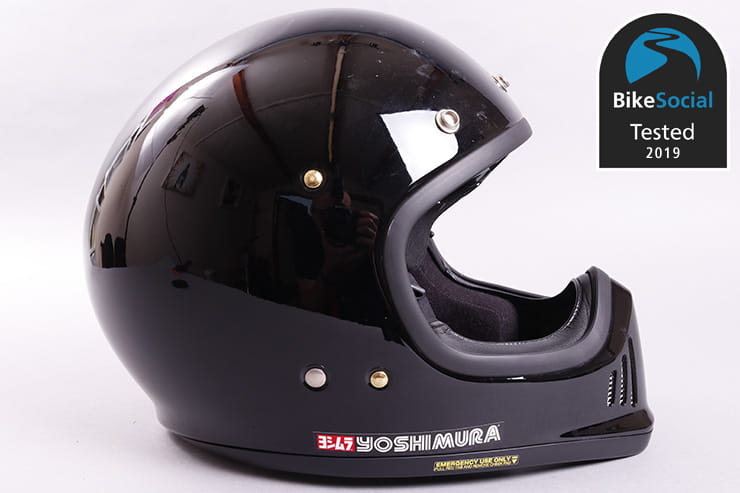 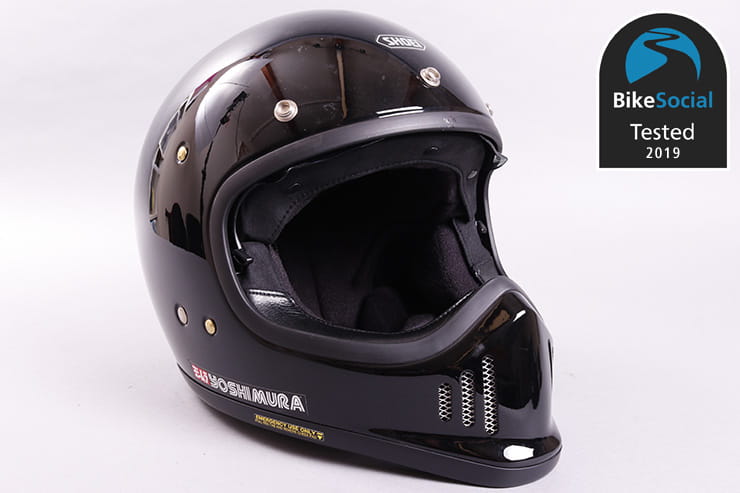 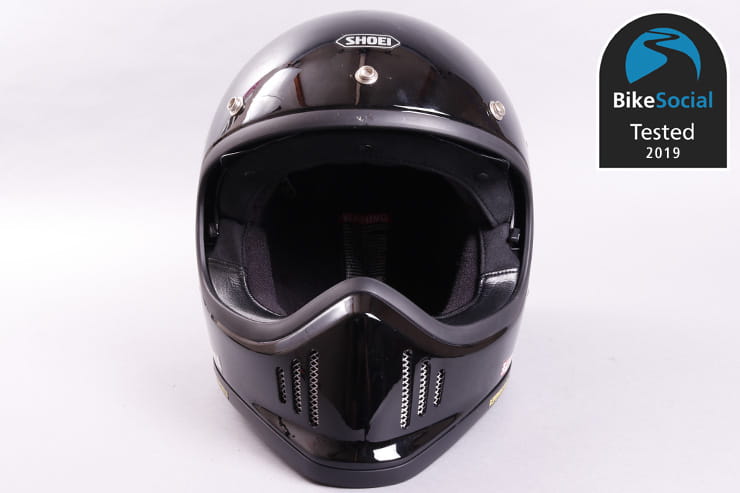 Based on the Ex-5 of the 1980s, the Shoei Ex-Zero motorcycle helmet on review here is very close in design, yet has many of the safety features you’d expect of a modern lid. It’s perfectly suited to many classic, custom, café racer and bobber bikes. 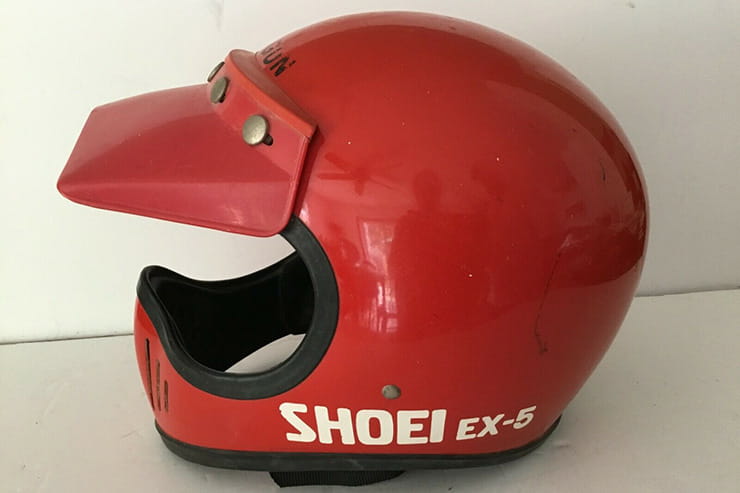 An original Shoei Ex-5, on sale at eBay

The multi-composite fibre shell is extremely well finished with a smooth gloss. I’d have liked to have seen the Shoei label lacquered in, but others might want to debadge theirs, so it’s a wise move (the Yoshimura stickers are my own small tweak and add at least 10bhp to any bike).

The rubber around the goggle aperture is very well applied, while the leather-style trim around the nose area and lower skirt looks brilliant. Equally, the mix of brass and plain-finished rivets and poppers look great, as does the wire mesh in the chin.

Three outer shell sizes are used in construction; one for XS-M, one for L and the other for XL-XXL.

At 1141 grams, the Shoei Ex-Zero feels comfortable on the head while maintaining a good, solid shell. 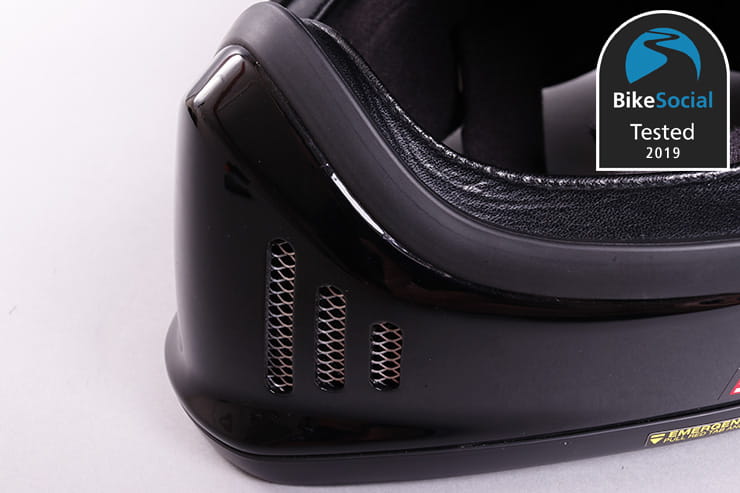 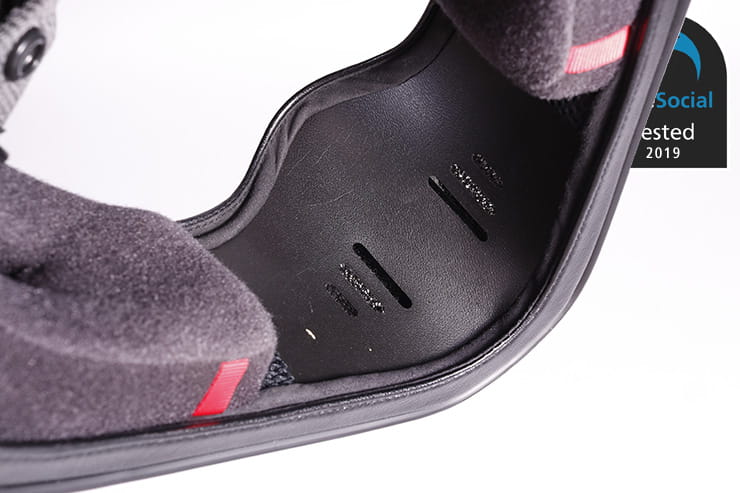 With the large aperture and always open chin vent, the Ex-Zero is pretty airy, though despite the channelled inner liner having two holes running into the visor slot, air will struggle to move around the top of your head. There are two small holes in the base of the rear too, which allow a tiny amount of air to be expelled from the back, but you wouldn’t notice it. In hot weather at low speeds you might find the top of your head gets a little sweatier than it would with a full-face lid featuring decent vents, but this is basically the same as most open-faces when it comes to keeping the air moving around the top of the skull. 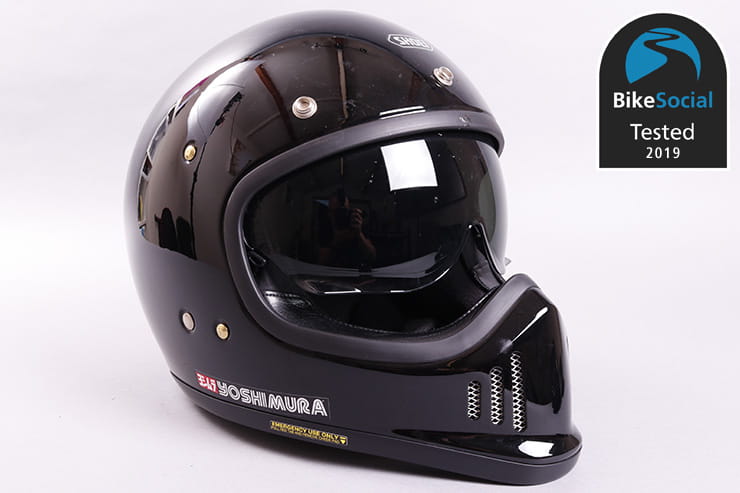 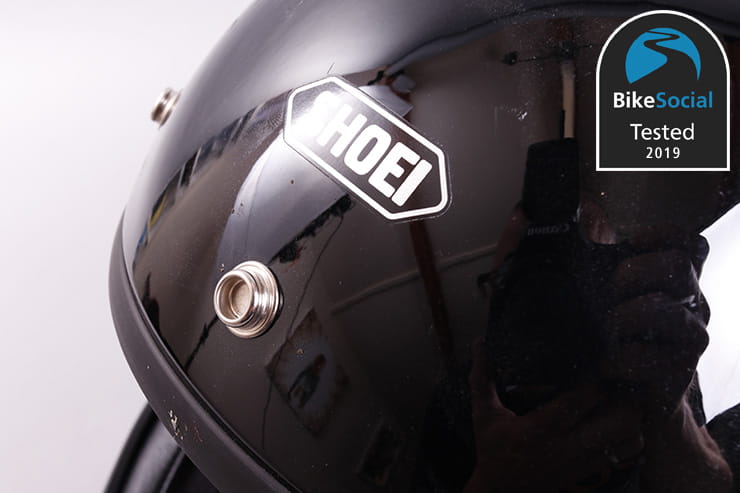 A clear visor is supplied, though you can also buy them for just under £40 in dark smoke or yellow – they’re the same visors as used in the Shoei J•O open-face.

With such a wide aperture, and the fact that the visor doesn’t seal, fogging isn’t an issue, so there’s no anti-mist coating or a Pinlock insert.

The visor is very cleverly hidden in the top of the lid, with a small tab on either side allowing you to drop it down into position. Using a pair of neat little levers, you can also set the position the visor drops down to, to suit your nose – a great touch that adds to the high value of the design.

You can of course also use goggles. I have some 100% Barstows, which look great, fit well, and grip enough in the recess on the rear of the lid. My only tiny gripe is that, sometimes, when pulling the goggles down from the top they can slide the visor down with them, leaving you to jiggle the visor back up while holding the goggles. With two hands it doesn’t happen as you pull the goggles clear – it’s when riding and grabbing them quickly with one hand that I occasionally get caught out. If you’re not going to use the visor, you can remove it (as the visor’s so easy to remove, keeping it clean isn’t a problem).

We’d usually talk about the quality of the seal here, but of course it doesn’t seal. Do know though that you will get rain and drafts in, as well as the chance of a stray stone hitting the tip of your nose or cheek. But unlike an open-face, your teeth are safe.

On a bike with a screen, like the Versys 1000, turbulence can be felt under the visor, but really, this is a lid that very few will wear on a sports tourer or adventure machine. 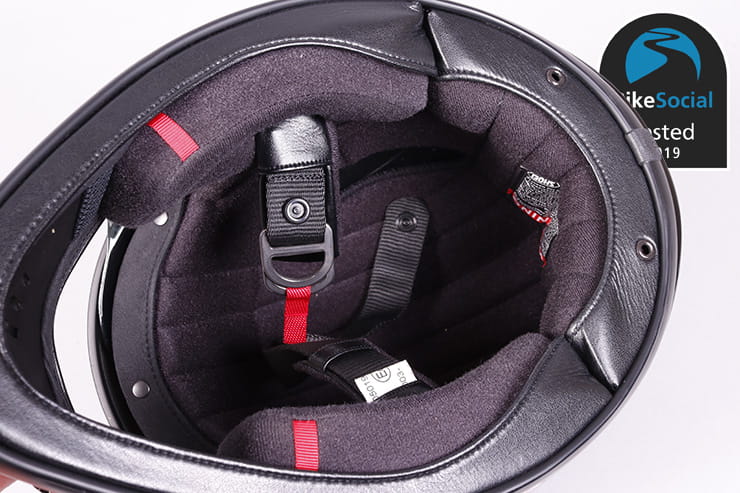 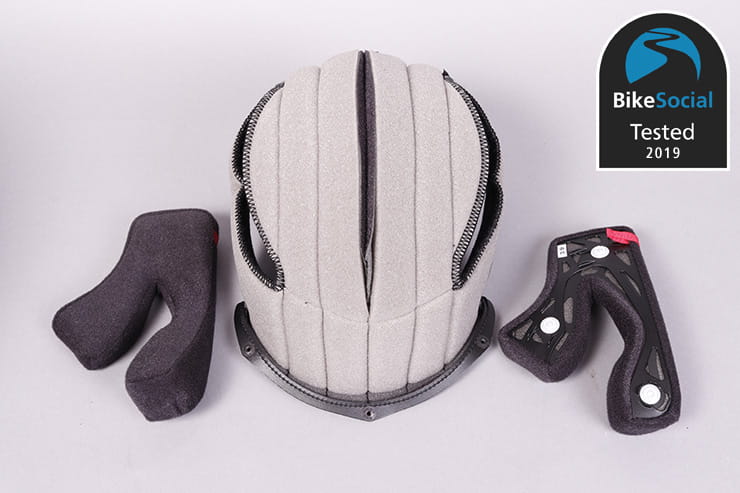 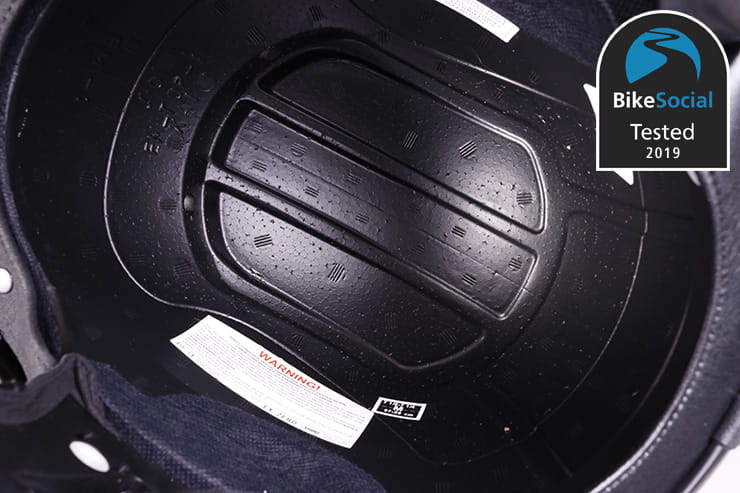 The plush lining is fully removable, making cleaning easy. The cheek pads also have emergency pull straps, which make it much easier to remove the lid in an emergency.

Due to the stepped design of the slim shell, you will struggle to fit intercom speakers into the Ex-Zero.

The Ex-Zero has a Double-D fastener with a plastic popper to keep the loose end from flapping. A micrometric buckle is quicker and easier (especially with gloves on), but this style suits the retro-look.

The popper’s set a bit high on the strap, so is a little more awkward to get to than on some other helmets, but it’s no disaster.

Fit is entirely subjective, but like all Shoeis the Ex-Zero fits me great. Many years ago I had more of an Arai head than a Shoei, but over time manufacturers have tweaked their designs and a comfortable fit for all is far more likely.

I wear specs and have no problems fitting them in at all, and despite the open look of the inside of the helmet, it grips my head well. The cheek pads have cut aways for your ears to pop into and feel slightly unusual at first, but never uncomfortable.

Despite its slim form, the Shoei is a good, comfortable helmet that doesn’t lift at speed, the only quirk I’ve noticed is that I’m aware if it’s not perfectly straight on my head as my nose just touches the visor on one side – a little skew and I can feel it’s not right; something you don’t notice with a standard visor that covers your face. 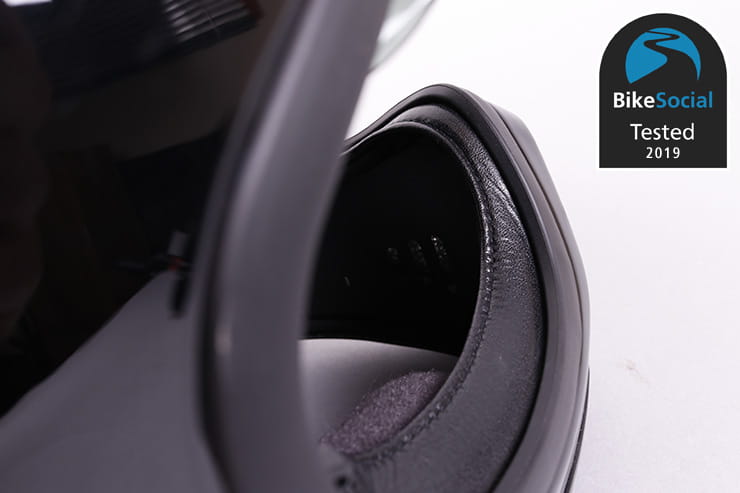 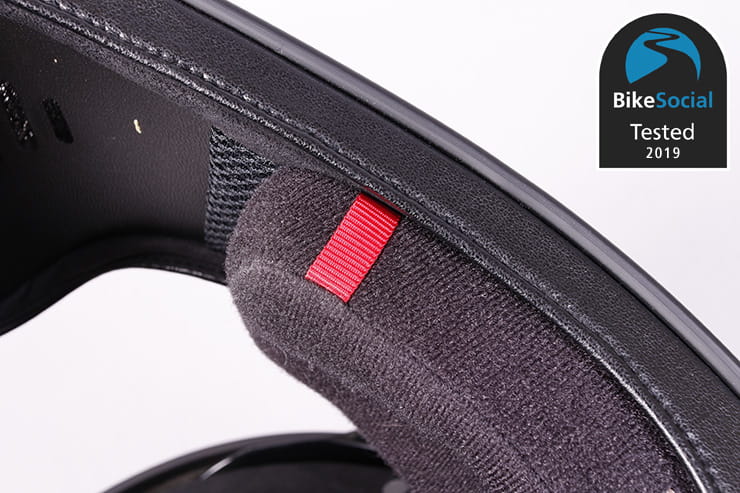 As with every other helmet on the market, ear plugs are required when riding at anything more than town speeds. The Ex-Zero has a smooth form that doesn’t cause any undue or unexpected noises, but with the wind pounding into the aperture, unless you’re riding fairly sedately you’re best wearing ’plugs. Of course, there’s a good chance you’ll be on a naked bike (minimal turbulent airflow) at a less rushed pace, so check out our feature on earplugs to be sure. 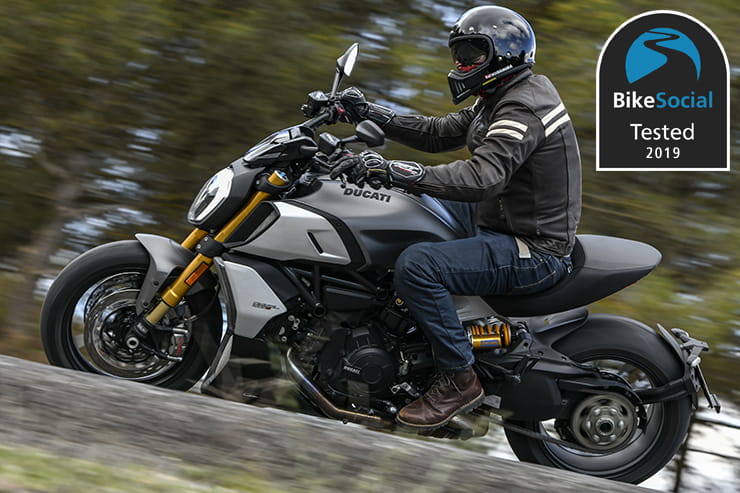 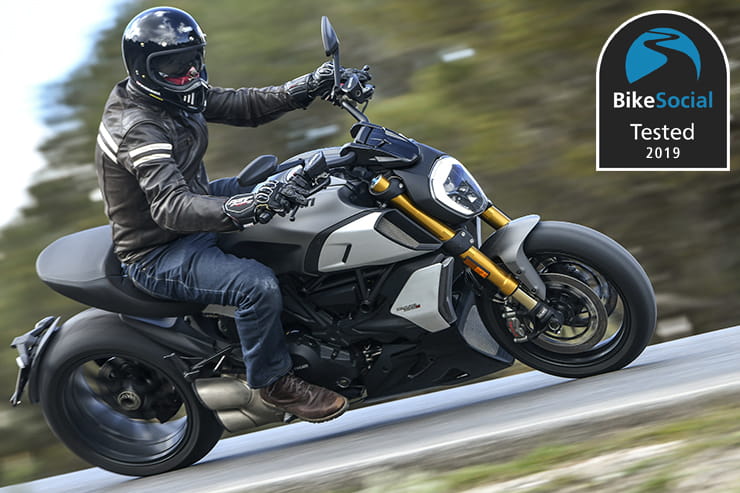 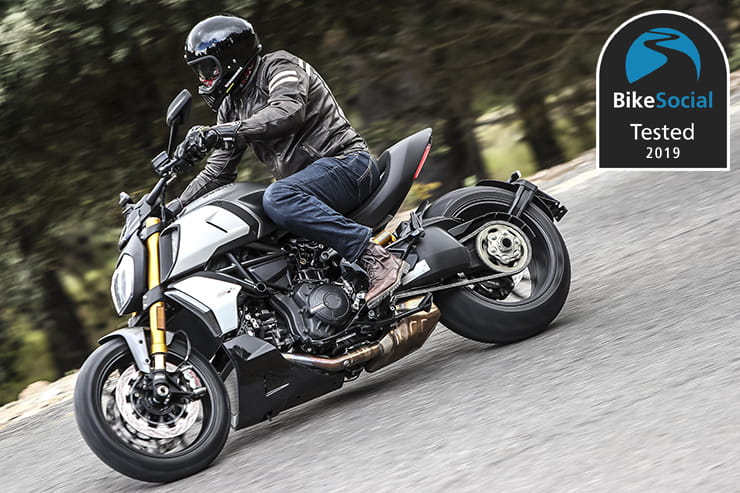 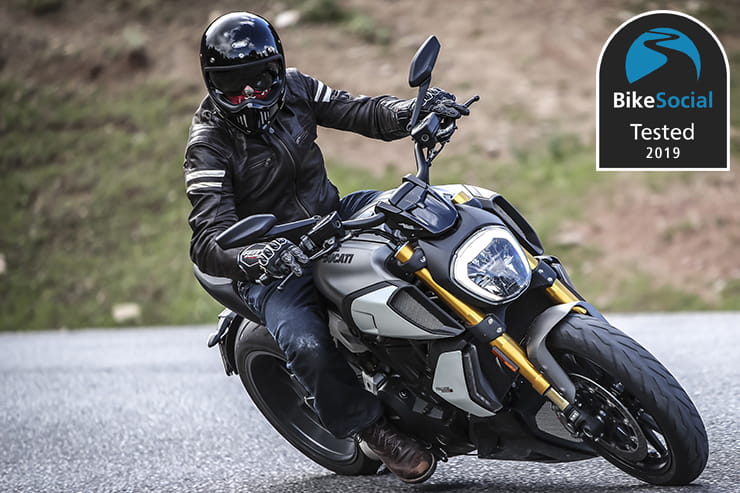 There’s no denying that the Ex-Zero is a pricey lid for one so relatively niche, but it’s in the details that it excels, like the trim around the neck and nose area.

The Shoei looks great on the right bikes and offers more safety than the open-face I’d usually wear on Harleys and the like. If you have a bike that suits the style and aren’t expecting the levels of performance you’d get from the likes of similarly priced full-face Shoeis, the Ex-Zero is a great helmet.