Why do some petrol stations make you take your helmet off? 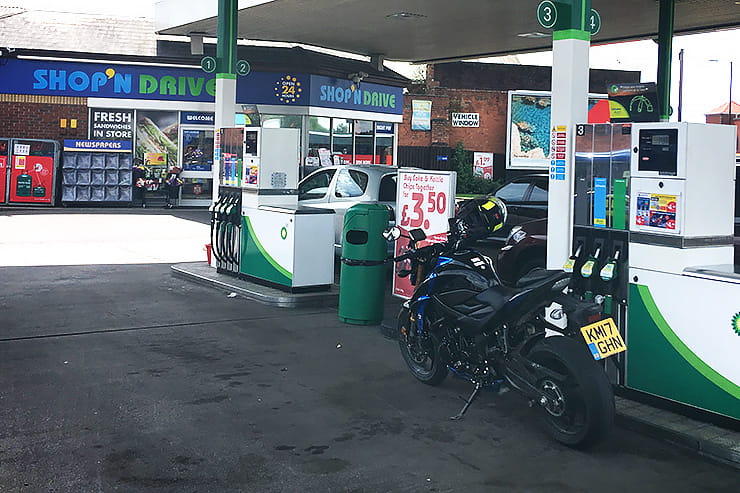 Have you ever pulled in for petrol to hear a muffled voice coming from the canopy as you try vainly to obtain fuel from a frustratingly silent pump? Cue puzzled looks from you towards the cashier while the loudspeaker continues its muffled tones; ‘Me?’ you ask, pointing at your chest. Then the penny drops… the reason you can’t really hear them is a combination of a poor quality Tannoy system and surprise, you’ve got a helmet on.

There are increasing rumbles on the internet about some fuel stations refusing to sell petrol to riders who have their helmets on; it happened to me recently and I’ll admit to feeling a little put out, like I’d been discriminated against.

Surely not me – I’ve got a nearly new bike in good condition, I wear the correct gear and I’m not the sort to steal their petrol. How dare they. Then I took a breath, thought about it, took my helmet off and bought fuel.

Why do you have to take your helmet off to get fuel?

Why do some stations make you remove your lid? Well, the margins on fuel aren’t that great – the garage certainly isn’t making £1.25 or so on every litre it sells you; that’s why most of them have shops attached to sell overpriced water, frothy coffee and snacks once you’ve been enticed in. Or they’ve done away with staff, gone card-only, and simply want to attract you into their supermarkets.

But let’s get to the heart of the matter: theft. Not just theft of their petrol, but theft of your motorcycle. Not to mention the bullying and intimidation of their staff.

When I helped to write the tactical guidelines for my then employer, Merseyside police, about how to deal with motorcycle theft at source, it became very apparent that this wasn’t an issue that was going to be solved by the police alone; the business community has to help, as do the general public.

Among all of the other recommendations – and there were many – was an action on petrol stations not selling fuel to criminals on motorbikes.

Fuel Stations are, rightly so, very heavily regulated; the Petroleum (Consolidation) Regulations 2014 state that fuel stations shouldn’t decant fuel to anyone under 16 yrs, but when we visited them we got the same answer over and over again; “You’re [the police] not here to protect us all the time.” We listened to accounts of staff being threatened, theft of petrol, or on one occasion a gang of ten on a mixture of off-road and road-legal bikes filling up, and someone throwing a twenty pound note at the cashier as if that was going to make it all better. 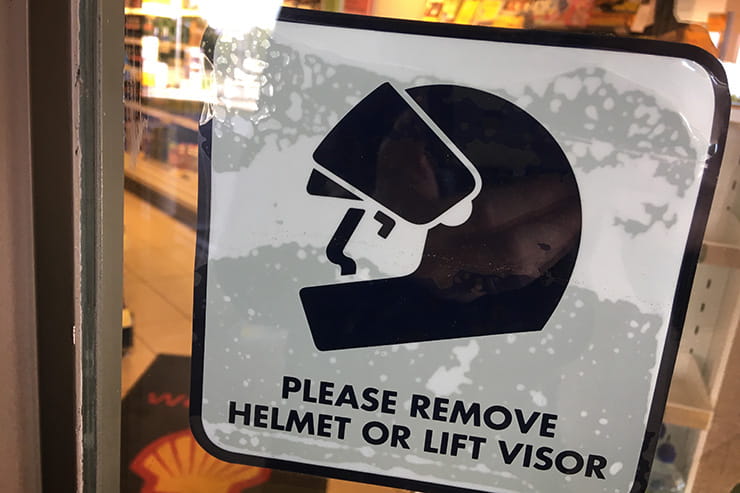 Different petrol stations have different policies when it comes to removing your helmet, but in many cases it’s part of a tactical decision in order to help identify those stealing motorcycles and using them for crime.

So what has that got to do with us law abiding motorcyclists?

The fuel station staff don’t know you, and as public feeling towards riders on off-road bikes making a nuisance of themselves has grown, those criminal riders have started to use stolen road bikes. With a perception that the police are powerless to stop them, criminals are using road bikes while they go about their activities; we’re not talking petty stuff here – it all points towards serious organised criminality, and they’re doing it on bikes that are stolen from innocent riders.

Criminals on stolen motorcycles know they can ride normally, blend in, and still have a viable means of escape if they’re challenged by the authorities. When PC Edwin Sutton of the Metropolitan Police knocked a suspected thief from a scooter with his police car it led to a misconduct investigation by the Independent Office for Police Conduct that lasted for nearly two years. He was eventually cleared of any wrongdoing, but just because the officer was cleared on that occasion, it doesn’t mean that it’s game on and that all police officers will be cleared in any future investigations where they deal robustly with suspected criminals on motorcycles. With that in mind, Police Forces should have a strategy in place that protects their staff and the public when dealing with criminals who use motorcycles as their vehicle of choice.

So how does this affect you? If fuel stations in areas with high rates of motorcycle-enabled crime adopt a policy of not serving to customers wearing a helmet – or with their face covered – they disrupt criminals. They’re disrupted because they won’t want to show their faces, so they’ll go to a different petrol station where they can get fuel while wearing a lid.

By denying criminals freedom of movement, the police start to control where these criminals go, and can maximise the opportunities to gain intelligence or take positive action. It’s not rocket science – it’s all about the police forging good links with the local community. You’re part of that community.

Also, if you take your helmet off, the staff aren’t going to feel threatened or worried that the interaction is going to end in a theft or confrontation, and it will be a much nicer experience all round.

You can do your bit to help reduce crime

Imagine having your bike stolen; it’s going to affect you and your family financially and emotionally. Then imagine seeing it come out of a petrol station being ridden by the person who broke into your garage. Into your home.

If the rider has had to take their helmet off then there will be CCTV of them, which the police can act on. However, if the rider hasn’t had to take their helmet off there’s absolutely nothing that you or the police can do because there will be nothing of evidential value, except a single piece of intelligence to say that a stolen bike was there. If that intelligence is being repeated all over the city, it’s a much larger problem for the police than if it’s only happening at a handful of fuel stations.

It’s a balancing game – being proportionate always is – and fuel retailers across the country have different policies in relation to customers removing helmets. but good links between the police and the community help to fight crime.

The police do need to tackle the issue directly though and actually follow up on the information, otherwise it’s a complete waste of time.

When race teams reduce the weight of a bike by a tiny amount they know, on its own, it isn’t going to win a GP, but as part of a much wider package it might. Taking your helmet off is one of those little things; a small part of a much bigger picture so, as with all members of the community, be it police officers, business leaders or riders, do your bit if asked.

Enabling police officers to do their job effectively without fear of prosecution is another thing entirely.