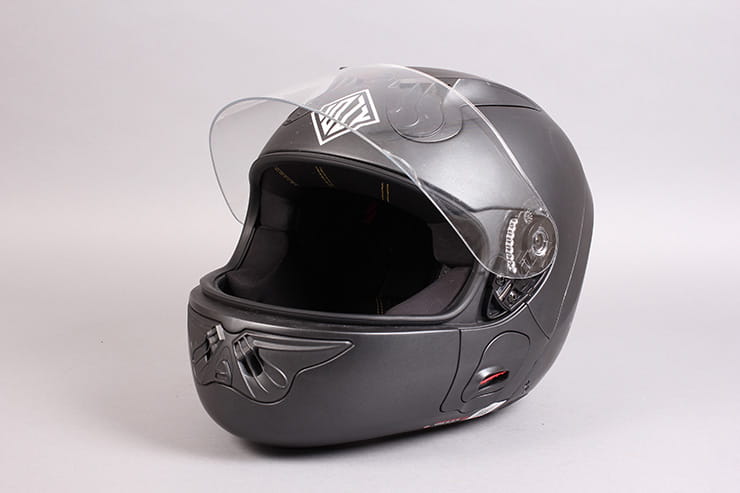 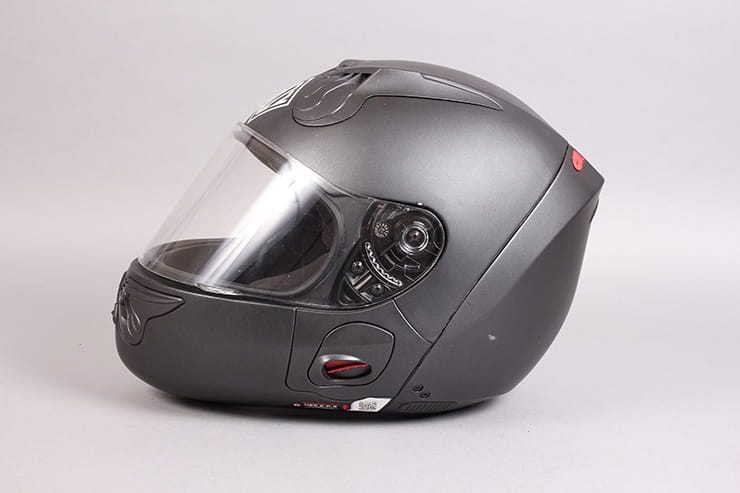 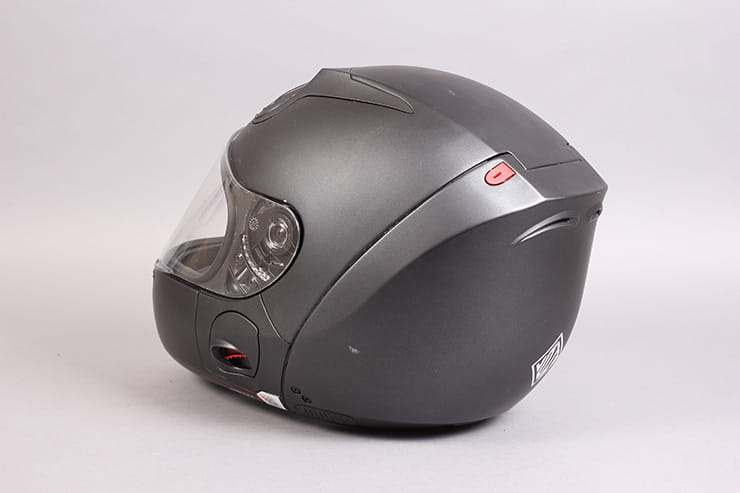 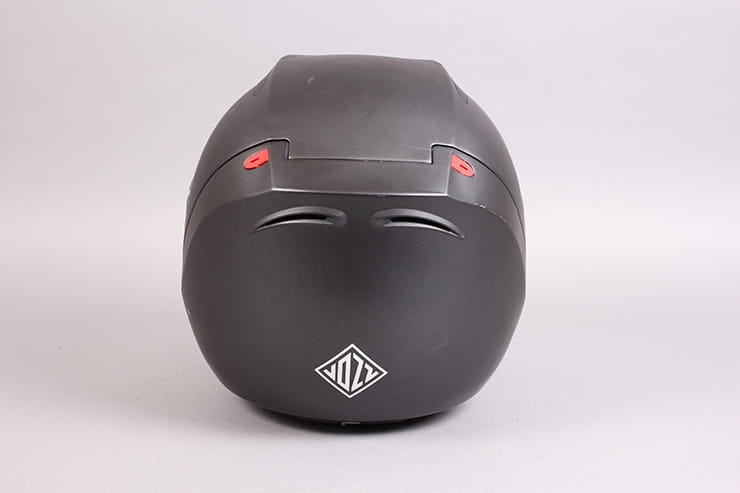 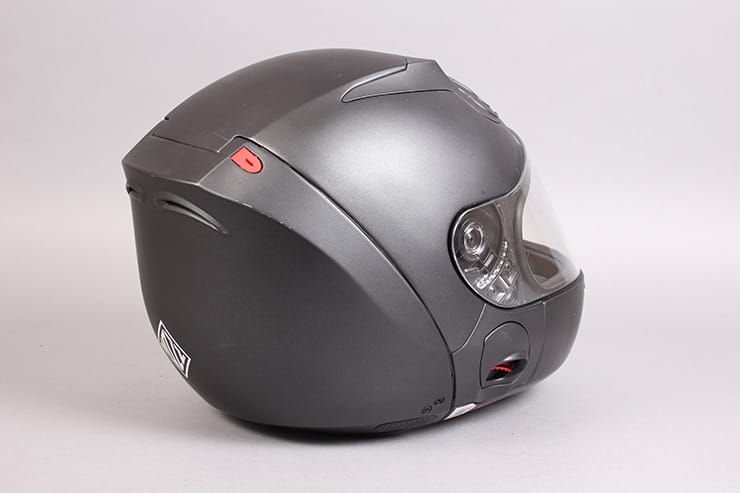 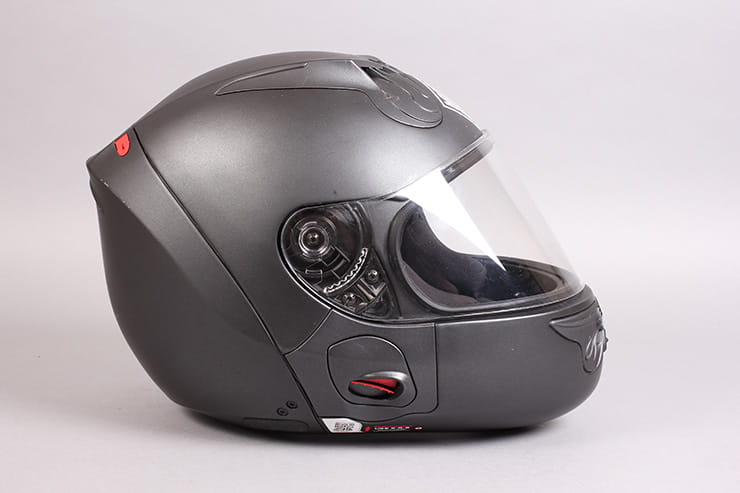 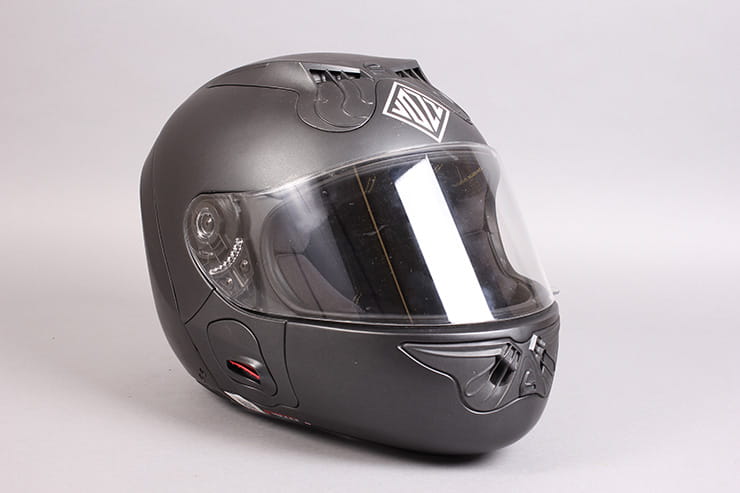 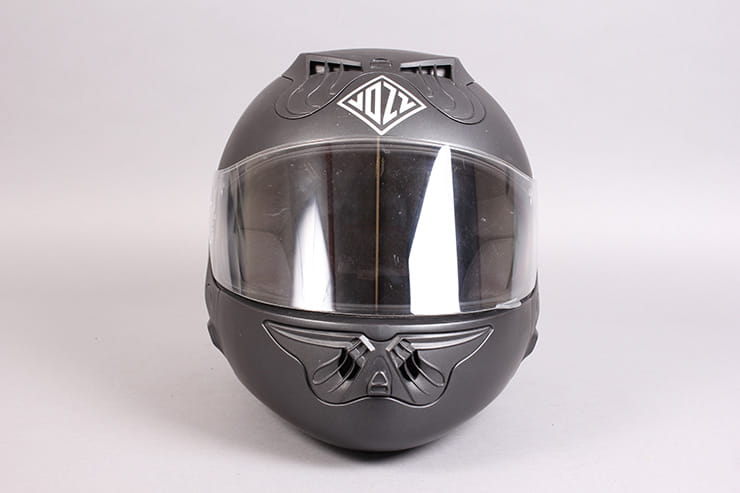 The Vozz helmet is a unique design, opening fully from a hinge at the top, meaning it can be removed easily by the emergency services in the event of an accident, without disturbing the spine. I’ve been using it for six months now – in all weathers – so have had a real chance to get to grips with it since my first impressions at the launch.

It’s important to note that this is not a typical flip-front lid – it’s a completely new design that offers an unparalleled safety advantage, though due to its fastening method, it can’t be ridden in while open… 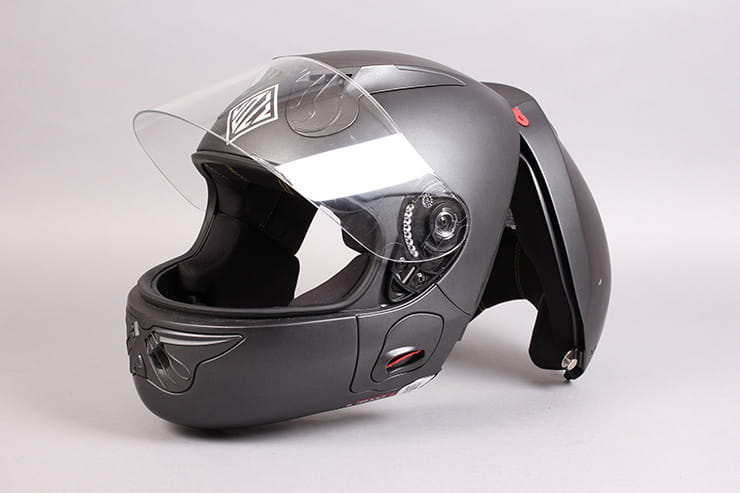 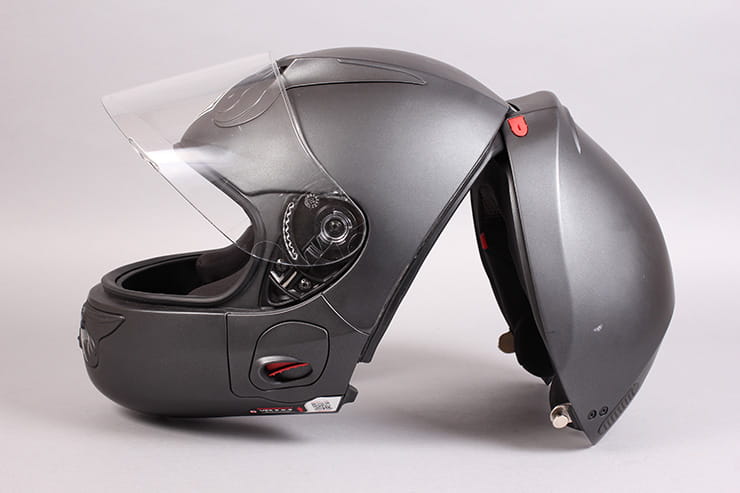 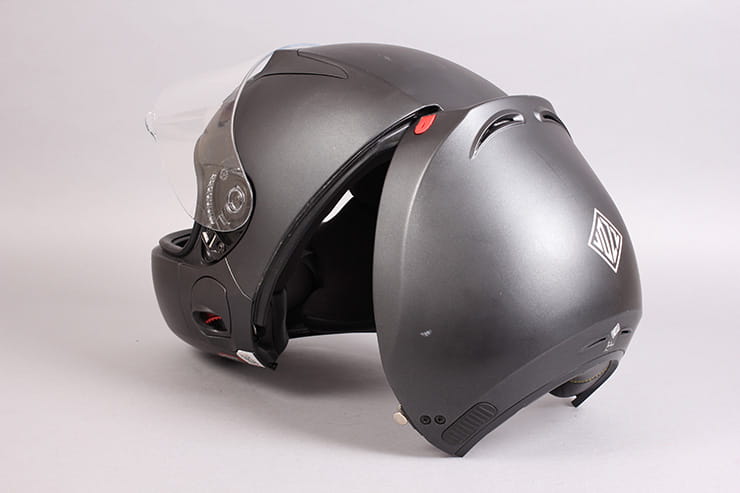 Most modular – or flip-front – lids with a composite fibre shell have a polycarbonate chin piece. In the case of the Vozz, the front is the largest section, and made of a Kevlar / carbon-fibre composite; the rear is ABS.

There are three shell sizes across six sizes – XS and S, M and L, XL and XXL. The helmet I have  is a matt metallic black finish, which is well applied, with attractive details in the red anodised aluminium side latches.

Specified as 1680g, this large-shelled helmet tips the scales at 1725g, which compares to 1629g for an Arai Quantum ST full face, 1679g for a Shark flip-front and 1691g for a Shoei modular lid with intercom. While on the weightier side, the Vozz doesn’t feel particularly heavy in use, and good aerodynamics mean there’s no noticeable additional drag adding to it.

The chin and top vents are each operated by a small on/off switch. These can be operated with winter gloves, though they are a little fiddly. Neither has a huge impact, though when riding in the hot weather the lid still feels quite airy.

In winter, it can feel a little chilly, mainly due to a slight draft around the ears, and also around the chin. This means the helmet isn’t too prone to fogging issues, but it’s not as warm as some others, like the new Shoei Neotec II, so perhaps a consideration if you’re riding in winter. 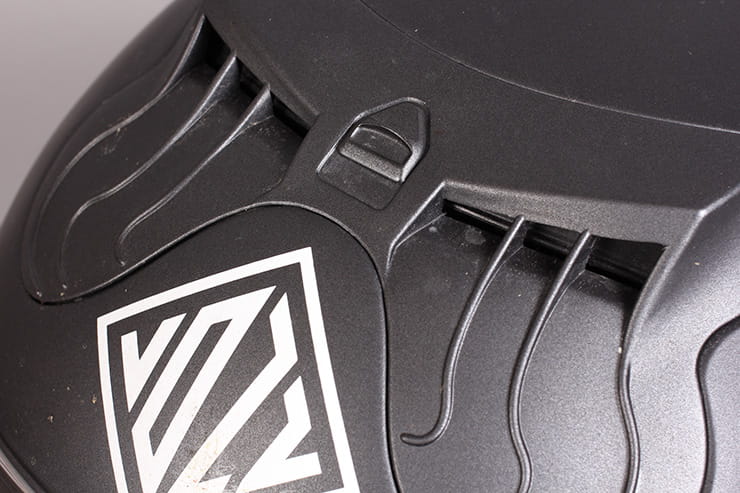 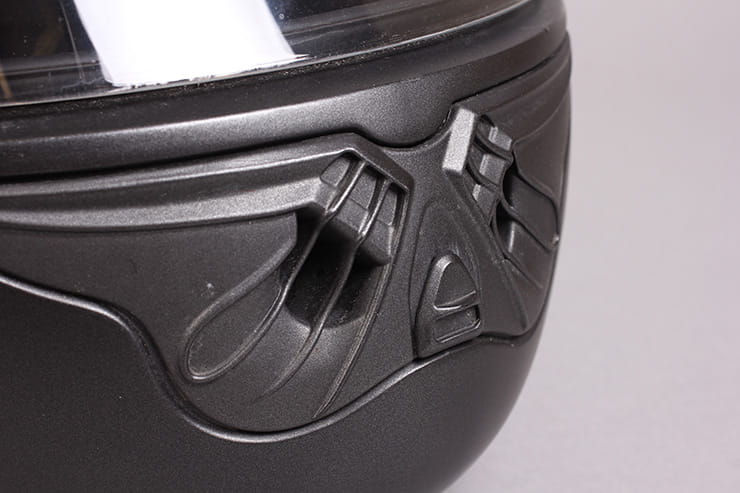 There’s no Pinlock insert at the moment, though Vozz is looking at adding one on a replacement visor. However, like some other helmets, there is an anti-fog coating applied to the inside. This is effective, and with careful cleaning appears to be lasting well.

In severe, cold rain though, I have needed to ride with the visor at its first of six ratchet stages, where it can become waterlogged in the worst weather. This is compounded by wearing spectacles, but I have found the overall airiness of the Vozz means my glasses don’t mist quite as rapidly as on some helmets; it’s a shame there’s no way to crack the visor slightly open.

Removal and refitting is very easy, with no tools needed. Peripheral vision is good thanks to the large aperture, and with no Pinlock adding an extra layer of plastic, the view is very clear.

There’s a small amount of distortion at the very bottom of the visor, but it’s something I soon forgot about, and only noticeable when looking very low. 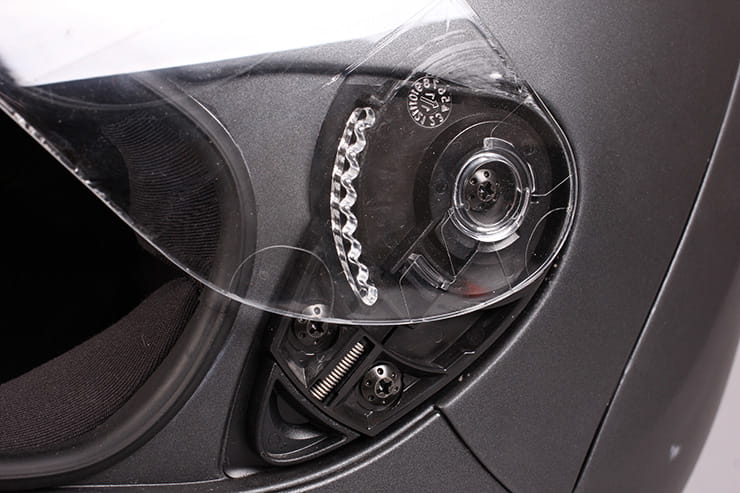 Only the cheek pads and chin cup are removable, so cleaning will require you to carefully wash the whole helmet and allow it to dry naturally. Overall, it’s comfortable and hard-wearing. 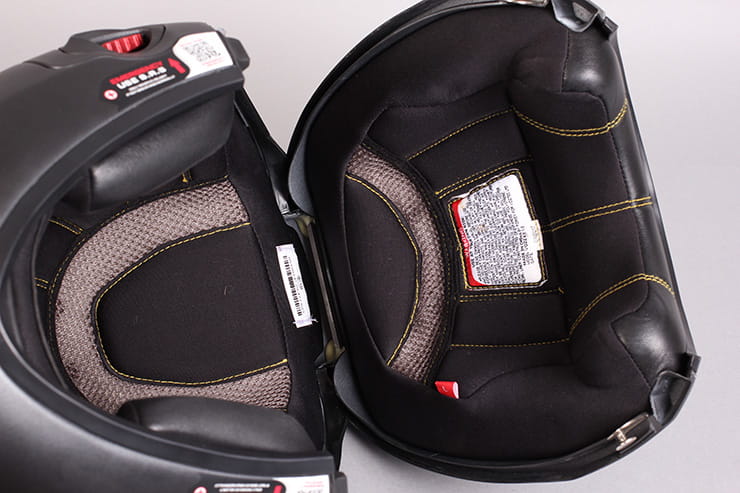 To put the Vozz on, you hold it at either side, put your head into the front, resting your chin into the cup, then clip the rear into place. It’s a very positive system, and even in winter gloves I haven’t had any false-latches.

There’s no strap – when you buy the lid, the chin cup is adjusted to suit your face, and the cheek pads can be swapped between different sizes. It’s easy to adjust the cup yourself, but fitting is important to ensure it’s secure.

Once on, the Vozz doesn’t move about, though the cup does start to feel a little restrictive after a long ride – you can’t yawn with it on. It’s fine to talk, and you grow more accustomed to it over time, but it’s quite a different feeling to a traditional neck strap.

It’s worth noting that those with long hair will need to keep it pulled back – one of our team got hers caught in the mechanism when trying it on. 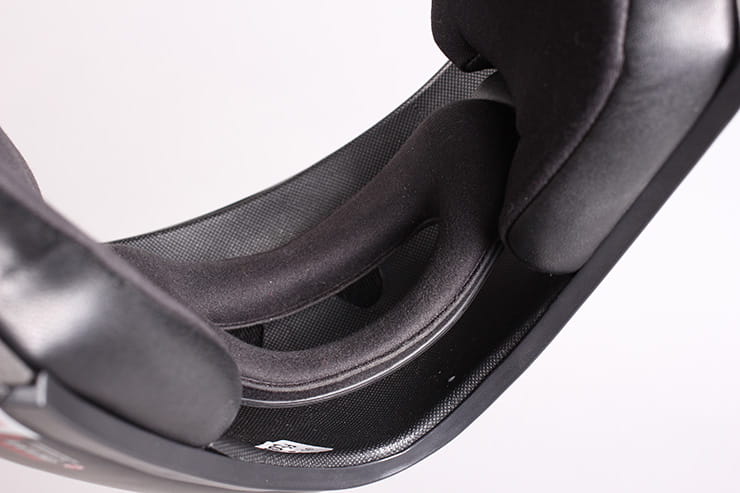 As always, fit is extremely subjective, but once set up, I found the Vozz very comfortable, thanks to the fact it’s designed to hug your head, rather than squeeze over it. However, over time I’ve found that my short-cropped hair gets pushed backwards – against the grain – when fitting. It leaves it looking a bit odd after a ride, and slightly uncomfortable for a while. Other head shapes and hair styles will be completely different, so I wouldn’t let this dissuade you from trying one.

I have found though that my glasses tend to be pushed hard onto my nose by the Vozz – it’s great that I can put it on while wearing them, but the design puts pressure on the bridge of my nose, and they often end up a little skew-whiff. Again, this will vary significantly depending on the shape of your head – and spectacles – just keep it in mind when trying one on. 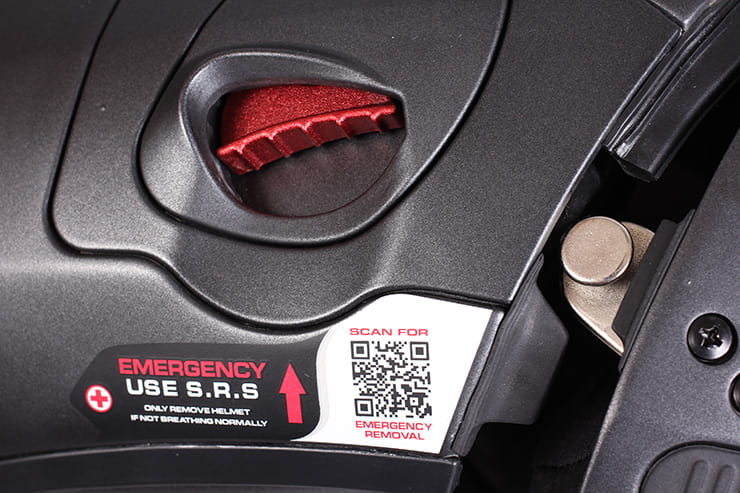 First impressions of the Vozz are that it’s extremely quiet – due to the fitting method, the shell wraps more around your neck than any other lid. It’s certainly less boomy than most helmets, with a more rushing sound as the wind passes over, though I would still recommend wearing ear plugs.

Due to the design of the Vozz RS 1.0, fitting an intercom was always going to be tricky. I managed to get an Interphone on the front section, but did find that the positioning – which is limited as of course you can’t put it behind the split – restricted my hands, making it harder to close the shell. I also fitted a NuViz to it, which is designed to go on the front, but this did still cause issues with closing.

Another problem with an intercom is running the cables to the opposite side’s speaker – the best method I could find here, with no removable skull cap, was to tuck it under the inside edge of the lower visor aperture seal. This wasn’t ideal, and it did tend to pull out, but it gave me the option of comms in the Vozz.
There’s no cutaway for speakers, so the only way is to tuck them behind the cheek pads, though this does press a little on the ears, and the foam impedes the volume. Ultimately, the Vozz really isn’t an ideal helmet if using an intercom is important to you. 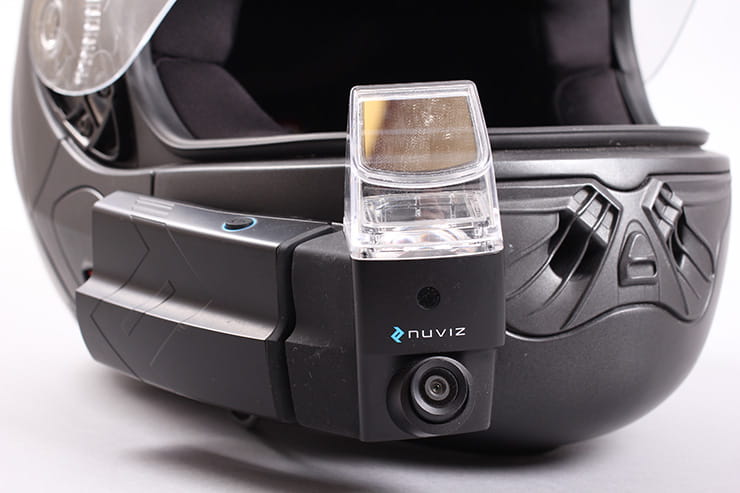 The Vozz isn’t for everyone – there are elements to its fit that some might find too alien. But approach it with an open mind and it’s got a lot of benefits, not least the excellent safety in the event of it needing to be removed after a crash.

While it is of course an ECE 2205-approved helmet, the Vozz hasn’t been tested by the government-funded Sharp scheme. Helmet 28, the European importer, tells us this is due to it being effectively a custom fit, but it’s unavoidable that many potential buyers will be looking for reassurance that this design will be truly safe and secure; we’ve proposed a video test and will update you as soon as possible.

The Vozz really brings something new to motorcycle helmets – it’s got real potential to save lives should the worst happen, and with the importers looking to introduce it to motorcycle racing, we expect to see it continue to gain fans looking for something truly unique.

I tried the Vozz after John, using it for my 77mile commute. Unfortunately, I did suffer from some pretty bad misting in the pouring rain, so I think a Pinlock would help.

Maybe I’d get used to it a bit more, but I didn’t like the way I couldn’t clear my throat easily, due to the chin-cup fastening system, and got home with a bit of a headache (though this could well be the lid being more suited to the shape of John’s head than mine).

I do see the safety benefit of a helmet that can be removed without having to drag it off a potentially injured rider’s head, but I wish it could have been done with a traditional chin strap.

The Vozz helmet was designed in Australia by John Vozzo and Mark Bryant – two skydivers who wanted to create a safer lid for parachutists. To make it a viable commercial proposition, they expanded it to the much larger motorcycle market.